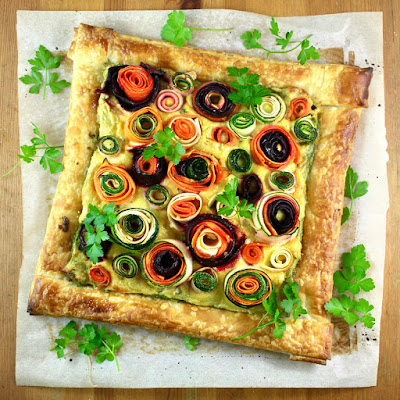 It was so pretty!  Who could resist those curly vegetable roses!  Not this little black duck!  I was onto it within a week of reading the Coles Magazine.  The difference in my recipe from the one I first saw was that it had a vegan cream instead of an egg and cheese mixture.  I also added zucchini to my roses which added some nice colour.  And I made less roses because this was a really time consuming tart. 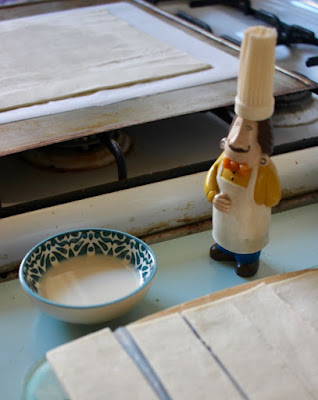 Using puff pastry for the base is wise because I spent enough time on the roses that I didn't have much energy leftover for other components.  Slicing vegetables into strips with a vegetable peeler took ages.  I thought I should wait til the puff pastry was cooked to start but I took longer on the slicing the vegies took even longer. 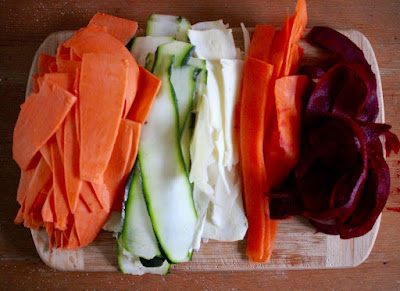 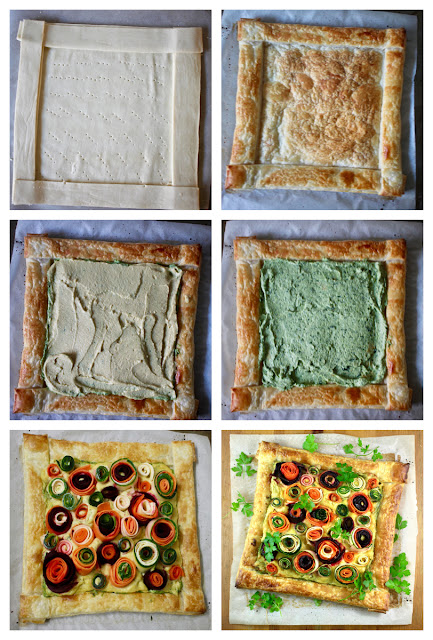 I had planned to make this on a relaxed weekend because we didn't have much planned.  Yet even on a quiet weekend we were busy enough with housework, grocery shopping and chatting with neighbours.  So I didn't start on this as early as I intended. 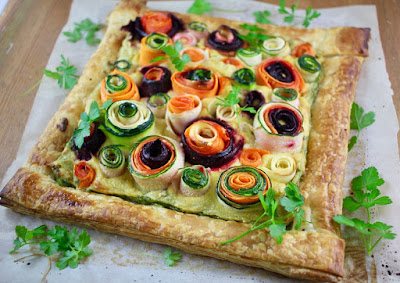 This is not a good tart to make when you are pushed for time.  It is quite time consuming.  So by the time I had taken the tart from the oven, photographed it and tasted it, it was too late to decide to return it to the oven despite the vegies not being cooked enough.  I still don't know how to test the vegies for cooked.  Definitely not with the eyeball.  But I was not surprised because I have had lots of problems baking any dishes in the oven with raw and thinly sliced vegies.  Perhaps it is my oven or my baking style.  If anyone has tips they are welcome.  And despite the vegies being undercooked, I would make this tart again because I loved how it looked as well as finding it quite tasty.

This post is part of Vegan MoFo 2018 this month.  I noted in the last post that my computer is not working.  I hope I now have a solution and can spend a bit more time on Vegan MoFo.  Stay tuned folks!

Lay one sheet of puff pastry on a baking paper lined baking tray.  Cut the other sheet into 8 strips.  Place four strips on each side of the square of puff pastry and repeat with the remaining strips.  Brush soy milk onto each strip before laying it down.  Brush milk over the top strips.  Prick the base with a fork all over.  Bake at 200 C for 20 minutes until light golden brown.

While the pastry bakes, take a vegetable peeler or mandolin and cut into thin slices.  This took me quite a bit of time.

Once pastry is baked, cool slightly and press down a little if it has puffed up inside the edges.  Spread with cashew cream.

Roll up pieces of vegetable to make roses and press into the cashew cream.  The vegie strips should not be too wide so if they are, they should be cut in half.  When you have made a rose, before pressing into the cashew cream, it might be good to trip it if it is too big or has large bits hanging down.  Make roses different sizes and having different vegies in roses.

Bake for 20 minutes or until vegies are tender.

NOTES: After 20 minutes my vegies weren't cooked enough but I am not sure how long would work or how you tell.

On the stereo:
A short album about love: Divine Comedy