In My Kitchen: September 2018 - the Vegan MoFo edition 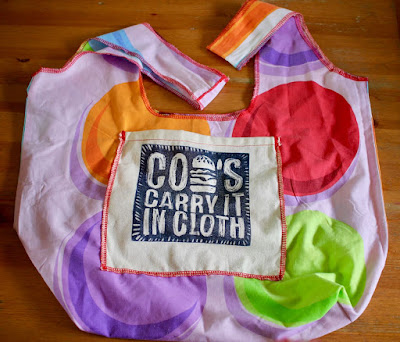 September finds us in interesting times.  I am happy to welcome Spring and longer days.  The political system I greet with less enthusiasm and more wariness.  Last month we had another Prime Minister deposed by his own party.  Prime Ministers being knifed in the back by their colleagues is getting so frequent in Australian politics as to be embarrassing.  And Coles supermarkets will have a second go at banning single use plastic bags after a backflip.

Closer to home, it seem nothing short of a miracle if you are reading this.  I had my blog hacked twice in August (1st it was a matter of changing to the url from http to https and second time it was a third party widget).  Then September commenced with my computer battery being shorted by an imitation Mac phone/ipad charger and me having to reboot the SMC (this is technical terminology I am not usually using but having to google the flicking power cord light led me there).  This is not helpful in a month I have committed to blogging at least 20 (vegan) posts for Vegan MoFo.

So let's have a look around my kitchen.  Above you can see a reuseable cloth bag from Coburg Farmers Market.  The "Coburgers carry it in cloth" print is really cute!  And practical.  I have been using it for groceries. 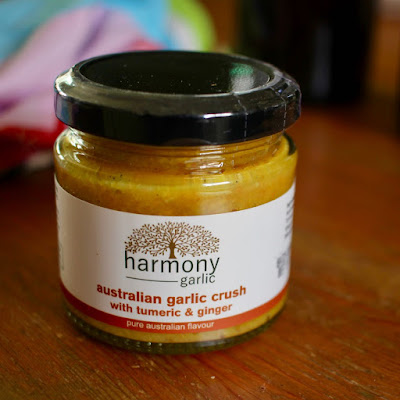 I also bought this garlic, turmeric and ginger paste at the Coburg Farmers Market.  It smells amazing when I add to a stew or curry. 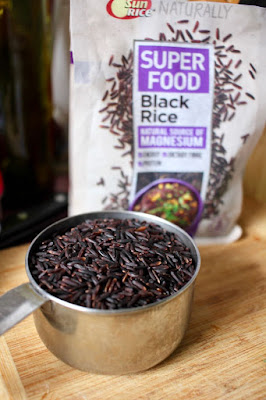 I was intrigued by this black rice.  It is really pretty to serve.  I mixed it with basmati in my recent tofu marinade bowl. 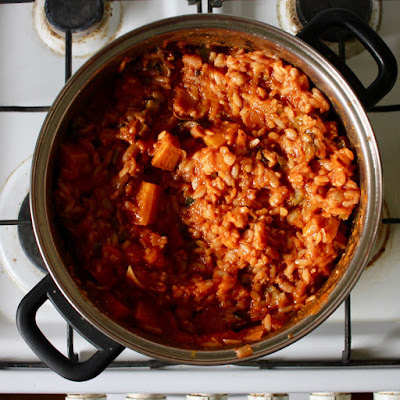 I made this stew during the week.  Actually I made two stews.  I started with a plain tomato sauce with carrots and zucchini.  Then I divided it.  To one half I added corn, kidney beans, red pepper, smoked paprika, oregano and cumin.  That made chilli non carne to eat with rice.  To the other half I added seeded mustard, oregano, worcestershire sauce, vinegar, stock powder, pumpkin, cabbage, mushroom, cannelini beans, chickpeas and some risoni.  The second half is above.  The stews lasted a week with about 2 nights left in the freezer for next week.  And I used up most of the vegies in the fridge. 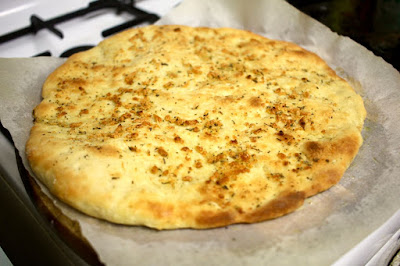 Last night we had a cup of stew with some garlic pizza.  Not the garlic pizza in the photo but a similar one.  I have been in the mood to bake garlic pizza lately so maybe will post a recipe some time, perhaps once the daylight lasts longer for better photos.  The one above was based on this vegan garlic bread pizza that just used lots of oil, garlic and salt on top of the pizza. 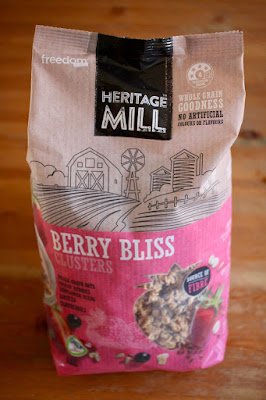 In the mornings I have been enjoying this Heritage Mills Berry Bliss Clusters muesli.  I usually eat it with yoghurt but sometimes just by itself.  It is very tasty and I love the dried berries in it.  We have tried the apple crumble and I think there is another berry variety.  I still miss my own chocolate muesli and would like to return to that if I get a bit of motivation to make it. 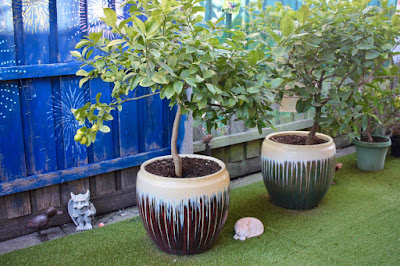 My garden is a bit straggly lately.  I barely got any fruit over winter, which is very unusual for my lemon and lime trees.  At least they still have plenty of leaves.  And I might have had a few limes if I hadn't gone a bit overenthusiastic with pruning off the gall wasp. 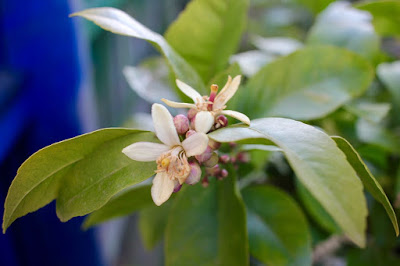 So I was excited to get some lemon flowers.  Hopefully that is a good sign there might be fruit on the way. 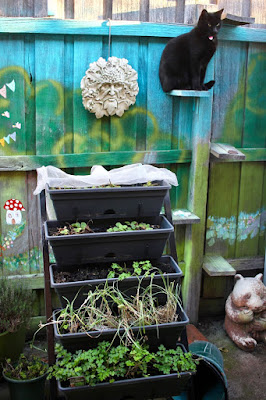 I really love my planters in the yard.  The strawberries are quiet and I will buy some more basil plants for summer.  My big win here was that my parsley is doing so well in the bottom planter it has started to jump into other planters for the first time.  For years I have tried to grow parsley with no success.  So this seems a bit achievement.  I just hope it will give way when I buy more basil plants.  Hopefully Shadow the Cat God will watch over the garden from the top of his steps. 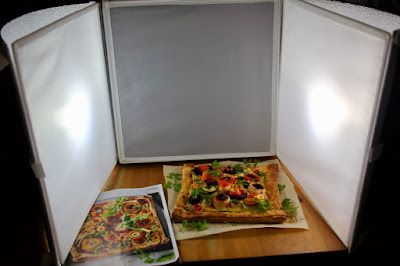 I am really pleased the days are getting longer.  During winter it is hard to find time with natural light for food photography.  I sometimes take photos of leftovers the next day if I have the leftovers and the time.  Occasionally I get out this Optex Portable Photo Studio and Lighting Kit.  I like the kit but it is a bit fiddly to set up if I am rushing around getting dinner and trying to get Sylvia into bed. 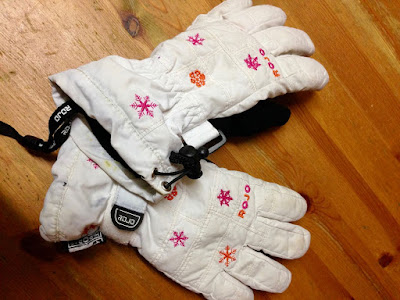 There is still a pair of snow gloves hanging around my kitchen.  I borrowed these from my sister-in-law (thanks Erica) for my work retreat Harrietville/Mt Hotham last weekend.  It was so cold especially on the first day that I was really pleased to have them.  The trip wasn't big on vegan food so I might write about it in October after Vegan MoFo. 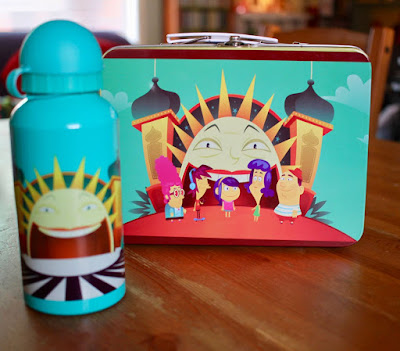 While I was away Sylvia took her dad to Luna Park for Father's Day.  He was very pleased he got a free ride pass and a free hotdog as a Father's Day special.  She brought home this lunchbox and drink bottle.  The lunchbox is a retro tin box and the drink bottle is metal with a plastic top. 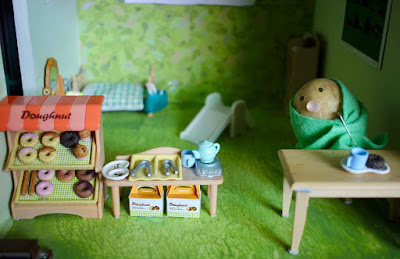 While I was away, Sylvia made sourdough fast track pizza for Father's Day.  She was very proud of herself.  So when I got back she said she would help with dinners and got as far as cooking vegie sausages under the grill and helping to scrub potatoes until she took up with her pet potato and got sidetracked making up his room and doughnut bakery in the dolls house.  Yes that is a potato wrapped in a green cape in the photo! 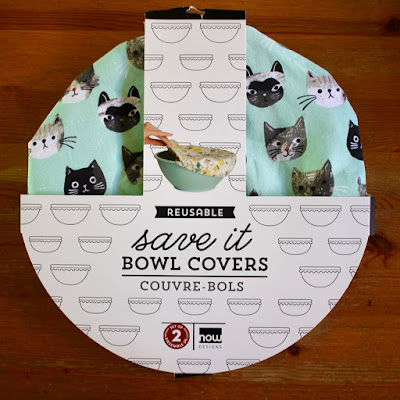 Lastly, I have this set of two bowl covers.  Sylvia rang while I was away to check I wanted these.  It was very kind of her and E to buy these for me.  They are like shower caps for bowls.  She knew I had been looking for an alternative to clingwrap to cover my bread dough.  I am planning to put on some bread tonight so will be interested to see how they go.

I am sending this post to Sherry of Sherry's Pickings for the In My Kitchen event, that was started by Celia of Fig Jam and Lime Cordial,  If you would like to join in, send your post to Sherry by 13th of the month.  Or just head over to her blog to peek into more kitchens.

This post is part of the Vegan Month of Food (Vegan MoFo) in September 2018.  Go to my Vegan MoFo list for more of my 2018 Vegan MoFo posts.