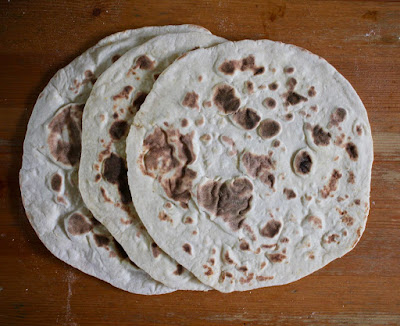 It started with a manky banana.  I don't always use bananas as I intend and then they mock me as they just make everything in the fruit bowl ripen too fast.  A few bananas can make a banana cake but sometimes I want savoury not sweet.  And I remembered Janet of TasteSpace making banana naan many moons ago.  But the naan take too long for the yeast to rise and I am always looking for ways to use my sourdough starter so I put the banana in my sourdough flatbreads. 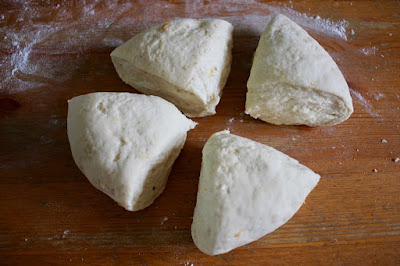 The was definitely the path of least resistance.  I make sourdough flatbreads often enough that all I had to do was use banana instead of water.  My starter was quite stiff, having been fed recently.  Even so I needed more flour than when I usually make flatbreads with water.  You could of course only use 1/2 a banana and less flour if that is all the banana you have (as Janet did). 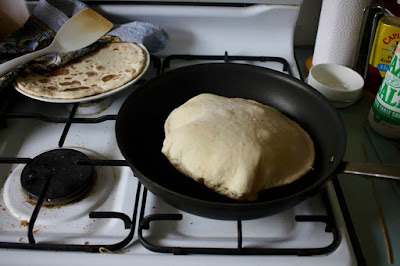 It is always fun to see the flatbreads puff up as they cook.  Usually I press the eggflip on it to bread the bread and let the steam out but I had a skewer nearby and used this instead which worked quite well.  I have never let the flatbreads just keep growing.  What would happen if I did?  Would it deflate itself with a neat hole?  Would it explode over the kitchen?  Or would it just float to the sky like a balloon?  I must find out one day. 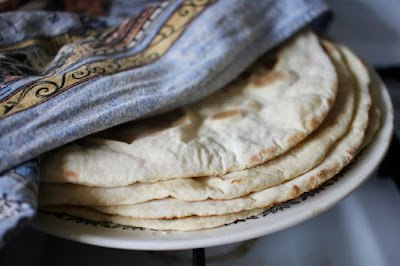 The result was slightly sweet but not too sweet to eat with salad or stew.  I wrapped up some cauliflower salad and also served it with lentil stew and rocket (below). 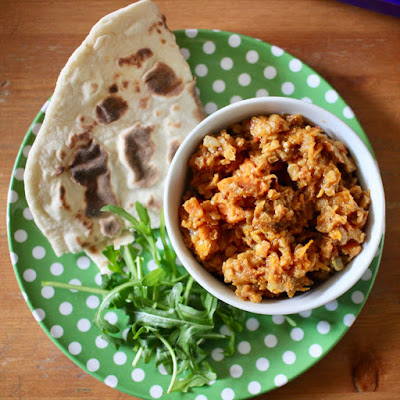 The beauty of the slight sweetness is that it also works as a dessert bread.  We had it with nutella but it would work with other sweet nut butters, jam or spreads.  You could even add in fresh banana and choc chips.

Mix all ingredients.  It looks quite too shaggy and dry.  Knead and it should come together into a smooth - albeit fairly firm - ball of dough.  Cut into four.  Roll out each portion into about a 0.5cm thick oval on a lightly floured board .

Heat a heavy based non-stick frypan over a high heat.  Place a disc of dough onto the pan.  Heat for a few minutes or until it balloons up and brown spots appear on the other side.  Flip over, flatten with an eggflip or spatula and fry another minute or two until you have some brown spots on the other side.  I tend to brush out the flour from the pan (with a kitchen towel) before frying the next one so it isn't covered in burnt flour.  Cover with a teatowel when warm to stop from drying out.  Best eaten on day of frying.

On the stereo:
Pocket Symphony - Air