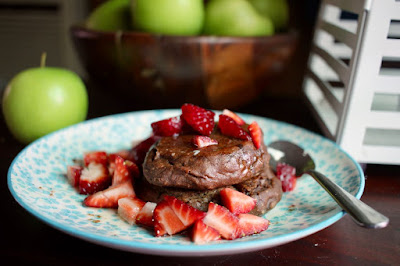 We have had a really lazy morning today.  I am most grateful to Daniel Andrews for declaring a public holiday the day before the AFL Grand Final.  Footy is not really my thing but when you have had a busy week at work of an average 10 hours a day, a public holiday is indeed a godsend.  Sylvia and I have just watched tv and eaten chocolate pancakes.  Now that she is at a birthday party and E is at the MCG with my dad and brother, I have some time to relax and blog. 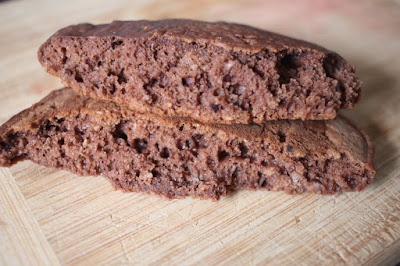 I really loved the pancakes, based on a favourite pancake recipe.  I didn't mean to make chocolate pancakes but when the only milk in the house is a chocolate one, there is not much choice.  They weren't very sweet.  They were great with maple syrup and strawberries (chopped up to make sure we didn't get any that maniacs have been putting needles into recently in Melbourne).  These would work well as a dessert with a rich chocolate sauce and lots of berries.  I would have loved one of the cooled ones spread with peanut butter but when we had no plain milk last night so I put the last of the peanut butter in my tomato soup.

You might notice from this last comment that there has been no fancy cooking and no grocery shopping over the past week.  I am on holidays for almost two weeks so I have a chance to catch up.  How lovely to have some time to potter around the house.

Mix all ingredients (except margarine) to make a thick batter.  Let sit 5 minutes.  Meanwhile heat frypan over medium heat.  Rub a little knob of margarine to cover the pan.  Drop heaped dessertspoons of batter on the pan.  It takes quite a while (5 minutes or so) until bubbles appear.  It should be golden brown.  Flip over and cook another few minutes until browned on the other side too.  Repeat with remaining batter.  Makes about 16-12 small pancakes.

NOTES: We used Vitasoy chocolate milk.  It is not overly sweet.  Either were the pancakes but were great with maple syrup and strawberries.  Next time I might add some walnuts as well.  I misread my recipe I adapted this from and used 1 1/2 tsp baking powder rather than 1 1/2 tbsp but it seemed nice and fluffy.  The pancakes were a bit firm around the edges but lovely and soft once cooled.  If you needed something to take to someone's house they would be a fine offering with a lick of butter/margarine and jam, if made on the same day and kept small like pikelets.

On the Stereo:
Fin de Siecle: The Divine Comedy

This post is part of the Vegan Month of Food (Vegan MoFo) in September 2018.  Go to my Vegan MoFo list for more of my 2018 Vegan MoFo posts. (I had plans this week to have Out of the Kitchen as the theme but with the amount of energy I have had this week I am just pleased to post anything!)
Posted by Johanna GGG at 13:50