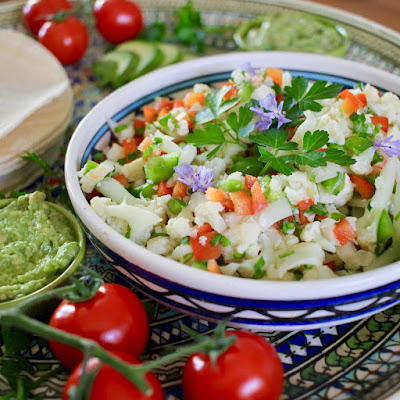 Today was a glorious spring day of 24 C when you want good fresh food that doesn't take too much effort.  Ideally you are out walking through sun kissed fields with a gentle breeze in your hair.  In my case, I am just busy hanging the sheets on the line, catching up for coffee with friends and going for a swim in the indoor pool.  These cauliflower ceviche tacos were an excellent way to end the day.

When I started preparing for the Vegan Month of Food (Vegan MoFo) this month, I decided I didn't want to follow the daily prompts - too restricting - but that I would give myself weekly themes to reflect the Vegan MoFo themes.  Then my computer wouldn't open in the first week and my plans fell in a heap.  However I have still had some vague weekly themes.  The first week it was colourful food.  This week I am doing vegan substitutions. 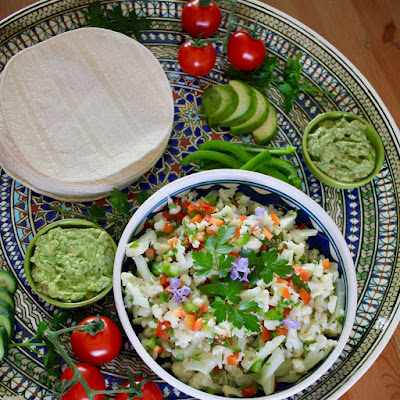 I tell you this as an introduction to Cauliflower Ceviche.  I didn't actually know what a ceviche was.  But then I saw Anna Jones's recipe for cauliflower ceviche tacos in the Guardian online on the weekend.  I knew her recipe wasn't quite right for me so I googled it and found that ceviche actually relates to a raw seafood dish.  (I am not sure I have ever eaten seafood in my life and it holds no attractions for me despite many people thinking I must eat it or miss it.)  So I realise I have no idea what the traditional ceviche tastes like but I suspect I would much prefer the cauliflower version.  If you are a traditionalist and cringe at using the term ceviche, then pickled cauliflower tacos would probably work too!

I grew up with a very narrow idea of tacos.  They had to have crisp tacos with chilli con carne, tomato, lettuce, cheese, sour cream and guacamole.  Blogging has opened my eyes to all the different sorts of tacos out there.  This taco recipe is so different to any I have had before and oh so amazing.  The cauliflower mixture was a bit tart and spicy when I first mixed it together but after sitting for a while the flavours mixed and settled into something really tasty and less confronting.  I didn't use raw onion which is not a favourite of mine.  Instead I used some baby leeks (very similar to chives) from my garden and some capsicum or pepper for a bit of crunch. 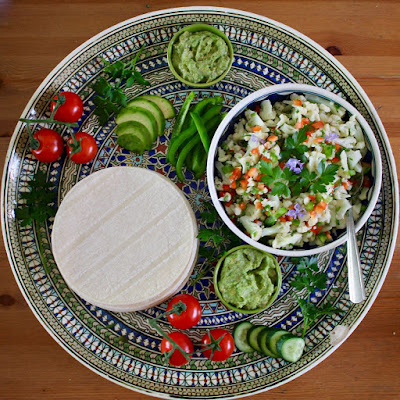 We don't often have corn tacos but Anna Jones used them so I decided I would too.  I love their flavour but they are slightly more fragile than their wheaten cousins.   Anna Jones dry fried her corn tortillas but I was in a rush and decided to microwave them.  Following the instructions on the package (40 seconds for 12 tacos) was a nightmare.  They tasted stale and ripped easily.  I remembered cooking these corn tortillas with my mum.  I had been surprised that the recipe to said to microwave each tortilla for 30-45 seconds wrapped in damp paper towels.  So I tried this and the tacos were great.

I prepared most of the meal during the day so when I came in with Sylvia from her swimming lesson,  there was very little to do for dinner.  Anna Jones suggests some edible flowers for Mexican colour and spirit.  All I had in my garden were purple rosemary flowers so I added these.  It wasn't a meal for Sylvia but she enjoyed eating some tortillas and cheese with some veg on the side while we tried to eat our tacos neatly.  Of course it was a mess but tacos are always fun and sociable ad a perfect way to welcome warm spring weather.


I am sending this dish to VegHog (and Shaheen) for Eat Your Greens.

To make the cheviche:
Steam the cauliflower for about 2 minutes or until it still had a slight crunch.  Immediately cool under cold water.  Drain well.  Mix with remaining ingredients.  Sit at least 30 minutes at room temperature (I think mine was left about 3 hours.)

For the tacos:
First mash the avocado and mix with lime juice and salt.  Set out with ceviche, and tomatoes.  Now heat the tortillas.  To make the corn tortillas soft and flexible microwave wrapped in damp paper towels for 30-45 seconds.  They will be unbearable hot when straight out but will cool quickly and be good to smear some avocado, top with tomatoes and ceviche and wrap up to eat with fingers.

On the Stereo:
The Greatest Showman soundtrack