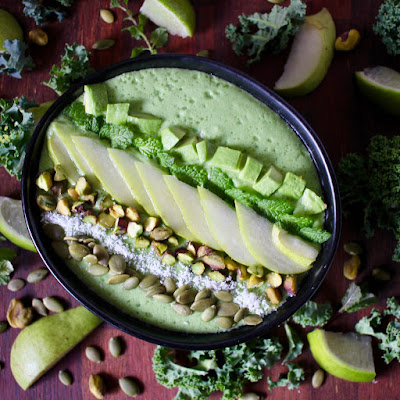 My computer is still broken.  Sad face.  So I am not on FaceBook or FoodGawker or my online calendar or downloading photos.  All I can do is catch a steal some time on others' computers and keep posting here.

I am really grateful I spent time drafting blog posts for Vegan MoFo or I would just have to bow out gracefully.  As it is I have enough drafts to keep me going a while and to hope my computer might get fixed.  I had thought it was a battery charging problem but now I think it might be a dodgy charging cord problem.  Still searching!

Meanwhile I can share this Green Smoothie Bowl.  Once I tried my first smoothie bowl recently I was taken with the idea of a green version.  And I made one on a crazy day of baking for Vegan MoFo before running out the door in a rush without time to try the smoothie bowl.  I left it in the fridge with toppings and had it when I returned a few hours later.  It was really good.  I imagine it would be particularly great cold like this in summer.

I loved the smoothie but it was quite light and not overly sweet.  Afterwards I found two halves of a banana.  Only then did it dawn on me that half a banana had been destined for the smoothie but overlooked in my hurry.  I had also forgotten to buy kiwi fruit which I would have liked to include.  I added the banana in the recipe below because I feel this would make the sort of smoothie I was after but you could make it without banana too.  I would have liked a greener smoothie.  Perhaps more greens would improve the colour.  Quibbles aside, I was glad to try this and hope to return to the green smoothie bowl one day.

This post is part of Vegan MoFo 2018 which I am participating in during September.