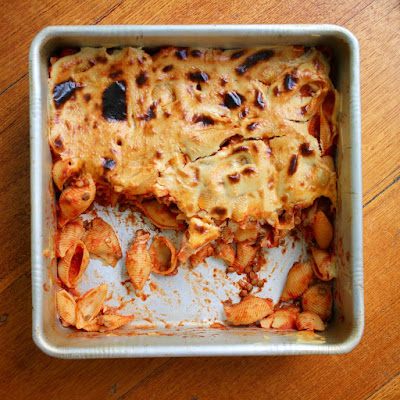 Today I bring you a pasta bake I made a few weeks back which is embarrassingly easy but it worked so, hey ho, let's share!  It is one of those dishes I never intended to share but enjoyed so much I thought, why not!  By then my photo options were limited.  Hence not much photographic evidence of its goodness!

I first made the tomato pasta sauce (similar to marinara sauce in the USA but I don't use this term as here in Australia we have spaghetti marinara with a tomato sauce with seafood in it).  I fried some onions and garlic, added 750g jar of passata, a drizzle of maple syrup, few drops of worcestershire sauce, seasoning and that is about it.  My 9 year old loved it because I blended it to be plain and smooth.

The next night, I had some cashew cream so decided to bake it with the cashew cream and throw in a tin of lentils.  It was simple and delicious but too complex for my 9 year old.  However it was decidedly easier than any other vegan pasta bake I have made.  In fact the cashew cream is easier than a traditional cheese bechemal sauce so it is likely to be repeated.

Cook pasta according to packet.  Drain and mix with tomato sauce and lentils.  Tip into a shallow 22cm square tin or a slice tin (which might be my preference next time).  Either bake at 200 C for about 20-30 minutes until brown spots appear or if pasta is hot, heat under grill (aka  broiler) until brown spots appear.  Keeps well in fridge for leftovers for a few days.

On the Stereo:
Something Else: Brian Jonestown Massacre