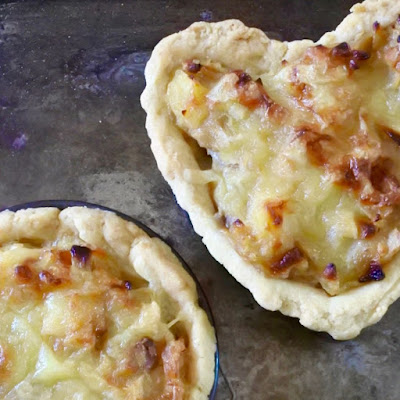 When I landed in London for the first time 20 years ago, I remember the joy of the wholesome vegetarian meals offered at Cranks Covent Garden restaurant.  I can only remember eating the sausage rolls there but I wanted to eat it all.  As a vegetarian, it was a wonderful place to discover.  It still pains me to think that this Covent Garden shop is no longer there, even if I too have not been in London for a long time.

Homity pie is one of those classic old-school 1970s vegetarian recipes I have always meant to try.  Choclette mentioned it in her memories of Cranks recently.  Suddenly I had a hankering.  And there were potatoes needing to be used.  Plus one last lonely egg and some gouda cheese in the fridge. 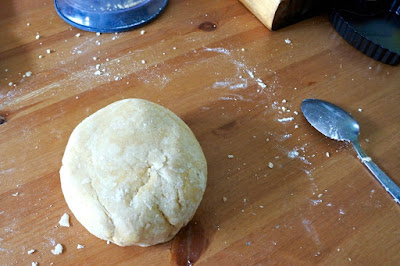 Lately life has been busy and I haven't been cooking or cleaning as much as I would like.  If I have spare time it is one or the other.  Usually cooking takes priority.  So I was pleased when baking these pies (and a cake) that a visiting neighbour commented on how cosy the house was.  It made me think perhaps I can get away with a bit more mess if the house has the homely smells of cooking. 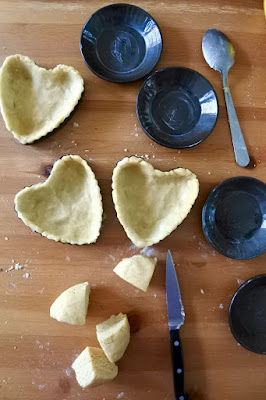 I kept the pies simple so they might appeal to Sylvia.  No seeds or smoked paprika or herbs.   Sylvia has not been terribly adventurous in her eating with all the upheaval earlier this year.  But as things calm down, I am pushing her to try new foods a bit more.  Firstly was a homity pie.  Just a few mouthfuls.  She picked it apart until there was a mess on her plate and not much eaten.  She had a meltdown over the onion.  I was tempted to finish her dinner there and then.  But I breathed deeply and took her to her room to calm.  When she came back she ate most of half a small pie.  It did help having cake for dessert!  She has also eaten small amounts of roast pumpkin and kale salad this week! 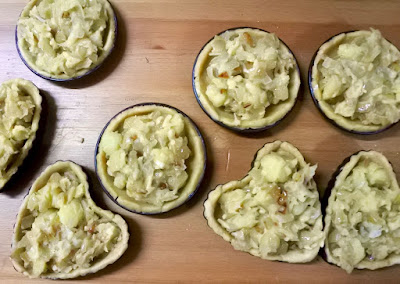 I used vegan margarine but happened to have an egg to use for the shortcrust pastry.  However as I don't always have eggs in the house I had a look for an egg-free alternative.  The best vegan shortcrust pastry I found on my blog was this one but I think I would just try the one below with 3 tablespoons aquafaba instead of the egg.  In fact if you did this and used biocheese or daiya instead of gouda, you could easily veganise this recipe. 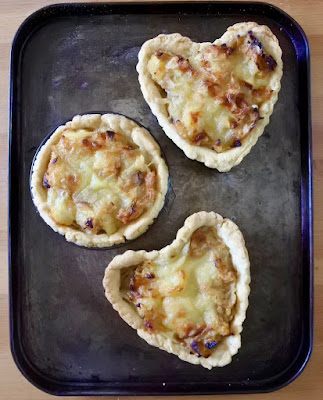 I don't make a lot of pastry and tarts.  So it was the first time I used some cute heart shaped tart tins I bought last year.  I was also able to use some smaller tins that had belonged to my grandmother.  The pies were a bit small for one serve with a kale salad but two seemed a lot.  Probably another salad would have done the trick.  That would be in the spirit of Cranks.

Update: Quite a few people in the comments said they had not heard of or had Homity Pie.  I checked Wikipedia where it says that Cranks actually popularised the pie. 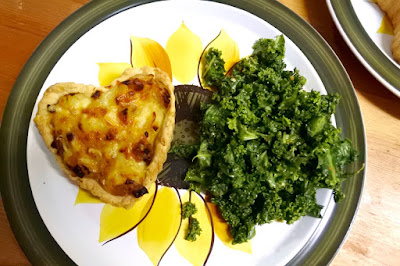 I am sending these pies to Meat Free Mondays, FoodYearLinkUp (for UK National Vegetarian Week which is this week) and Treat Petite (picnic food).

Make pastry.  Rub butter into flours and then mix in egg.  This is so much easier in the food processor.  Knead briefly to form a round, wrap in clingfilm and refridgerate for about 30 minutes.

Make the filling.  Boil the potatoes for about 15 minutes or until cooked.  Gently fry the onions in oil for about 30 minutes until quite soft.  Stir in garlic and remove from heat.  Mix with potatoes, half the cheese, salt and pepper.  Don't worry if some potatoes collapse but they don't need to be mashed.  Check and adjust seasonings.  Set aside to cool while lining the tins with pastry.

Assemble pies.   I used 8 pie dishes and divided the dough among them.  Then I pushed it into the tins.  (I greased four of the old tins but did not grease the four larger non stick tins.)  Divide the filling among the tin and sprinkle with remaining grated cheese.  Bake at 220 C for 20 minutes.  Eat hot, warm or room temperature.

On the stereo:
In the Wee Small Hours: Frank Sinatra
Posted by Johanna GGG at 12:19