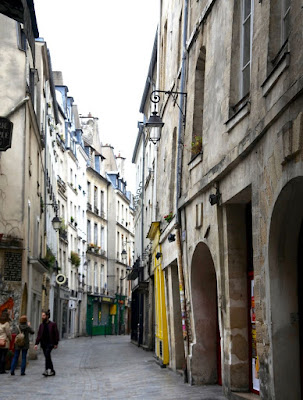 Before I tell you about our gorgeous Paris apartments I must tell about the challenges we faced in getting there.  While in Scotland I was not impressed with our second holiday apartment and kept dreaming of the lovely apartment I had booked in Paris.  Then five days before we flew to Paris we were told there was a leak and were offered an apartment that cost more but was further out and had less character.  The next four days were the Easter long weekend.  I was stressed and then I decided to take action.  I found a similar (vacant) apartment to ours that was just slightly more central, slightly bigger and slightly more expensive.  I suggested this apartment to the booking agent (from The French Experience in Melbourne).  He was very helpful over a holiday weekend.  We ended up agreeing that we would book it and pay some of the difference in price.

Getting there was another story.  We flew with a budget airline whose staff walked up and down the boarding queue looking for anyone with hand luggage that was too big.  (Which was better than the airline making the announcements asking passengers to volunteer to check in hand luggage or hand luggage would be randomly checked in.)

To check into our accommodation we had to ring a contact who would tell us the exact address where we would meet him.  We arrived in Paris with no mobile phone (long boring story) so I asked a woman at Orly airport information desk if she could tell us where the public phones were.  She was very kind and rang the accommodation contact for me.  We then went to the taxi rank where we were given priority for a taxi because we had a child with us!  The taxi drove us along crowded freeways and through the beautiful inner suburbs of Paris where we sighed with joy at the elegant architecture. 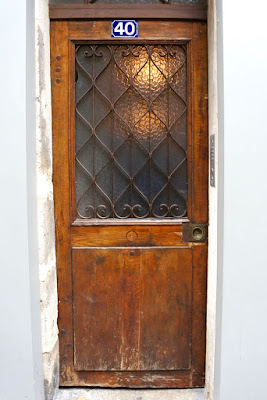 Finally we arrived in our street outside 40 Rue des Rosiers in the Marais.  The street was so narrow that there was no room for a car to park without blocking all other traffic.  It was a quaint cobbled street in an area of medieval Paris that had become the Jewish quarter, descended into slums, was earmarked for demolition and saved to become one of the hipster areas of Paris.  For tourists such as us, it was close to cafes, the Metro, the Seine, Notre Dame, the Pompidou Centre and museums. 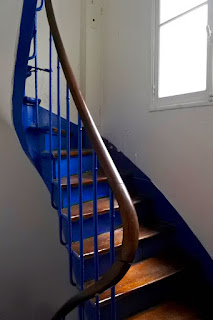 Fortunately we had left a large case at my sister in law's in Edinburgh so we only had a couple of large cases to carry up the one flight of stairs. 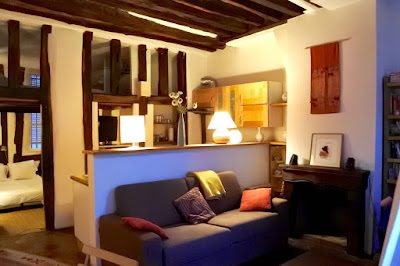 Inside we were melting with happiness at how charmingly lovely the apartment was.  In fact it had even more than I had expected.  There was a loft above the bedroom where Sylvia could sleep and a microwave even though they weren't mentioned in the apartment information.  The apartment dates back to the 17th Century and the exposed beams and stone give it a welcoming historic ambience. 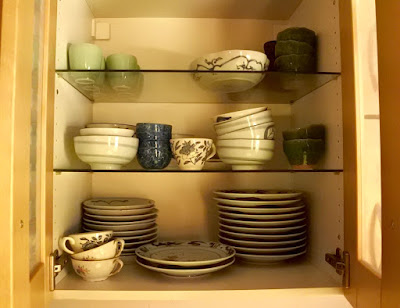 It is a small matter but when I looked at the crockery I was so pleased to see it had some character.  Our previous kitchen in Edinburgh had been so ill equipped - no chopping board, cheap crockery and lots of ugly beer glasses. 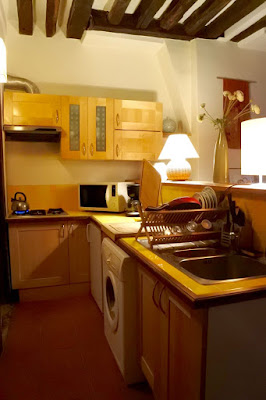 The Paris kitchen had everything we needed.  Actually I didn't cook as much in Paris as in Edinburgh.  A microwave, a kettle and a washing machine was quite adequate.  The kettle was a whistling kettle rather than electric.  Which was fine except that when a young child is not sleeping well, the piercing whistle is that last thing we needed. 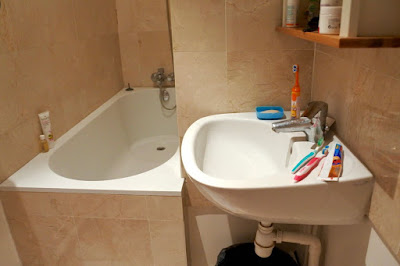 Yes the apartment had a few quirks.  As well as a whistling kettle, there was no overhead lights in any of the rooms and the bathroom was unusual.  The bath had the tap at the opposite end of from the opening.  Which meant that I had to get in the bath to turn it on or adjust it.  Thankfully Sylvia is old enough to turn it off.  The bath (with shower) was really high and even with the hand rail it was a bit worrying climbing in and out. 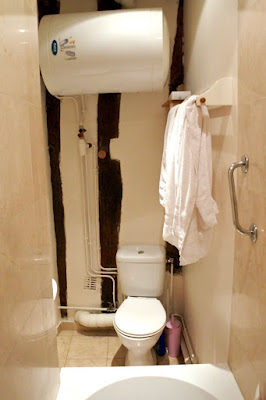 And while I admired the ingenuity of storing the hot water heater up high, I would cross my fingers that it was quite stable when in the bathroom. 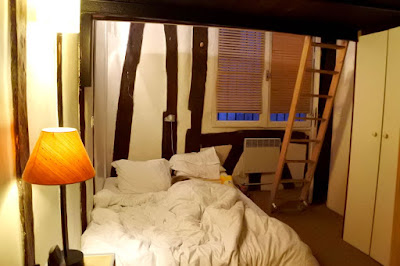 The bedroom off the living room had no door and was quite cosy, though the futon bed was low to the ground.  It was rather dark even with the lamps.  The only tv in the apartment was in the bedroom but after Sylvia watching French cartoons briefly early on, we didn't touch it.  I was happy to live without it.  The other quirk was that the roof was rather low due to the loft being built overhead. 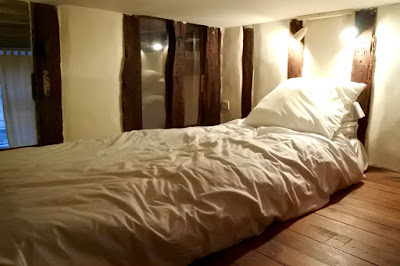 The loft was pretty simple with a bed on the floor and not enough room to stand.  It looked over the living area through the windows and was reached by a creaky ladder.  Sylvia's sleeping was pretty unsettled by moving to different places and being up a ladder was not ideal.  I did not like going up and down the ladder to check on her.  But in theory it was really cute. 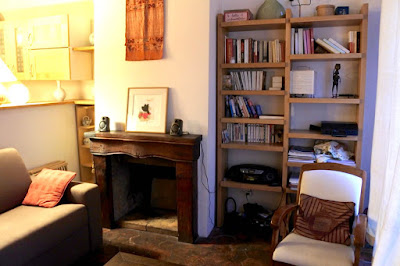 The fireplace was also nice to look at but not so practical.  Which was fine.  The heaters in the apartment kept it nicely warm.  I really loved the living area.  It was cosy and comfortable. 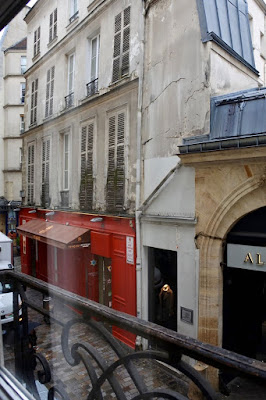 The windows in the living room overlooked the narrow Rue des Rosiers.  Each morning it was fairly quiet but at night the Marais really came to life and our street was no exception.  Despite this, we didn't find it that noisy.  But it was great fun to look down and watch the people going by. 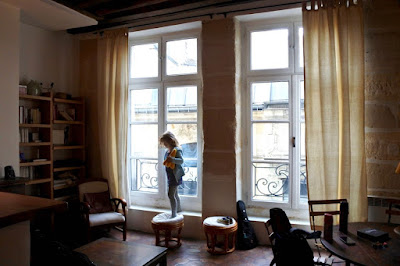 And the large windows let in lots of light.  The apartment looks a bit gloomy in my photos as we were out most of the day and I took most at night.  However it had plenty of light.  You can also see in this photo that we had a table and chairs in the corner where we ate meals. 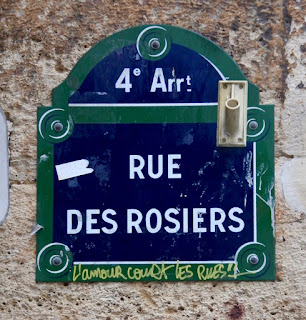 When we were introduced to the apartment we were given the first of quite a few warnings about pickpockets in Paris.  Fortunately we did not encounter any but we did see quite a few armed soldiers on and near our street.  Yet it was an enchanting place to stay.  It was the sort of place that as a tourist, I might look up at the windows and wish I lived them.  It was most pleasing to be the person going through the little door and staying in that apartment.

However our leaving was not without drama.  As we did not have a phone I decided to go to the taxi rank at St Paul Metro station that was five minutes walk away.  The taxi driver asked me to direct him to Rue des Rosiers.  I felt like laughing at the idea of me being able to navigate all the one way streets.  Any wise driver consults a map in this circumstance.  Not this driver.  He got lost in one way streets and finally I got the map from him and tried to direct him to our street, but not without him needing to drive backwards up a one way street.  I was very relieved when we got to number 40 where E was playing ukulele as he waited with Sylvia and our suitcases.  I was sad to leave but hope maybe to return to Paris some day.
Posted by Johanna GGG at 23:09