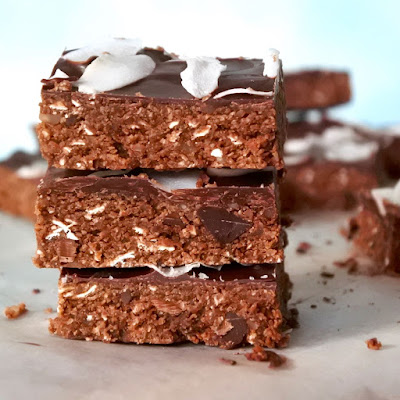 "It may have been paradise for Jack and Jacqueline..."  Do you recognise the song?  It is the Big Nosed Bard from Barking, Billy Bragg.  Yesterday I sat at the kitchen table cracking walnuts for a third version of this Peppermint Patty Slice and this brilliant song, The Great Leap Forward, played on the radio.  For a moment I was lost in a pleasant nostalgic haze of memories of my school friend's walnut tree and cooking to music in student households.  And I was making a slice that had some of the key elements of favourite childhood treats - chocolate, mint and coconut!  Yes, I think it may have been paradise! 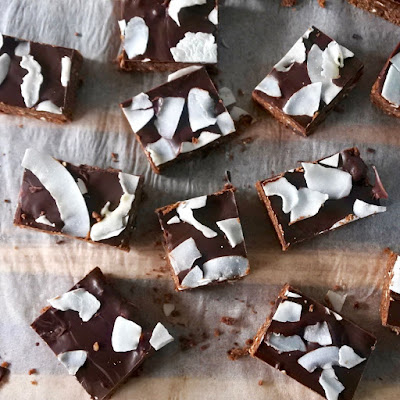 The slice did not start off as paradise.  I was having a distracted day when I just followed the recipe.  I didn't mean to.  I just forgot I was going to put some extra coconut in.  The mixture was so dry I took it out of the tin and kneaded some extra milk in.  There are a lot of oats in this mixture so maybe my oats were less absorbent than the ones in the Oh She Glows recipe. 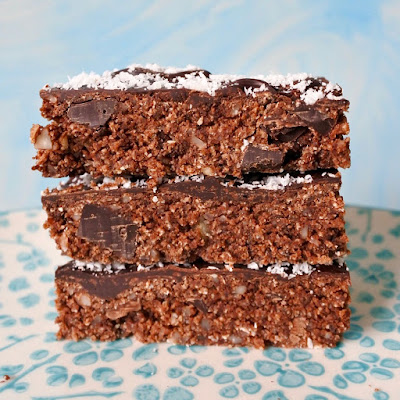 I made the slice again aiming to use less than the 2 cups of oats.  But I got confused and added 3/4 cup of oat flour rather than 1 and 3/4 cups of oat flour.  So I added lots of coconut.  In addition my little food processor attachment to my blender died and I substituted 90% chocolate when I ran out of cocoa.  It was not the sort of cooking to be repeated.

I really liked this second version.  In fact it reminded me of grubs that I made regularly with condensed milk.  It was very soft and coconutty without the firm oaty texture I first achieved.  We took it to a family where Sylvia had a playdate while I went to bookclub.  They liked it very much.  Sylvia, however preferred the first and firmer incarnation of the slice. 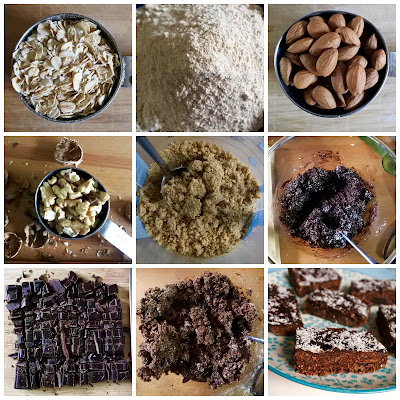 Then it became very important that I make it again.  You see, we arrived at school one morning this week and Sylvia's friends were agog with important news.  The teacher who taught them in in Prep (two years ago) had announced she is leaving the school for another job.  Sylvia and her friends started planning farewell presents.  She had a great idea that we could give some of the slice that I had planned to make again. 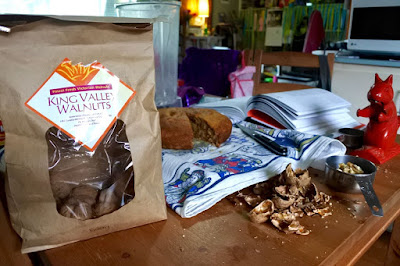 I made the slice while Sylvia was at school and put the chocolate mint topping on when she got home.  While we were about to cut up the slice, an elderly neighbour visited because he had lost his mobile phone.  I went to his house to ring the number to help locate the phone.  Which was on his kitchen bench, plugged into the charger!  When I returned Sylvia had set up house with rugs under the kitchen table and eaten rather a lot of slice.  The neighbour had kept me talking so long that she had tired of waiting and stated to watch television.  Oh dear! 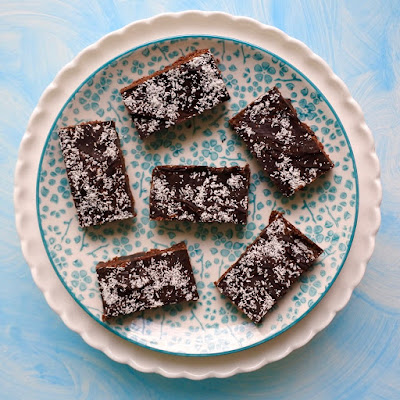 Sylvia had one more request.  I really loved the look of the flaked coconut on the slice which was on the photos I first admired in Oh She Glows.  This was what made me think there should be some coconut in the slice to replace just a little of the oats.  Sylvia asked if I could sprinkle desiccated coconut on top instead.  Excellent idea!

So I had made this slice three times in the last couple of weeks.  Every time we have gobbled it up eagerly.  It is a really satisfying (and slightly moreish)  slice packed with nuts and oats that are quite delicious when flavoured with cocoa and maple syrup.  The peppermint flavouring is subtle.  E is not a fan of choc-mint but he enjoyed the slice. 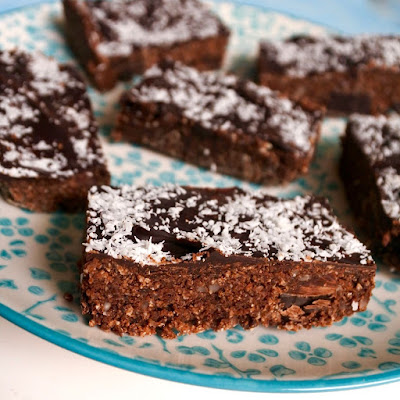 I swithered over whether I should rename the slice.  I am not really sure if I have ever tasted a peppermint pattie.  According to the web, I don't think this slice is very similar.  It is more energy bar than "candy".  But I like the name because it reminds me of Peppermint Patty in the Peanuts comics.

As we packaged the slice with ribbons and labels, Sylvia was less interested in a name.  She just made sure I wrote out a list of ingredients.  I guess kids these days refuse to be fooled by misleading names but they are very interested in what is in food, given all the food allergies.  With everything in order, Sylvia set off for school this morning with a little package of slice along with a card and some loom bands to farewell a favourite teacher.

I am sending this slice over to Choclette at Tin and Thyme for We Should Cocoa, one of my favourite events where bloggers share chocolate recipes.  This month the theme is chocolate and oats.

No bake peppermint patty slice
Adapted from Oh She Glows

Process oats into flour.  Coarsely grind the nuts and mix in the cocoa salt and brown sugar.  Mix in maple syrup and milk, then coconut and chocolate.  Finally mix in the oat flour.  (I do the oats and the nuts separately in my high power blender and mix everything else by hand.  Ange from Oh She Glows does the oats in a blender and the rest in a food processor.)  Press mixture evenly into a lined 20cm square tin.  Set aside.

Made the topping by melting the chocolate, oil and peppermint extract together.  (I do this in the microwave for about 1 minute.)  Spread over the slice mixture.  Scatter with coconut.  Place in freezer or fridge for a short while to set chocolate.  Cut into bars or squares.  Keeps in an airtight container at room temperature for at least a few days.

On the Stereo:
Step right up: a musical journey compiled and sequenced especially for MOJO by Tom Waits
Posted by Johanna GGG at 22:43