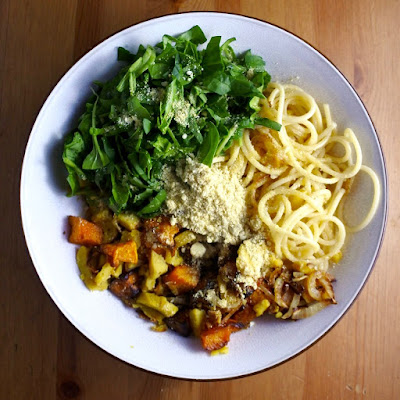 "What will I make for dinner?" I asked Sylvia as I pottered about the kitchen after her bath.  I try to be organised enough to know what I will cook of an evening but it doesn't always happen.  It is pretty useless to ask a 7 year old who turns her nose up at so much that I cook.  Yet there is nothing wrong with a bit of democracy.

While I gathered up bits and pieces for dinner she watched news headlines on ABC3 that are aimed at kids.  We try not to have the news on in our house while Sylvia is around, though occasionally she hears it on the radio.  She is fascinated by it.  If only like Noni Hazelhurst suggested, it did not paint the world as such a violence, sad, black place.  And don't get me started on politics and all the inadequacies of our politicians.

So I was surprised as Sylvia watched her kids news that she said accusingly that I had not told her there was an election on.  (As an aside, our MP of 20 years is retiring and it is exciting that our area might actually have a proper contest in the forthcoming federal election next month)  Not only did she tell me that she loves elections but she asked if she could help me vote. 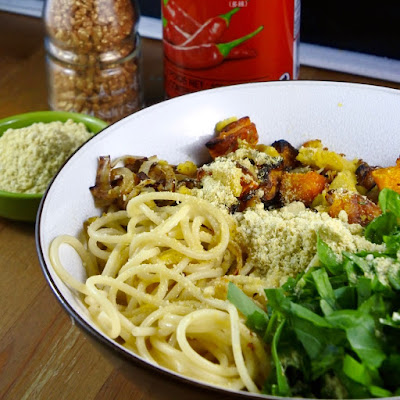 Sadly Sylvia did not get to vote on dinner.  Her suggestions included pizza and sausages.  She highly approved of the pasta but was a bit reluctant about eating the pumpkin and spinach on the side.  Not too reluctant, I was relieved to observe.  E and I really enjoyed this dinner made from odd bits and pieces that needed using.  It was a bit easier to make, given I had leftover omelette and the pumpkin was put on to roast earlier.

Today is a significant day in the preparations for the federal election.  It was the closing date to enrol to vote.  For those unfamiliar with the Australian political system, voting is compulsory.  So as Sylvia expressed her enthusiasm for the election, I was hopeful that in the not too distant future, she will be just as enthusiastic about enrolling to vote when she turns 18.

I am sending this to Healthy Vegan Fridays with congratulations to Kimmy for reaching the 100th week, Meatless Mondays at Tinned Tomatoes where Jac had posted some interesting posts for UK National Vegetarian Week last week, and Pasta Please.  I am delighted Jac at Tinned Tomatoes is now running Pasta Please with a new co-host, Chris at Thinly Spread, who is hosting this month.  For long time bloggers, you might recognise this event as the one that grew out of Presto Pasta Nights that Ruth at Once Upon a Feast held years ago.

While roasting pumpkin think about what to do, fry up onions and while they are slowly cooking, cook the spaghetti.  Push cooked onions to one side and heat up omelette and pumpkin on frypan.  (NB the omelette works best if it has cooled first so it is easy to cut.)  Mix omelette and vegies together.  Serve the spaghetti in bowl with a drizzle of oil and a squeeze of lemon juice.  Serve omelette-vegie mixture alongside it and lots of chopped spinach.  Scatter with a generous spoonful or two of parmesan.

Blend tofu, olive oil and mirin in tall large jug using a hand held blender.  Heat frypan and swirl around the canola oil.  Pour omelette into frypan and cook 10 minutes on low heat, then a further 10 minutes with a lid on frypan.  Use an eggflip or spatula to check it does not stick to frypan and then flip onto a large plate.

Blend in high power blender until ingredients are blitzed to a powder.

On the Stereo:
The Best of the Pogues
Posted by Johanna GGG at 23:04