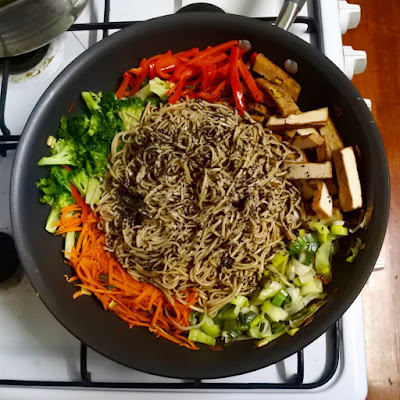 May brings up into the depth of autumn and yet the weather is most unseasonably warm with the occasional chilly day.  E has almost finished his Tiny Tim biography, Sylvia is reading the Famous Five and I am back into reading for my book group.  I am feeling that after our Scottish trip we are getting back into a routine of sorts: better sleeping, healthier meals, back on the bike, back into playdates and calmer mornings.

I bought a Vegan Life Magazine at Edinburgh Airport and highly recommend it.  Issue 14 had a recipe for Collard Green Sukiyaki with Buckwheat Noodles from Terry Walters.  It involved cooked the vegetables in sections, pushing them to the side, added the noodles with sesame seeds and pouring a broth over it.  I found that the broth had too much soy sauce so I hope to tinker with this to find a version I really like.  Though I suspect you could do this with any veg or noodle or seasoning.  It makes for such a pretty and delicious dinner. 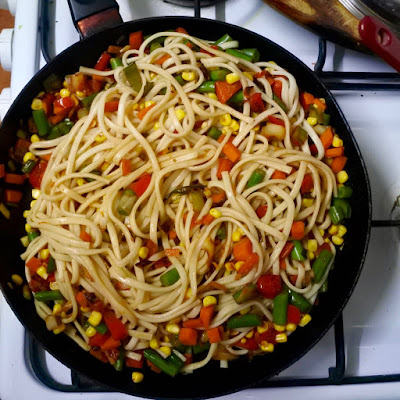 I also was inspired by VegHog to use up some of the udon noodles that have accumulated.  I loved her ideas of cooking udon noodles and tofu but we had run out of tofu.  Instead I used lots of vegies, some soy sauce and spoonful of thai curry and scattered cashews over the top. 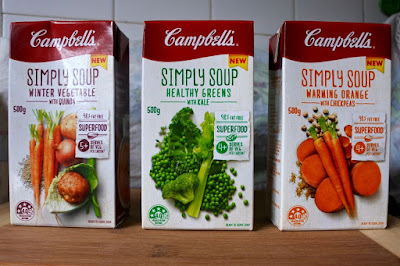 One great thing about writing up what is in my kitchen here is it reminds me what is in the pantry.  Such as the half a carton of this warming orange soup that I must have for lunch.  My eyes were drawn to the pretty pictures on these packets but I liked that they don't seem to have too much rubbish and E numbers in the ingredients list. 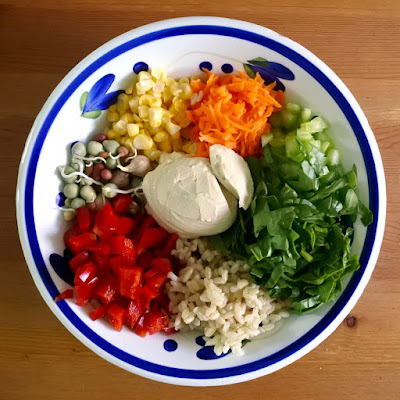 I have been making an effort to eat more vegies in my lunches.  This hummus bowl was a good day.  If only it was always so.  The bowl has grated carrot, corn, sprouts, red capsicum, brown rice, spinach, celery and hummus. 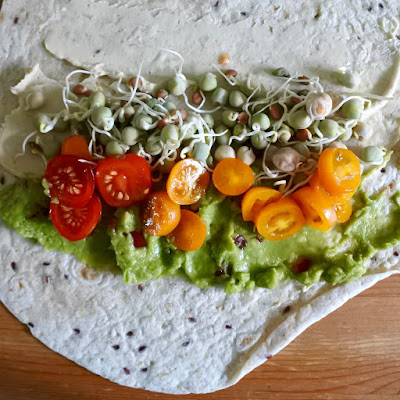 Another good day was this wrap with guacamole, hummus, cherry tomatoes and sprouts. 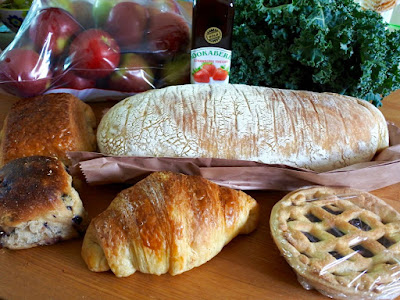 I've been making more of an effort to go to the Coburg Farmers Market.  Check out Veganopoulous' recent market post.  It has changed quite a bit since my visits when it started a few years ago.  The market has recently started opening every weekend rather than 2 weekends a month.  It makes it easier to get there but I think the weeks I have gone are not the 2nd and 4th weekends so some producers are different.  I was happy with my small haul a three weeks back: Jonathan apples, strawberry vinegar, kale, ciabatta, berry pie, croissant, pain au chocolate and currant bun. 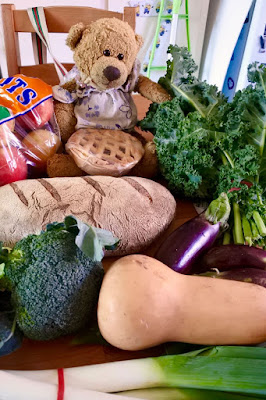 Last weekend we visited Coburg Farmers Market again.  This time I bought sourdough bread, berry pie, apples, kale, broccoli, butternut pumpkin, eggplant and leeks.  Sylvia was the one who chose the berry pie because she loved it the first time and insisted on Marmalade teddy bear being in the photo. 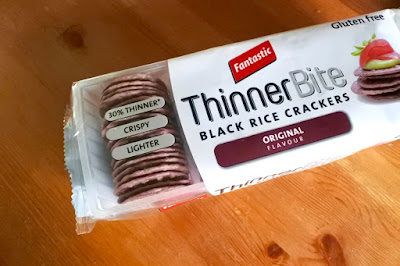 I've seen a few interesting items in the supermarket lately.  These black rice crackers grabbed my attention.  They didn't taste very different but apparently black rice has more nutrition than white rice.  I also think they would look stunning with white rice crackers on a platter. 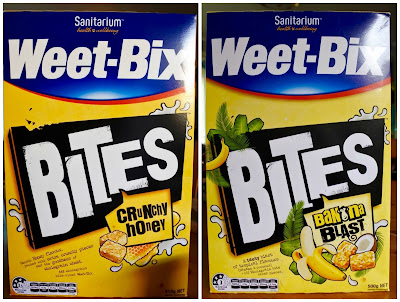 Since getting home from Scotland Sylvia has not been eating much for breakfast and lunch.  One day I even had a bad morning and she only had a small slice of apple slice and an apple in her bag and she insisted it was enough.

Finding something she wants for a quick breakfast before school is a challenge.  After this weetbix slice, she fell in love with weetbix and then was drawn into these fancier (and sweeter) versions.  I bought her the banana and coconut weetbix bites.  She said she only wanted crunchy honey weetbix bites.  We bought those at the end of the banana box and she was disappointed because it didn't have honeycomb like in Crunchie bars.  So then she decided she wanted banana and coconut!  ARGH!  At least she is eating something for breakfast. 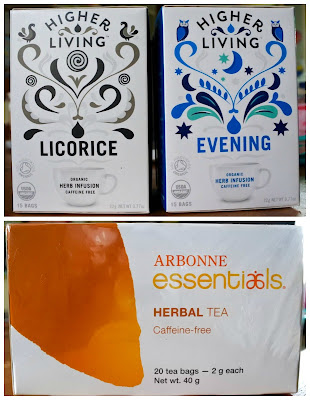 Meanwhile I have found myself with rather too much tea.  I am quite partial to celestial seasonings fruit tea and bought some.  Then I found these Higher Living Licorice (with fennel, cinnamon, orange peel, lemon peel, ginger and cloves) and Evening (lemongrass, fennel, chamomile, peppermint and lavender) teas on special.  I also got a box of Arbonne herbal tea from my sister Fran.  It has dandelion, peppermint, parsley, elderflower, fennel, licorice.  I think it sounds lovely but am very glad that tea keeps for some time. 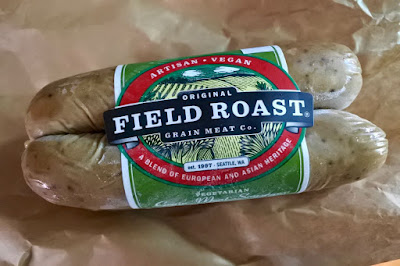 Lastly, I bought some apple and sage Field Roast vegan sausages from Smith and Deli recently.  I haven't tried Field Roast sausages before but I have seen people using these flavour sausages online and always wished to try them myself.  Now just need to decide if I use them in our favourite bangers and mash meal or do something a bit more fancy.

I am sending this post to Maureen of The Orgasmic Chef for In My Kitchen.  It is an event where bloggers around the world share what is happening in their kitchens.  Please head over to Maureen's blog and visit some other bloggers or even join in (by 10th of each month).
Posted by Johanna GGG at 23:05