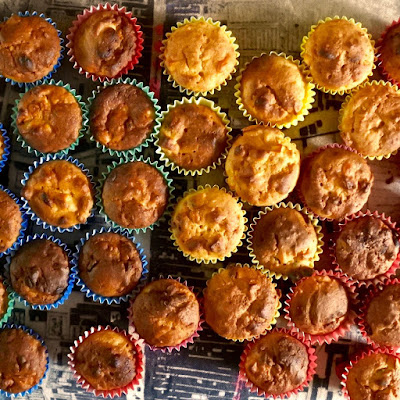 It is an interesting life with kids.  I think I have used up all the apples and can head out to the farmers market for more and then I find that a couple have found their way to the dolls trolley under a comic.   Meanwhile I have been told by an allergy clinic that she still has a peanut allergy (not one of the lucky 20% who grow out of it) but that I should make sure she is exposed to macadamias and brazil nuts.  And I bought some passionfruit to make some healthy smoothies but she was too busy eating weetbix for breakfasts.  These are the challenges and inspirations behind the apple passionfruit and macadamia muffins! 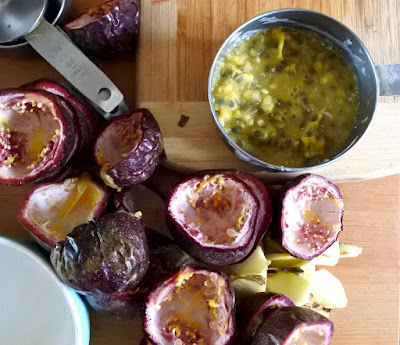 The muffins were made for the Mothers Day weekend that has just passed. I made them after visiting the vet, the farmers market and taking Sylvia for gymnastics class.  Sylvia was interested in my baking until I had told her she wasn't to eat the apples I was chopping for the muffins.  This was not such a problem as the fact that I had the muffins bake for ages but they still seemed uncooked on the inside.  After cooling, they just seemed nicely moist but then they stuck to the papers.  Such as shame when they tasted delicious.  Perhaps more flour and less tinkering with a recipe might have helped.  The mixture was really really runny.  Far more than my gut felt was right.  And E complained about the passionfruit seeds but I loved them. 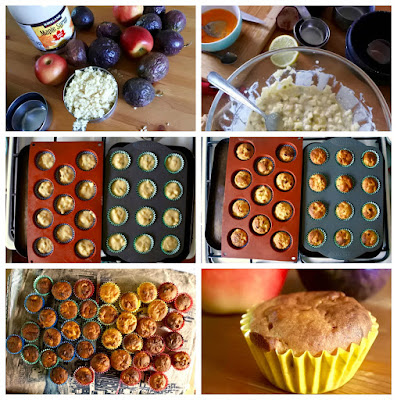 My family had arranged to have brunch for Mothers Day.  I had sort of thought the muffins might be suitable as they were quite fruity without too much added sweetner.  That was why I kept them gluten free.  However before decided to bake them I had planned to make a quick baked beans.  I went ahead with these and I love baked beans and on Mothers Day I felt I could indulge my tastes a little too.  The photo below is the only one I took of them in the busy weekend. 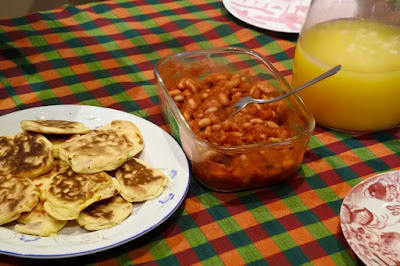 The brunch was really delicious.  Sylvia and I helped mum to make corn and red papper fritters and zucchini and feta fritters.  She had learnt well about flipping pancakes in our own kitchen.  The fritters were pillowy soft and went well with the baked beans and fresh orange juice before I started on the pancakes.

I mentioned that Sylvia had allergy testing recently for her peanut allergy.  They say kids should retest when they start school.  Only it took her two and half years on the waiting list.  They finally contacted me when I was in Scotland.  I would love it if she had outgrown her allergy but it was not to be.  We get by pretty well with her peanut allergy, despite my love of peanut butter.  I know we are lucky she has not had such a severe allergy that it is judged anaphylactic.

However there are time when the peanut allergy is terribly inconvenient.  Like when her little cousin innocently spreads peanut butter on toast and brunch and then sticks the same knife in the vegemite to spread some of that too just minutes before Sylvia is about to have vegemite on toast.  It is understandable that Sylvia was upset when her allergy makes peanuts seem like the devil incarnate.  Fortunately these sort of incidents have been very rare in the 5 years since the allergy was first diagnosed. 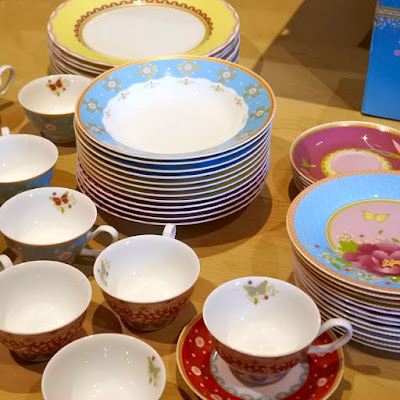 Meanwhile, my dad and my siblings put in money to buy new crockery for my mum.  It was very pretty.  I remember my mum putting together supermarket coupons to buy the dinner set this crockery will replace.  I think I might have been a teenager at the time.

As the pancakes had been very popular and disappeared liked the proverbial hotcakes, and Sylvia was off the idea of vegemite on toast she was still hungry after most of the family had left.  It was then that we realised I hadn't even brought our the muffins.  Sylvia decided she liked them and ate quite a few. 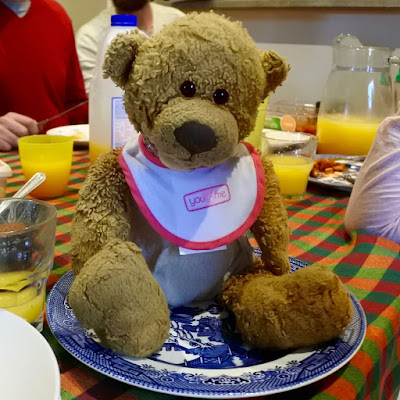 Even so I wasn't sure about taking them to a Kerin's house for afternoon tea because of the awkwardness of them sticking to the paper.  The muffins were so much part of the paper that it reminded me of a classic moment on talkback radio years ago when someone confessed they were too lazy to put the cupcake paper in the bin so they just ate it.

So I took some of the lovely beetroot, seed and walnut cake that my mum had made for dessert on the previous evening.  It went down very well.  (But I took a terrible photo of it.)  There was lots of lovely food at the afternoon tea but I think I was particularly fond of Damian's imitation of the Filou spinach and feta pastry which was superb.  Then we went home and had leftover soup for tea after which I fell asleep in front of the tv.  It was a fun weekend but very tiring.

Mix apples, passionfruit, curdled milk, nuts, maple syrup, olive oil and eggs.  Stir in flour and baking powder.  Add more flour if needed to make the batter a thick enough consistency to lift on a spoon without dripping everywhere.  Spoon into mini muffin pans.  (I lined mine with cupcake papers but might try just putting circles of baking paper at the bottom of each hole and spraying with oil.)  Bake in a moderate (180 C) oven for 30 minutes or until a skewer comes out clean when inserted in a muffin.  Cool on a wire rack.

Fry onion in oil for about 5-10 minutes over medium heat or until browned.  Add remaining ingredients.  Check and adjust seasoning.  Simmer for 10 to 20 minutes.

On the Stereo:
The Swell Season - self titled album
Posted by Johanna GGG at 22:15