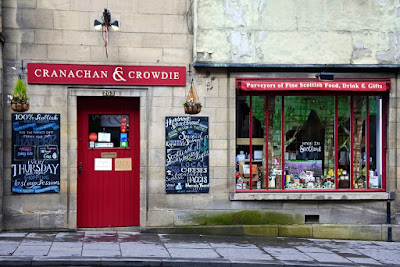 As I am nearing the last of my posts about our trip to Edinburgh and Paris, I bring you a post about some of the meals we had at home and an esoteric selection of food shopping. 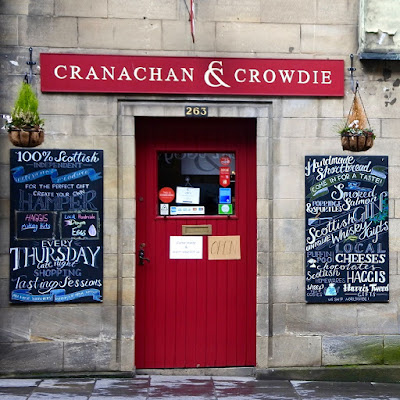 Above is perhaps my favourite food shop in Edinburgh: Cranachan and Crowdie.  It really stood out among all the tartan tat food shops on Royal Mile that sold the same old fudge, rock and teas.  Cranachan and Crowdie had a fantastic selection of really good Scottish food from small producers.  Sylvia loved the "Puffin Poo" from the Shetland Fudge Company.  I was tempted by the Haggis oatcakes and some of the liqueurs.  I ended up buying excellent Shortbread House shortbread, a tartan baking dish, Orkney smoked cheese and Stag seaweed crackers.  I could have bought so much more if I had the money and space in my suitacase. 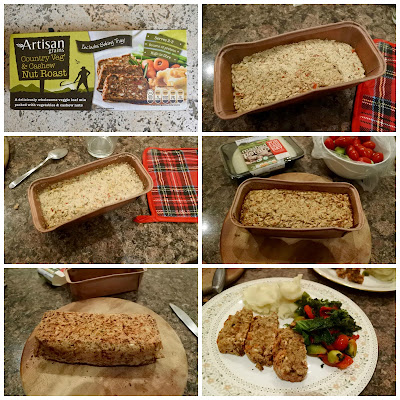 Those who have followed my blog for some time will know I love nut roasts.  I didn't have the wherewithal to make one from scratch on our trip but I was pretty excited to find a packet one in Holland and Barratt. It was a simple matter of tipping the dried mixture into a cardboard "loaf tin", adding water and baking.  How I wish I could buy these locally. 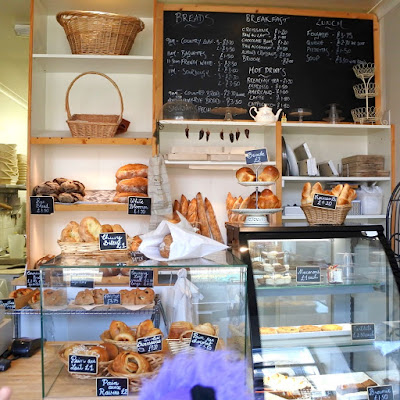 Though we had fantastic bread in Paris, the bread in Edinburgh was hit and miss.  It was made even more challenging in our second holiday apartment where we didn't have decent bread knives (and only had a chopping board because e found one when clearing out his dad's house).  I fell in love with the bread from the Wee Boulangerie (67 Clerk Street).  Not cheap but it was worth paying extra for the excellent dense crusty bread. 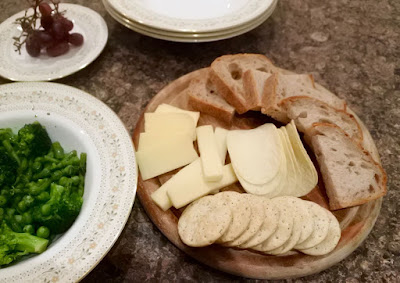 Here is a meal we had one night with bread from the Wee Boulangerie, some seaweed crackers, Pringles crisps, smoked cheese and a container of green vegies with mint butter from Sainsburys.  It probably was on one of those evenings with little energy but a need for some greens. 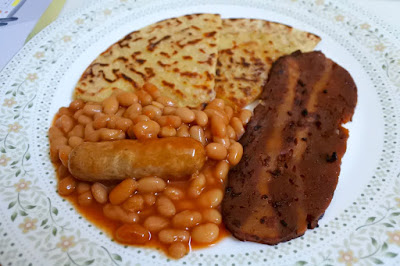 I bought some vegan bacon at the Sgaia's vegan stall at Stockbridge market.  It was just the think for a fry up at our apartment.  Potato scones, beans with vegie sausages and vegan bacon.  I probably cooked the vegan bacon a bit much but loved it.  I've sampled a few vegan bacons since going vegetarian but loved the streaks in the bacon. 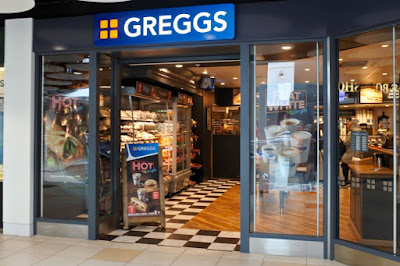 In Australia, Bakers Delight Bakeries are everywhere.  In the UK there seems to be a Greggs Bakery everywhere you look.  I am quite partial to the cheese and onion pasties.  I tried to introduce Sylvia to them.  She just liked eating the pastry from around the edges.  Which was ok once I found out how much extra they charged to eat instore! 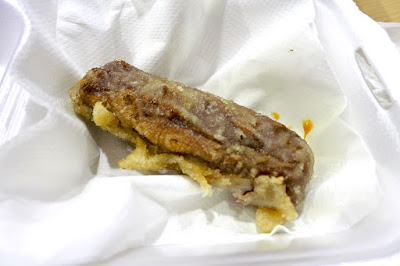 After one long day we stopped at Yum Yums fish and chip shop at the top of Fleshmarket Close in Cockburn Street.  I was too tired to face getting dinner so a box of chips was a quick option.  And as if this wasn't unhealthy enough we finished by sharing a deep fried Mars Bar.  They are ugly and such a weird idea.  Yet they are really good in a disturbing sort of way that means one is enough to last a long long time. 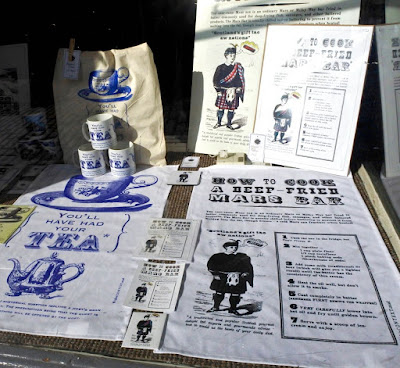 And just in case you are crazy enough to want to make your own deep fried Mars Bar at home, you can buy the tea towel in Victoria Street.  We were more amused by the "You'll have had your tea" tea towel.  It is a phrase that E and his dad both loved to use in jest but apparently was used more seriously to greet guests by other Edinburghers in the past.  This is one of the tea towels I wish I had bought. 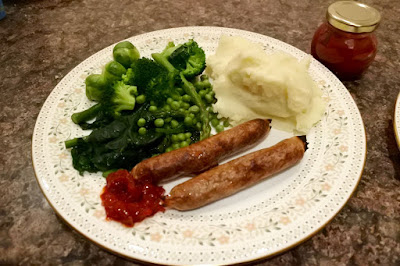 I was really impressed with Dee's vegan sausages that I bought from Holland and Barratt.  I bought the traditional sausages spiced with coriander, pepper, ginger and Irish dulse seaweed.  I think it is the first time I have had vegetarian sausages with good skins on them that remind me of meat sausages.  Sadly I don't think they are available in Australia.  They were excellent with chutney, mash and green vegies 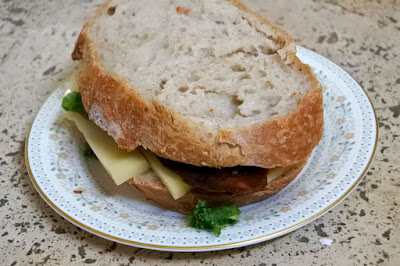 Another very simple meal was this excellent sandwich on Wee Boulangerie bread and filled with swiss cheese, the Sgaia bacon, kale and chutney. 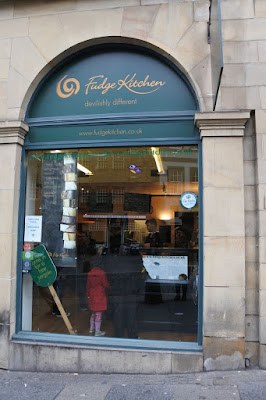 E and Sylvia are very keen on fudge.  I am less enthusiastic about it.  However I did like the chocolate salted fudge from the Fudge Kitchen.  The guy behind the counter was entertaining as he chatted to us and gave us fudge to taste.  I also watched them make it for a short time and was told that they mix it to stop the sugar crystalising and keep the consistency creamy.  Indeed it was far superior to a lot of fudge I have tasted. 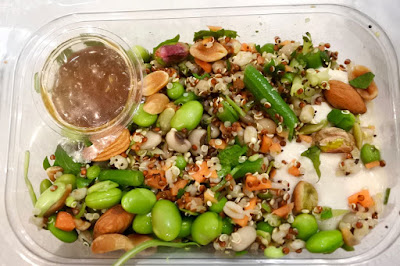 In the past we have visited the Marks and Spencer cafe in Princes Street a few times.  I am very partial to the cheese scones but there is quite a range of sandwiches, cakes, soup, salads etc.  It is quite cosy with little booths in an area walled off from the food hall.  On this visit all I could see was a brightly lit space with a few plastic chairs and very little on offer.

As I had decided to have lunch at Marks and Sparks, I bought this Nutty Super Wholefood Salad with cannelini bean and sesame tahini dip.  It was packed with quinoa, edamame, green beans, grated carrots, black eyed beans and nuts.  Unfortunately Sylvia could not taste any as it had peanuts.  She had a less satisfying meal of chips and juice and I can't remember the rest.  Then on my last day in Edinburgh I discovered that I had overlooked the cafe earlier.  So I dropped in for a cheese scone and a cup of regret! 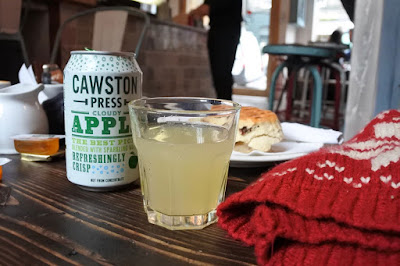 On a chilly afternoon E spied an interesting coffee shop called Procaffeination in St Mary's Street just South of the Royal Mile.  We managed to go back one morning a few days later.  The waitress was not very interested in helping us, it was cold and deserted with no music playing.  The place had a nice design with little trains about but it was souless.  I enjoyed my fizzed cloudy apple juice and currant bun but Sylvia's hot chocolate was too big for her.

As we were ready to leave, a guy arrived who put on music, gave us a friendly greeting when he passed us and other people started to arrive.  The ambience changed and we were sorry to have been there in the graveyard shift. 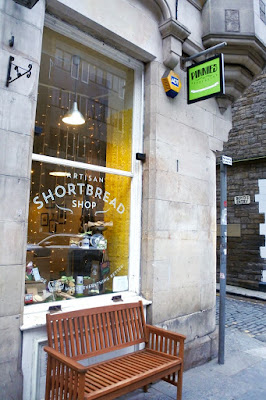 Just down from Procaffeination was The Shortbread Shop.  On the window it says "where butter makes everything better".  This was a shop with excellent shortbread, cosy ambience and a sense of humour. 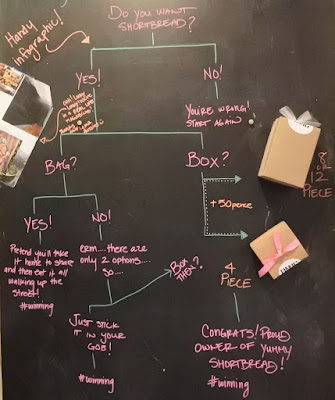 So I leave you with a photo of an amusing flowchart in the Shortbread Shop.  I particularly love the result if you choose a bag of shortbread: "pretend you'll take it home to share and then eat it walking down the street".  We've all been there!  We did not buy shortbread there.  We did have a wee taste and it was indeed excellent shortbread.  I suspect it was not long after we had visited the Fudge Kitchen.  There are only so many sweet treats one can buy.  Even on holiday!
Posted by Johanna GGG at 23:09