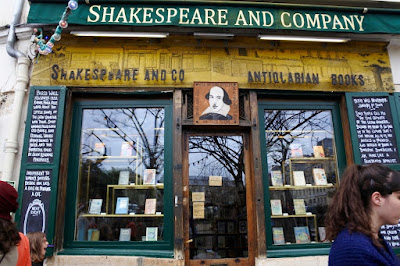 Imagine the excitement of finding an English speaking bookstore in a country where they don't speak your language.  This explains part of the allure of the enchanting Shakespeare and Company bookstore in the heart of Paris.  However I also love it for its history that has become part of my story. 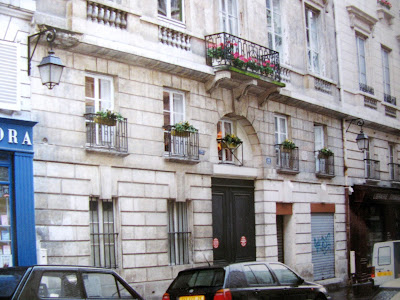 The original Shakespeare and Company bookshop was initially set up in 1919 by American ex-pat, Sylvia Beach at 8 rue Dupuytren.  In 1921 it moved to 12 rue de l'Odeon where it was a hub for American ex-pats until it closed during the German occupation in 1941.  Sylvia Beach was a great supporter of writers, most notably publishing James Joyce's Ulysses when it was banned in the USA and UK as an obscene book. 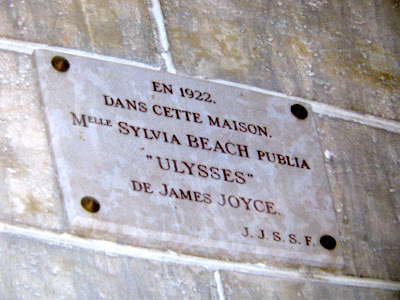 I stumbled upon Sylvia Beach when looking for an honours thesis topic.  I ended up writing about literary relationships between men and women, including Sylvia Beach and James Joyce.  Hence my interest in the bookshop when I first got to Paris some years later.  I first sought out the 12 rue de l'Odeon building.  The grey one above with this plaque in memory of Sylvia Beach.  (These two photos and the one just below are quite old ones from travels before digital photography.) 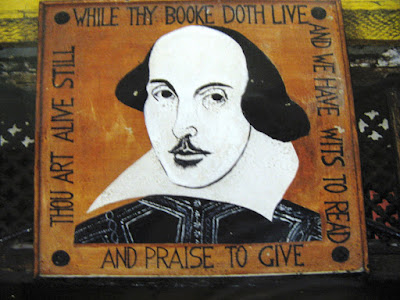 After paying my respects at rue de l'Odeon, I then went to 37 rue de la Bûcherie where George Whitman set up a bookstore in 1951 that in 1964 he renamed Shakespeare and Company in tribute to Sylvia Beach's store.  I asked about the history of the place.  A young man asked if I wanted to sleep there.  I thought he was joking and told him I had a hostel room.  Years later I discovered that artists did stay there and I had passed up my chance to do so.  So sad.  I loved the old monastery turned bookstore with all its cluttered nooks, low doorways, and signs such as "be not inhospitable to strangers lest they be angels in disguise." 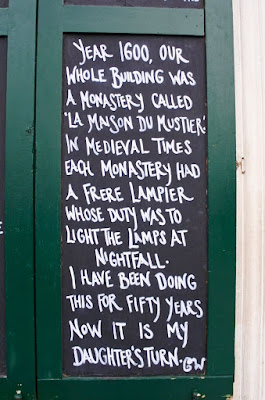 In 2011 George Whitman died and I hoped that Shakespeare and Company would continue.  As you can see by the sign above that is outside the shop, it has continued to thrive.  Her name is Sylvia Beach Whitman.  It seems George and I both have daughters called Sylvia.

I am very pleased his daughter is keep the flame alive.  The shop continues to feel like an old fashioned bookstore that welcomes artists and bohemians.  There are still many older books crammed into the shelves.  You know the ones that have a plain blue or red hardback binding rather than the more modern shiny attention-grabbing paperbacks.  Upstairs and writers group seemed to be in session and in another room someone was playing a piano. 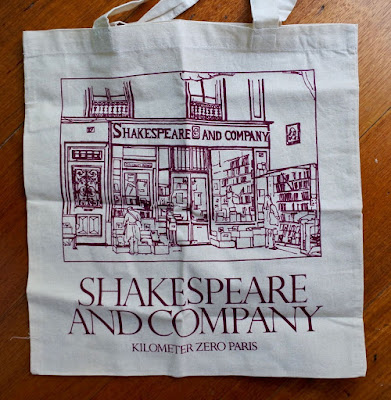 However the store also feels like it is keeping up with the times too.  Next door is now a cafe and at the front of the shop is a small selection of Shakespeare and Company merchandise.  And of course there are modern books for those who want to buy them.  Outside on a warm Paris spring evening, it was busy with tourists including what looked like a busload. 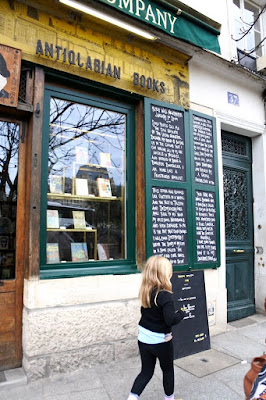 Returning to the bookstore this visit with my daughter Sylvia, I felt like this bookstore was a little part of her story too.  I used to know Sylvia Beach's story so well but now I can tell my Sylvie that she was a generous and brave woman who encouraged and supported some amazing writers of the 1920s in Paris.  As a 7 year old Sylvie was interested in the story and very pleased to read some English books in the children's area.  Maybe one day she will read more about her and return to Shakespeare and Company.

Notes: I am not posting photos of the inside of the store (which is just so charming) because there were signs asking visitors not to take photos.  I did buy a tote bag and a notebook.  For those who are interested in visiting, it is on the left bank of the Seine, just across from the Notre Dame. 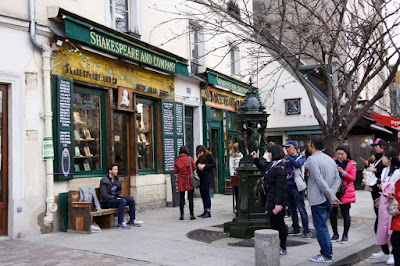 No coincidence that I am posting about this magical bookshop on the 400th anniversary of William Shakespeare's death.  I am sure he would be proud to lend his name to the store that continues to foster a love of books in our digital age.