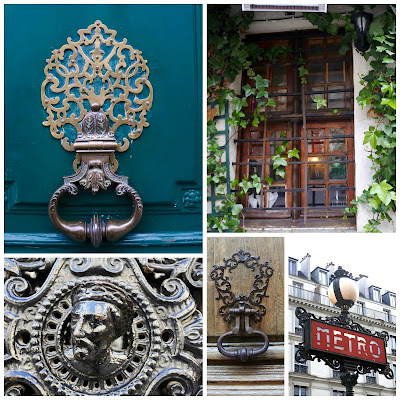 Shopping for food in Paris was a joy.  Walking along the streets of the Marais near our accommodation was a joy.  So much beauty and history.  From the boulangerie with its beautiful bread to the patisserie with rows of pretty pastries to discussing cheeses in the fromagerie.  So here is a run down of some of the shops I visited in Paris. 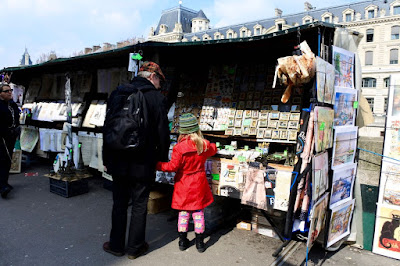 Most of the shops in this post are food shops but I can't resist a photo of the souvenir shops along the Seine.  We also spent some time in Le BHV department store in the Marais where they would check our bags upon entering. 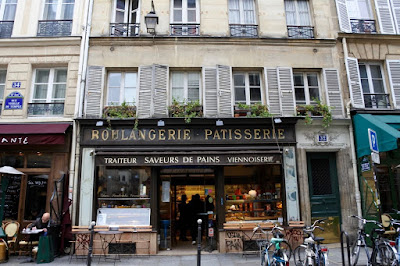 The above boulangerie patisserie on Rue de Vieille du Temple was a favourite of ours because it was the one we had breakfast on our first morning.  (Notable for a customer telling me how rude the staff were as they struggled with my lack of French.)  We bought quite a few baguettes and pain au chocolats here. 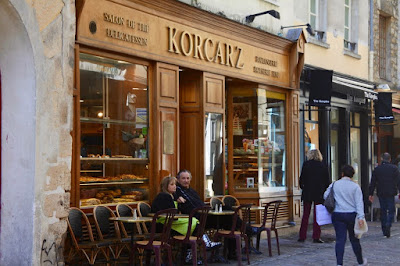 Later we found that Korcarz a few doors from our apartment in Rue des Rosiers also sold croissants and pain au chocolate.  We made a few morning trips here too. 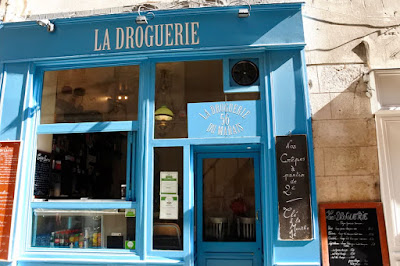 La Droguerie on Rue des Rosiers made crepes at the window.  We walked down one evening after dinner to buy a nutella crepe.  The next day the man who worked there said hello as we passed. 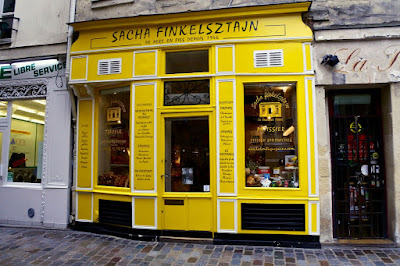 I loved the look of the challah in the window of the Finkesztajn bakery again on Rue des Rosiers.  Sadly I had one of those bad vegetarian experiences.  The pierogi was baked (not steamed) and looked really good.  I bought a pierogi fromage (cheese).  It was warm and looked delicious but when I took it back to our apartment and bit in, it was cheese and meat so I threw it out.  Quel dommage! 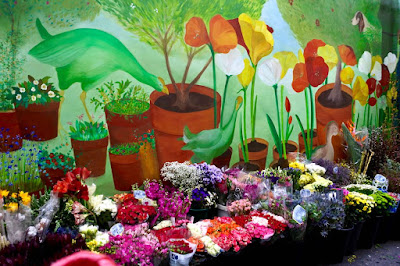 My mum recommended the Marché des Enfants Rouges (market of red children).  The name comes from the 16th century orphanage and the colour of the children's clothes to mark them as recipients of charity.  It was a short walk from our apartment.  I really liked the murals at the entrance, all the colourful flowers and had I been seeking lunch I might have stopped to buy a meal at some of the stalls. 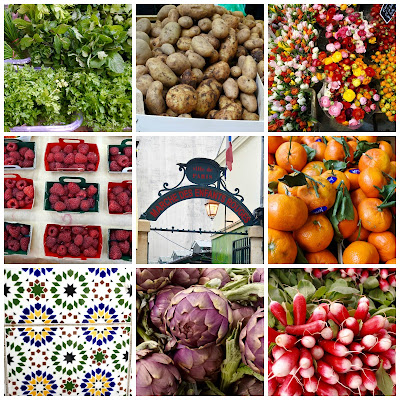 Instead I stopped and browsed at the undercover fruit and veg stall.  I didn't purchase much because we didn't have many meals left to eat at the apartment.  We ate quite a few raspberries while on holiday because they are so easy to eat.

I will confess I didn't fall in love with the market.  It is because I have an idealised Parisian market in my mind and this wasn't it.  When I first visited Paris I wandered the streets in a fog of dreamy enchantment and came across a market in the street selling amazingly good fruit and veg.  I had no idea where I was and still don't know where it was to this day but I have such wonderful memories of it that I keep hoping I might find it again. 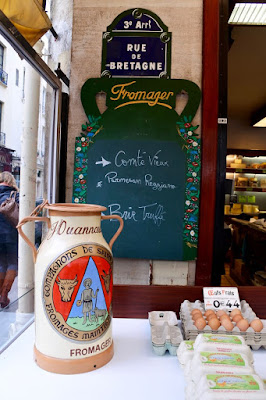 I really loved the fromagerie (cheese shop) at the entrance to the market.  One of the men behind the counter chatted with me about what I would like and made some recommendations.  When I said I needed plain for Sylvia, he recommended Comte.  I also got her some emmental which she loves.  And he recommended a goats cheese for me.  It was so superb and creamy that I regret just buying a small round of it.  I now can claim that the best goats cheese I have ever tried was in Paris. 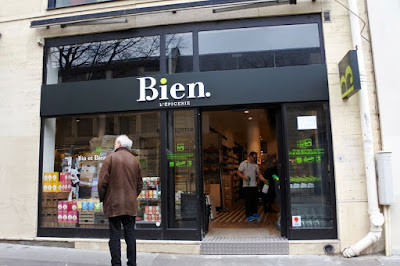 We also visited some more modern grocery store.  Franprix was more like a Sainsbury's Local or Coles Express.  Yet it delighted us with so many new brands.  It seemed strange that a bottle of Perrier water was so cheap.  (French tap water was less impressive.)  I much preferred the Bien L'Epicerie with its gourmet organic groceries.  It had some really interesting vegan products too. 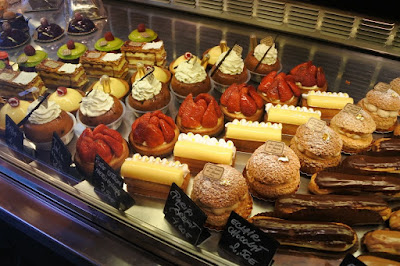 And I loved the patisseries.  So different from our bakeries.  I was particularly fond of the chocolate eclairs. 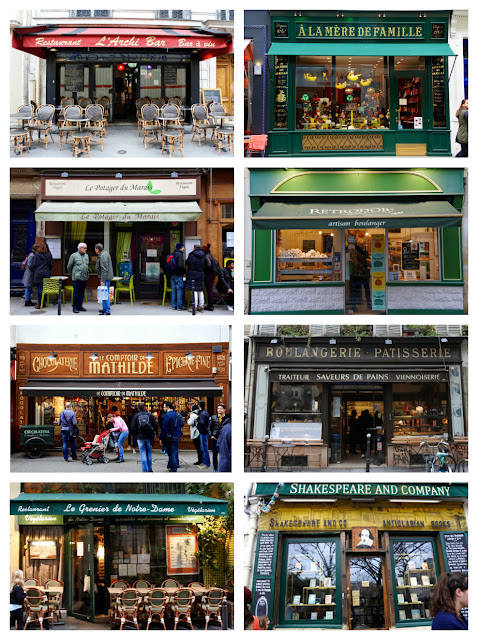 And because I love the shops and cafes of Paris, I leave you with a collage of some shop front photos.
Posted by Johanna GGG at 23:08