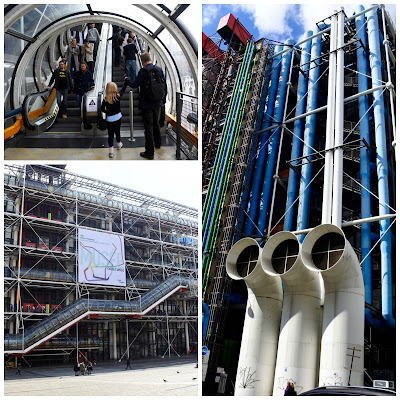 On our last day in Paris the Paris Marathon was cutting the city in half.  We decided to visit the Pompidou Centre which was a short walk from our apartment.  It is an marvel of 1970s modern architecture in a city with many centuries of architectural history.  I have been there before but this was the first time I had gone inside and I was impressed by the artwork, the restaurant on the top floor and the amazing views. 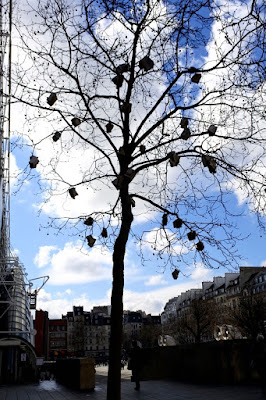 It is the sort of area where it is not surprising to see fun idea such as books growing on trees.  Unfortunately after walking along the quirky Rue de Rambuteau, the area around the Pompidou Centre was very touristy with lots of cafes that charged a lot and gave little in return.  We went into one and the atmosphere was so absent that I insisted we leave again. 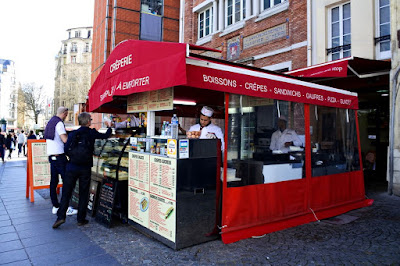 E and Sylvia were hungry and narky at me for searching for that perfect place.  Mind you, it wasn't easy finding a place to each in Paris to suit vegetarians and fussy children.  Finally I settled upon this creperie.  It was cheap and cheerful.  Just what we wanted.  E had a croque monsieur; he was very fond of them.  Sylvia and I shared a cheese crepe.  We both loved it.  I almost bought us another but suspect more food was around the corner.  And I was right. 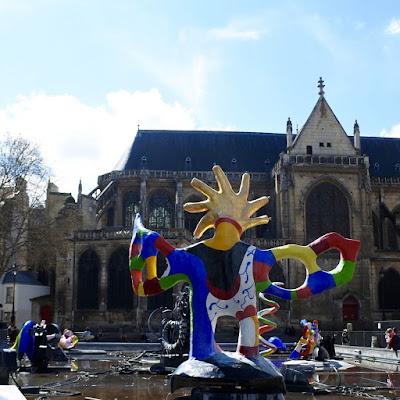 We sat in the square to the south of the Pompidou Centre while we ate.  There was plenty of space to sit on the edge of a disused fourntain.  My only memory of the Pompidou when I visited Paris with E many years ago was seeing this brightly coloured sculpture. 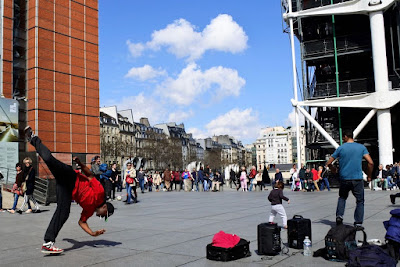 It was a fantastic position.  As we sat looking over the Pompidou, a group of break dancers were dancing sporadically in a way that made us admire their fitness and strength.  Quite a crowd was watching, including some little kids who were fascinated (can you spot the little kid with the dancers?).  As if that wasn't entertaining enough, a group of youths were have fun doing tricks with soccer balls.  When we left the dancers were gathering a crowd for a performance but we had to move on. 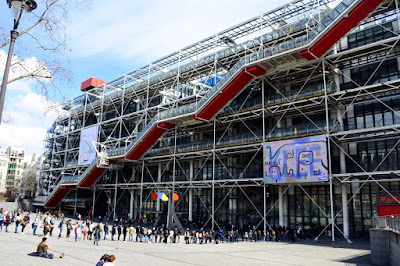 We wanted to go into the centre.  Our hearts sank at the huge queues.  One of the street artists asked if we wanted a portrait of Sylvia.  We said no.  He then told us we could walk in at a different entrance because it was free on the first Sunday of the month.  I never quite worked out what the queues were for.  We were very grateful to the man. 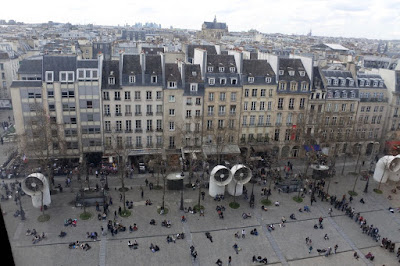 We took the exterior tubular escalator to the top floor.  The views were spectacular.  In Paris you could play the game of seeing how many iconic monuments you could spot. 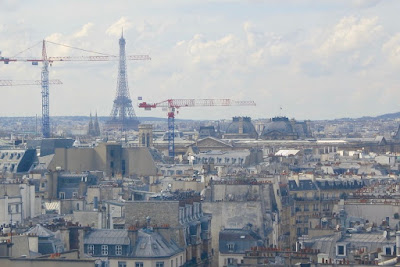 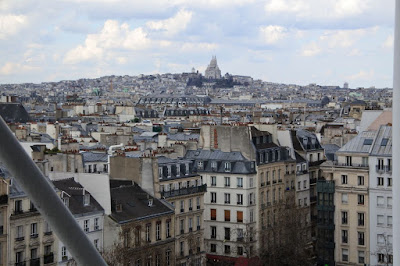 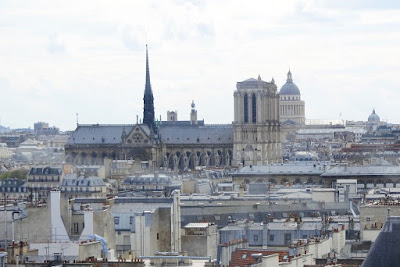 Chatelet.  I am not sure what other monuments are in this photo but they look impressive. 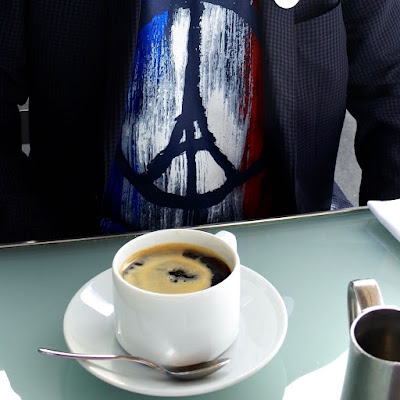 When we discovered there was a fancy restaurant (Georges) at the top of the Centre Pompidou, I had to try a chocolate fondant for dessert.  After all, we had eaten a very cheap lunch.  The place was rather expensive (58 euro or $AUD78) for three desserts and drinks.  But this is what you do on holidays.  And I love a view, especially from an iconic building.  It was a mixture of tourists and wealthy people.  You would never have guessed we were tourists from E's t-shirt. 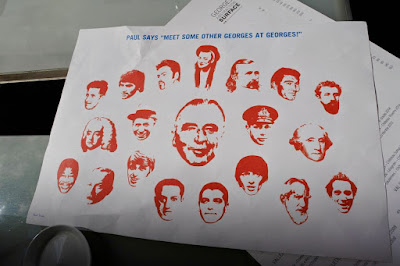 Our waitress introduced herself as Lola and left us with the menus.  I loved the fun game of "guess the Georges" on the back.  E commented that the waiters all looked like supermodels.  They were amazing to watch. 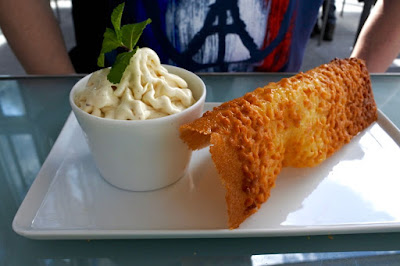 Sylvia ordered a rippled vanilla and strawberry ice cream while E ordered a vanilla bourbon ice cream.  They both came with these huge wafers which looked impressive but were actually quite sweet.  However the ice cream was the star of the show.  It was delicious. 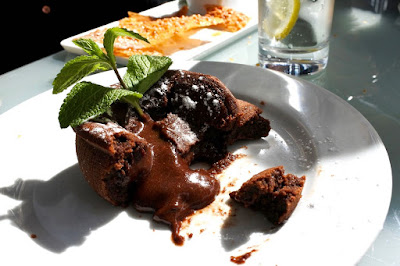 I ordered a chocolate fondant which was rich and gooey in the middle but a reasonably small size. 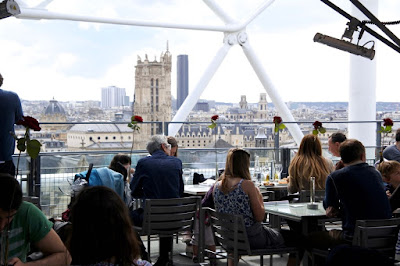 And did I mention the view.  Amazing! 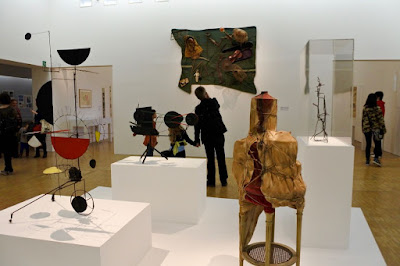 Then we headed inside to look at the modern art section.  It had some compelling paintings by Matisse and Picasso, some really interesting cubism and avant garde pieces such as a replica of Duchamps "Fountain" and some inscrutable pieces that were total mysteries to me. 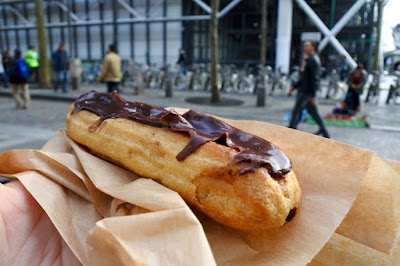 Once outside again, we went to Flunch and had sweet bakes.  Sylvia and E had doughnuts and I had a chocolate eclair.  I have probably mentioned my first visit to Lygon Street as a 17 year old when I was horrified to find the eclair filled with patisserie cream instead of regular whipped cream.  I have moved on since then.  This eclair, from a pretty regular street stall, was so good with chocolate icing on top and a chocolate custard inside. 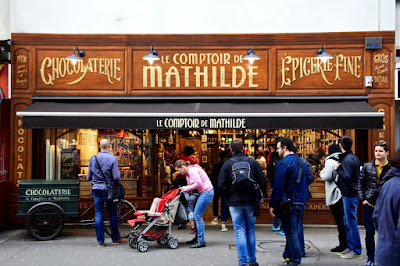 Lastly E spent time in a DVD and CD shop while Sylvia and I drooled over the amazing chocolate creations at Comptor de Mathilde.  Lollypops, chocolate pizza, hot chocolate spoons, truffles etc etc etc.  This is where I bought the orangettes I mentioned recently.

By then, the Marathon was well and truly over so we could cross the Seine to Shakespeare and Co.  I will leave that until another day.