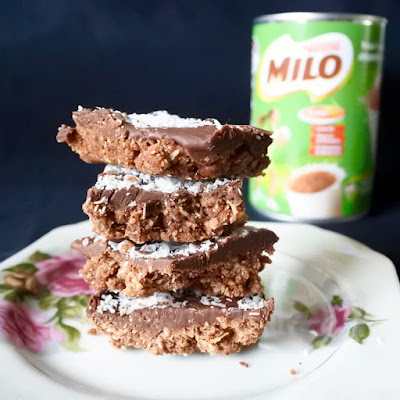 I baked this slice on Sylvia's first day back at school after our Scottish trip.  Weetbix slice is an Aussie slice that my mum made me when I was a kid.  I loved it but this one was a modern version with less sugar and the addition of milo while the icing was more ganache with leftover condensed milk than the usual plainer mixture of icing sugar, cocoa and water.

I would have liked to have gone to the ANZAC Day dawn service with my family today but I just don't have the energy after our holiday.  Instead I thought that sharing a classic Aussie slice would imbue the spirit of national pride and mateship that is part of the ANZAC spirit.  I am not sure this slice would have made it on the sea voyage to the Gallipoli Cove like the famous ANZAC biscuits.  But I think a lot of Australians would remember this slice from their childhood. 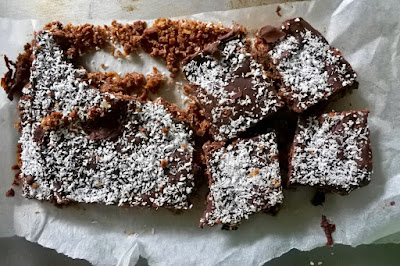 It was good to bake after being away from my kitchen so long.  And this was an easy one to ease back into it with.  Getting back into the rhythm of life is hard after a month away.  We have landed home in the middle of Autumn.  This has meant getting used to wearing warmer clothes, the evenings drawing in so much earlier, and different fruit and vegetables in season.  It is taking a while to get back into the swing of school lunches, feeding my sourdough and watering the garden.

Oh yes, and I apologise to regular readers that I haven't quite got back into finding time to reply to comments.  By the way, Kate asked why we had to turn the clocks forward twice this year.  It is because we were in the UK in Spring and will be in Australia in Spring in September.  This year we will not have the joy of that extra hour when the clocks go back in Autumn.  I could really do with any extra time in my life! 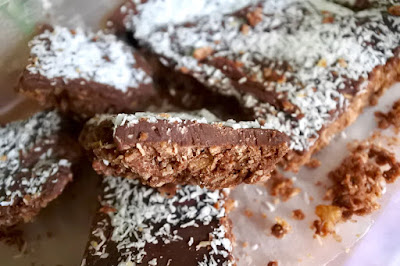 Sylvia had a lovely time crushing the weetbix though she lost count so I was a bit unsure if it was 4 or 5 in the bowl.  It was a bit crumbly and I wondered if that was because there were 5 in it.  She also loved measuring and mixing the mixture - and tasting it.  Yet once baked she decided she didn't like it.  And there I was thinking this would make a great lunchbox snack!  Kids are so fickle.

She was very fond of the weetbix and milo leftover after we made the slice.  Weetbix, which I had for cereal often as kid, has been great for breakfasts, albeit not great for the floor when she eats them without milk.  Milo, Australia's chocolate malted milk powder, is even messier and I have emphasised that it is a sometimes food not an everyday food.  Meanwhile, E and I really enjoyed the slice.  It wasn't very sweet so was not too moreish but was a delicious snack.

I am sending this slice to Tea Time Treats, No Waste Food Challenge (it used up condensed milk, chocolate buttons and butter that had been in the kitchen when we left for holidays) and Treat Petite.

Place dry ingredients in a mixing bowl.  Melt butter and milk together and pour into dry ingredients.  Press into a lined slice tin.  Bake at 180 c for 15 minutes or until slightly browned.  Cool slightly in tray.

Melt all icing ingredients together until just melted.  Spread on the slice in the tray.  Sprinkle with coconut.  Once cooled cut into squares.

On the stereo:
Paris rive droit: Various Artists
Posted by Johanna GGG at 21:40