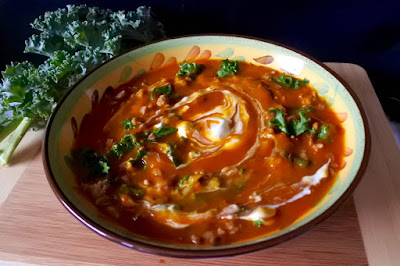 There has not been a lot of innovative cooking in our place since we got home from Scotland.  In fact I haven't been posting many soup recipes of late because I feel all my soup recipes are a variation on many that I have already posted.  What makes this soup different is the addition of tempeh crumbles.  It is definitely something I will do again and would recommend to those who are shy of tempeh.

On the weekend I went to our local farmers market for the first time in ages.  I bought kale which I knew would go into this soup.  It is fairly easy to make.  The pumpkin soup is made and simmers away while you steam the kale and make the tempeh crumbles which were very similar to these.  I need such simple recipes while we are trying to get back into the swing of life at home. 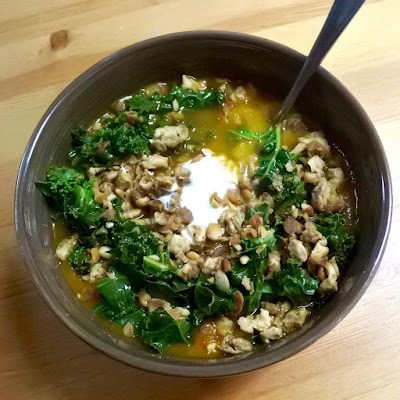 Returning to my own pantry has been a bumpy ride.  I have despaired of no tahini for this stew and only after I bought a new jar did I discover an unopened jar in the pantry.  I have made soup without smoked paprika because I forgot the new place I found for it after it fell all over the stove.  I even grabbed the wrong bottle and just stopped myself adding sushi seasoning to pizza dough instead of agave syrup.

As if my discombobulation isn't enough, the days are so much shorter since I got home.  The natural light is usually gone by dinner time.  Daylight savings has finished.  (I find it a cruel cruel thing that we are going to have to put our clocks forward twice this year!)  So when I made this soup, I took a photo (above) and the light just wasn't right. 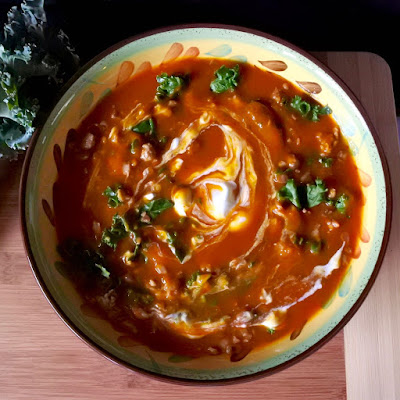 So the next afternoon when I picked up Sylvia from school, I served a bowl of soup so I could take a photo in the fading natural light and set it aside for dinner.  The textures of wilted kale and soft flavoursome tempeh crumbles was lovely and quite light.  The recipe comes from a clean eating collection.  However for a bit of substance I really enjoyed adding a couple of spoonfuls of cooked quinoa.  Perfect autumn fare!

I am sending this to No Croutons Required, Healthy Vegan Fridays, Gluten Free Fridays, Eat Your Greens and Meat Free Mondays.

Heat oil in a large saucepan or stockpot.  Fry onion for a few minutes over medium heat and then add garlic, carrots and red pepper and fry for 5 to 10 minutes until softened.  I did this while I chopped the pumpkin.

Stir in pumpkin, paprika, old bay seasoning and a pinch of salt.  Pour in stock.  Bring to the boil and simmer for 15 to 20 minutes until pumpkin is soft.

While soup is simmering, start the tempeh crumbles.  Squeeze water out of tempeh and then pat dry with a paper towel.  Crumble tempeh into small pebble sized pieces.  Heat oil in heavy based frypan and fry tempeh for 10 to 12 minutes over medium heat until it is dried and browned (ie not totally dried but just dry enough it will separate into pieces and had lots of patches of golden brown).  Once cooked mix in soy sauce and liquid smoke until absorbed (this is pretty quick).  Set aside until required.

While soup simmers and tempeh fries, it is time to prepare the kale and wilt slightly.  I did this for one half of soup in a steamer basket above the soup (5 minutes).  I did it in the microwave for the second half of the soup.  It should be wilted but still green.  Set aside until required.

To serve the soup, puree the soup.  Ladle into a bowl and top with kale, tempeh crumbles and a spoonful of yoghurt.  The soup is delicious by itself or with a couple of spoonfuls of cooked quinoa stirred through or with some bread on the side.

Notes: Instead of using yoghurt, serve with coconut cream, coconut yoghurt or nut cream to make it vegan.  Or you can leave it out altogether.

On the stereo:
Vaudeville: Saphyre
Posted by Johanna GGG at 11:11