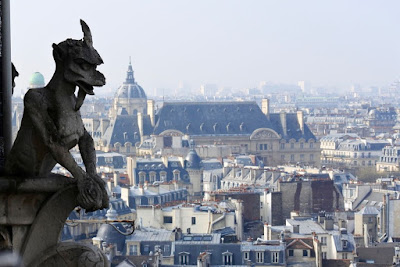 After two days of rain it was glorious to see the sun come out in Paris.  Just the day to climb the towers of the Notre Dame cathedral, to get up close to some gargoyles, to eat gooey brie in its shadow and then admire the intricate details of the entrance and then hop aboard an open top bus. 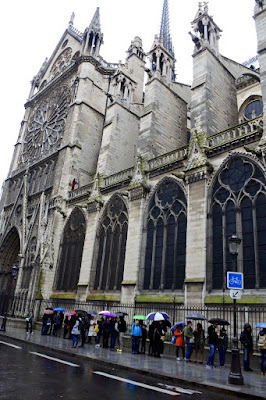 I was warying about queuing after the long long queues at the Catacombes the previous day and had seen the queues a couple of days before when we had gone inside the cathedral (see above photo).  However it was only about 20-30 minutes with lots of souvenir shops and cafes to send E and Sylvia off.  I had barely got chatting to the American behind me, avoided the little girl vomiting ahead of me, and cleaned the nutella crepe off Sylvia's coat before we were ushered in to start climbing the 387 stairs. 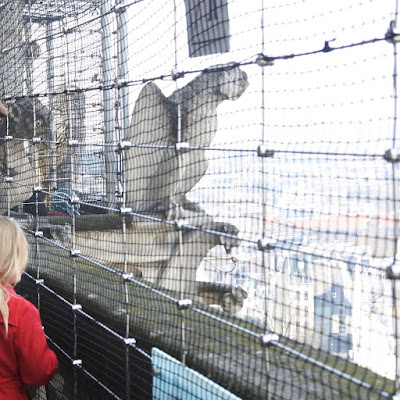 I was a little wary about climbing so many stairs but it was nothing as bad as I feared.  Not one wheeze from me.  (And climbing makes me wheeze.)  However I have very fond memories of the views of Paris and the gargoyles from a visit many years ago.  It was every bit as brilliant this time.  I didn't have memories of the grill but that did not dampen my enthusiasm.  Fortunately there were a few holes in the grill for cameras. 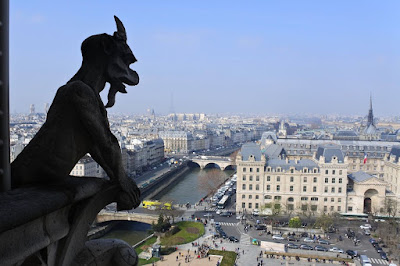 People often talk about climbing the Eiffel Tower for a view of Paris but I think this is a more splendid view.  The Notre Dame towers are more central to old Paris and closer to the ground so you get a more interesting and detailed view.  With bonus gargoyles! 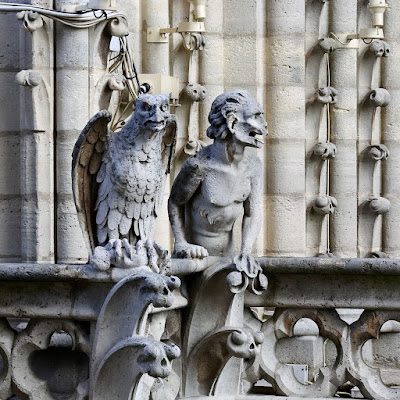 The gargoyles are worth seeing close us.  They are frightening and amusing and awesome.  What amazing craftsmanship for spouts that are so high that very few would see them.  Surely the huge work of building the Notre Dame would mean that the details were less in these higher reaches.  And yet even on the roof, the detail is astounding and awe-inspiring. 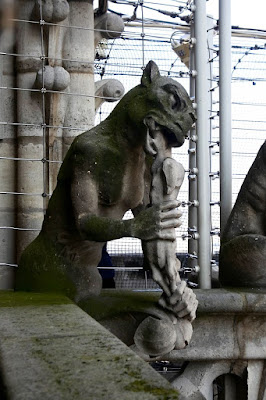 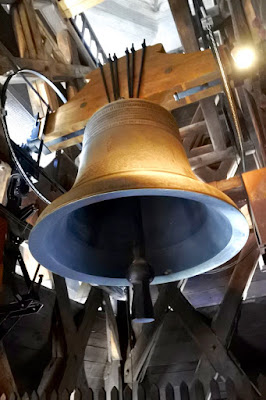 And did I mention hearing the bells up high is pretty intense.  Sylvia had to plug her ears with her fingers when the bells were ringing.  This bell apparently doesn't ring very often.  Just as well as it would deafen to be so close.  It is probably the hugest bell I have ever seen.  There is no way you could get a hand around the clapper in the middle.  It is probably as big as me. 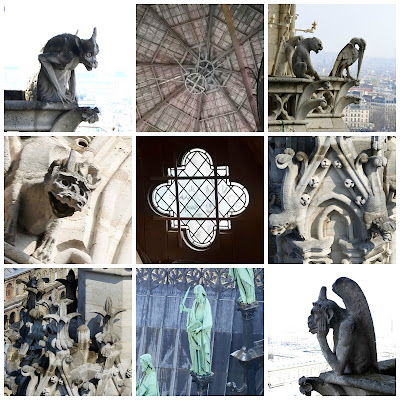 At first I couldn't believe all the amazing gargoyles.  Then I found we kept walking along and there were more.  And more. 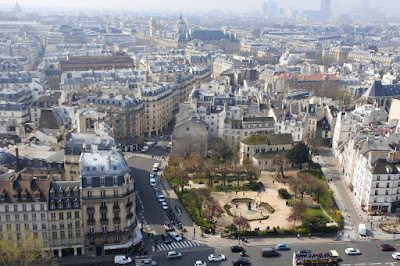 Next I left E and Sylvia to go down and I went to the very top of the South Tower.  Here is a view of the left bank.  Sigh! 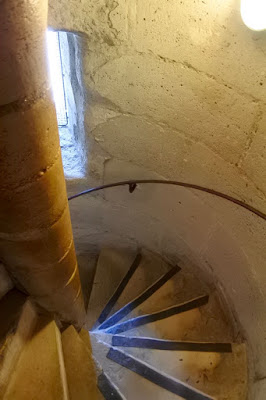 Going down seems to take forever.  It is not in stages like going up.  By the time I got down I noticed my legs were a little wobbly. 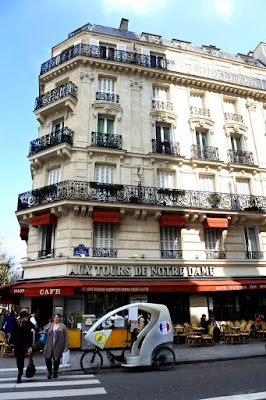 We were all ready for lunch and headed for the nearest place.  Aux Tours des Notre Dame.  Right on the corner near where we queued.  We sat outside and watched others queueing.  It was good not to be in the queue. 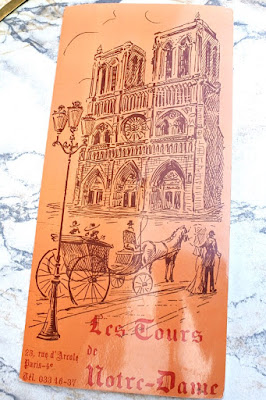 I was a bit wary of the place being a tourist trap.  However it was lovely to sit outside such a magnificent cathedral.  And it was a really lovely place to eat.  The food was delicious and our waiter was charming and attentive. 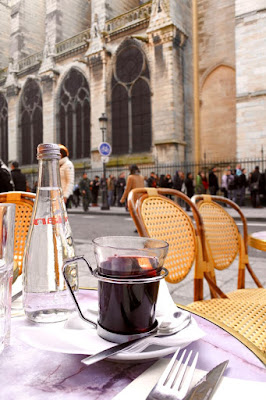 To drink I ordered a hot spiced wine.  According to E there were a few on the menu but being the tourist I am, I had seen signs somewhere for hot wine and so I just asked for hot wine.  It was warm, not boiling, with a couple of slices of orange in it.  The weather was cool enough to make it comforting to drink the warm spicy drink.  Oddly though E was told there was no milk in the cafe for his coffee.  They had run out.  At lunchtime in the school holidays!  He was fine about it. 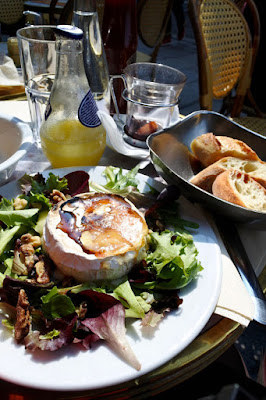 When my "roasted brie with walnuts and salad" came I noticed there were no walnuts.  Sylvia and I prodded the cheese and found it was cold.  Our waiter noticed and said it was the wrong salad.  He changed it for the one I ordered without a fuss.  And it was probably one of the nicest meals I have had in Paris.  The cheese was warm and gooey.  I loved piling creamy brie and walnuts on slices of baguette.  The salad leaves were just what I needed to cut through the richness.  Likewise, Sylvia loved her chips (frites) and E loved his croque monsieur. 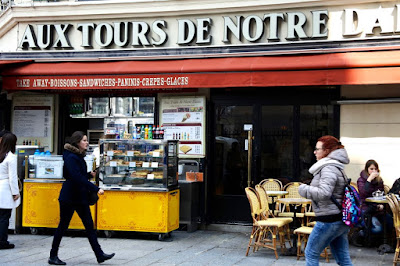 Then we were ready to go on our way.  First we had to stop and admire the entrance to Notre Dame.  I had not being able to do this a couple of days back when it was raining when we came here. 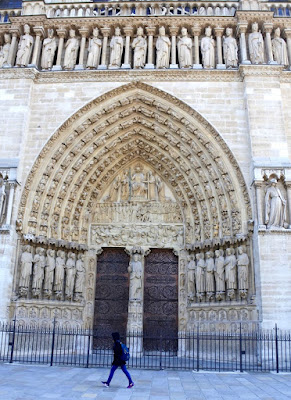 The detail around the entrance doors is overwhelming.  It was great to have time to look at all the faces.  I showed Sylvia details that caused us to laugh.  E was most disapproving.  I disagree.  I am sure the sculptors had a sense of humour. 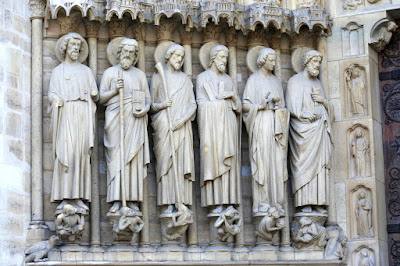 Just look at the little people struggling under the weight of the saints. 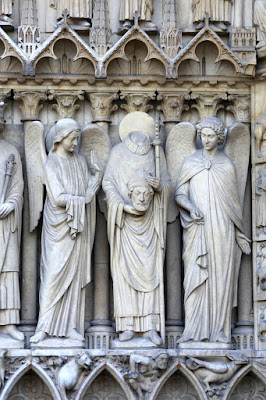 And what about the looks that the neighbours are giving the headless body! 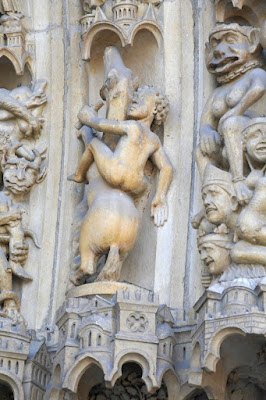 And then there is this little naked chap with demons either side. 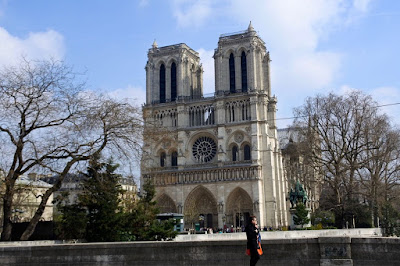 And finally here is a photo of the grand cathedral itself.  Look at how it soars above the nearby buildings, including the one where we ate lunch.  It is a joy to be staying in an apartment that is walking distance from the Notre Dame and amazing to think we climbed all the way to top of the south tower.  If you only have the chance to climb to see one view in Paris, this is the one I recommend.
Posted by Johanna GGG at 07:23