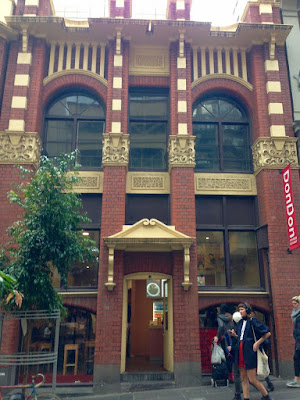 Last year I met with some former colleagues for lunch at Don Don.  I think I might have been there many years ago with some friends from our travels who absolutely raved about the place.  Since then E and I have been there for a few quick and cheap dinners before going out, the last one being last week before seeing Blur. 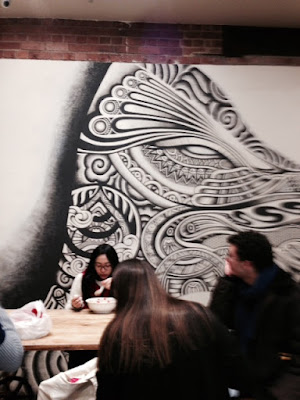 Before Sylvia was born, we were fans of Gopals for its quick and cheap food.  If you don't want any choice about your meal then Don Don is every bit as quick and cheap, maybe more.  I have been enjoying it but it is not all vegetarian like Gopals.  The menu is small.  Vegetarians have a choice of tofu curry don, soba salad and miso soup.  I have stuck with the tofu curry don which is a bargain at $5.90. 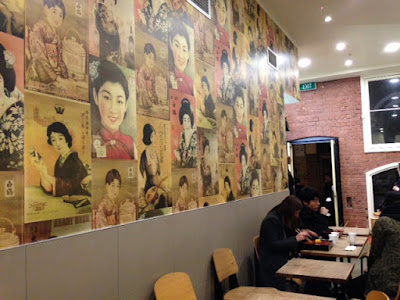 It is indeed cheap and cheerful with plastic bowls and spoons.  The tofu curry don consists of lots of rice and Japanese curry sauce with tofu, a token vegetable (I have had zucchini and cauliflower) and some pickled vegies.  The meal is pretty basic and not as generous with vegies as I would prefer.  But for the price it is a decent feed. 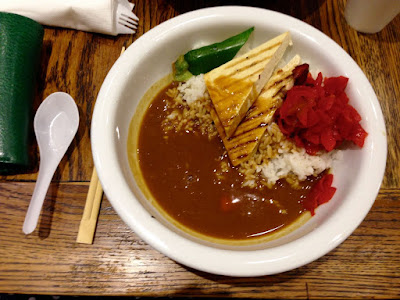 After dinner we had enough time to go to ACMI Cafe for coffee and cake.  It is some time since we have been there.  When Sylvia was a baby and went where we went, we visited quite a bit.  (Unlike these days when we go where she goes!)  So I couldn't help looking out at the highchairs and space for strollers to see that it is still very child friendly.  I suspect that Sylvia would love the booths that are new since our last visit.

E had a coffee with a very nice biscuit.  The range of herbal teas was too limited for my tastes so I had a ginger beer with a slice of warm chocolate mud cake with lots of lovely gooey ganache on top. 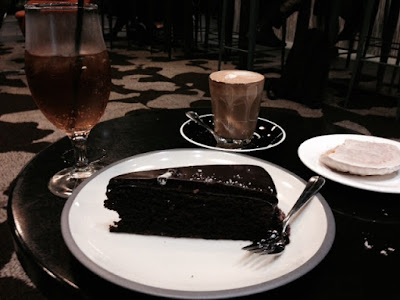 The main event was the Blur concert at the Rod Laver Arena.  I didn't take a lot of notice of Blur when they were at the height of their fame but I have great memories of dancing to their music in nightclubs and of spending time with friends in London who were the sort of fans who lived for backstage passes to Blur gigs.  The band is also a sentimental favourite because one of the CDs that E bought when we were first going out was a Blur EP. 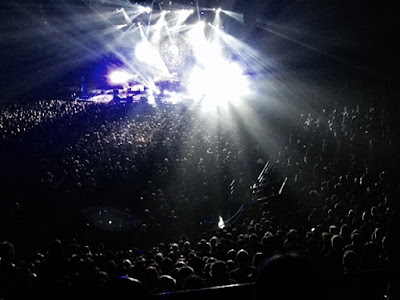 When E and I left the concert we turned to one another and said, wow that was so much better that I expected.  It was a fantastic concert.  Even sitting up the back, we were immersed in the energy of this amazing band, though shielding our eyes from the intense light show at times.  Their songs are beautiful and moody and cheeky and fun.  The band members are such fascinating people.  (Did you know that the drummer is a practicing criminal lawyer, a computer animator and a political activist?)  It was their first gig in Melbourne for 18 years and I am so glad we were there because who knows when their next gig will be.