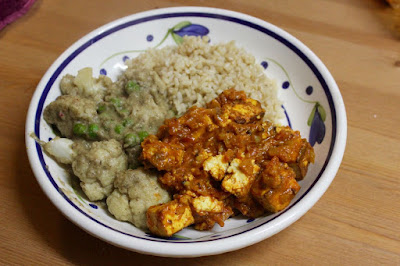 It was the end of a busy week during the school holidays.  I was late making dinner, E was late home and Sylvia was late to watch her film.  She bore it well, ate beans on toast while I chopped and fried and stirred.  She complained about the noise of the paneer frying and then snuggled up with us on the couch to watch How to train your dragon. 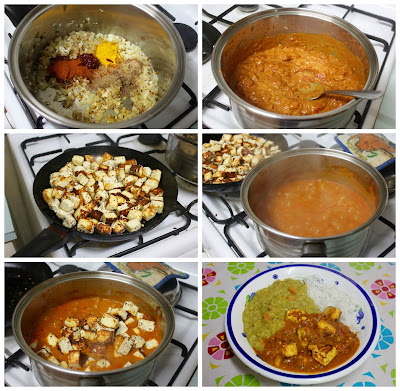 I had been meaning to make the Paneer Tikka Masala for some time.  At the start of the week I had made dahl to eat with the masala.  It took me a week to find time to make the masala so fortunately we had the big pot of dahl to tide us.  By the end of the week I still had some left. It made a fine accompaniment to the masala. 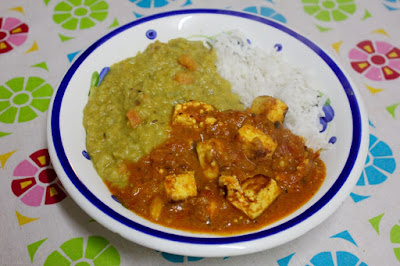 The masala seemed to last a long time.  I made a cauliflower in spicy peanut gravy (with cashews instead of peanuts and peas instead of the leafy greens) that I had made years ago and it was really nice but very grey.  I made the sauce in my high speed blender which made it smoother than my previous attempt. 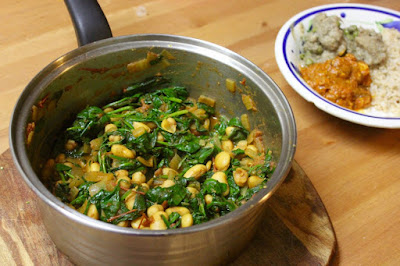 A night or two later I made another curry with spinach and chickpeas.  The recipe methodology needed some slight tweaking to work for me so.  However it was a great simple fast recipe that I hope to make again.  I particularly like that it uses lots of chickpeas for those on the aquafaba bandwagon. 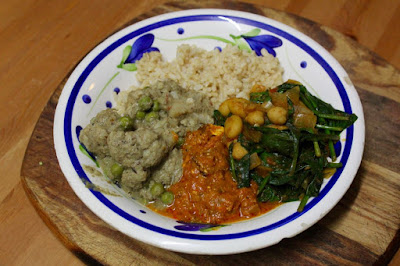 I was very pleased to have three curries to serve together.  I love lots of curries but only manage to make them on different nights.  However by the time I had eaten the spinach and chickpea curry over a few nights I had had my fill of curries.  I blended the leftovers with some vegies to make a very good soup.

I am sending the Paneer tikka masala to Gluten Free Fridays and the Spinach and chickpea curry to Healthy Vegan Fridays.

Brown onion in 2 tablespoons of olive oil in a large saucepan.  Stir the ginger and garlic in for 1 minute.  Stir in the spices to make a paste.  Gradually stir in the yoghurt and then then tin of tomatoes.  Simmer for 5 minutes.  Add the stock and simmer uncovered for 25 minutes.  It should reduce thought mine didn't that much.  (However once it had sat for an hour or two it thickened a lot.)

While tomato mixture is simmering, fry paneer in remaining oil over medium high heat until golden brown.  I did this in two batches.

Mix tomato mixture, fried paneer and salt.  Cook another 2 to 3 minutes and serve with rice or naan bread.

Fry the onion in oil until soft.  Stir in curry paste for a minute or two.  Add tomatoes and chickpeas.  Cook on medium to medium high for about 5 minutes until thicken slightly. Add spinach and cover for about a minute or two until it is wilting.  Stir in seasoning and lemon juice.  Serve with rice.

On the stereo:
Melt: Straightjacket Fits
Posted by Johanna GGG at 12:54