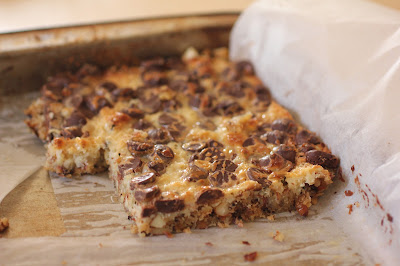 So according to The Age newspaper, Melbourne is the world capital of food allergies.  I can confirm that this makes contributing food to social gatherings challenging.  My nieces and nephews present a challenging picture.  We now have a dairy allergy as well as vegetarian, peanut allergy, and celiac (as well as general nut allergies on the other side of the world).  So when we gathered for my brother's birthday on the weekend I decided I would make something sweet to please everyone but it seemed my energy levels weren't quite up to it. 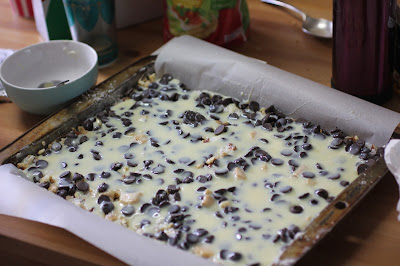 I am still dealing with too many photos cluttering up my hard drive, spending evenings doing silly things like looking for a car key only to find it had fallen in a shoe, and testing recipes that have been labelled by Sylvia as 'too vegany'.  So I decided I would make something on Saturday morning before her gymnastics class.  However upon checking my recipe for home made soy condensed milk I found that it would take a good hour plus need cooling time.  By the time I read this, I had started making condensed milk with coconut for a nirvana slice. 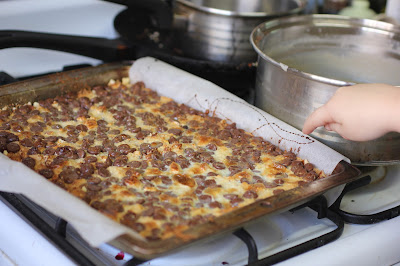 It all got too much and I opened a tin of dairy condensed milk so that I could get the slice cooked in time.  It was still warm when I loaded it into the car.  We arrived at my parents' place after everyone else had eaten lunch and were ready for the birthday cake.  We were too ravenous to be polite and wait til the cake was over to eat our dinner.  It was so chaotic that I never took out my camera until slice had been served and some leftovers had been given to other members of the family. 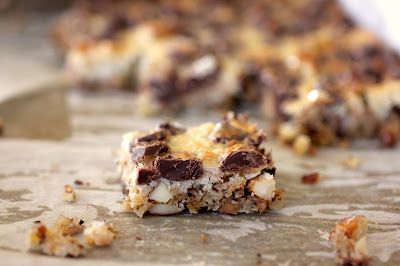 I really liked this slice though I agree with Sylvia that the almonds were not so successful in it.  It was similar to this one and this one.  I would like to try it again with home made condensed milk.  Then it would be both gluten free and vegan.

The recipe on Gluten Free Goddess called for biscuit crumbs.  I happened to have a 65g packet of Freelicious tea biscuits and used ground up corn cakes for the rest of the bulk.  I quite like the sound of the Nirvana bars at The Vegan Project that use ground almonds and oats instead of biscuits, and coconut milk and maple syrup instead of condensed milk.  Many more experiments are required.

And the coconut condensed milk I was making actually turned out really well.  I gave it to my sister whose little girl is having reaction to dairy.  Hopefully she will get some use out of it.  I am going to experiment more with it as I have a particular fondness for condensed milk in all forms.

I am sending this post to Carole's Food on Friday which is celebrating all things coconut this week.

Preheat oven to 180 C and line a swiss roll tin with baking paper.  Melt butter and pour into prepared tin.  Spoon over biscuit crumbs, mix with butter and pat with the back of a spoon to evenly cover the pan.  Scatter with nuts, coconut and chocolate.  Pour condensed milk over the rest of the ingredients.  I stirred them a little to make sure they were mixed.  Bake for 20 to 25 minutes until puffed and golden brown on top.  Cool in tray and then cut into squares or bars.

*NOTES: I used a mixture of ground tea biscuits and corn cakes for the biscuit crumbs (nb in America these are called cookie crumbs).  I used dairy condensed milk but the Gluten Free Goddess made it with coconut condensed milk so I am sure a vegan one would work here too.  I hope to try it some day.  The Gluten Free Goddess called for coconut flakes but I only had dessicated coconut - will try it with flakes when I have some.

On the Stereo:
Reading, Writing and Arithmetic: The Sundays
Posted by Johanna GGG at 22:55