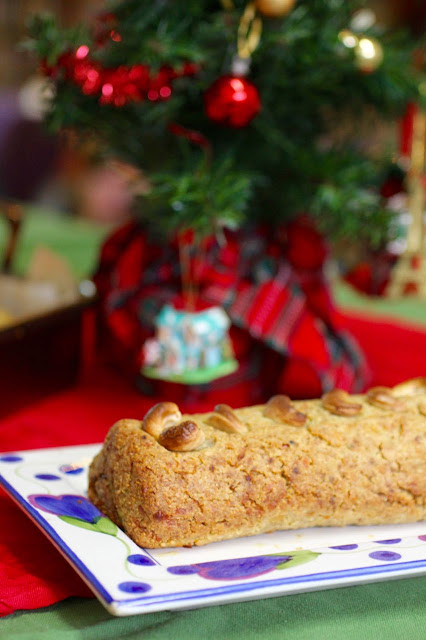 As a lover of nut roasts, I sit up and listen when someone else tells me they have a favourite nut roast they have been making for over 25 years.  So when Kate of The Gluten Free Alchemist posted a favourite Stuffed Cashew Nut Roast I couldn't wait to try it.  While they are perfect for Kate at Christmas, I waited until our winter to make a nut roast for the winter solstice and another for Christmas in July dinner party. 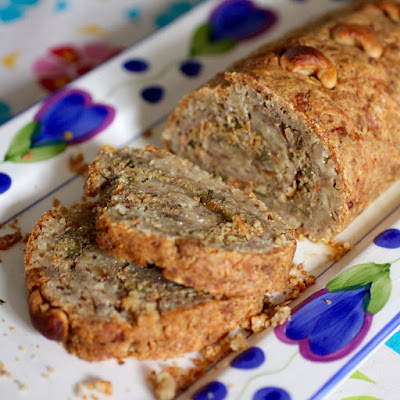 I have posted 31 nut roast recipes in the eight years that I have had this blog.  Yet in all this time I have two types of nut roasts that have lingered on my to do list.  The long list has not had one stuffed nut roast nor one nut roast in pastry.  This nut roast is rolled up like a roulade.  Roulades intimidate me.  Yet Kate was reassuring that it wasn't so hard. 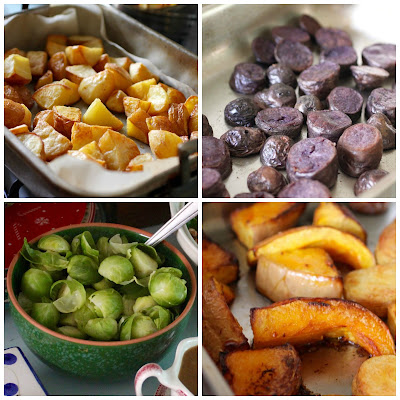 Finally I summoned up the courage to try this nut roast for a winter solstice roast dinner.  It wasn't so hard and it tasted amazing.  We had it with roast (white and purple) potatoes, roast pumpkin, boiled brussel sprouts and gravy.  It was delicious.  Sylvia even had a little nut roast. 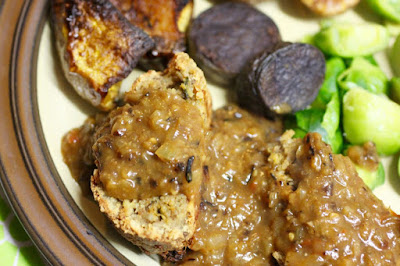 My main concern was that there wasn't so much of a swirl as was so clear in Kate's slices of nut roast.  However I agreed with her that it sliced up beautiful and tasted amazing when cold.  In fact for a bit of fun I made my own roast dinner sandwich with some leftovers.  The Home Alone sandwich at the new Smith and Deli vegan sandwich bar has wowed everyone with a vegan American roast dinner in a sandwich.  This is my Australian version: nut roast, roast potato, roast pumpkin, peas and gravy. 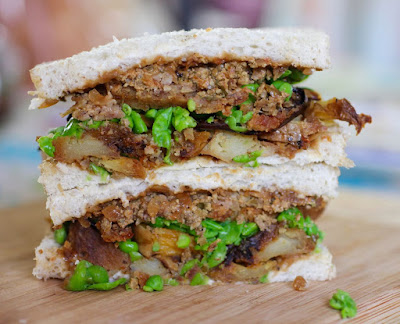 When I made the nut roast for the winter solstice, I was already thinking about a Christmas in July dinner party I had organised with a couple of families from Sylvia's school this weekend.  It seemed the perfect nut roast to serve.  I prefer tried and tested recipes when cooking a meal for others, especially one that looks and tastes impressive. 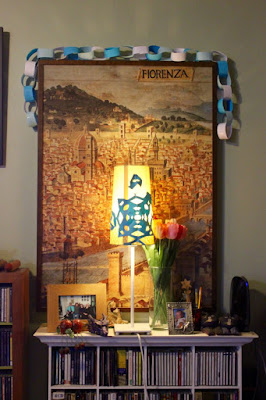 A couple of days before the lunch, Sylvia and I made paper chains and paper snowflakes.  Do you like her idea of sticking a snowflake on the lamp?  On the morning before everyone arrived we dug out a little plastic Christmas tree, cds and some other festive touches.  I set our kitchen table for the adults and had the children sitting around the little table.  Sylvia helped me lay out the cutlery and E did a last load of dishes. 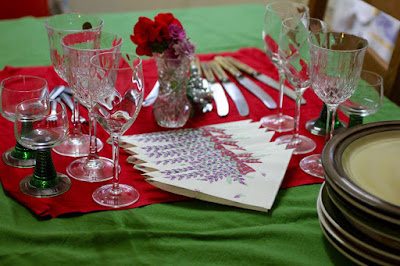 I wasn't sure exactly how many people we would have, given some illness and the possibility of a couple of last minute guests.  By the time everyone arrived it was pouring rain in a most wintery fashion and we had 6 adults and 5 children.  All the food was prepared and just needed a bit of reheating, other than chopping up brussel sprouts. Benchtops were cleared and serving dishes were laid out.

The previous day I had made nut roast (up to the chilling stage), gravy, gingerbread biscuits and chopped up the potato and pumpkin for roasting.  My mum would sometimes put the vegies for roasting into water in advance when preparing large dinners so I did this overnight.  In the morning I roasted the vegies for about an hour, cooked the nut roast, made pizzas and put the gingerbread stars together into a Christmas tree. 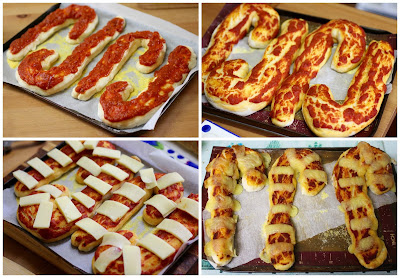 I had decided that the children would need feeding first so I had the candy cane pizzas ready when they arrived.  I had tried candy cane pizza last Christmas and it was not quite right.  This pizza looked better because I baked the pizza with the tomato sauce on it and only put the cheese on it in the last 5 minutes.  However when I tasted some leftover pizza later I thought it tasted a little on the doughy side, possibly due to me messing with a favourite pizza base recipe.  The kids seemed to enjoy it.  In fact they loved all the festive touches. 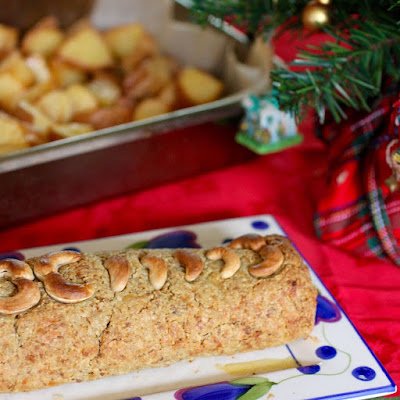 Meanwhile I was reheating the nut roast , gravy, roast potato and roast pumpkin while boiling the sprouts.  Naomi brought along a bottle of red wine and a lovely beetroot, feta and greens salad.  By the time the adults were settled down to the meal and the kids were just about finished and creating mayhem in Sylvia's bedroom. 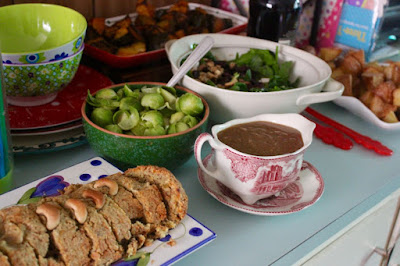 Everyone loved the nut roast.  Quite a few guests had never had one before.  They were impressed and few of us had seconds.  There was only a small crusty piece remaining when we finished our meal.  The kids were too busy running about to taste any but I think they sampled some roast potatoes. 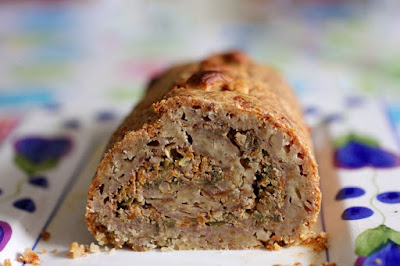 I didn't get any photos of the inside of the nut roast at the Christmas in July.  I had thought I might photograph the leftovers but there was nothing worth photographing.  So instead here is another picture of the inside of my first nut roast which looks far neater because it was sliced cold.  You can see a bit of a swirl.  I hoped for more swirl in the second but I don't think it was any more obvious.

Swirl or no swirl, it was an excellent nut roast and you don't just need to take my word for it.  E thought it more cheesy than many of my nut roasts.  Being baked like a roulade meant it had more crispy edges and it is not too stodgy with the carrot filling. 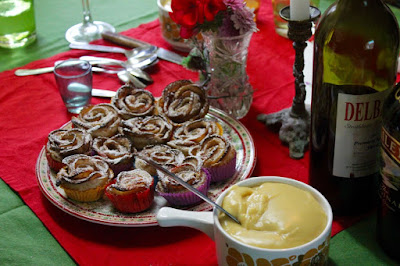 For dessert Kerin brought over a tray of apple rose tarts.  They looked so gorgeous and were delicious with custard that I cooked up while they baked.  Sylvia was smitten with the custard but her friend said it tasted of nothing.  Kerin also brought along a bottle of Baileys Irish Cream which went very well with the tarts and warmed us in the dark wintery afternoon. 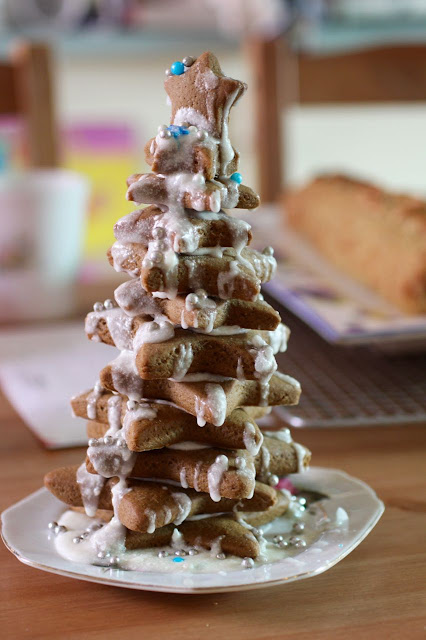 I had also made a gingerbread Christmas tree with my graded star cutters.  Sylvia had a lovely time helping to put this together and scattering cachou baubles over the tree.  I thought it would be a festive table decoration.  However Sylvia wanted it on the kids table and then it was removed from it while they ate pizza.  I was surprised that they kids demolished the tree, even with the gingerbread people that Kerin brought along. 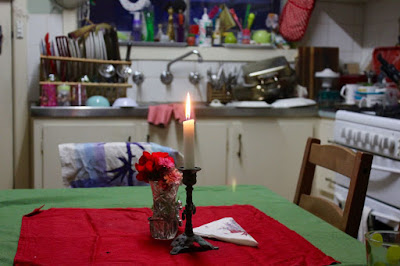 We were pleased the skies cleared enough for the kids to run about outside while we had a cuppa.  Then it was time for everyone to find their coats and head home.  We did dishes and tidied up and then collapsed in front of the telly with some leftover pizza for dinner.

I am sending this post to Jac for Meatfree Mondays, Karen for Cooking with Herbs, and Michelle and Helen for Extra Veg.

First make the stuffing.  Fry leek in the oil over medium heat for about 5 minutes.  Add grated carrots and fry about 10 minutes until cooked through.  Remove from heat and stir in remaining ingredients.  Set aside to cool while you mix up the outer layer.

To make the outer layer mix all ingredients together to make a slightly sticky mixture.

Starting at the long end, use baking paper to assist you roll the nut roast up tightly.  It will be very fragile.  If there are any cracks, now is the best time to patch them up with your fingers.  Kate suggests smoothing over the seam where the rolling finishes but I find it easier to put the seam on the base.  Place cashews on top to decorate and wrap in baking paper.  Chill in fridge for at least an hour.  It can be made the day before and chilled overnight.

On the Stereo:
White Christmas: Bing Crosby
Posted by Johanna GGG at 23:02