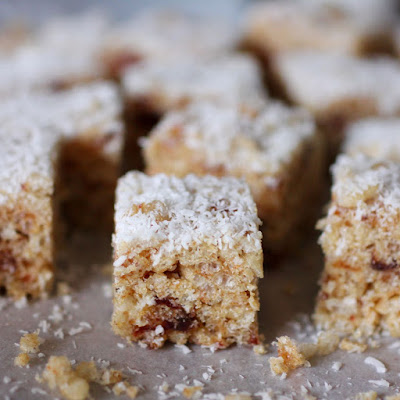 Just as the Brits have their traybakes and Americans have their bars, Australians have our slices.  These are traditional baking or no bake sweet treats that have been made by generations for fetes, cake sales and lunchboxes.  The are usually easy to make and kids love them.

I stumbled upon this great article in the Age Epicure called Slices to Savour.  As well as lots of great recipes it has a wonderful introduction to slices that I highly recommend you read.  The author writes of the reassuring nature of the humble slice that has been comfort food for Smiths, Jones and O'Briens. 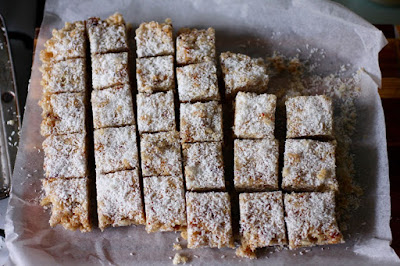 I have already shared many slices that I grew up with.  Chocolate caramel slice, Coconut ice, Hedgehog, Lemon slice, Marshmallow weetbix slice and White Christmas were all regular fixtures in my childhood and continue to be my comfort food.

Upon reflecting on them, I notice that they feature some common ingredients.  Condensed milk, Marie biscuits and various cereals are often included because these would be shelf stable pantry items.  The other ingredients are butter, sugar, dessicated coconut, dried fruit and other items that would be easily found in most traditional Australian kitchens. 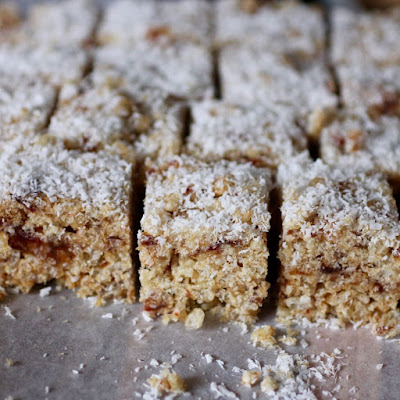 In recent years I have discovered the rice krispie slice that seems so popular in America.  I love it because it reminds me of Aussie slices but it has problems a bit like our Aussie chocolate crackles (which use an old fashioned copha that I now avoid). It is traditionally made with marshmallows which have gelatine are aren't really vegetarian.  There is a great vegan alternative that I have made with nut butter but this makes it unsuitable for sharing in schools and cake stalls that are often nut free.

I was delighted to discover this date, coconut and rice bubble slice recipe that the editor had begged from the author of the Slices to Savour article.  This slice has the pleasing crunch of rice bubbles held together by fudgy dates.  The dates make it healthier than rice krispie slice but it had enough sugar and butter that I would not claim it is health food.  It was like wonderful comfort food.  I would beg for the recipe too.

I love this recipe so much that I want to share it widely.  I am sending it to Jac for Bookmarked Recipes; Camilla and Helen for Credit Crunch Munch: Kimmy for Healthy Vegan Fridays #54; Lisa, Lauren, and Danielle for Fabulous Foodie Fridays #58; and Emily for Recipe of the Week.

Gently heat dates, sugar and butter in a medium saucepan over low heat (do not boil) for about 15 minutes until dates are mushy.  Stir in rice bubbles and coconut.  Spread into a lined slice tin*.  Sprinkle generously with coconut.  Chill in the fridge to set about 2 hours.  Return to room temperature and cut into squares.

*NOTES:  The original recipe calls for dried dates but I used medjool dates because I had them to use up.  Rice bubbles is what Australians call rice krispies.  I used a vegan margarine.  A slice tin is 18 x 28cm.  I found that if the slice was kept in the fridge, that it would shatter when cut or eaten.  It is best kept at room temperature to be chewy and fudgy.  I think ours lasted about a week.

I slightly changed the recipe because I was so sure the coconut would be mixed in with the dates and once I discovered it called to toss the slice in the coconut instead I was too set on mixing it in.  Tossing it in coconut seemed too much work so I just sprinkled it on top.  I would quite fancy trying it with melted chocolate on top.

On the stereo:
Great Big World: Justine Clarke
Posted by Johanna GGG at 12:09