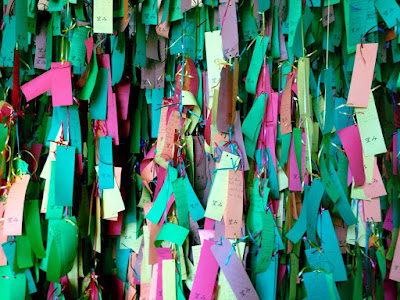 I look forward to the school holidays because it seems like that will be a break and then they are so crazy busy that I look forward to school going back because I think that life will be easier with Sylvia at school but it still doesn't slow down.

So here I am struggling to find time to blog because my photos need sorting because there are too many on my computer, my external hard drive is too full, I am doing some recipe testing for Leigh Drew and I have already had Sylvia home sick one day this term (which started on Monday).  And I just want time to listen to Jon Faine on the radio (after his 6 weeks leave) and read All the Bright Places which I am loving.  But let me squeeze in some time to write about some outings and craft sessions during the holidays. 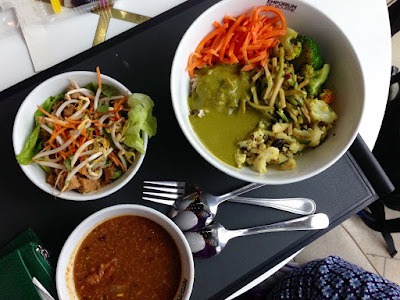 Sylvia E and I saw the Minions movie at Melbourne Central.  It was lots of fun especially if you love 1960s Britain, as well as silliness.  Afterwards we went across the walkway for lunch at the Emporium.  I tried Supercharger for the second time.

Though others love Supercharger (Where's the Beef, Veganopoulous, The Good Hearted) I am still not won over.  I like that it is vegan and healthy.  However I find the menu overwhelming, the mixture of cold and hot dishes doesn't work for me and although I sort of enjoyed my meal in the holidays it was just too spicy.  I want to like it but I think I need to try other places in the food hall.  At least I was so full from the huge meal that I didn't need dessert because E and Sylvia chose frozen yoghurt, which is crazy in the current chilly Melbourne winter. 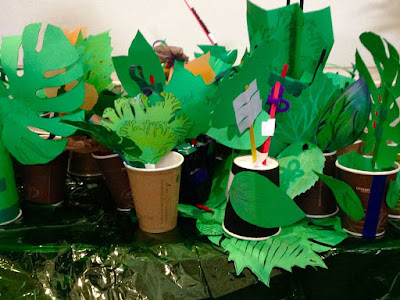 I have mentioned an outing to the city with Sylvia and her friends to the Immigration Museum.  They do such great craft sessions during the school holidays.  The session they went to was make your own pot plant.  It was probably just as well that we left them behind so we weren't carrying 5 paper pot plants through the city but they did look cute.

The kids then had a fun time at the museum with the replica ship, playing shipwrecks which seemed to involve carrying a drowned kid to a seat and then praying over them.  We also added some wishes to the wishing tree (top photo). 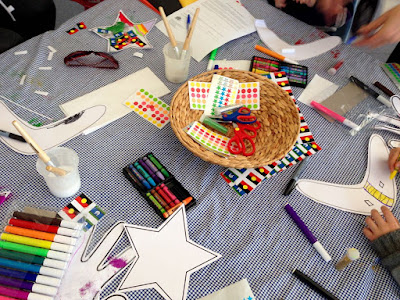 It was nice to see a few school friends at a NAIDOC craft session at our local neighbourhood house with a bonus playtime at the next door playground afterwards.  Sylvia asked if we could go back there next year. 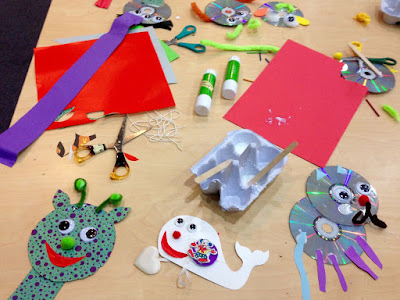 After the NAIDOC session, we went into the library for a quick look at the books and a kindly librarian invited us to join in the craft session that was just starting.  She noticed the reluctant look on my face but by then Sylvia was racing towards the room.  There was no stopping her.  I usually love some craft but this was our third craft activity in two days.  Despite my craft fatigue, we had fun doing the CD animals.  I tried to make a green giraffe which actually looked more like a slug.  Sylvia made a cat and a whale. 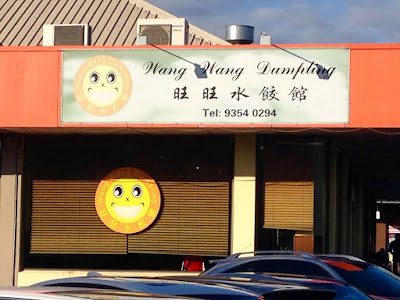 Between the craft sessions we went to Wang Wang Dumpling for lunch.  It is the second time I have been there.  It seems odd to me that how this restaurant sits in the middle of a supermarket carpark.  It is convenient if nothing else. 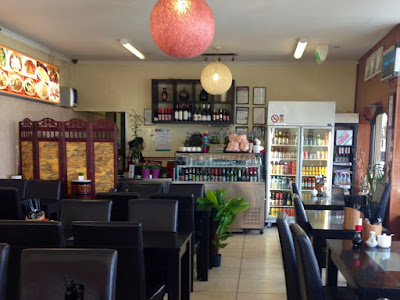 Wang Wang Dumpling has no pretensions to be anything other than a suburban restaurant but it is friendly and clean with an extensive menu and delicious fried dumplings.  When we arrived there was a family group, a business meeting and a couple of friends.  I took the above photo after we had lingered and most of the lunchtime crowd had left. 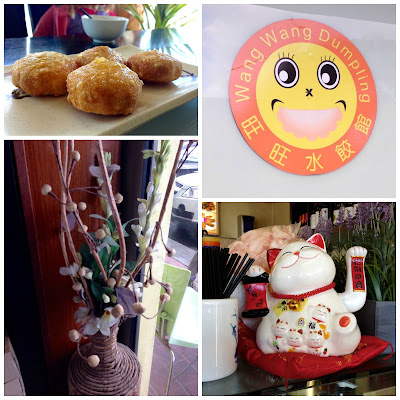 The menu had a few vegetarian options such as fried rice, fried noodles, and Cindy mentioned they make their own noodles.  (See her review at Where's the Beef for the menu at the bottom of the post) I was there for a plate of dumplings.  However I was intrigued at the fried pumpkin cakes.  This sounded to me like the slices of pumpkin fried in batter that I get occasionally at a fish and chip shop.  Obviously this was my Anglo Celtic brain at work!

I was quite surprised that it was actually a fried pumpkin skin around a slightly sweet red bean filling.  I ate it with soy sauce but wasn't sure I should.  I was assured it was vegetarian but now wonder after a friend read me the ingredients of her red bean cakes which had lard in them.  If anyone knows about these pumpkin cakes, I would be interested to hear more. 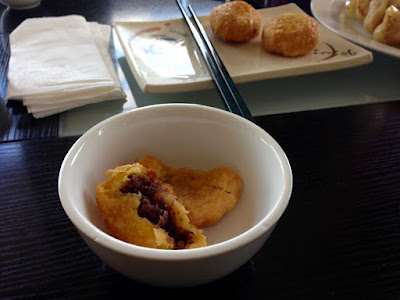 Meanwhile Sylvia now can read enough to peruse the menu herself.  I was amused that she went straight to the drinks menu and ordered a strawberry milkshake.  It was huge and sweet but she seemed to enjoy it, even if she didn't get through it.

Then our vegetable dumplings arrived.  They were full of chopped vegies (carrot and cabbage?) and delicious.  Not quite up to ShanDong MaMa standard but I would return for more.  Sylvia had fun trying to work chopsticks and ate some dumpling skin.  It was a lovely meal though quite heavy with all the deep fried food. 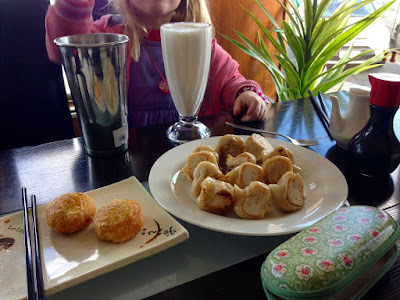 Sylvia and I had a few other craft sessions.  She did some paper snowflakes at a holiday program so we made paper chains and snowflakes for our Christmas in July.  We also had a painting session early in the holidays when we were fresh.

I'd like to tell you more but I am off to try and sort out my photos.  Though the school holidays were busy, I really can't complain because we had lots of fun and we are lucky to live in a city that offers so much good food and great programs.