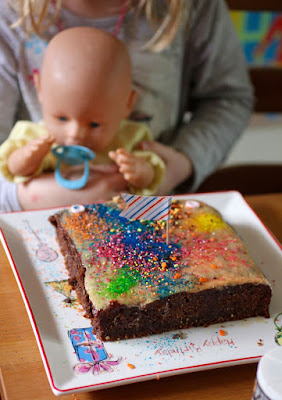 I had just finished mopping the floor and Sylvia told me she needed to cover her doll's birthday cake with sprinkles.  What else is there to do in a nice clean kitchen other than make mess.  In a fun way of course!  Which just about covers everything in this post.  Let's talk about cakes, birthdays and fun times in the holidays but first indulge me in a little whinge about kids and their mess.

Some days there just seems no let up with kids.  No sooner is one load of washing away than the washing basket is full of her stained clothes.  As soon as I tidy our loungeroom, Sylvia pulls everything out to create another house.  Last night she was at a sleepover and returned with her glasses in her bag minus a lens.  It has since been found.  Phew! And I shouldn't complain because I have had lots of wonderful cuddles.

But I did love eating breakfast in 6 minutes this morning rather than watching Sylvia spilling rice bubbles all over the table and yoghurt flying everywhere.  In fact it sometimes seems more food finds its way across the kitchen than into her mouth.  After sweeping up the rice bubbles I grab the cloth to wipe yoghurt from the table and the floor and her clothes.  Next week we will be back to school mornings with the clock watching so that we get to school in time.  But enough whinging! 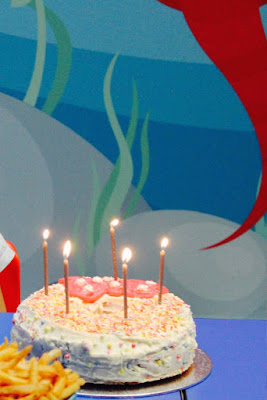 Let's return to cheerier topics like birthdays.  Not only are kids messy.  They are also lots of fun.  (Hmmm ... I am sure these points are not unrelated.)  There have been lots of birthdays in the school holidays.  We went to the other side of the city for a birthday party at a kids play centre over the holidays.  Sylvia loved it so much that she decided that is where she will have her next birthday party.  (There are always many plans for her next birthday party.) 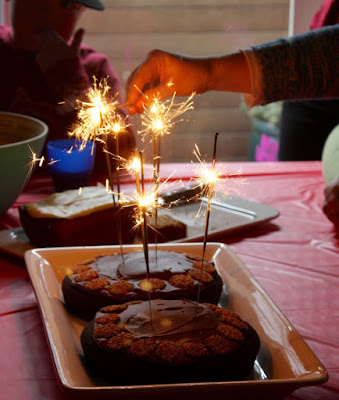 We also went to Geelong for the birthday of my niece.  The sparklers on Maddy's birthday cake were very impressive.  And the cake was lovely.  I took along some grubs which disappeared quickly.  Sylvia had a great time playing with her cousins.  It was hard to convince her to leave because she was having such a great time bouncing on the trampoline and throwing the netball about.  Yes, the girls were doing both at the same time. 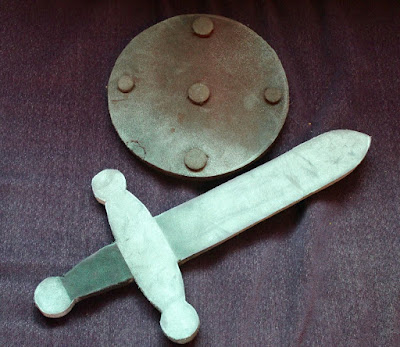 The last birthday party was a school friend's and the theme was How To Train Your Dragon.  I was most impressed at her dad's first go at a novelty birthday cake in the shape of Toothless the Dragon.  It looked amazing.  I also loved the loaves cut into sandwiches with flags on top and skewers stuck out on the side like oars on viking long boats.  Sadly I didn't take any decent photos.  So instead I give you a photo of the foam sword and shield that each kid got to take home. How cool is that! 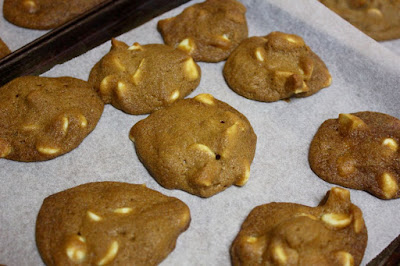 We had a trip to the supermarket where I bought white choc chips and dried apple for Sylvia and promised her that I would make choc chip cookies with them.  Then I worked out a recipe I could make, only to find it was quite similar to a white chocolate chip and ginger cookie recipe I made last December.  Obviously I like the ginger and white chocolate chip combination. 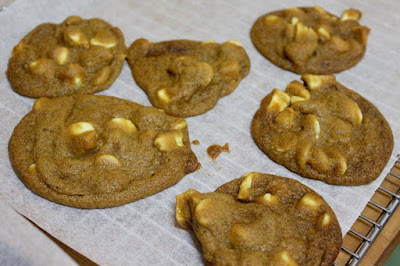 The big difference was that I used aquafaba in these.  While I find eggless cakes are fine, I often find that vegan choc chip cookies can be quite soft.  I wondered if the aquafaba might make them crisper.  I had great hopes with these ones.  They were round and airy when straight out of the oven.  Soon they had collapsed into chewy cookies with crisp edges.  By the evening they were disappointingly soft.  Despite the texture not being quite what I had hoped, they were delicious and very moreish. 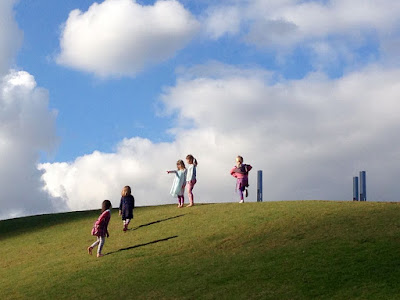 The next day I took Sylvia on the train to the city with a few of her friends and their mums.  We did some craft and then had lunch.  I took along the cookies but by the time we arrived they were in pieces.  Which made for easy sharing. After lunch we went to the Birrung Marr park where they rolled down hills and got quite grubby. 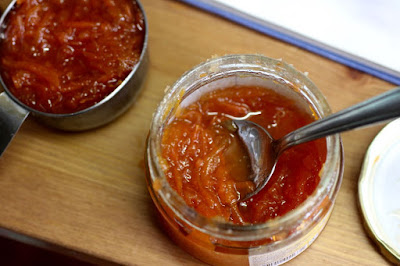 Yesterday I finally made a cake that has been on my mind.  I made this chocolate coconut and date cake many years ago.  It is an intriguing recipe made with dates, tofu, coconut cream and honey.  Almost vegan.  Full of healthy ingredients.  I suspect these days the recipe would use coconut sugar instead of brown sugar.  However instead of the sugar and milk, I used some carrot jam. 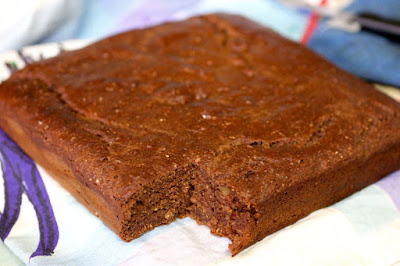 Sylvia had requested a cake for Rosie's birthday.  (Rosie is her dolly getting most attention at the moment).  There has been much planning for this birthday.  Always planning for a birthday here.  The cake was so good that we were snacking on it while warm.  (Hence the odd shape.)  However strawberry icing was requested.  It went a little orange with the yellow margarine. 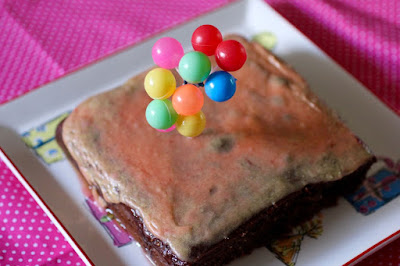 I thought some simple decoration might suffice but Sylvia decided to cover the cake with sprinkles.  And sprinkles never just go on the cake.  They go everywhere.  They are messy but they are fun too.  Just like kids.

Blend up tofu, coconut milk, dates, carrot jam and honey.  (I used a high speed blender but if you don't have one you can use a blender or food processor and make sure the dates are chopped beforehand or even just add chopped dates later.)  Stir in flours and cocoa.  Bake in lined and greased 20cm square tin or 20cm round tin at 180 for 30 to 45 minutes or until a skewer comes out clean.  Cool on a wire rack.  Icing is optional.

*NOTE: I pressed out strawberry juice of two strawberries through a sieve.  Then I mixed in about 1/2 to 1 cup of icing sugar and a large spoonful of margarine.

Cream margarine and sugars.  Beat in chickpea brine and treacle (I did the creaming and beating by hand).  Gently stir in flour, salt, bicarb of soda, ginger and cinnamon.  Fold in chocolate chips and apple pieces.  Drop heaped teaspoons onto a lined baking tray.  Bake at 180 C for about 8-10 minutes or until golden brown (a little underdone is better than a little overdone).  Cool on the baking paper on tray for about 10 to 15 minutes until they firm up a little and then remove on baking paper to a wire rack to cool completely.  Best on the date of baking or the next day.

On the Stereo:
This is Hardcore: Pulp
Posted by Johanna GGG at 23:00