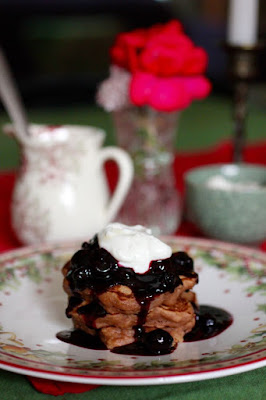 It was the morning after our Christmas in July dinner.  I was finely grating apple for pikelets for breakfast and it was taking forever.  Sylvia was so hungry she was eating the apple peel.  She was playing houses and waiting for the bus (that would be me).  I was taking so long that she made an announcement that the bus was delayed.  I think this is a sign that even the kids have noticed that the public transport system is in disarray.  And that I need to buy a better grater because I want to make lots more of these pikelets. 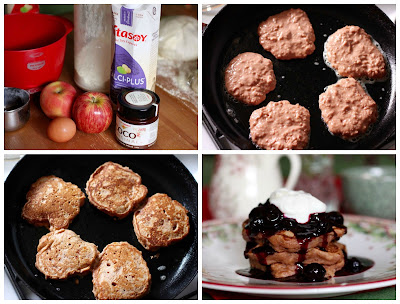 I had been after something really simple because I was still tired after our big meal the day before.  These apple pikelets seemed to fit the bill.  Then I made them complicated.  It struck me that I could add some chocolate spread and a blueberry sauce to make them perfect to send to Choclette for her We Should Cocoa event which has blueberries as the theme this month. 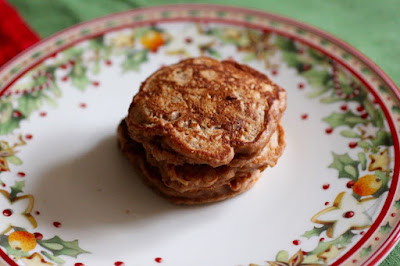 I really like Choclette's monthly event and had been thinking of what I could make to combine chocolate and blueberries.  Decadent cheesecakes and layer cakes aren't my thing.  And I have already combined these flavours in cake, scones and cake pops.  Thank goodness for pancakes and pikelets.

These pikelets were a fairly healthy sort of snack low in refined sugar.  Though I say this warily as I have been reading lately about the low sugar myth.  And despite my love of chocolate, I will probably try these pikelets without the chocolate and apple sauce some time. 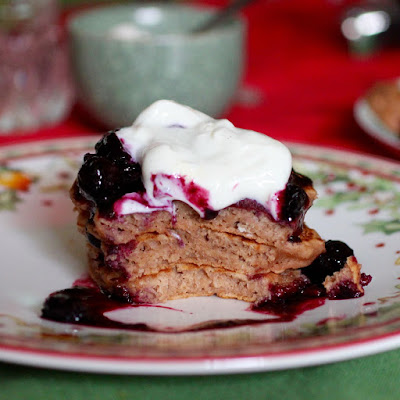 After breakfast we had a quiet day at home.  Sylvia curled up in her little 'house' in the corner of the loungeroom and found a children's baking cookbook that a friend had given her for her birthday years ago.  She now can read well enough to flick through the book and tell me all the things she wants to bake.  The apple doesn't fall far from the tree, does it!

To make the blueberry sauce, place blueberries and maple syrup in a small saucepan.  Simmer until blueberries are soft and syrupy.  Set aside to cool while you make the pikelets.

Heat a frypan over medium heat and lightly grease with butter.  Drop dessertspoons of mixture onto the frypan.  Cook for a minute or so until a few bubbles appear and the mixture dries slightly.  Flip and cook until golden brown on both sides.  (I had to flip mine more than once on the first lot of pikelets).  Continue to cook pikelets until all the mixture is used.

On the Stereo:
High Violet: The National
Posted by Johanna GGG at 14:57