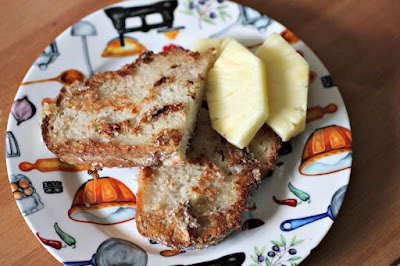 I have had a great night of comfort with a documentary on Countdown on the telly while I baked a batch of favourite chocolate tahini biscuits.  For those who didn't grow up with Countdown, it was a legendary tv music show which was where the youth found out what was going on in music back in the 1970s and 1980s.  Not to be confused with the Countdown game show in the UK.  Countdown: Do yourself a favour is such a fun show that fills me with nostalgia. 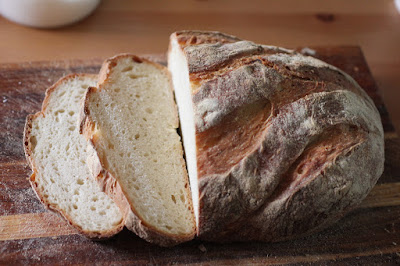 Yesterday morning we had another comfort - fried bread!  French toast to be more specific.  And if you want me to be really accurate, it was vegan French toast, which probably sounds less of a comfort to those who love their eggs.  I don't love eggs and never ate French toast as a child but have had some good experiences with the vegan variety.  I found it works quite well with homemade sourdough bread.

While we often use up an old banana in pancakes in the morning, it sometimes seems wasteful to make pancakes while we have bread that I have baked.  When Sylvia asked for French toast and we had a manky banana I decided I must be able to use up old banana and 2 day old bread.  There are few recipe ideas that I can't find someone hasn't done before.  And mostly I check out their recipe and then do my own thing.  As I did yesterday. 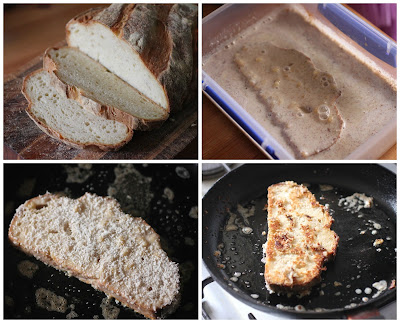 I had success with a vegan french toast last year which was coated in desiccated coconut.  We had fresh pineapple and so I said to Sylvia that we should pair it with coconut.  She must have remembered and decided we would dip the french bread in coconut before frying.  Unfortunately she is not quite up to caramelising the pineapple in the frypan so the dish wasn't quite as I would have done in an ideal world.  But we were hurrying and it was really nice with pineapple.

At least they weren't doused in cinnamon.  At one stage I gave Sylvia a half cup to measure some milk into.  She was still focussed on needing more cinnamon and seemed to think I was directing her to add half a cup of cinnamon.  Luckily I realised the communication breakdown before she added too much cinnamon into the measuring cup. 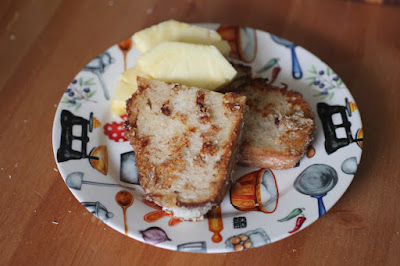 Maybe a little maple syrup drizzled over the top would have been good.  The French toast was not as sweet as I expected given there was a banana in the mixture.  I did have a little of mine with some peanut butter on it which worked.  Seems that we will now have French toast as an alternative for weekends when we have the manky banana in the fruit bowl.

I am sending this vegan french toast to Elizabeth for her No Waste Food Challenge and to Healthy Vegan Fridays #62.

Mix banana, milk, chia seeds, cinnamon and vanilla in a shallow dish.  Dip bread into mixture and sprinkle with coconut on both side (if desired).  Heat frypan over medium heat and melt about a tsp of margarine.  Fry bread for 2 to 4 minutes or until golden brown on each side.  Repeat until the mixture is finished.

On the Stereo:
Best of Bowie: David Bowie
Posted by Johanna GGG at 23:11