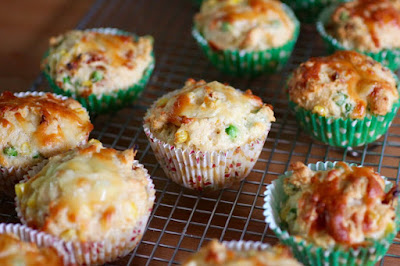 Last year I went to the school triva night.  Our table didn't do well at the trivia but I was more disappointed that we didn't have much food while tables around us were groaning under the weight of others' fancy offerings.  This year I was determined to make more of an effort with the food even if I still didn't know all the answers to the questions.  As always I had lots of great ideas and limited time. 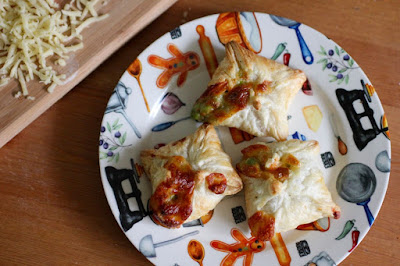 On the day before the quiz, I had some time at home to bake.  Firstly I decided to use some of the puff pastry in my freezer to make Italian purses.  Mine were slightly different as I was just using up what was in the fridge - peas mixed in some green soup (like this), marinated peppers and mozzarella cheese.  I grated up the rest of the mozzarella and it was far more than I needed.

I decided to make muffins and found a recipe for Corn Spinach and Tomato Muffins at Create Bake Make.  However I didn't have any spinach and tomatoes.  So instead I used peas and sun dried tomatoes (in oil) and used up some of the Greek yoghurt I had found too thick for my chocolate muesli at breakfast.  I only had enough mozzarella for the larger muffins which were golden brown unlike the mini ones that didn't change colour much.  They came out of the oven as I ran out the door but I felt satisfied that I had one contribution for trivia night. 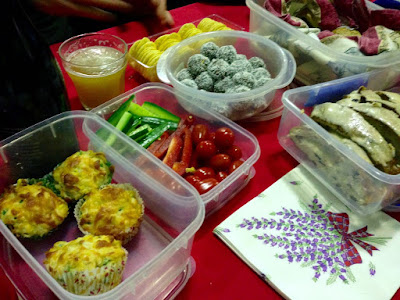 The next day was one of these crazy days when I had a friend of Sylvia's over for breakfast before taking her to gymnastics, visited another of her friends for lunch, went to the supermarket and then dropped Sylvia off for a sleepovers.  (Yes, her social life is far busier than mine).  So I abandoned my plans for fancy food like this or this and fell back on favourite recipes: sausage rolls and grubs.

Our team, called the Barnacles, ate very well.  My other team mates had already had tea but everyone bought food.  So as well as muffins, sausage rolls, vegies and grubs, we had crisps, crackers, iced fruit loaf, favourites chocolates, 99% chocolate and strawberries.  We didn't win but we came a very respectable third considering that there were 5 points between us and the winning team. 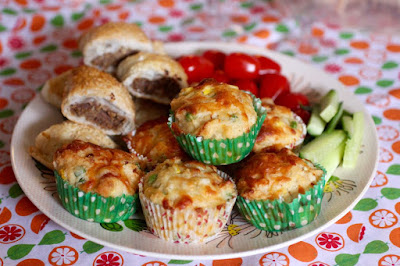 The following day we had heaps of leftovers, though the sausage rolls went very quickly because we all love them, even Sylvia.  In fact by the evening I had eaten my fill and needed salad.  But that is a dish for another day.

Place flour, peas, corn kernels, cheese, sun dried tomatoes, paprika and seasoning into a large mixing bowl.  Mix well.  Whisk the eggs, olive oil, yoghurt and milk in a small mixing bowl or large jug.  Pour the wet ingredients into the flour mixture and mix until just combined.  Spoon into greased or lined muffin tins (either regular or mini muffins work) and sprinkle with mozzarella if desired.  Bake at 190 C for 20 minutes or until a skewer inserted in the middle comes out clean.  Cool on a wire rack.  Mine lasted a few days.

On the stereo:
The Good The Bad and The Queen
Posted by Johanna GGG at 23:07