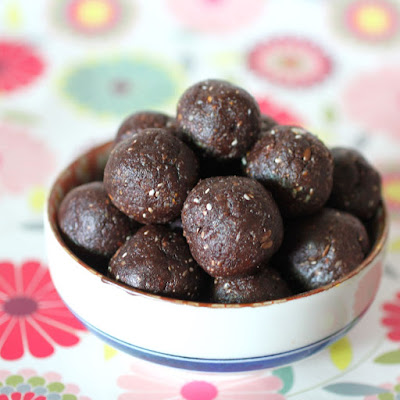 These cocoa bites were made on a day when I felt like baking but wanted quick results, I wanted chocolate but not too unhealthy, I wanted to snack but in a sensible way.  So I made these cocoa bites that are packed with good stuff.  They are the sort of snack you feel ok feeding to little girls who have just been to netball practice or having before doing a body balance class at the gym. 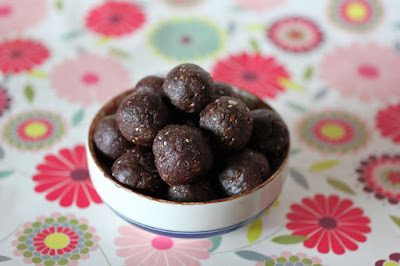 I made these in my high powered blender rather than a food processor.  They were really good but in a nut butter sort of way rather than finely chopped nuts because I think I got a little enthusiastic with the blender. So they were soft and fudgy, sweet but not overly so, and easy to take about with me.  Maybe not too different from a whole lot of energy balls I have blogged here but I think they were exactly what I needed.

I am sending these cocoa bites to Healthy Vegan Fridays #61 and Gluten Free Fridays #156.

On the stereo:
Tales of a Librarian: Tori Amos
Posted by Johanna GGG at 13:28