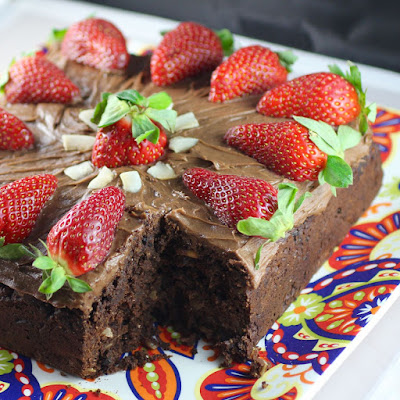 Today was a cake stall to raise funds for Sylvia's school.  We brought home baking to add to all the leftovers in the freezer.  Thank goodness Sylvia didn't bring a party bag of lollies home from the party at the zoo today.  Because I also have some of this chocolate carrot cake left in the freezer.  I had planned to make it for a special occasion but then I ended up making it when I could find time to make it.  Well almost. 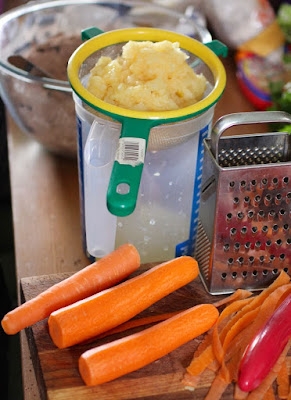 The recipe came from Lorraine at Not Quite Nigella who had made a magnificent two layer round cake frosted with nutella and cream cheese.  I wanted a simple one layer affair and when we have cakes at home, I find it easier to bake a square cake that can be cut into square chunks rather than wedges.  And I wanted to justify the purchase of a new square cake plate. 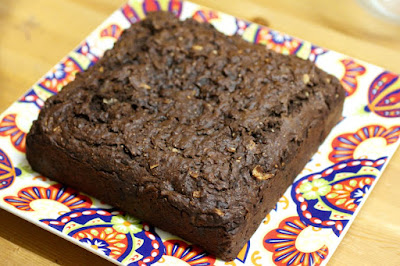 I convinced myself that if I baked it in a larger square tin, it would bake faster.  I even increased the temperature from 160 to 180 C.  However I had a tight deadline with needing to pick up Sylvia and her friend from netball.  As it was, the cake was still uncooked in the middle when I needed to leave.  I turned the oven down low and left.  It was raining hard, Sylvia was playing under a bbq in the undercover area, and I got home to find that the oven had turned itself off. 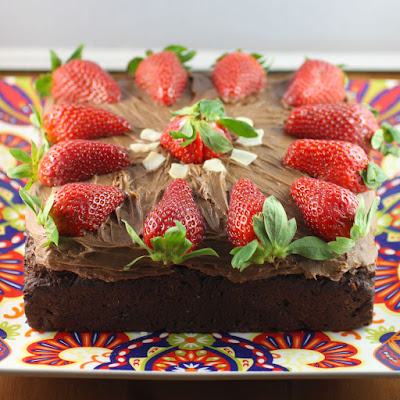 After 45 minutes at 180 C, an hour with the oven turned off and 40 minutes at 160, the cake was baked!  After that I needed a piece of chocolate cake.  I did have the patience to cool it, decorate it and photograph it (with the light box) before eating it.

The cream cheese frosting I used was a simple one based on a frosting I had made many years ago.  It is the sort you make when you want cream cheese frosting but nothing too decadent.  I also added strawberries because I had just bought some.  However I think it might have been more relevant to just sprinkle some chocolate flakes on it.  I also made a chocolate macadamia butter (sort of like this) that would be a really nice rich ganache for a special occasion, so I have included it below. 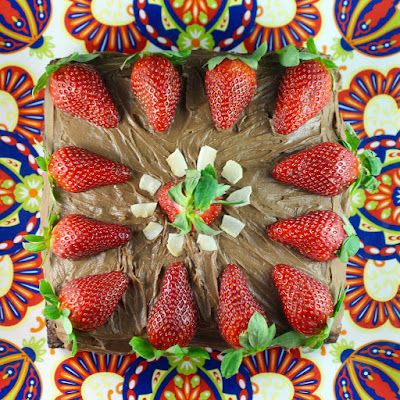 The reason I initially loved the sound of the cake was that it was nubbly.  I love texture in cake.  Lots of veggies, fruit and nuts.  Carrots, pineapple, chocolate chunks and toasted coconut.  (I had a great idea of using some carrot jam but it was beyond use.)

I used the coconut instead of nuts because Sylvia is not so keen on nuts in cakes.  Thing is, I have now discovered that she is not so keen on toasted coconut in cakes either.  E wasn't so keen either.  He guessed that there were nuts in the cake.  I really liked it.  I thought I might have the pleasure of eating it all by myself.  E managed to eat some but part of the cake has ended up in the freezer. It is such a dense cake that a little goes a long way.  I am slowly making my way through it but we have heaps of other leftovers to attend to right now.  However it is lovely to have it in the freezer for those days when nothing but chocolate cake will do.  Meanwhile I leave you with some photos from our visit to the zoo today for Sylvia's friend's party.

I am sending this cake to Choclette for We Should Cocoa.

Chocolate carrot cake
Adapted from Not Quite Nigella

Mix dry ingredients in a large mixing bowl.  Mix wet ingredients in a medium mixing bowl or a large jug.  Pour the wet mixture into the dry ingredients and mix until well combined.  Scrape into a greased and lined 20cm square cake tin (or a 20cm round cake tin).  Bake at 160 C for 1 hour and 15 minutes or until a skewer inserted comes out clean.  Cool on a wire rack.

Frost either with the cream cheese frosting (hand mix ingredients in a bowl) or the ganache (blend in high speed blender until creamy) depending on if you want it to be light or decadent!  Decorate with strawberries and/or coconut flakes.

On the stereo:
Love: The Beatles
Posted by Johanna GGG at 23:09