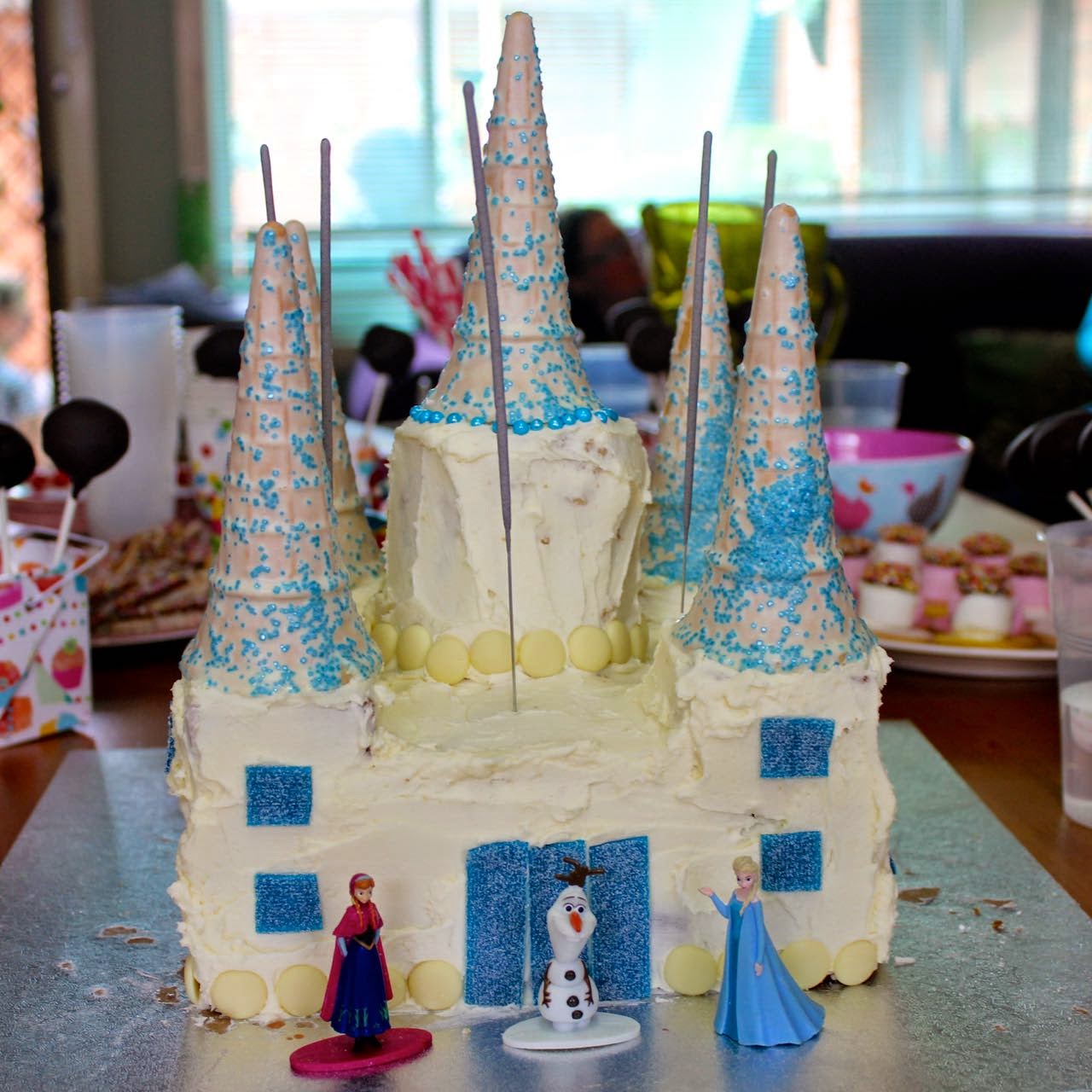 This year I made a castle birthday cake for Princess Sylvia.  As I mentioned in my post on Sylvia's birthday party, there was a tentative Frozen theme.  Apparently this was just in my head because when I told Sylvia I was doing her castle cake blue and white she was outraged because she wanted it pink and white.  Pink lollies are a lot easier to find than blue ones but by then I was too far gone in my planning.

In my defence, while looking at Pinterest birthday cake ideas with Sylvia, I had a lot of requests for fancy Frozen castle cakes.  There are some frighteningly intricate Elsa's ice castle cakes out there.  While I love making novelty birthday cakes, I prefer simple ones with buttercream than the more professional looking ones made with fondant.  The castle cake I made was from Annie Rigg's Birthday Cakes for Kids with a few changes to the decorations.

Below is a step by step guide to making the castle cake.  Here is a list of what you will need: 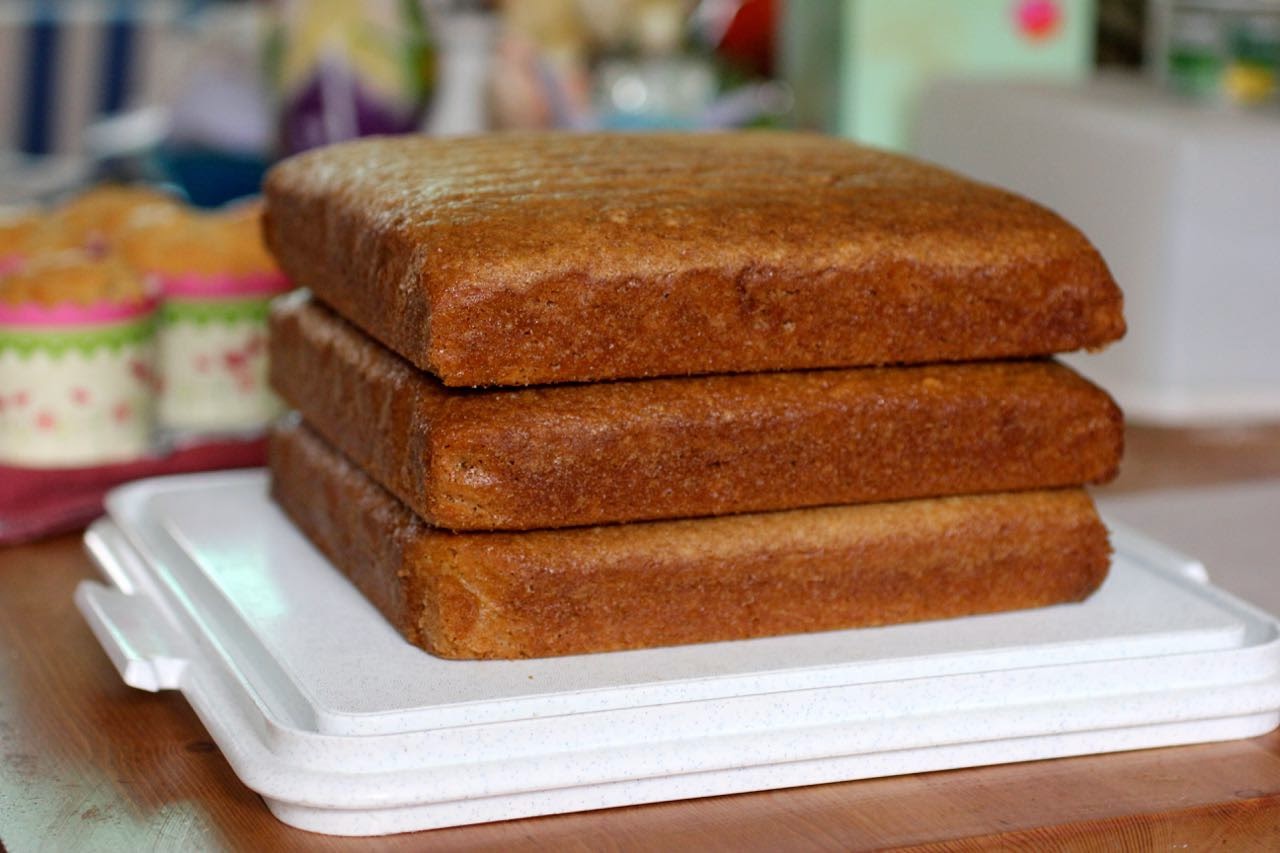 It was not a difficult cake to make but I would have benefited from more time to decorate it on Saturday morning.  The preparations started the day before when I baked three cakes.  I made three batches of this vegan vanilla sponge cake in a 20cm square cake tin.  I know it is a sturdy cake and making it the day before makes it easier to shape. 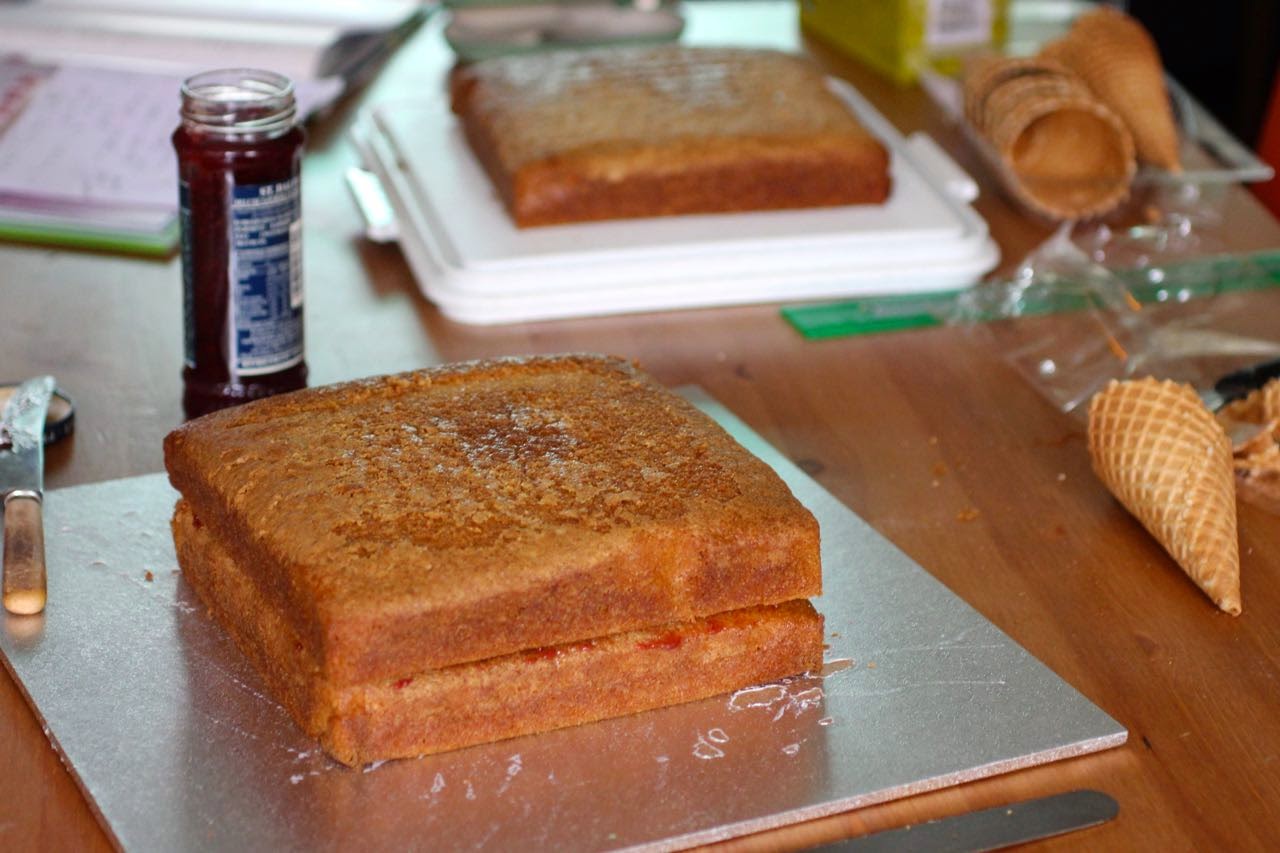 I started by sandwiching two cake layers together with raspberry jam.  Then I decided to coat the ice cream cones to give them time to dry.  That was when I found out that the fancy wafer cones had really uneven jagged edges and they could not be trimmed neatly.  I rang E who was at the supermarket to ask him to buy the other sort of ice cream cone.  He came home without them and had to head out again to buy them. 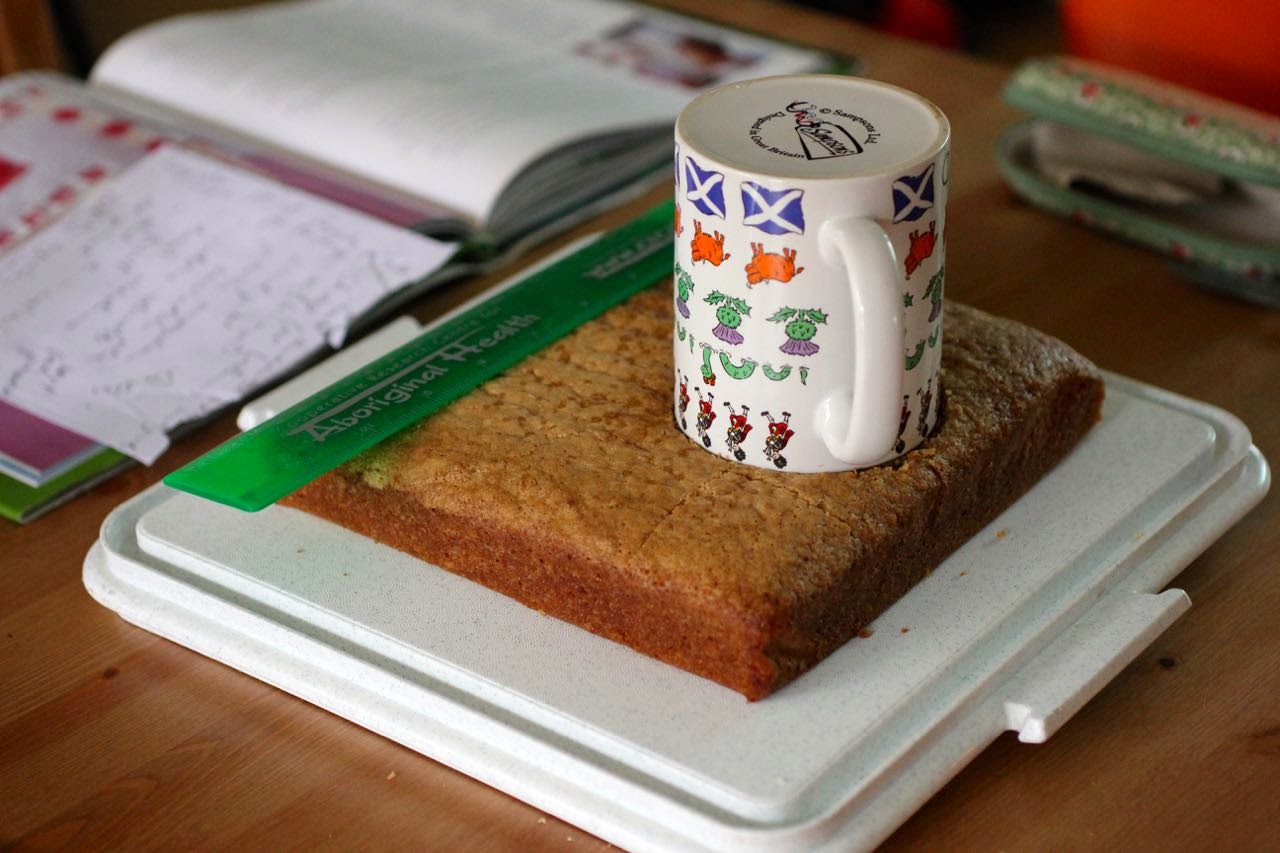 I returned to the cake.  The shaping of the cake in Annie Rigg's Birthday Cakes for Kids is a really easy style that doesn't leave too much offcuts.  I used a ruler and a coffee mug to outline the 5cm squares and 8cm circles before cutting as below. 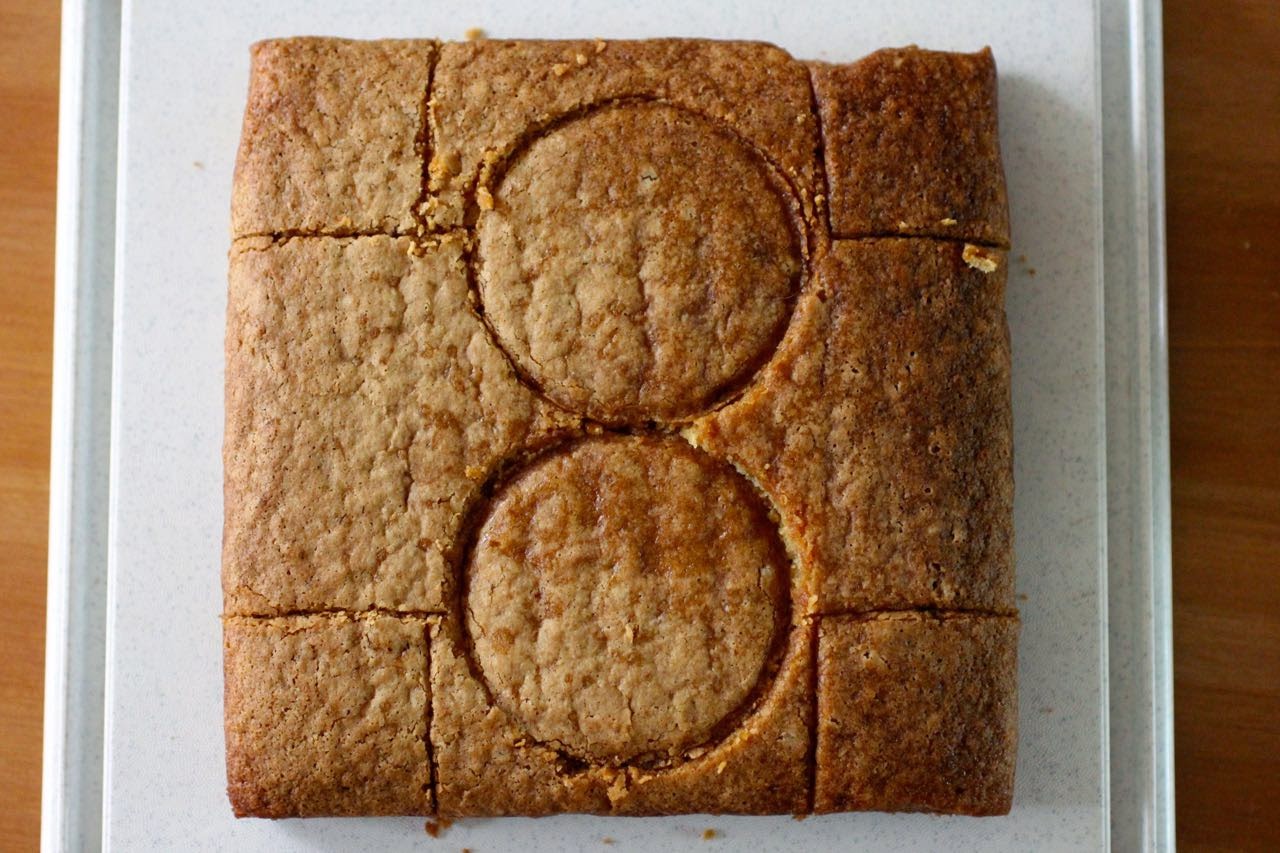 This is not the first castle cake I have made.  I made one for my niece (Maddy's) birthday in my pre-blog days.  However I have posted a photo of my first castle cake.  So much has changed since then.  I am sure Maddy helped me decorate the castle cake with lollies unlike this one.  My main lesson from that cake was to have the square towers as level as possible so the ice cream cones are straight and not wonky.  Yet this was quite a different cake! 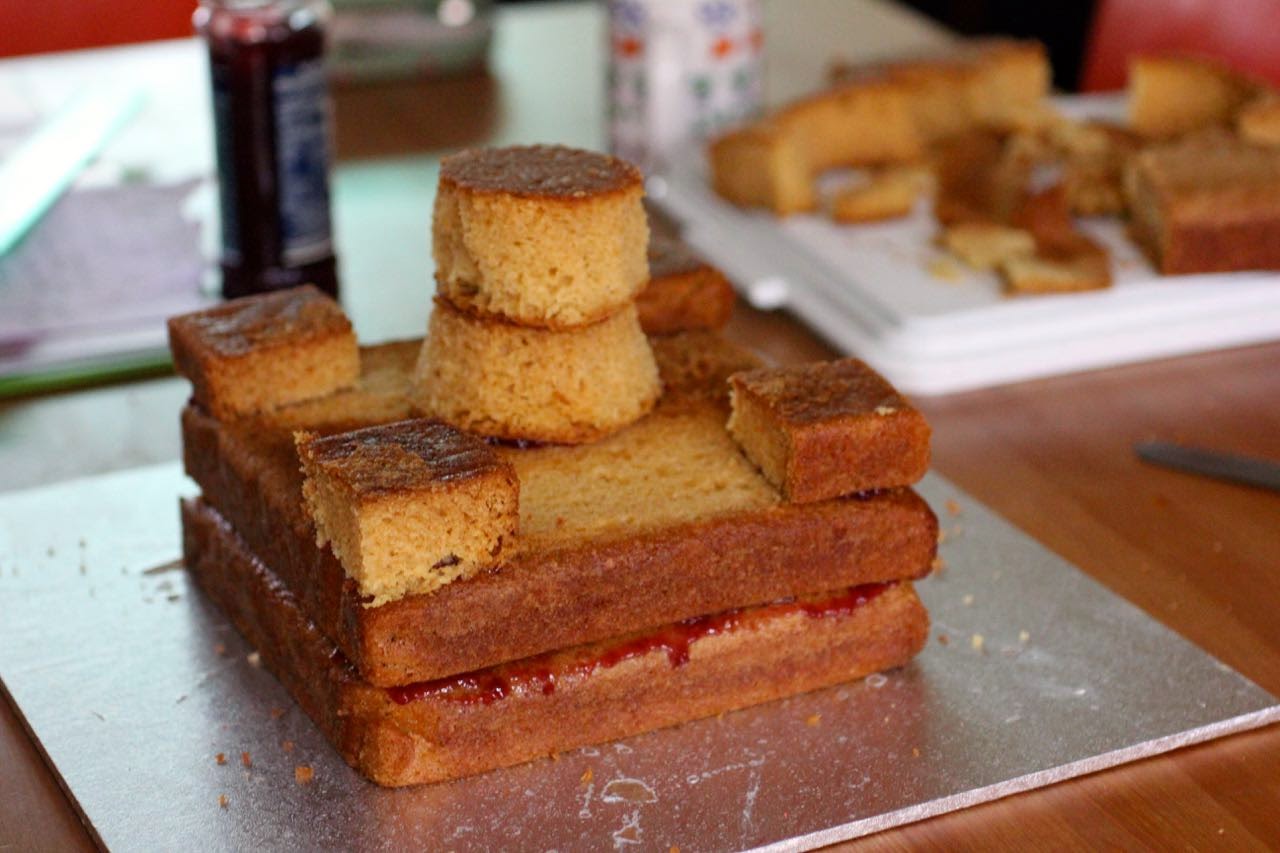 I also trimmed the top of the cake to make sure it was quite level.  Then once I had cut out the pieces I trimmed the squares to be level and placed them on each corner and stacked the two circles in the middles, using more raspberry jam to stick them down.  Once the circles were positioned, I trimmed them to look neater.  Then it was the time to brush away the crumbs from around the base and towers to make it easier to have the icing clean. 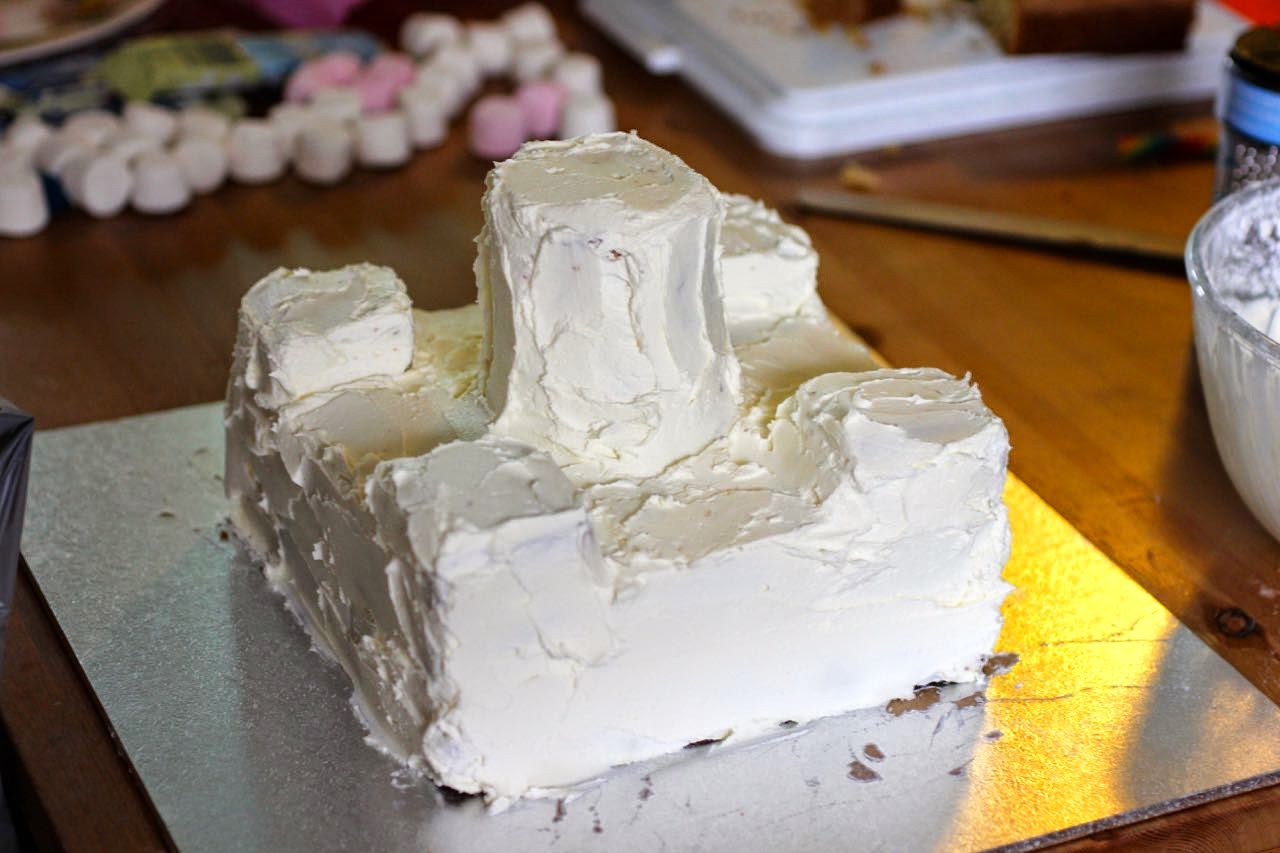 If I had had more time I would have given the cake a crumb coating like one on these cakes.  It was ok without it but took a bit of time to make sure the icing stuck around the towers and that I didn't get crumbs on the outside.  I used a buttercream frosting made by beating together 350g butter and  700g icing sugar.  There was lots of the frosting over but it was used for cupcake decorating and the tick tock teacups so at the end of the day there wasn't too much leftover. 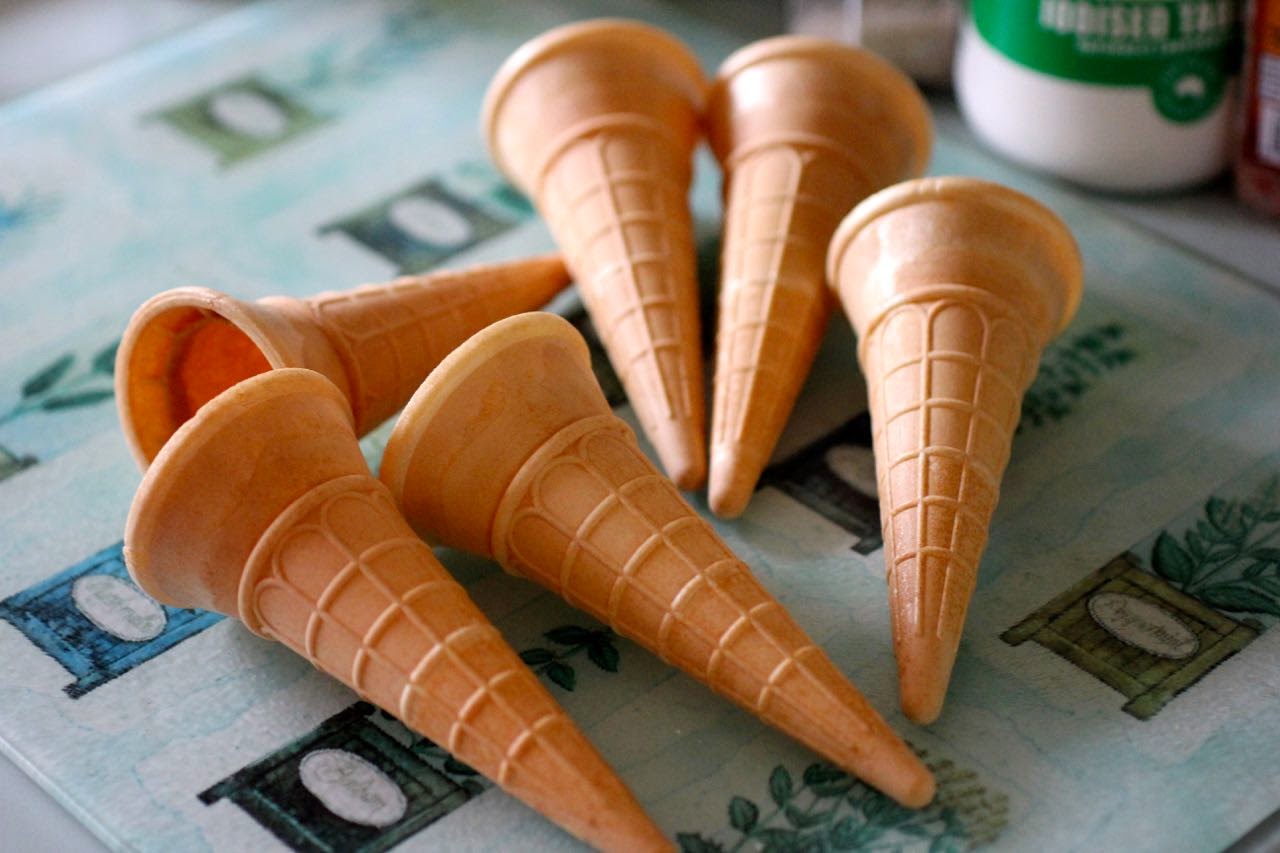 Before I started to ice the cake, E had arrived home with regular ice cream cones (above).  I melted 150g white chocolate and holding the cone above the bowl I spooned white chocolate all over the outside.  Then I sprinkled these with blue sprinkles.  It was not as easy to sprinkle them evenly as I expected.  I left them to dry on a baking tray where quite a lot of the chocolate and sprinkles pooled as they slid down the cones.

By the time I was ready to put the cone on the cake they were still wet.  It wasn't too hard to transfer them.  In fact I think if the chocolate had dried hard, it might have been harder to get them off without them sticking to the pooled chocolate at the bottom. 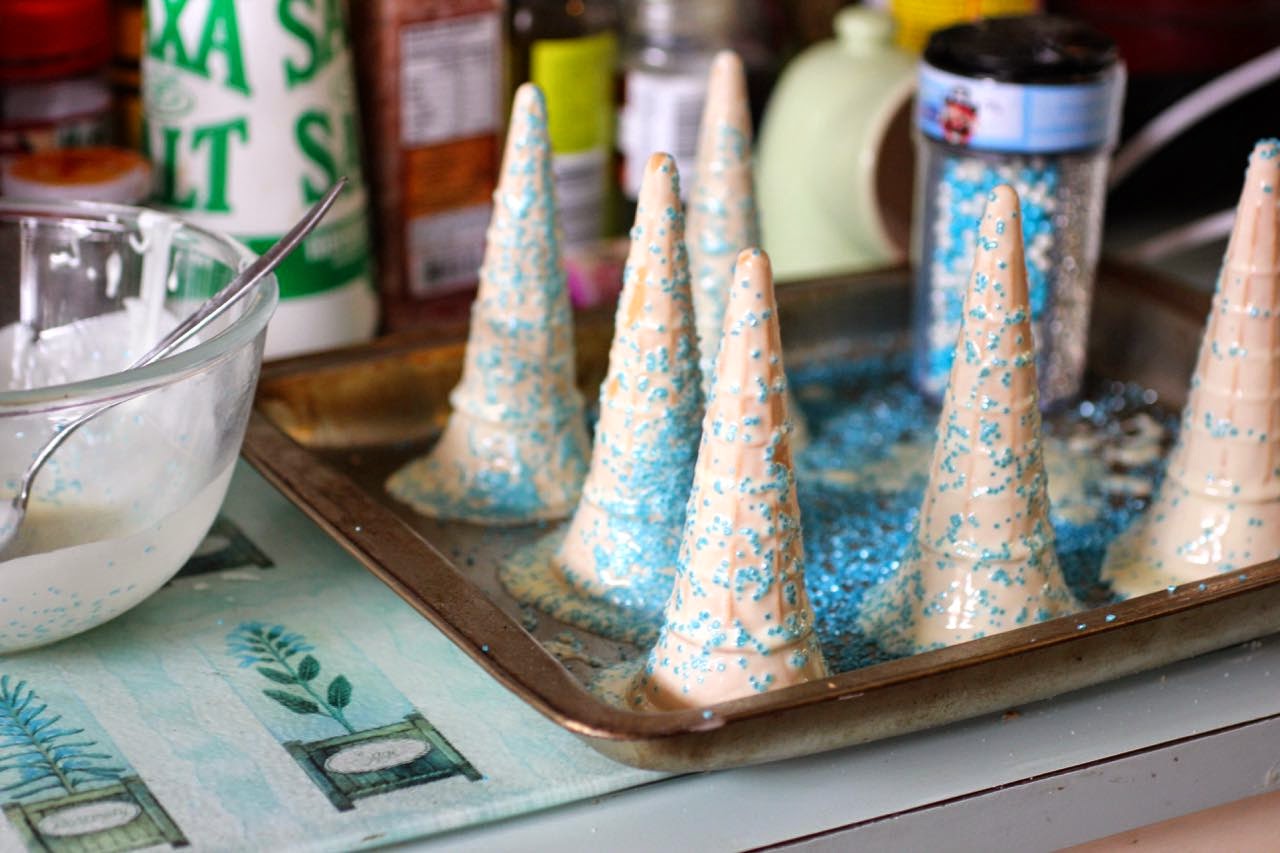 To decorate the cake I had struggled to find many blue lollies.  My piece of luck was finding a packet of blue sour straps.  They were really really sour, as some of the kids noticed but they were great to cut up for doors and windows.

While E was at the supermarket I asked him to find mini marshmallows for the lining the base because I discovered the big marshmallows were too big.  He couldn't find any but bought some white choc chips.  I only had time to line the base of top cone with blue cachous.  If I had time I would have lined the base of each cone this way and perhaps the doors and windows. 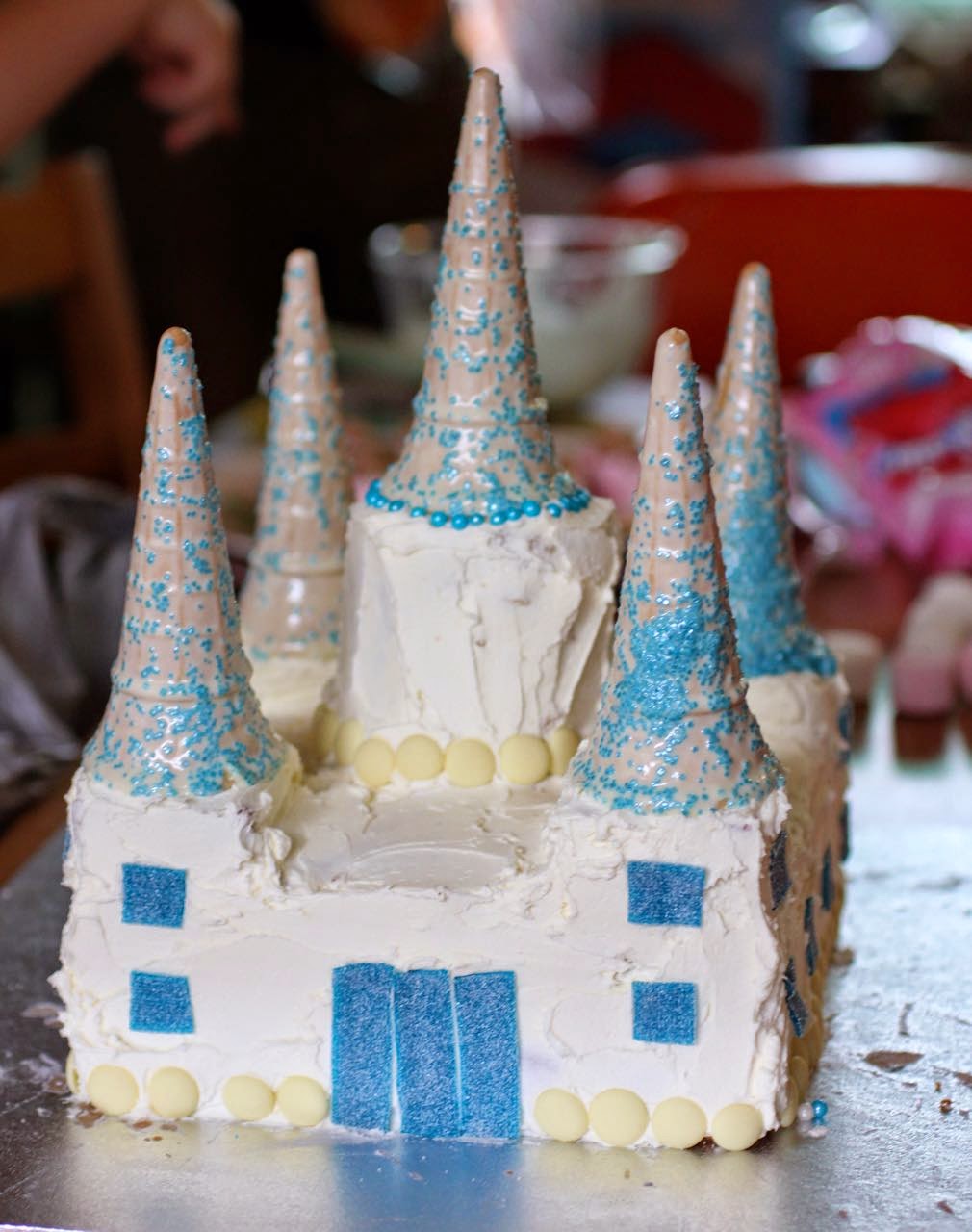 Considering that I ran out of time, I was really pleased with the cake.  It was more elegant and less gaudy then many of my cakes.  Sadly I also ran out of time to do anything more than snap a few quick pics.  We put sparklers on the cake rather than candles but, as I have commented earlier, we should have lit them and then put them on the cake!  We live and learn.  I also put some little Frozen figures at the front that were in a game we gave Sylvia for her birthday. 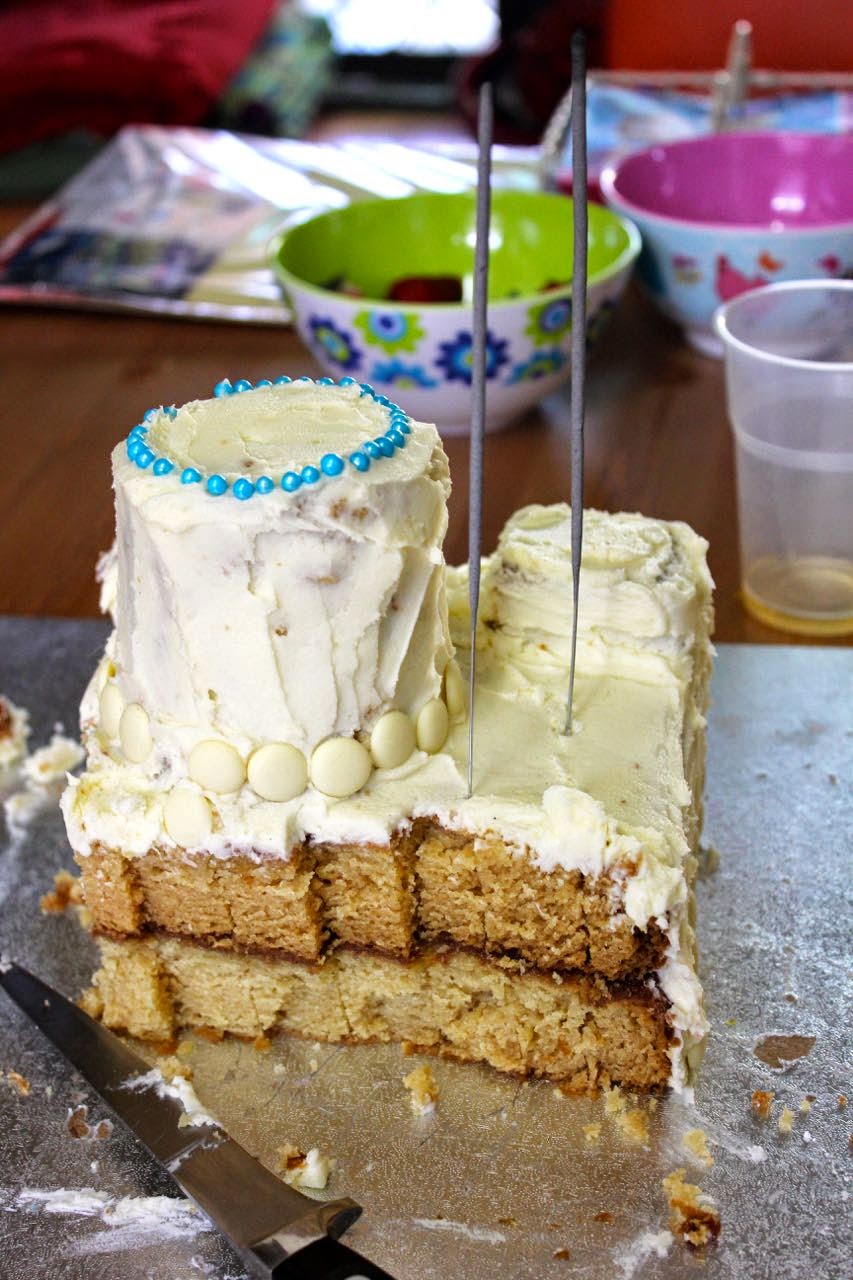 The little girls really loved the cake.  Apart from the smoking sparklers sending off one little girl into a coughing fit, the other problem I didn't foresee was the 8 little girls all wanting one of the 5 cones on the turrets.  I probably could have made a few extra for them but it worked out alright.  Before we knew it the cake was a shadow of its former self and stuffed into the freezer where it is still to be found when we fancy a little something sweet.

I am sending this cake to Jibber Jabber who runs the Love Cake blog challenge.  This month the theme is In the Book, and as this cake was modelled on a cake from the Annie Rigg book.