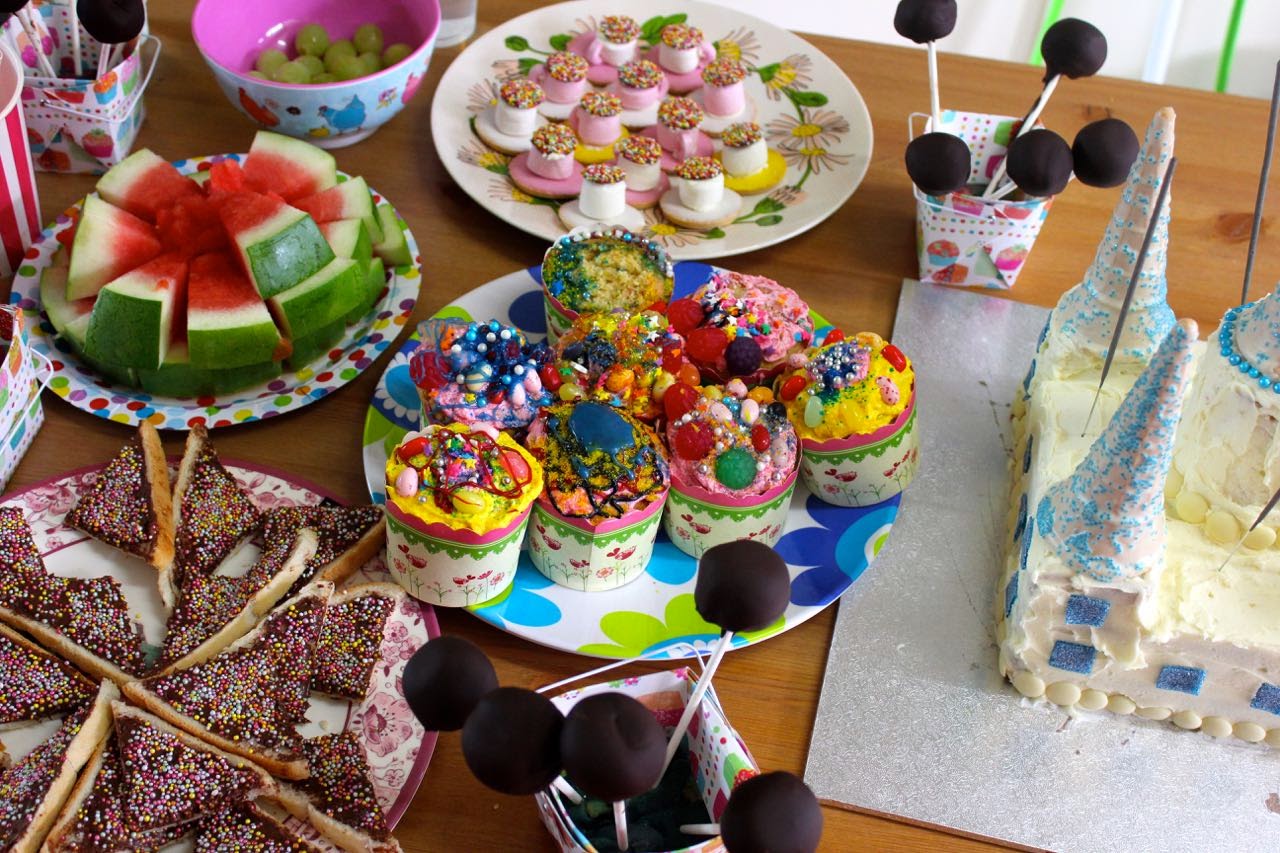 This birthday was the first year that Sylvia asked for a separate party for her friends and her family.  I think she just wanted two parties!  It was a lot more work but the eight kids at the party (including Sylvia) had fun.  I was too busy running around to take many photos during the party but took a few  before and after. 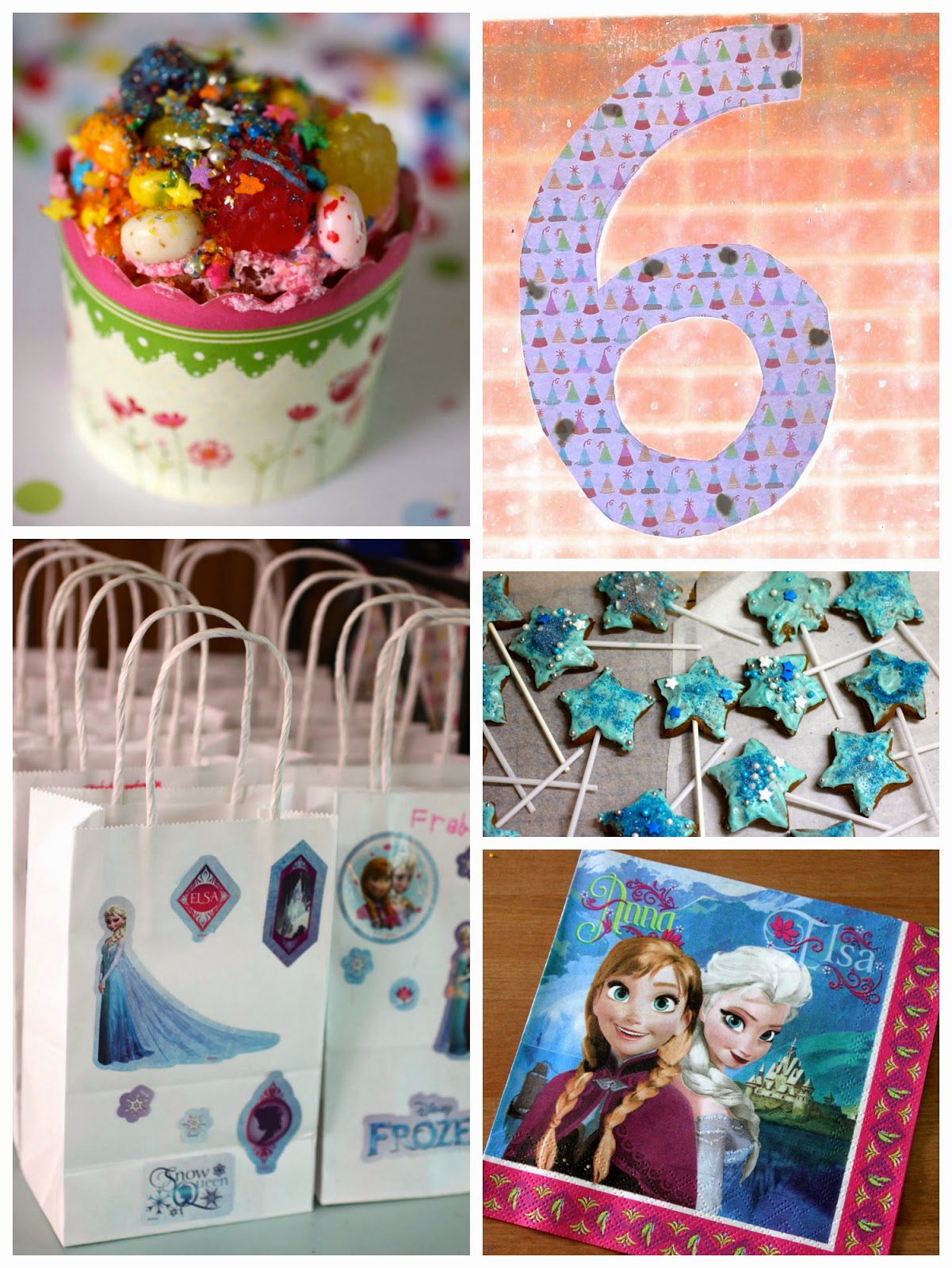 The week prior to the party was busy with planning.  Sylvia and I have conversations on what she wanted.  At one stage there were plans for a blue and white Frozen theme until she realised that cheezels were neither blue nor white.  We did incorporate some Frozen into the party anyway. 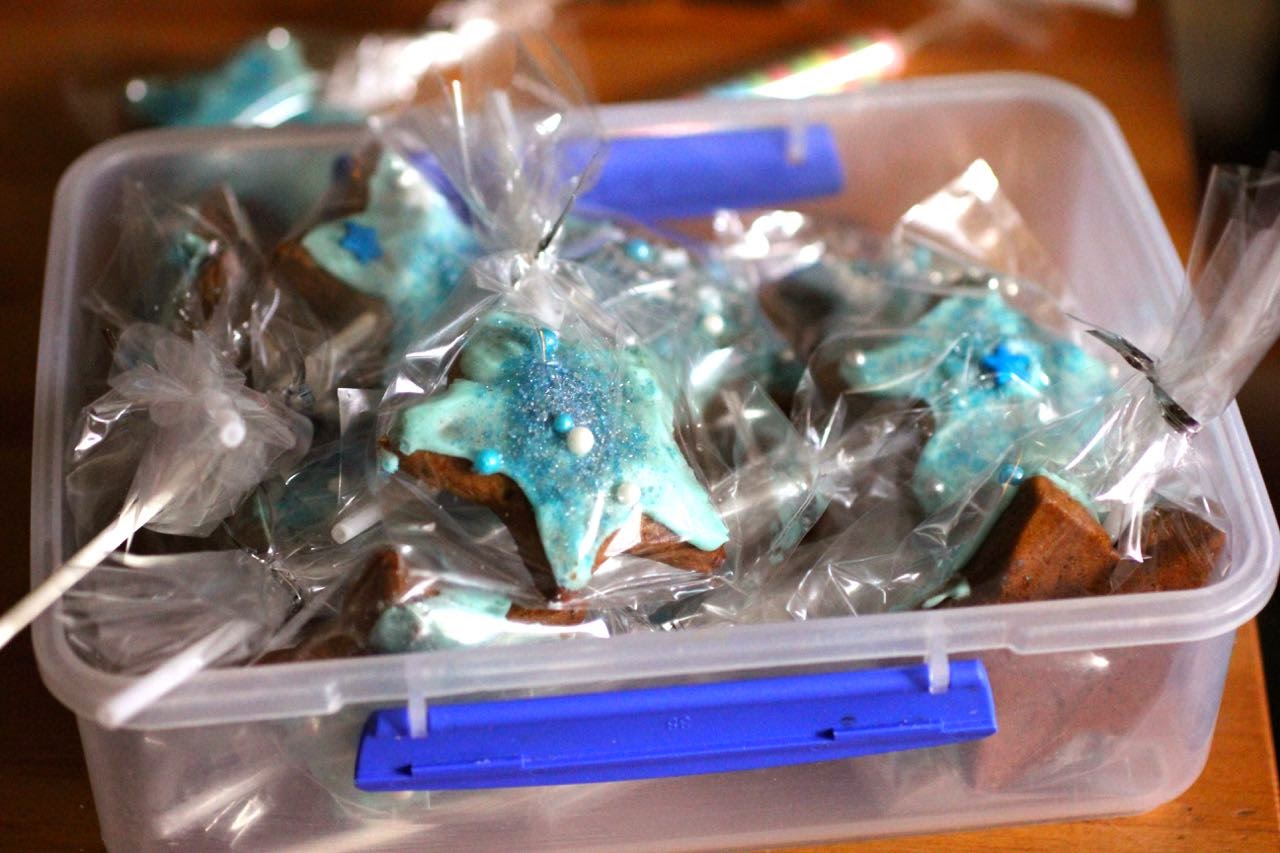 We had a few games up our sleeves in case we needed but never used such as Simon Says, Sly Fox, Hokey Pokey and Musical Statues.  I really liked some other activities I have seen such as the kids putting their names and picture on a paper cup to use for drinks, decorating your own party bag or decorating a crown. 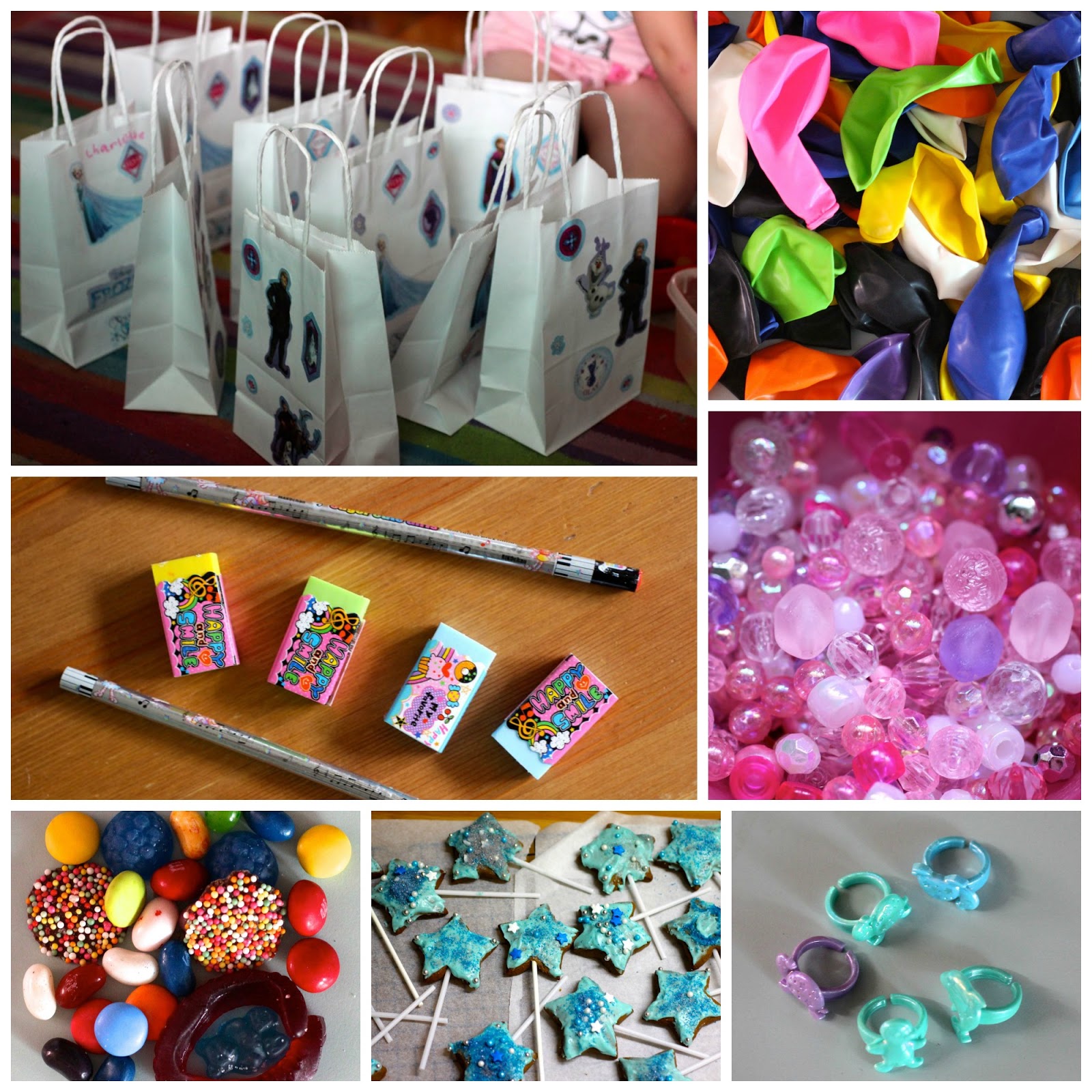 Sylvia has spent the last year planning the party bags.  They loom huge for her when planning parties.  Party bags are more difficult for parents.  I have had a few playground chats about whether we can get away without any at a party.  It is the idea that kids are entitled to a bag of lollies at the end of the party that bothers us.

I have had quite a few discussions with Sylvia about party bags being a way of saying thank you at the end of the party.  To reinforce this and get away from just lollies, she helped me make little gifts for her friends.  We bought plain white bags and decorated them with some Frozen stickers.  We also bought pink beads and made necklaces.  Sylvia also helped to decorate the gingerbread wands.  (I made them gingerbread as I am very familiar with the recipe and know it keeps well.)

The contents of each party bag was: 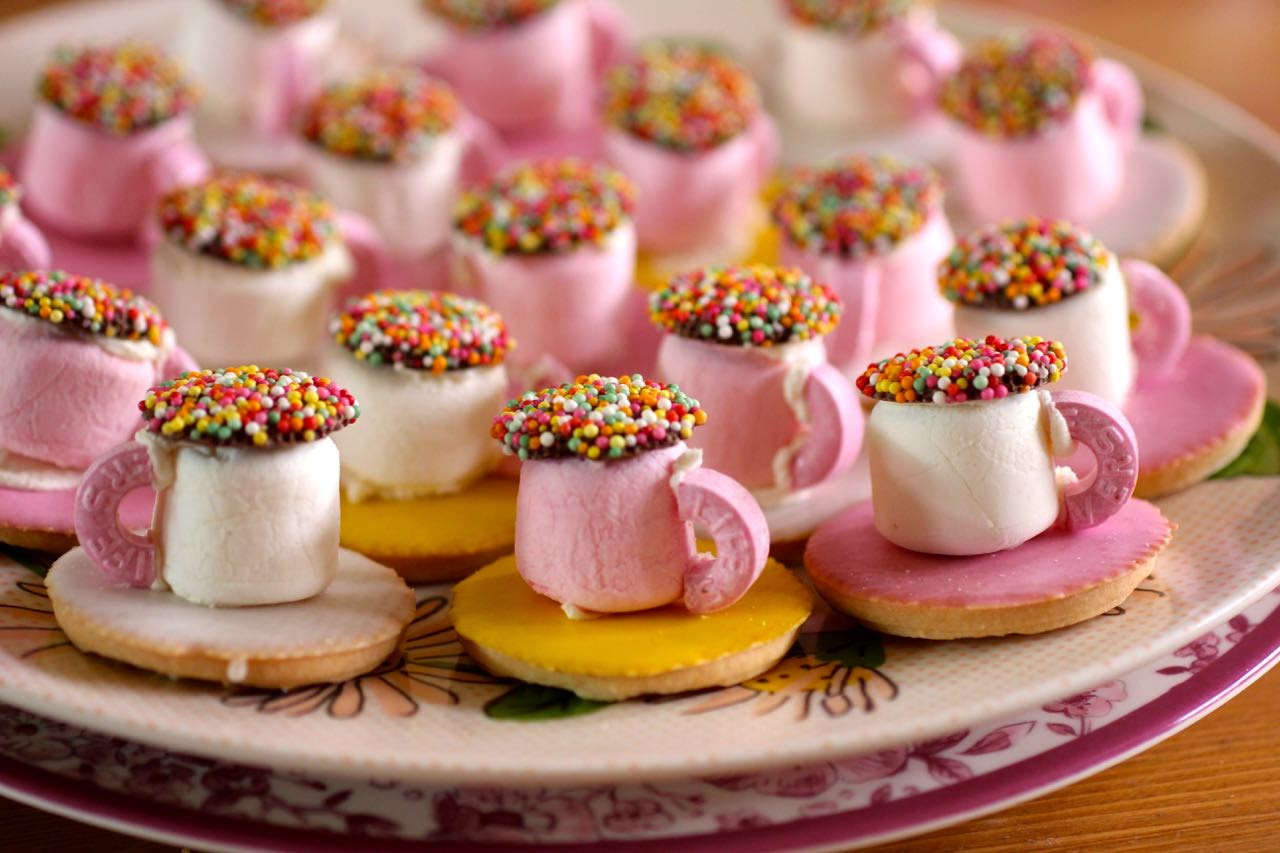 On the morning of the party I was very grateful to Sylvia's friend's parents for taking her to gymnastics while I decorated the cake and E shopped and cleaned.  When Sylvia returned I was still doing the cake so with minimal guidance she made most of the tick tock teacups.  My sister Susie used to make these for parties until she was diagnosed as celiac.  They are just a matter of using a little icing to glue together tick tock biscuits, marshmallows, freckles and half a lifesaver for the handle.  Aren't they cute? 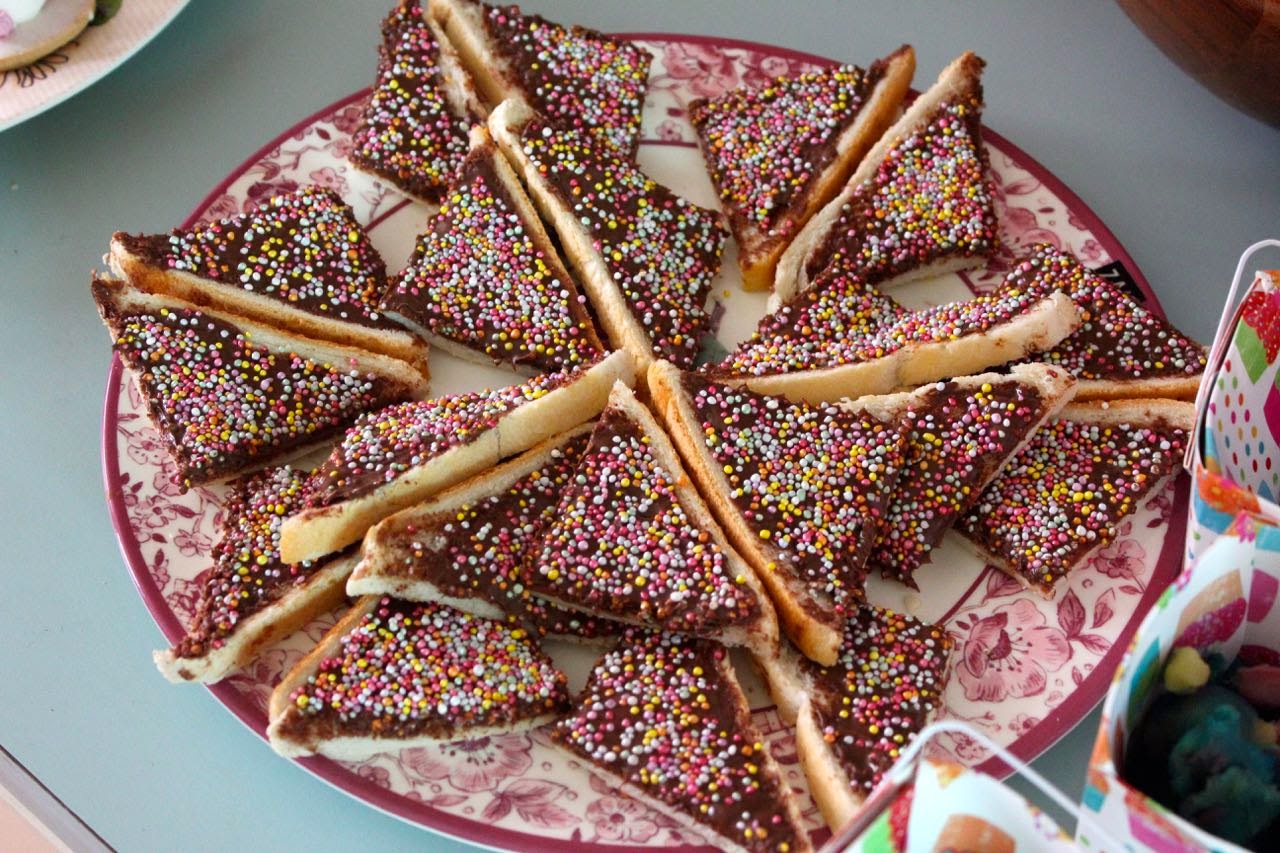 Syliva's gym friend then arrived early and her mum and grandmother were a godsend in helping with chopping up food and making the nutella fairy bread.  (Specially arranged in Frozen fractals.)  I found this idea online and probably made a whoop of joy when I saw it.  Sylvia is not keen on butter so I thought nutella would substitute perfectly.  It tasted really good.  There was so much food (despite my big sister's warning) that a lot of it was leftover.  Later I thought how good the leftovers would have been in a bread pudding but at the time I just wanted to tidy up. 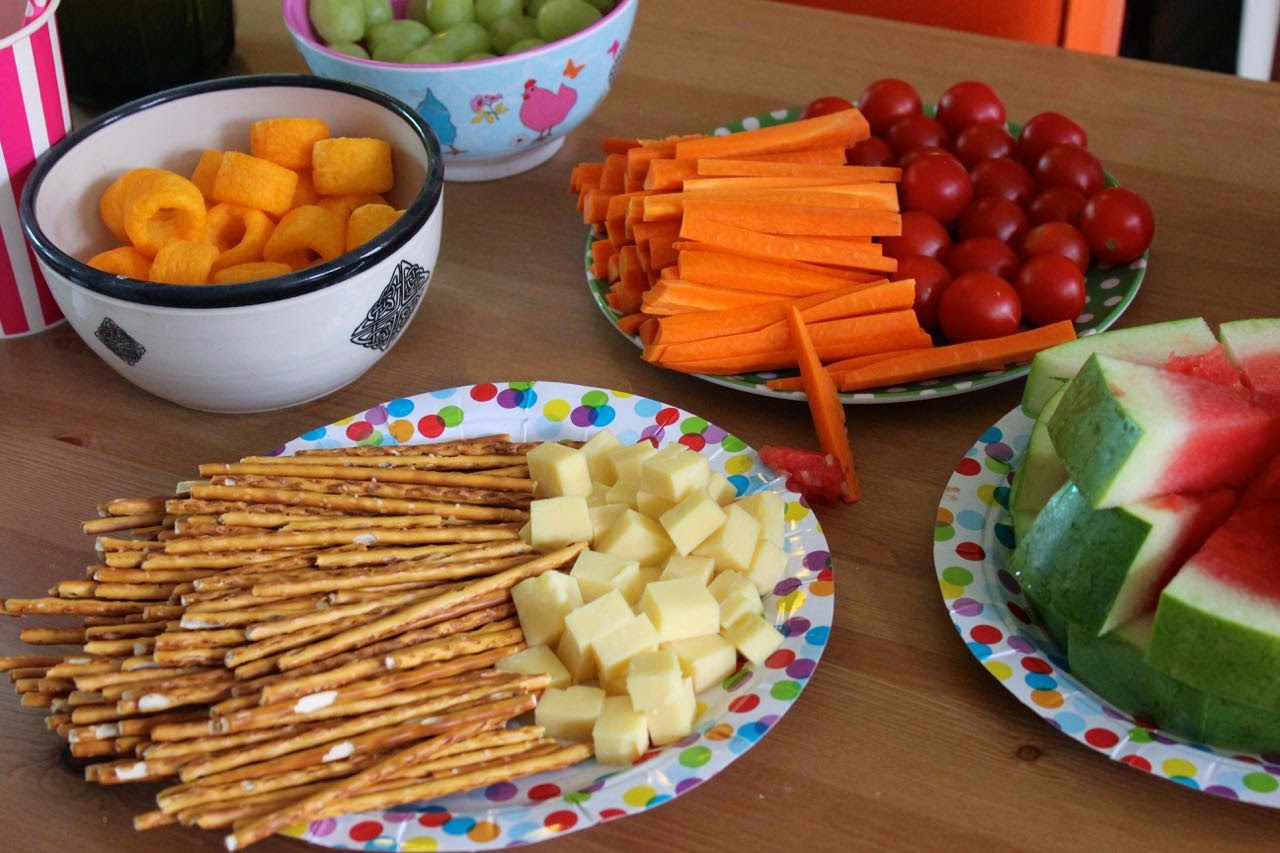 When the kids arrived we had savoury food to nibble.  I assumed they had eaten lunch but I wanted some nibbles.  Mostly we kept this healthy with carrot sticks, cherry tomatoes, pretzels, cheese and cheezels.  The kids took a little snack pack of these on a serviette when they arrived.  We had heaps left but it was good to have some more healthy leftovers at dinner time when we were too tired to think about making a meal.

As well as food to nibble, we had some colouring in set up in a corner.  This was useful especially for shy kids who needed some time to feel comfortable.  It also meant that kids had something to do when they came in before we started on the activities.  We then did the cake decorating that was a great hit.  More about that in another post. 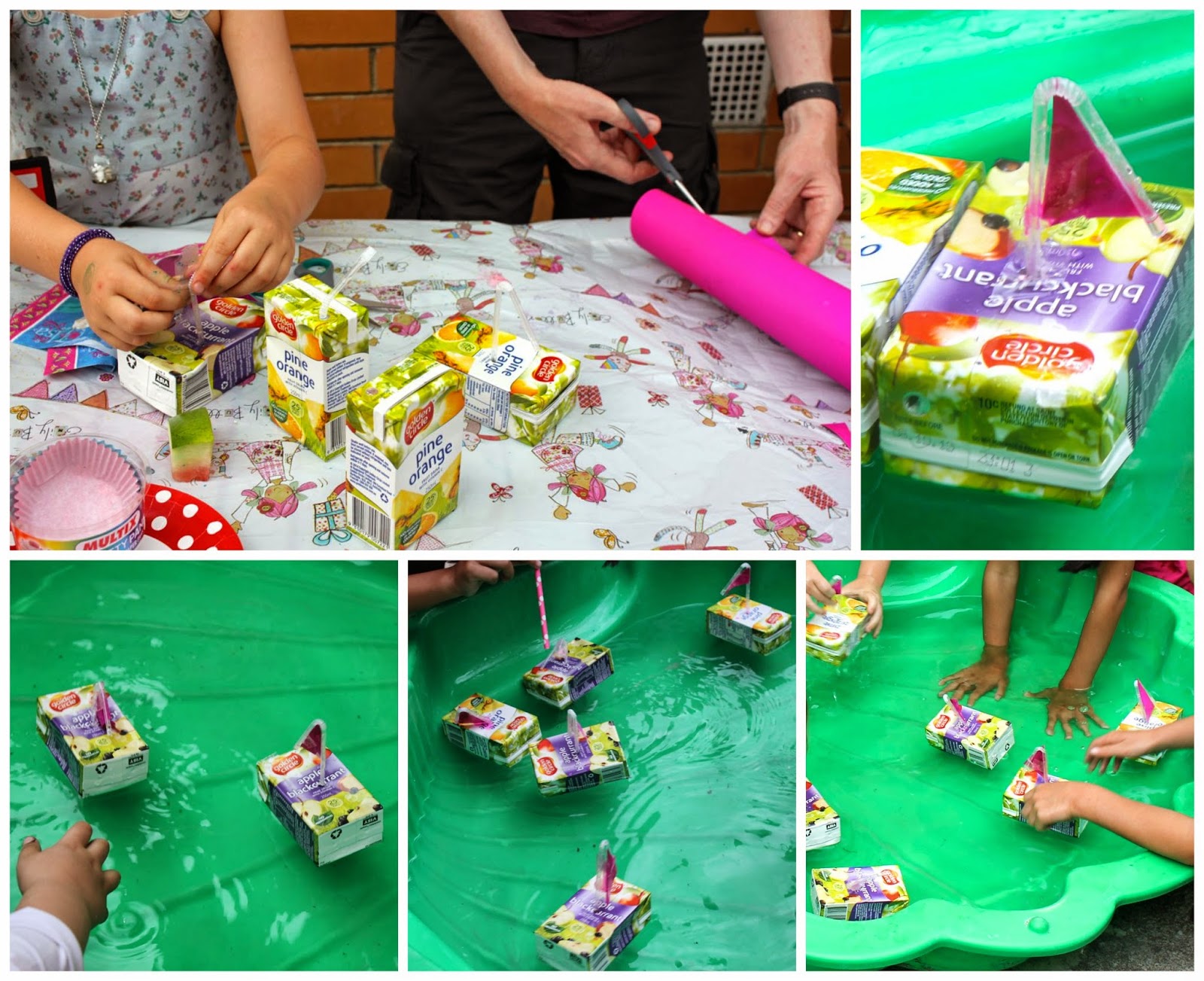 Trying to anticipate the weather was hard as the forecast went up and down.  When I was worried it would be hot I looked for water activities to cool the kids.  I decided to make boats and found directions for juice carton boats.  These were really simple.  We took juice cartons, taped up the how where the straw goes, stickytaped a cardboard sail in the crook of the straw and poke the straw into the side so they could float on their backs.

A few weeks before the party, Sylvia had a few friends around and they all jumped on the lid of the sandpit.  It was so old it collapsed.  Which meant we cleared the sand out of the bottom to use as a pool.  When my dad arrived and asked if he could help I asked him to clear out the rest of the sand (I had made a start) and fill the wading pool with water. 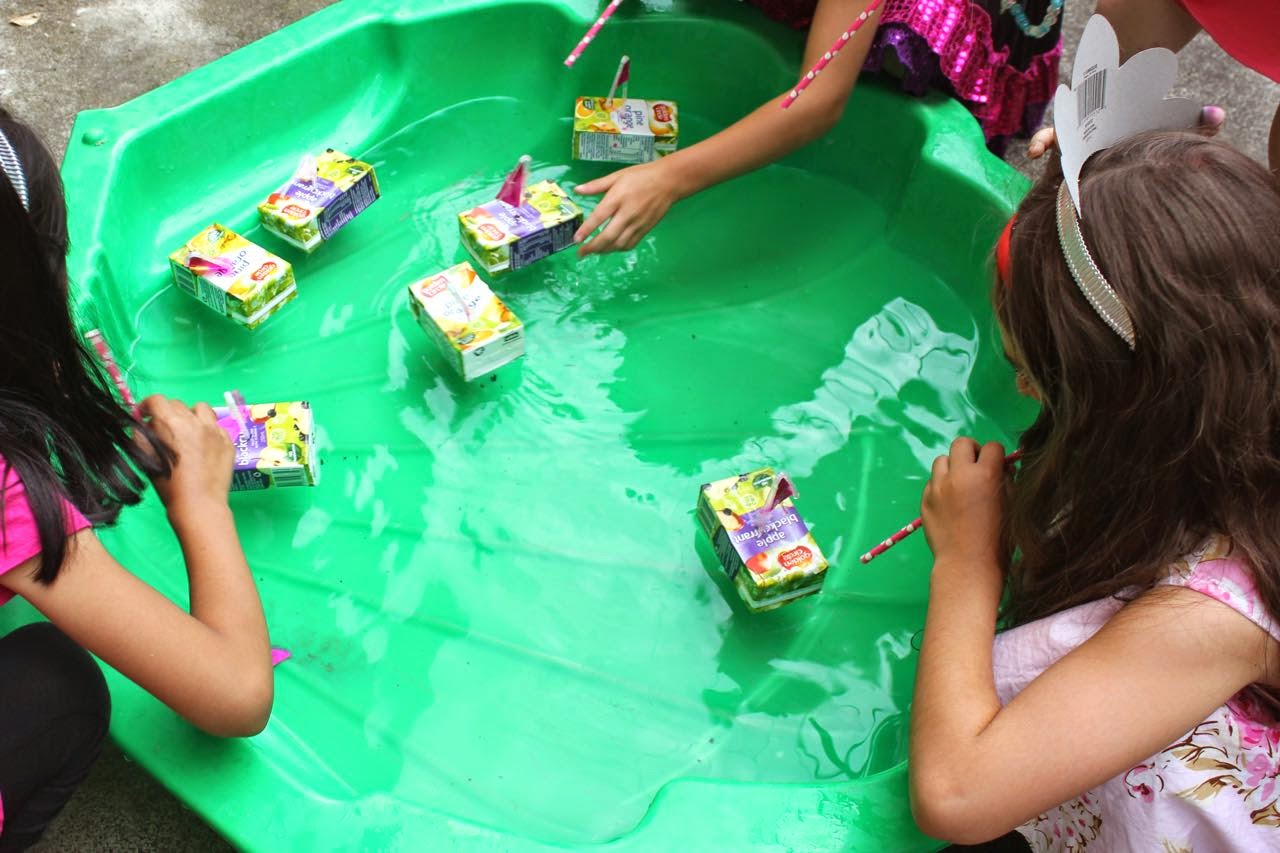 The juice carton boats were a great success.  They were so quick to make that kids didn't get bored, though they did need a little help.  It was a bit tough for some kids to drink the juice in time to do their boat, especially a couple of latecomers.  (Perhaps we could have poured them into paper cups.)  In retrospect I would have got them to make a picture or initial on each sail so they knew whose was whose.  But kids make their own fun.  They found drinking straws inside to make waves to blow the boats about.  Inevitably the shoes came off and the kids had to climb into the pool.

After this we sent them out the front to play scarecrow tiggy because they needed to run around.  Next was pass the parcel.  Another party issue these days is whether there is a present every time the parcel stops or just at the end.

Sylvia really wanted everyone to have a present.  I refused to use lollies so I told her she could if she chose presents from her tiny and little things that kick around the house.  This mostly worked (other than one present that Sylvia grumpily remarked wasn't meant to be in there) and made me feel better when kids just left them around the house as they left.  As kids are wont to do! 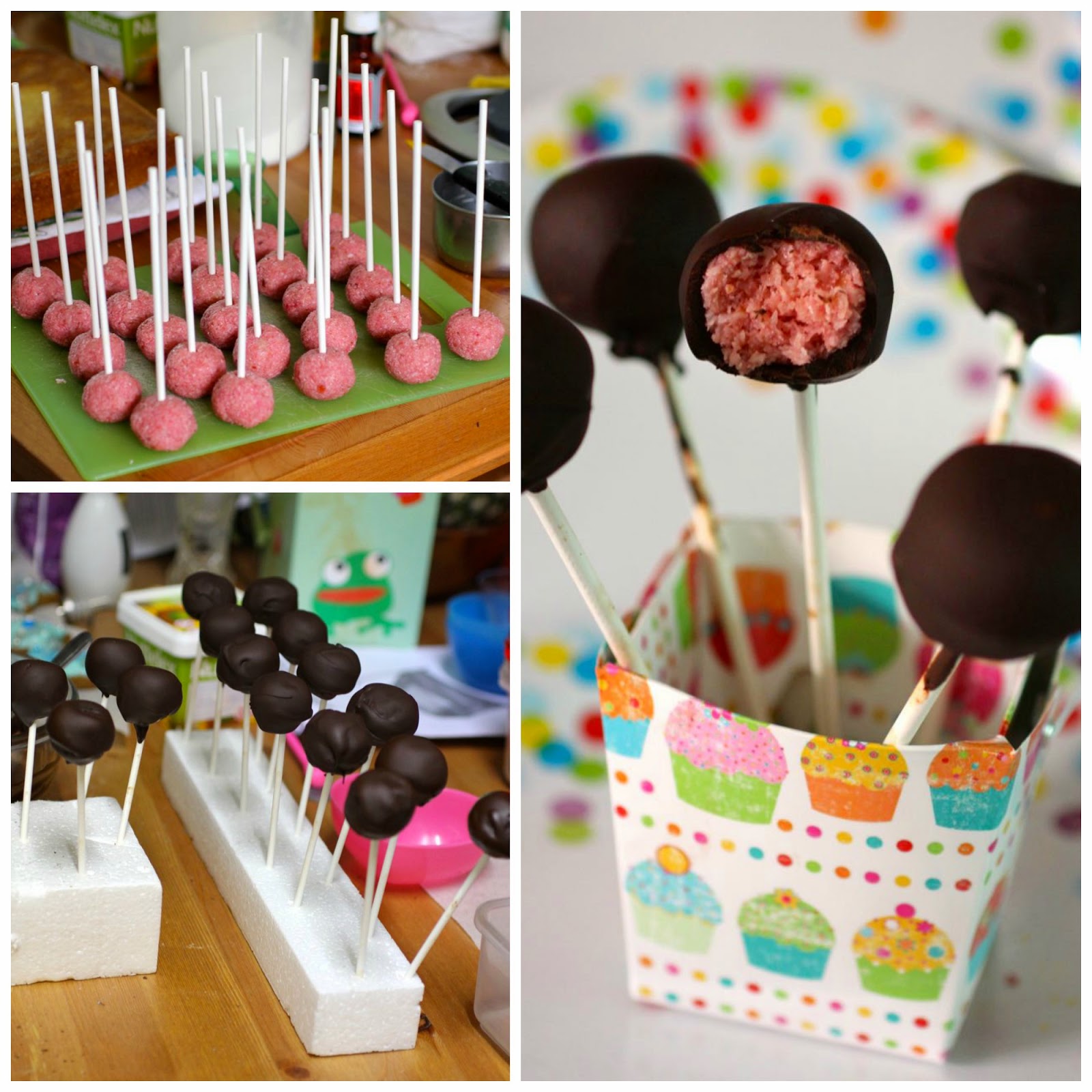 By then I was keen to bring out the sweet food.  It was time to do the birthday cake and give the kids time to eat cake and play before they went home.  I will write up a separate post on the Castle Birthday Cake.  You can see a sneak preview of it in the top photo.  Sylvia is not keen on blowing out candles in front of a big group so we had sparklers instead.  Which would have worked if we had lit them on a candle and placed them on a cake.  Trying to light them with matches resulted in a lot of smoke and a little girl having a coughting fit!

For sweet food we had birthday cake, cherry ripe pops, nutella fairy bread, tick tock teacups, decorated cupcakes, watermelon and grapes.  Sylvia requested the cherry ripe pops.  I have made them a few times before and she loves them.  They are easy to make as long as there is room in the freezer.  I am sure that the glace cherries weren't as red as the ones I have used previously so I added a little food colouring.  I am repeating the recipe below as I have used different quantities than last time I blogged about them. 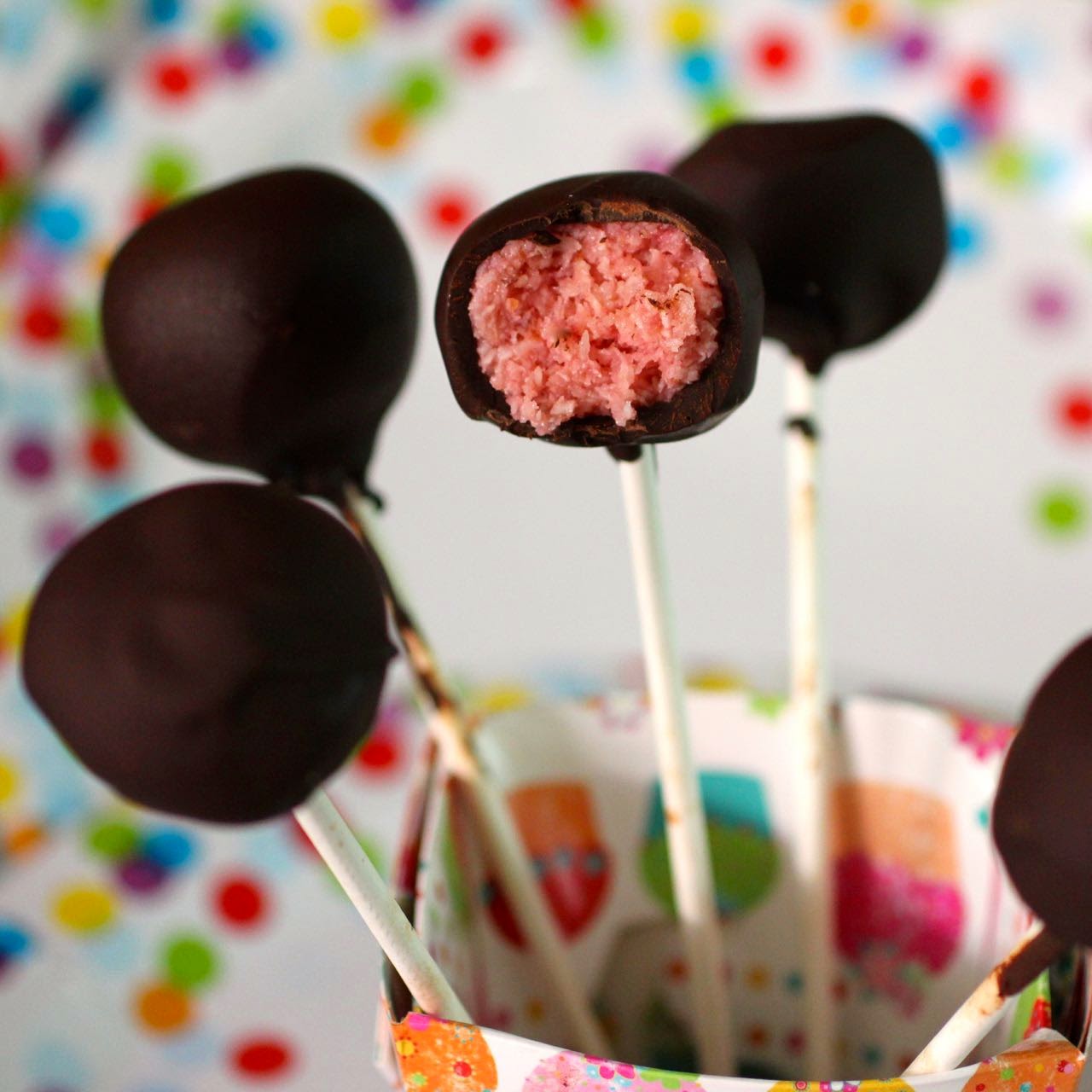 I found some party boxes we have had kicking around the kitchen and filled them with old playdough.  A few cherry ripe pops were "planted" in each box.  It was a good way to present them as this is always a challenge.  The kids loved them.

Then it was time to hand out party bags and say goodbye.  The kids took their decorated cupcakes home.  I had thought they would eat them at the party but if I had anticipated this I might have given the gingerbread wands in the party bag a miss.  As it was we had heaps of food over.  There is still cake in the freezer and I have finally baked the other half of the gingerbread dough that sat in the fridge a while.

Overall the party was a success but very tiring.  Next year I am thinking perhaps an outing to the zoo or the park might be good! 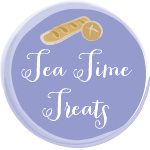 I am sending the tick tock teacups to Janie at Hedgecombers who is hosting Tea Time Treats in March.  The theme is biscuits and cookies.  I hope she will accept my somewhat lateral take on the theme.

Blend coconut, condensed milk and glace cherries in the food processor and blend.  Add a few drops of red or pink food colouring if desired.

Stick a lollypop or icy pole stick in each ball.  Place board or plate of balls in the freezer to chill for about 1 1/2 to 3 hours should do it.

When ready to dip the balls, arrange some styrofoam or playdough or somewhere else for the pops to stand.  Heat about half the chocolate in a small bowl in the microwave until mostly melted and stir well to melt.  Then take out about a dozen balls at a time and dip in the chocolate until completely covered (use a spoon if necessary to pour chocolate over them).  Let any chocolate drips fall off them and then stand upright in styrofoam or playdough or whatever you are using.  They will set quickly.  Melt more chocolate when you run out and keep taking them out in batches to dip.  Wash your hands if you get chocolate on them or the sticks get smudged.

Keep cake pops in the fridge in a covered plastic tub.  They are best served straight from the fridge.

On the Stereo:
Sing a Song of Sixpence: 45 stories, songs and nursery rhymes
Posted by Johanna GGG at 22:41