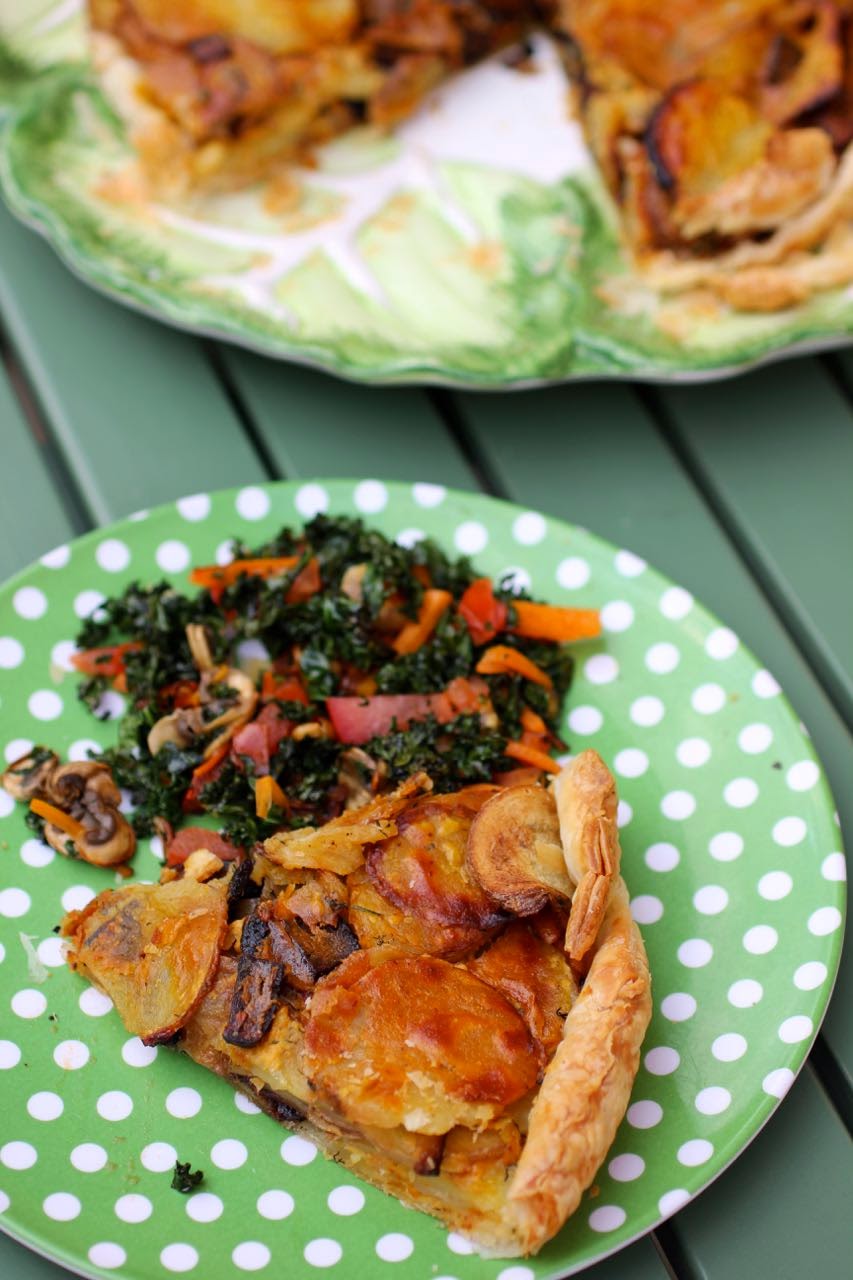 Happy St Patrick's Day.  It has been quite low-key here this year.  No banner making, profusion of green food and stories like last year!  (Where has that energy gone?)  Rather than focus on green this year, I was determined to use some of the sack of potatoes in the cupboard.  I made pie.  And I do have a few green moments to share once dinner is done! 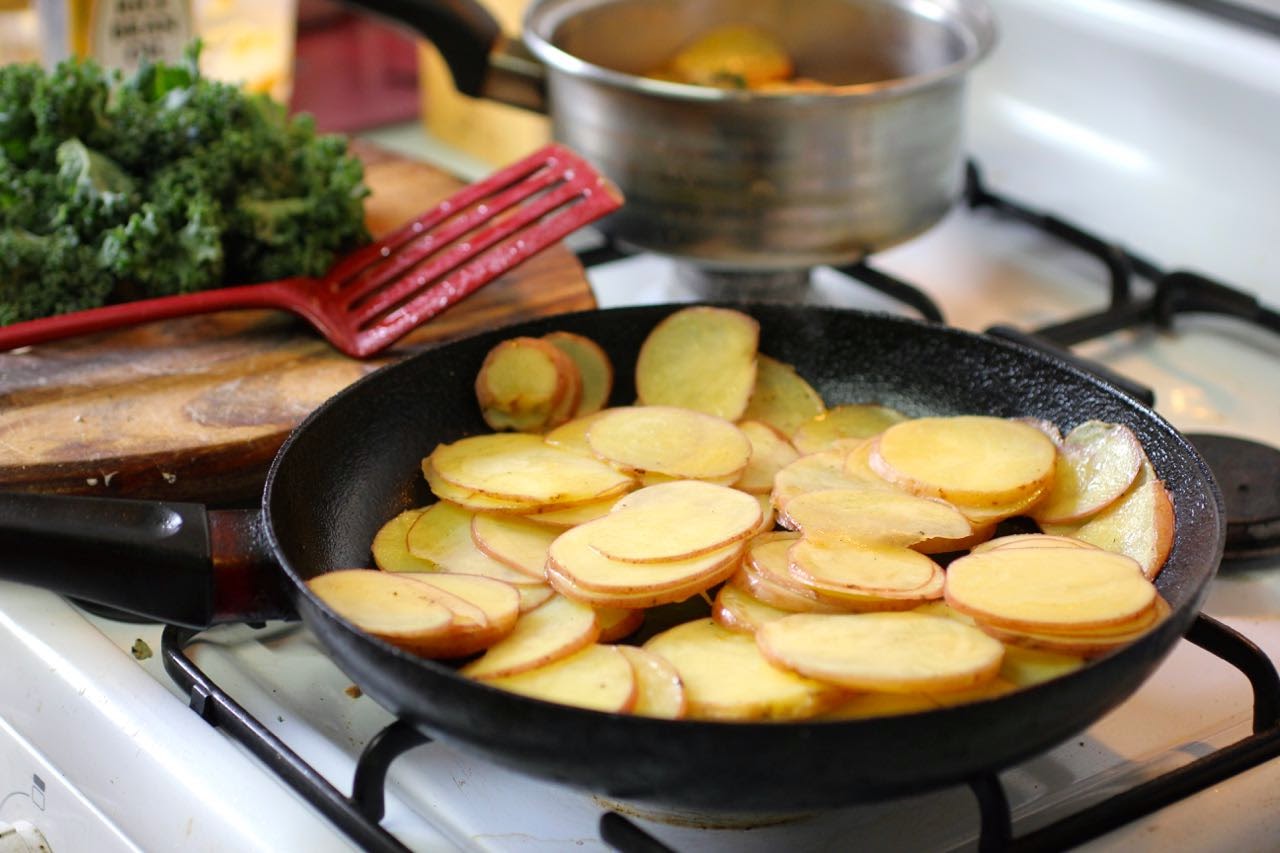 It was only today that I finally had a little time to think about what to make for St Patrick's Day.  I recently started a St Patrick's Day Pinterest Board.  Most friends did not seem to even notice it is St Patrick's Day, though I did run into one who was wearing a "Kiss Me I'm Irish" badge and my brother is playing a St Patrick's Day gig tonight so there are still a few of us around who love that day!  But it is always heartwarming to see lots of celebrations in the blogosphere! 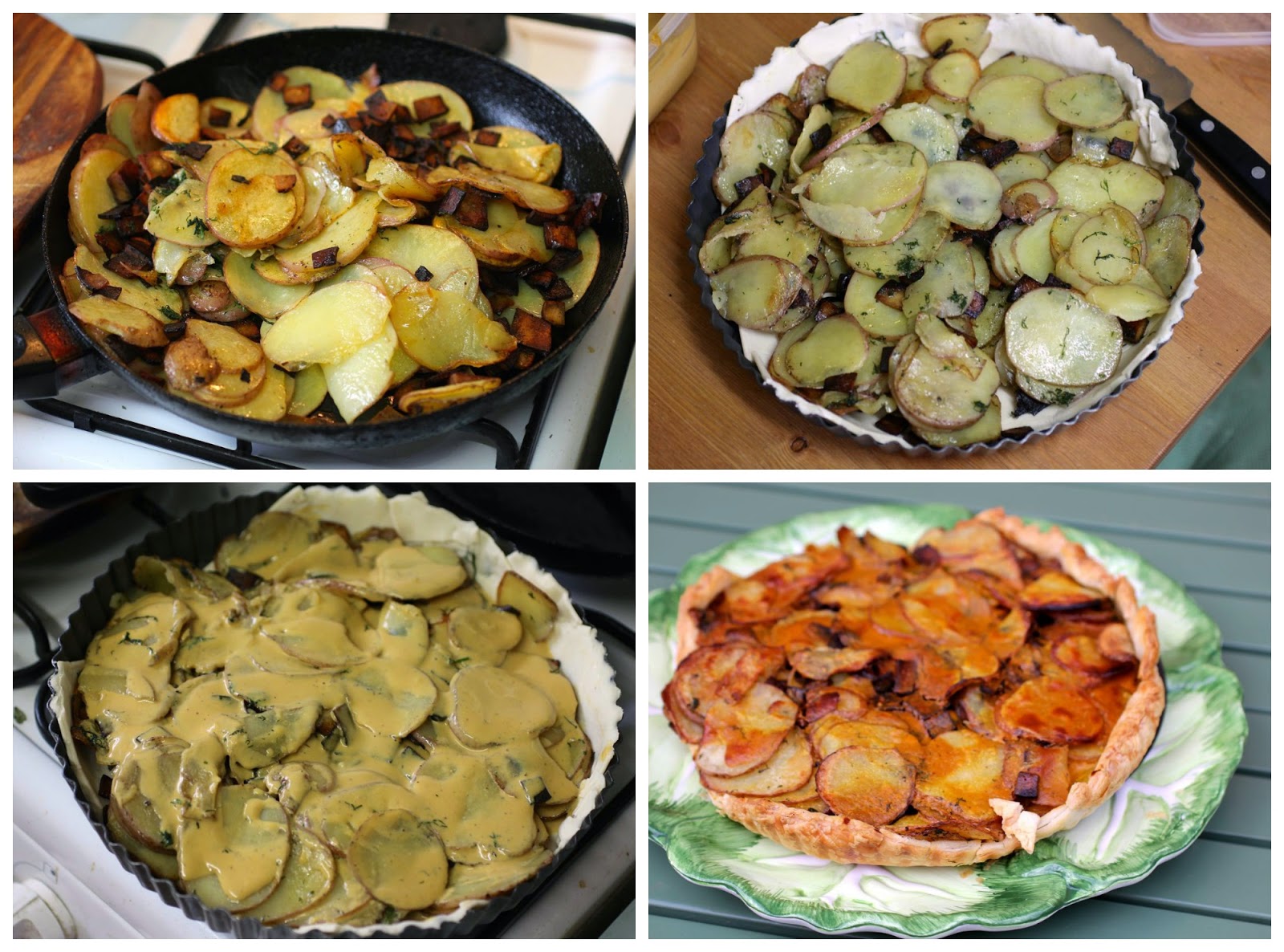 Hence dinner is a good time to remember St Patrick's Day.  I found a potato pie recipe that used bacon and cream.  I veganised it with tofu bacon (or facon) and vegan alfredo sauce that were already in the fridge as well as a solo sheet of puff pastry lingering in the freezer.  Using these leftovers helped hurry it along but slicing and frying potatoes still took a while.  And then I forgot to fry up onions and scatter parsley over the cooked pie.

Sylvia loved my forgetfulness.  She even had a second helping of the pie.  What child doesn't love pastry, potato and tofu bacon!  Oh that's right, I am just talking about my own child tonight!  I don't claim that other children will love it because I can't even claim that Sylvia would love it on another night.  E and I also loved the pie.  E added a little chilli jam but I was happy to eat it with some vegies on the side.  It wasn't as pretty as the pie in the original recipe but it was very tasty. 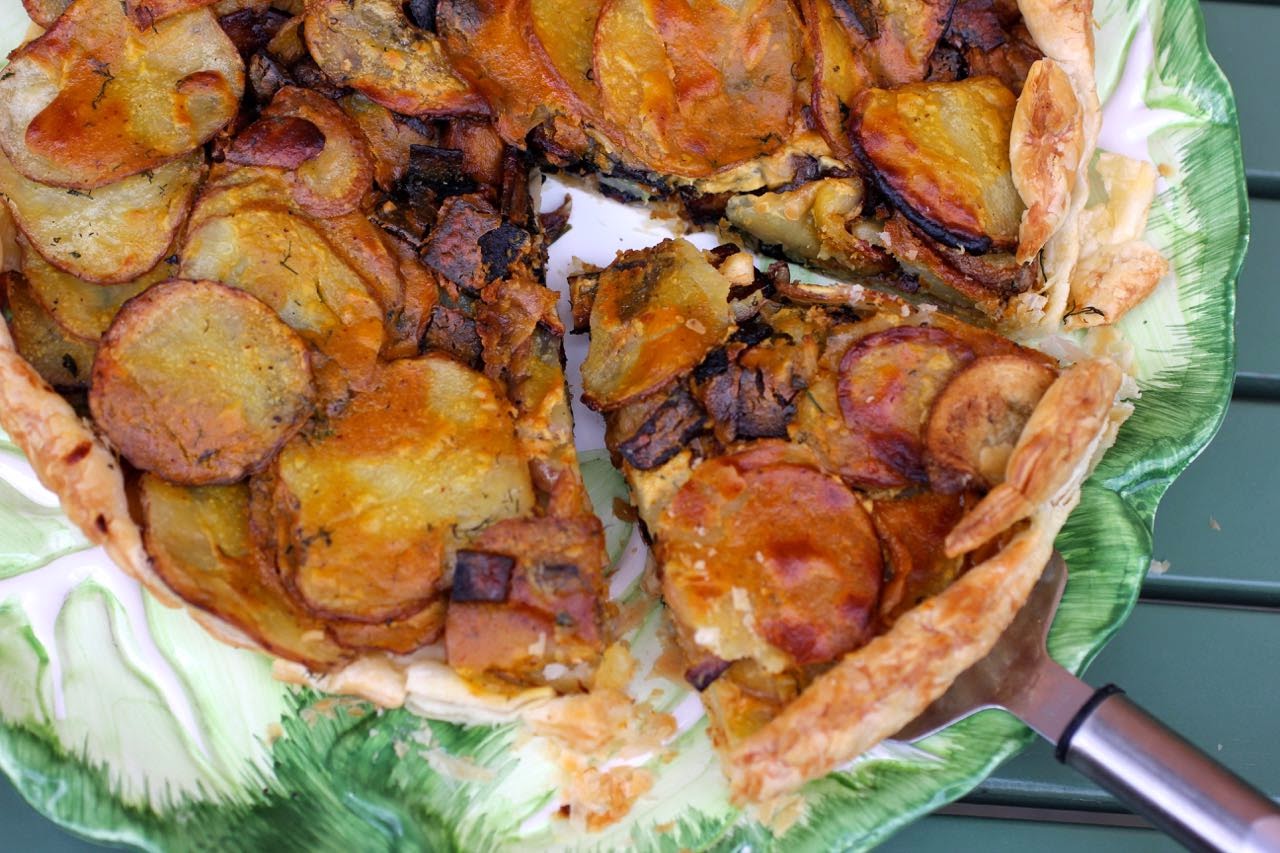 I don't claim that my Irish ancestors would understand this pie.  The potatoes would be familiar enough but my vegan changes to the recipe would no doubt be a mystery to them.  However I like to think that they would appreciate me acknowledging my heritage today.  And perhaps even be pleased that I wore green in honour of them.

I had a few other nice green moments today that I will share:

Green Moment 1: Today I was talking about green with a friend and how despite there never been enough green clothes for me, I have a few green cardigans.  If I do see them I snap them up.  Perhaps this explains my purchase of a new green leafy plate from an op shop.  It is in most of the photos on this post so I have had good use out of it already. 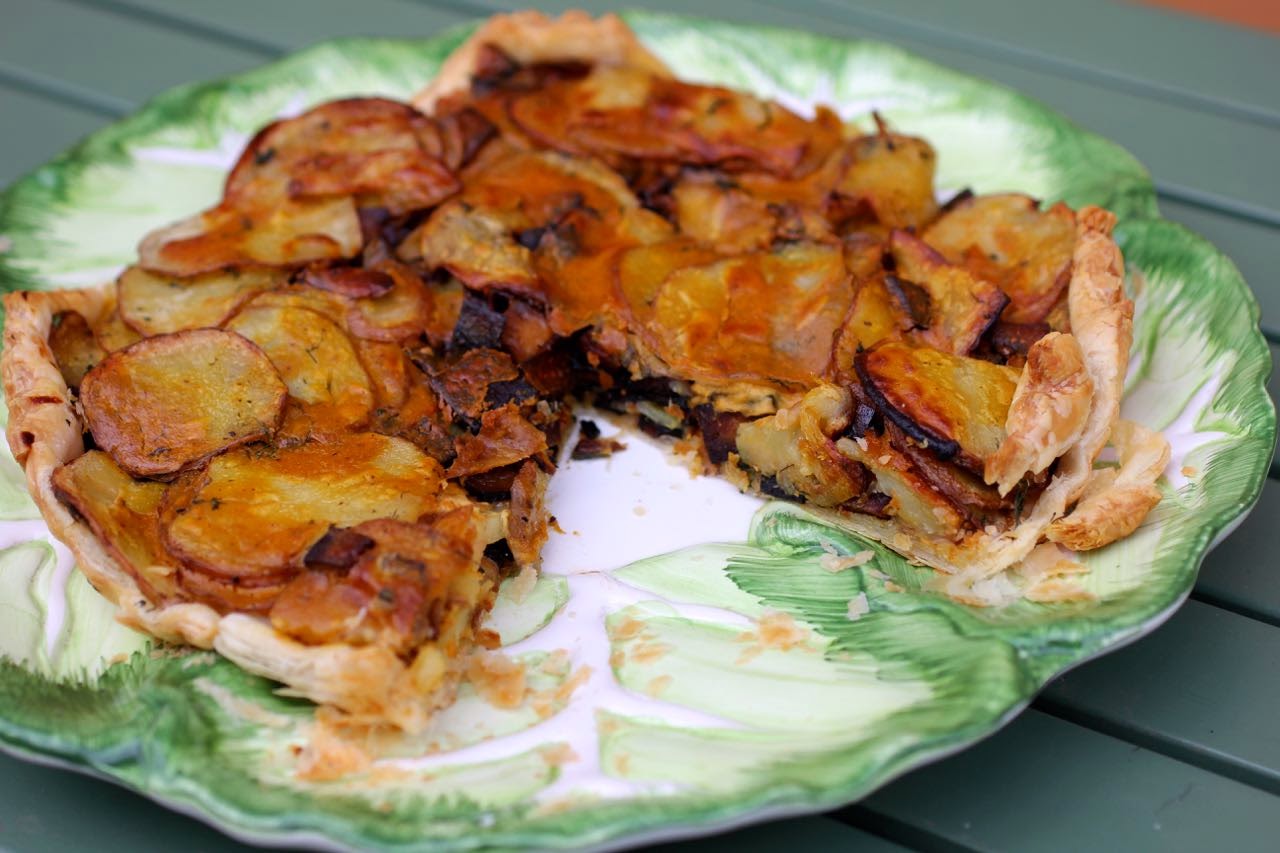 Green Moment 2: I made myself cheesey peas on toast for lunch.  I heated and mashed some green peas.  I mixed them with a spoonful of cream cheese and a little grated cheese.  It was very nice with a grinding of black pepper and some time under the grill.  However the peas were quite sweet so perhaps some spring onions in the mix would give the bite it needed.  A nice easy lunch that I would be happy to eat often. 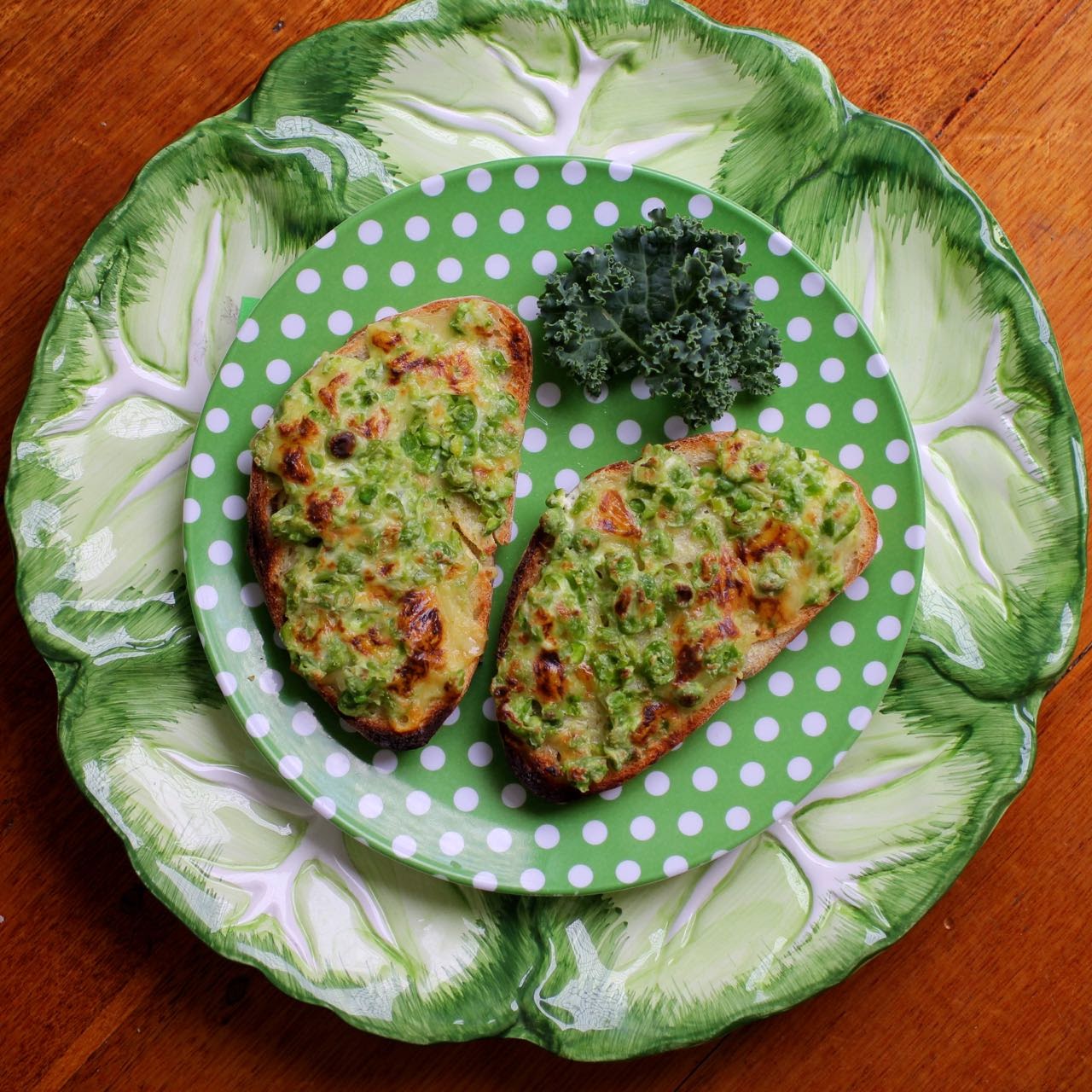 Green Moment 3: Finally tonight we finished reading Sylvia's book: Lob by Linda Newbery.  It is about a little girl and her grandfather seeing a little green man in the garden called Lob.  Unusually I found myself more absorbed by this children's book than by the book I have been reading (Sucked In by Shane Maloney).  Lob is such a beautifully written book about loss and our connection with the natural world.  It made me want to go outside and nurture a garden.  Anyway I have finished my book and am now about to start Neil Gaiman's Trigger Warning.

I am sending the potato and facon pie to A Mummy Too for Recipe of the Week for 14-20 March, and to Jen’s Food (and United Cakedom) for a new event called The Pastry Challenge.  I am also sending the cheesey peas on toast to Deb Souper Sundays, a weekly soup, salad and sandwich blog event, because I hope she will accept this as an open sandwich.

Let pastry thaw while frying the (uncooked) tofu bacon in the oil until golden brown.  While the facon is frying slice the onion and potatoes thinly as possible.  Press thawed puff pastry into a 20 to 22cm pie tin and chill in fridge until ready to fill.  Remove facon from pan with a slotted spoon to leave as much oil as possible in the frypan.  Set aside in a bowl.  Fry the onion until golden brown and transfer to bowl with facon.  Now fry the potatoes until just starting to soften.*  Return facon and onions to frypan to warm through and mix with potatoes and parsley.

Arrange potato mixture in lined pie tin.  Pour the sauce over it.  Bake for 30 to 40 minutes or until potatoes are golden brown and feel soft when a knife is poked through them.  Set aside for 10 minutes and serve in wedges with vegies or salad on the side.

NOTES:
I forgot the onion but would like to add it next time (if not trying to please a particular child).  Dill is too exotic to taste bog Irish!  I used red skinned potatoes and did not peel them.  The recipe I followed used dill so I used up some dill but it didn't taste quite right to me so next time I would use parsley. The hurry up alfredo cheese sauce that I used gave a lot of flavour so I used less seasoning that the recipe suggest.  I thinned it slightly with some tofu bacon marinade and some soy milk because I didn't quite have 1/2 a cup leftover.

I fried my potatoes in 2 batches for about 10 to 15 minutes each and baked them at 200 C because my oven has a bad track record with cooking through vegies but the recipe I followed said 3 to 5 minutes and don't worry if they potatoes aren't cooked.  I think that I could probably get away with 180 C next time but am not sure I would cook the potatoes less on the frypan.

On the Stereo:
Black is the Colour: Cara Dillon
Posted by Johanna GGG at 22:46