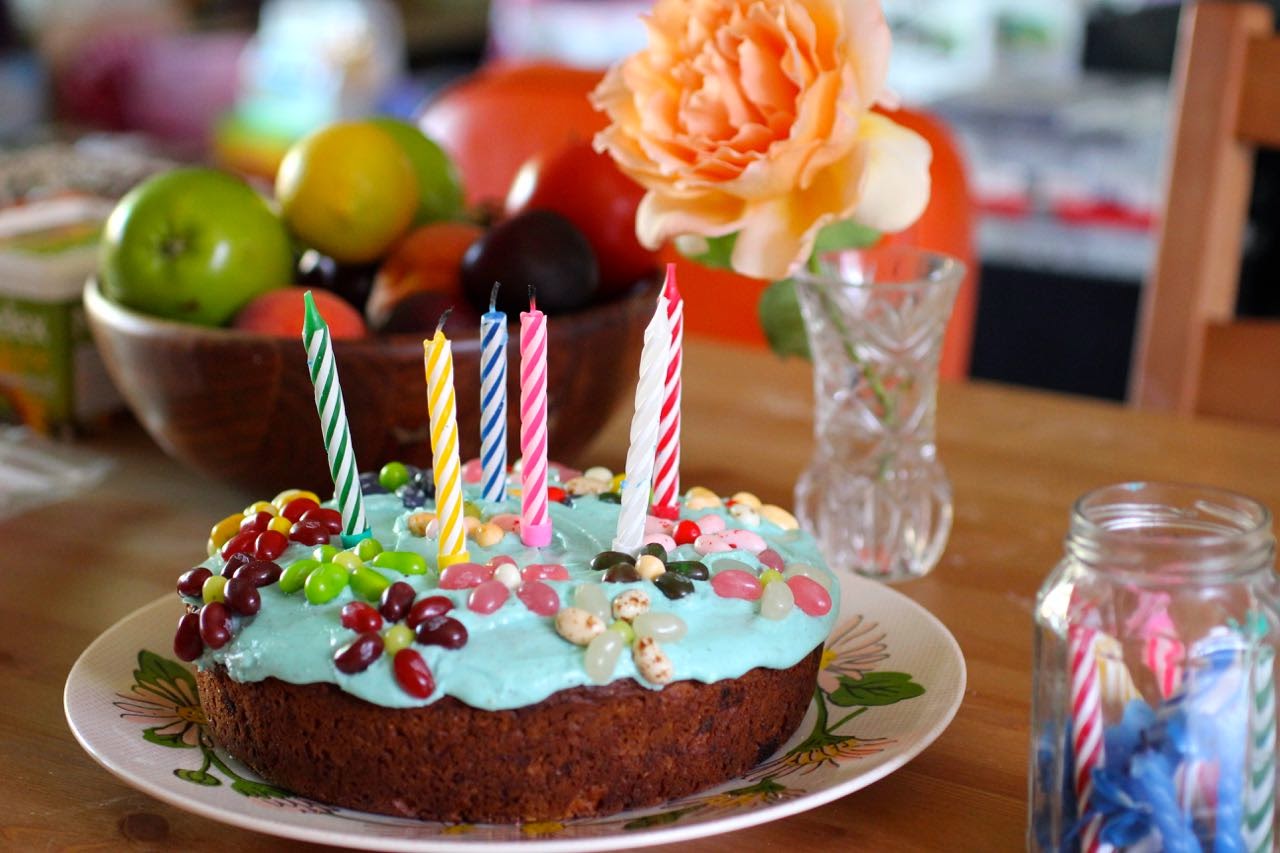 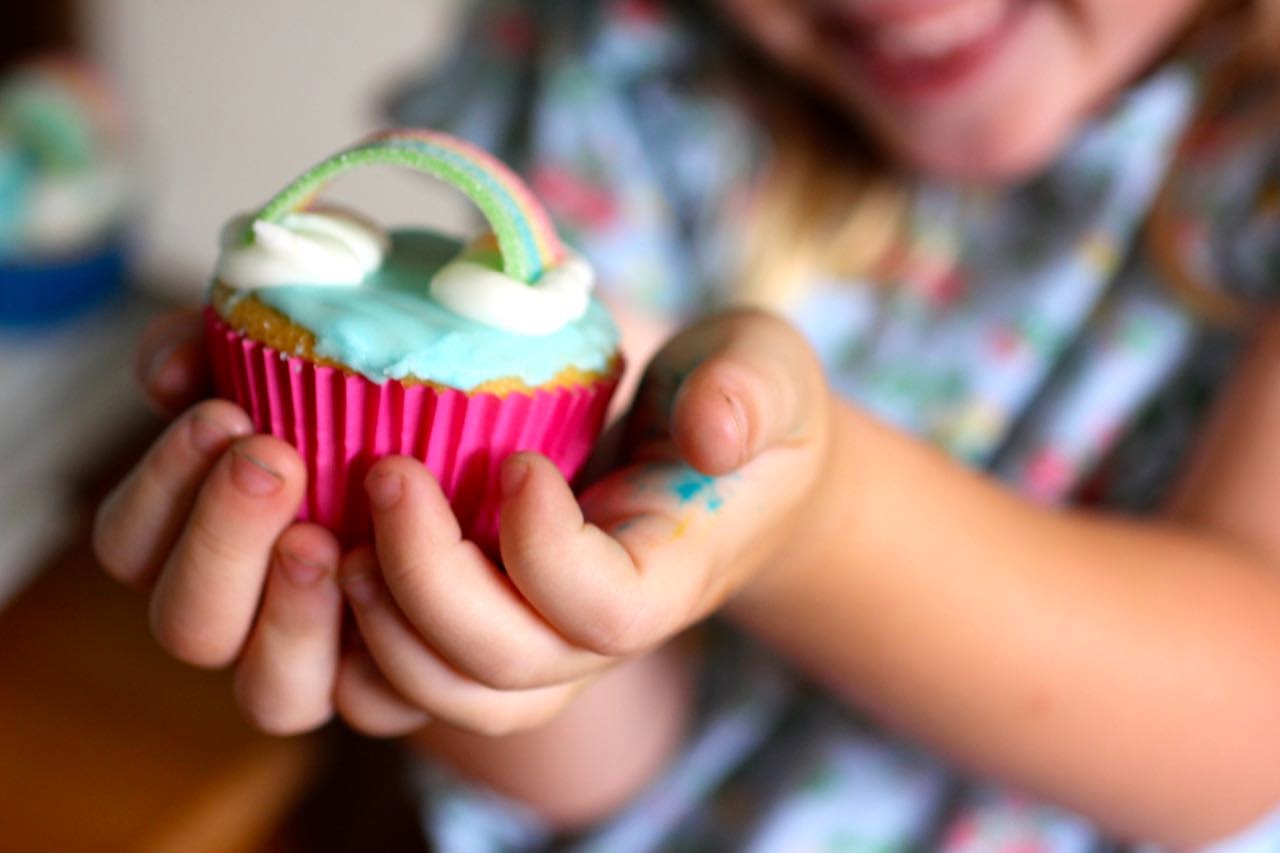 Firstly on the weekend before her birthday, I made rainbow cupcakes to take to a family birthday lunch followed by a swim at the pool.  The cupcake recipe I used was the same gluten free vanilla cupcakes that I had made for our jelly bean cupcakes recently.  As they are best on the day of baking, I made them early on the morning of the lunch so they cooled in time to decorate. 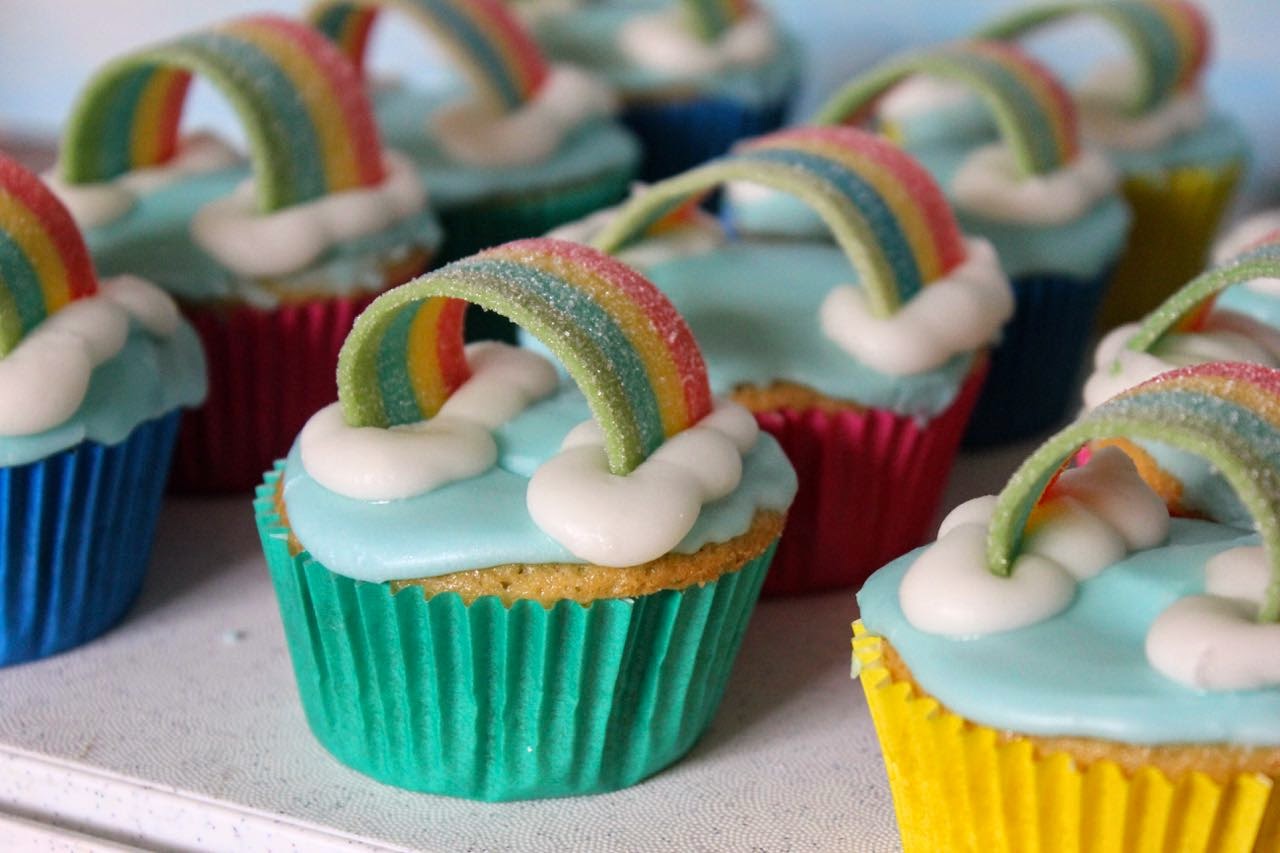 We had found the rainbow sour straps in the supermarket a week or two before.  Not as bright as some but they worked well with the baby blue icing to represent the sky.  I made the white icing for the clouds really thick so it kept its shape.  Sylvia helped to put the sour straps in the clouds (when not putting scraps of straps in her mouth)! 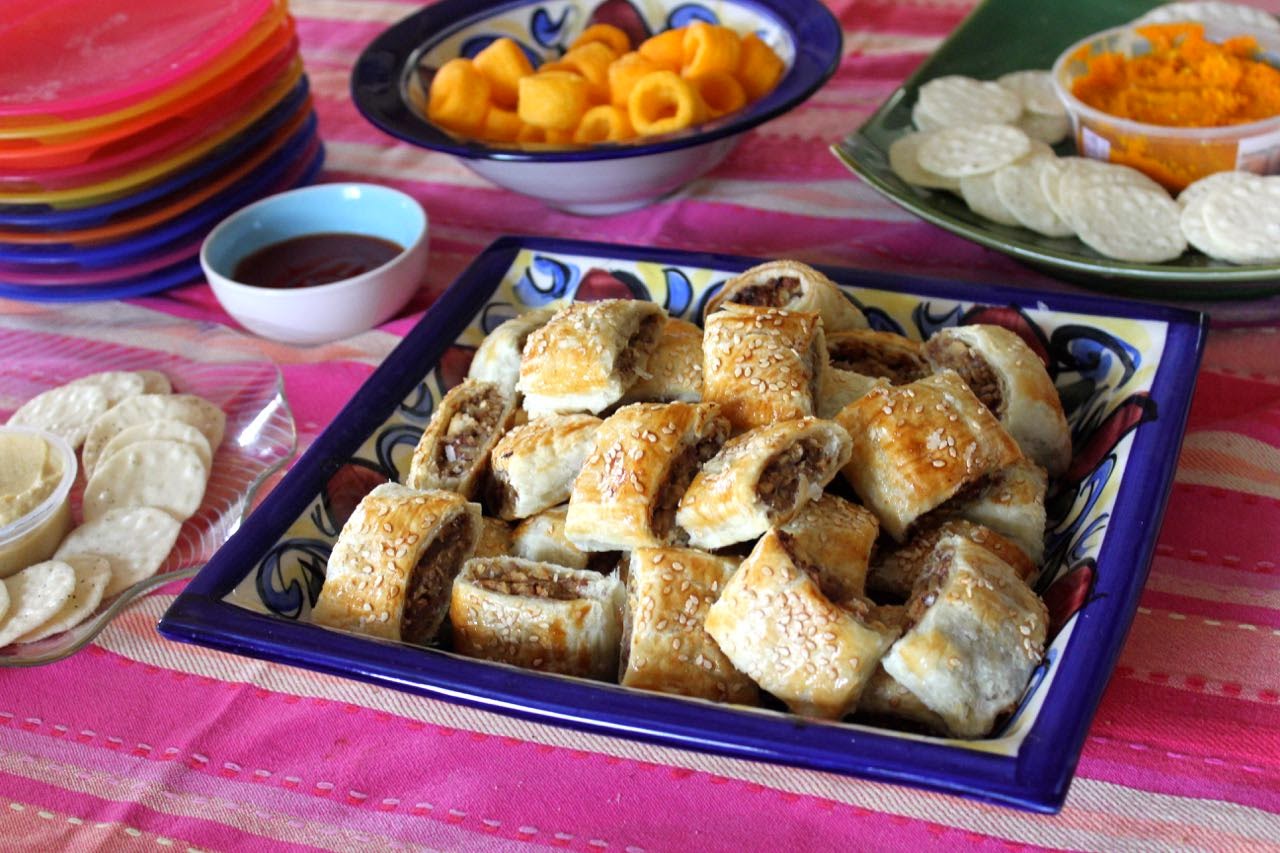 I also made sausage rolls to take down.  Sylvia has gone hot and cold on these but seems to be enjoying these lately.  They are easy traditional party food.  (Upon heading home at the end of the day we were happy to have left a few at home.)  We also had dips and chips and cheezels.  The desserts, however are the star of the show for my little sweet tooth Sylvia! 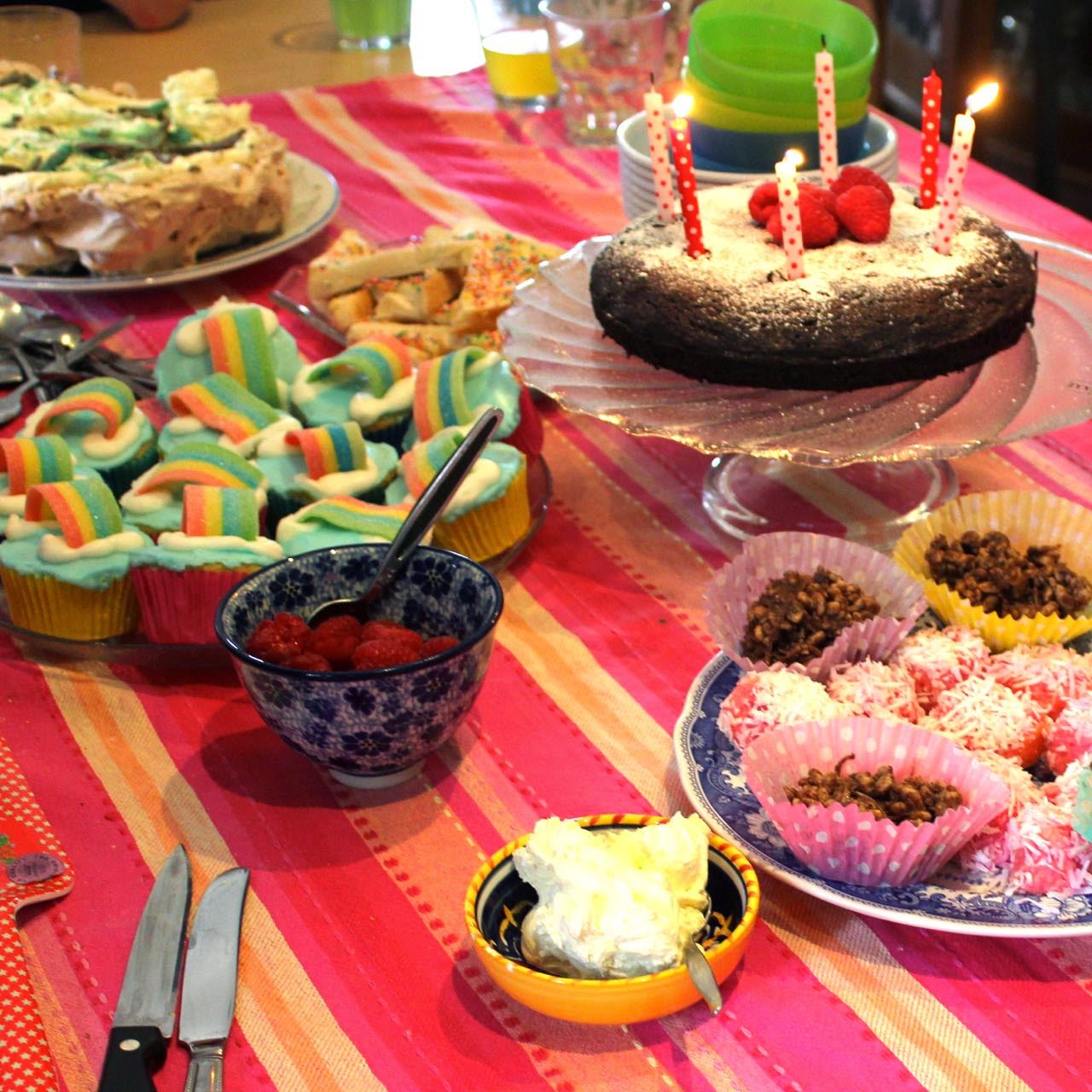 As you can see in the above photo the rainbow cupcakes were a little flatter at the end of the journey to my parents' house than when we left.  No doubt a hot day of 36 C didn't help.  You might also notice that my mum had a field day baking.  She made pavlova, as requested by Sylvia, as well as chocolate cake, fairy bread, chocolate crackles, little cake with pink icing (also a birthday girl request) and jelly cakes!  We didn't eat them all but no one left without a little package of goodies. 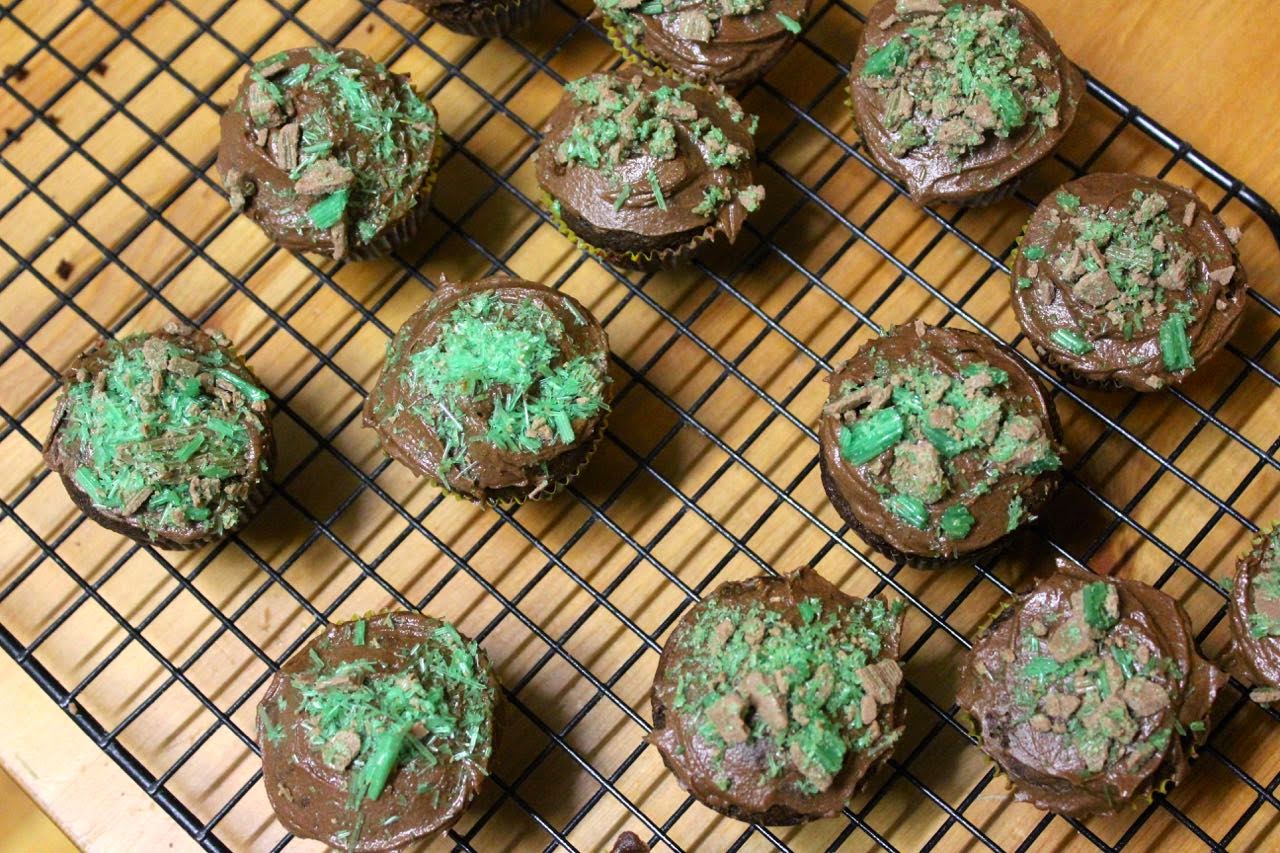 The night before Sylvia's birthday I baked chocolate mint cupcakes for her to take to school.  They were a variation on the vegan chocolate cakes that I made last year for her class.  This time I put a little peppermint essence in the cake mixture.

The main attraction was the crushed peppermint crisp.  My mum always puts it on pavolva.  I thought it would work on cupcakes but after Sylvia had helped me sprinkle it everywhere (table, hair, floor) I worried that it would melt overnight.  I was a little bit right.  It was still edible but so so so sticky.  Sylvia and her friends seemed to love it.  One kid was seen licking icing off the tub after school! 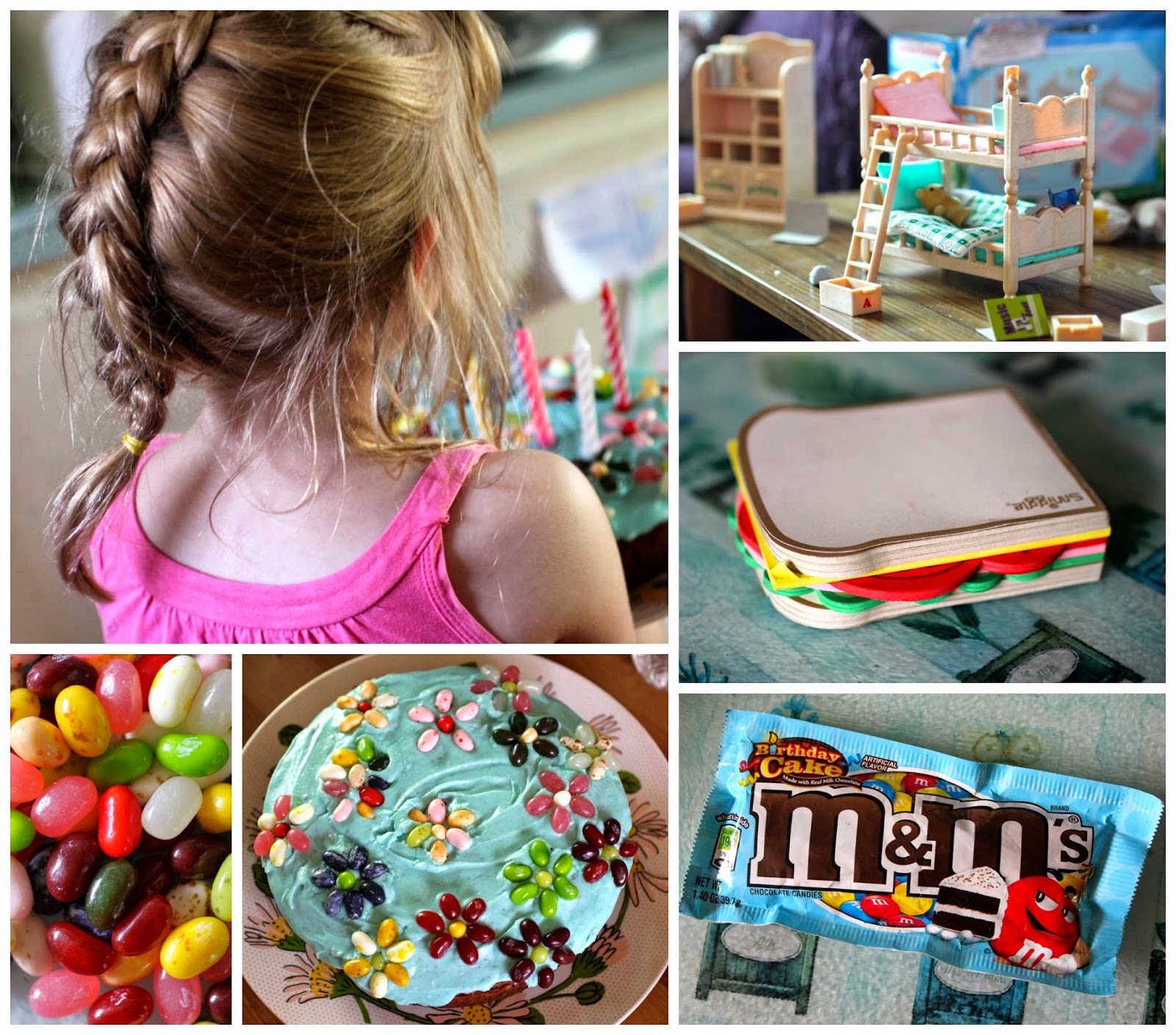 Sylvia had many special treats on her birthday.  I took her to the hairdresser who braided her hair after the haircut.  I also took her along to the lolly shop to introduce her to the joys of jelly belly jelly beans.  I still remember discovering them as an impressionable 14 year old and I still am amazed by the range of flavours.  Some of Sylvia's favourite flavours were candy floss, buttered popcorn, caramel corn, toasted marshmallow, banana and watermelon. 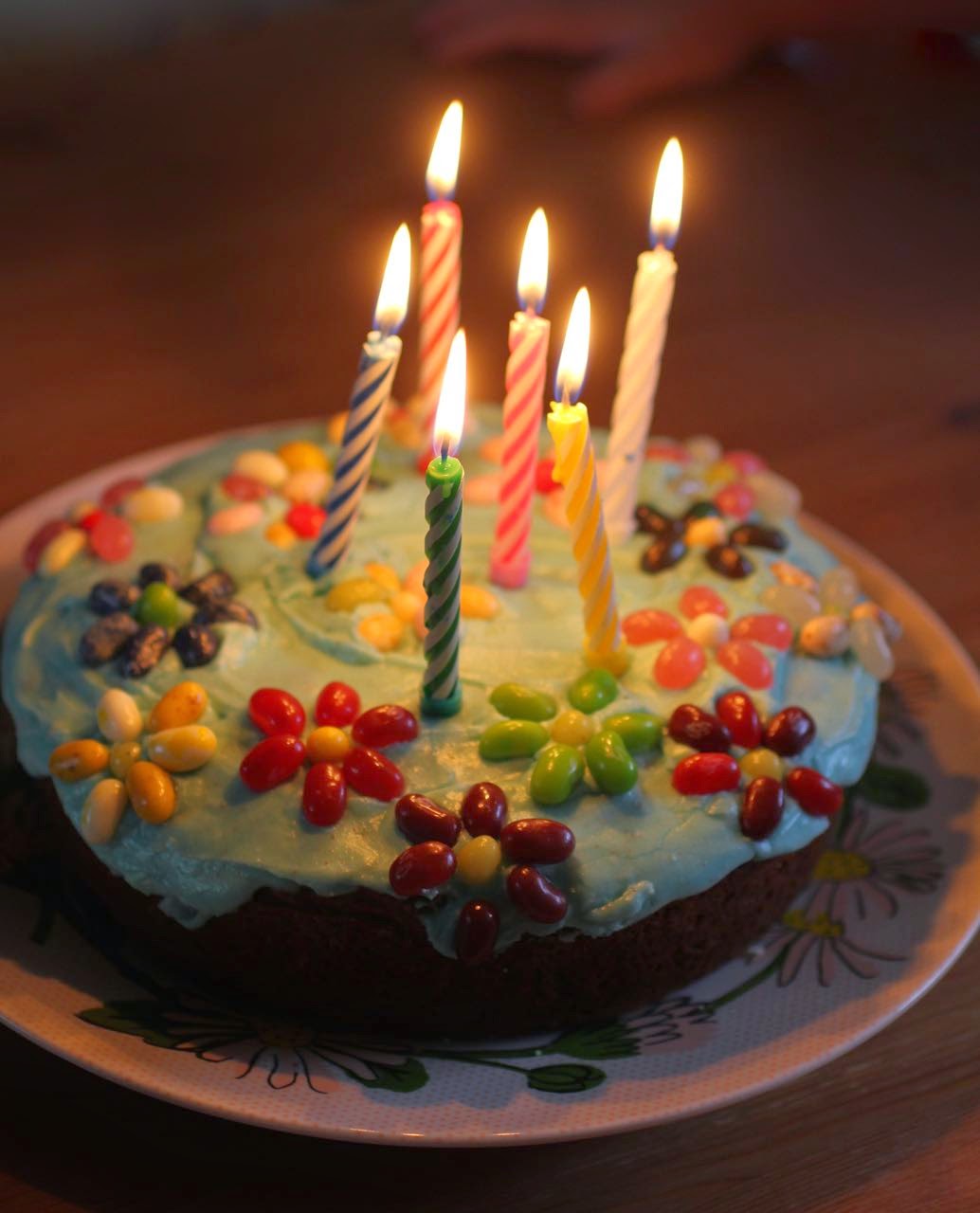 For her birthday, her request for dinner was pasta with parmesan.  (I added some tomato and chickpeas on the table as well).  After school we decorated the banana yoghurt cake (which is becoming a favourite birthday cake) with leftover blue icing and jelly belly flowers.  When dessert came, Sylvia amused me when she cut herself a circle shaped piece of cake around her favourite flower!  It was the one with lots of different colours. 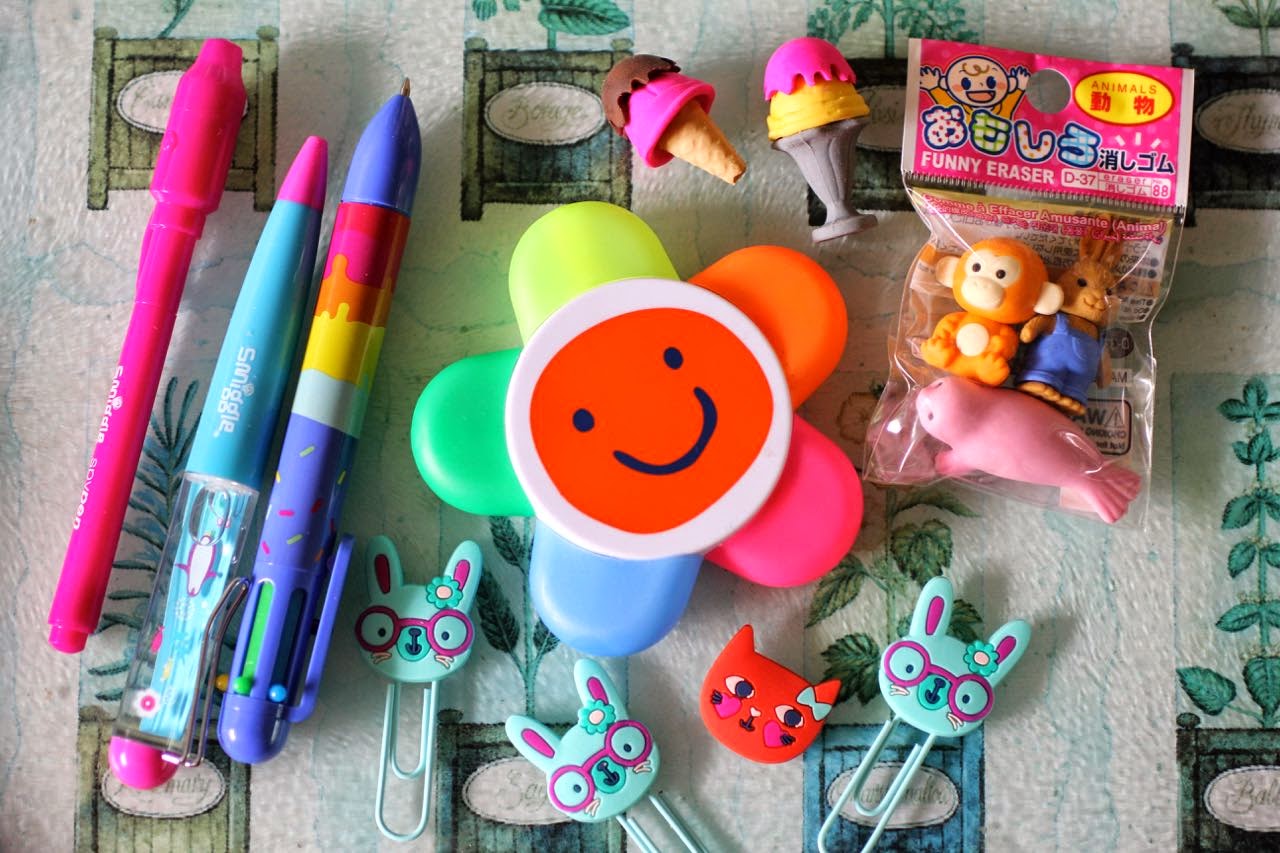 Here is a picture of more of her presents.  She is very into stationery lately.  Pens, pencils, erasers, sharpeners, notebook, clips.  (She has just discovered Smiggle!)  She was also very spoilt with lots of other lovely presents - books, craft kits, clothes and a little trampoline for the backyard.  And there was a party.  I will soon share some of the party food!

I am sending the rainbow cupcakes to Caroline Makes (and The More Then Occasional Baker) for the Alphabakes blog event.  This month the theme is the letter S (for Sour Straps).  I am sending the jelly belly flower cake to Eat Your Veg (and Bangers and Mash) for the March Family Foodies event: Let's Get Baking.
Posted by Johanna GGG at 22:43