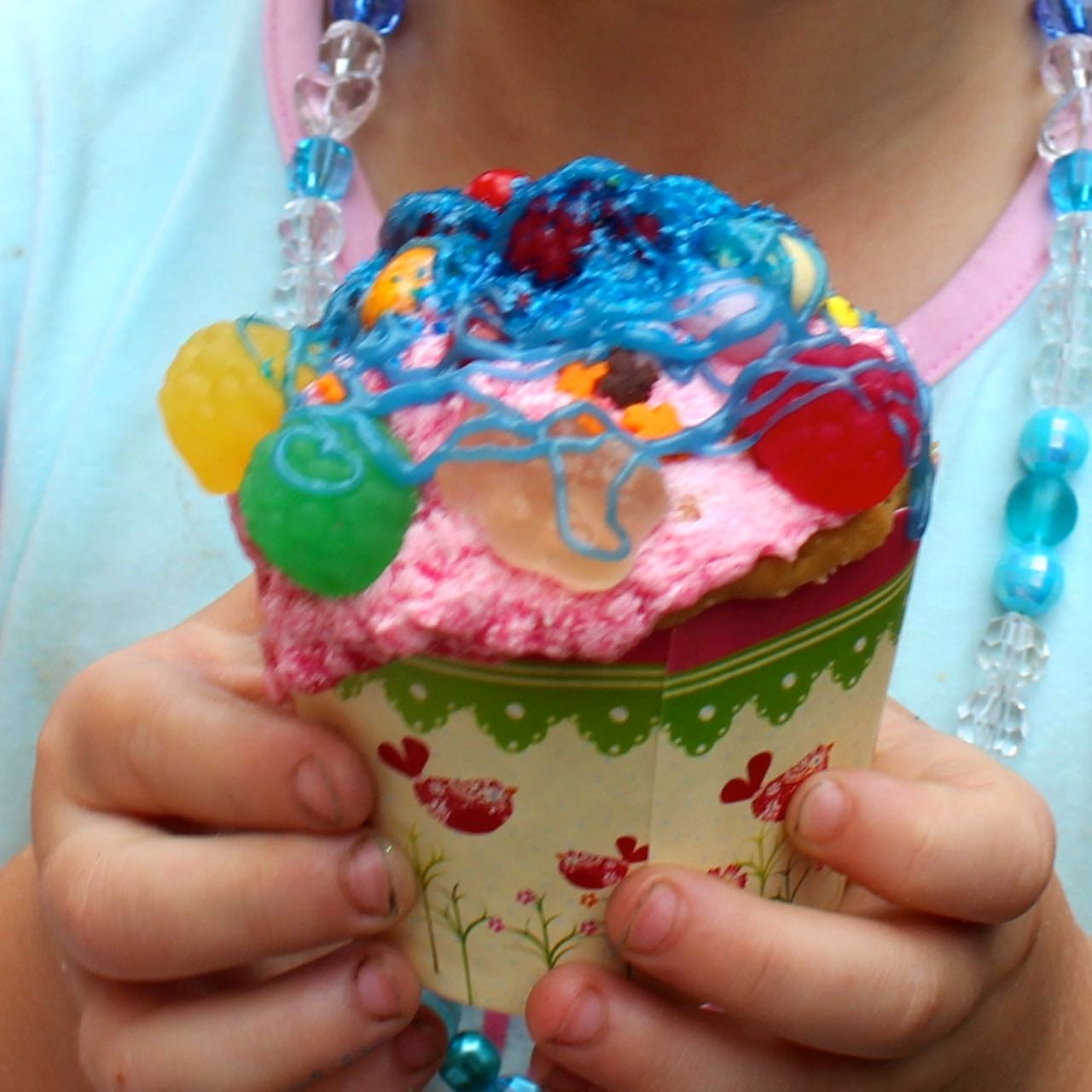 When planning Sylvia's birthday party one of the first activities that we decided upon was cupcake decorating.  Sylvia was very excited about it.  I was pretty happy at the idea of using some of the sprinkles and tubes of icing that lingered in the pantry.  I love the look of the stuff but am less keen to eat it which creates a dilemma when decorating cakes. 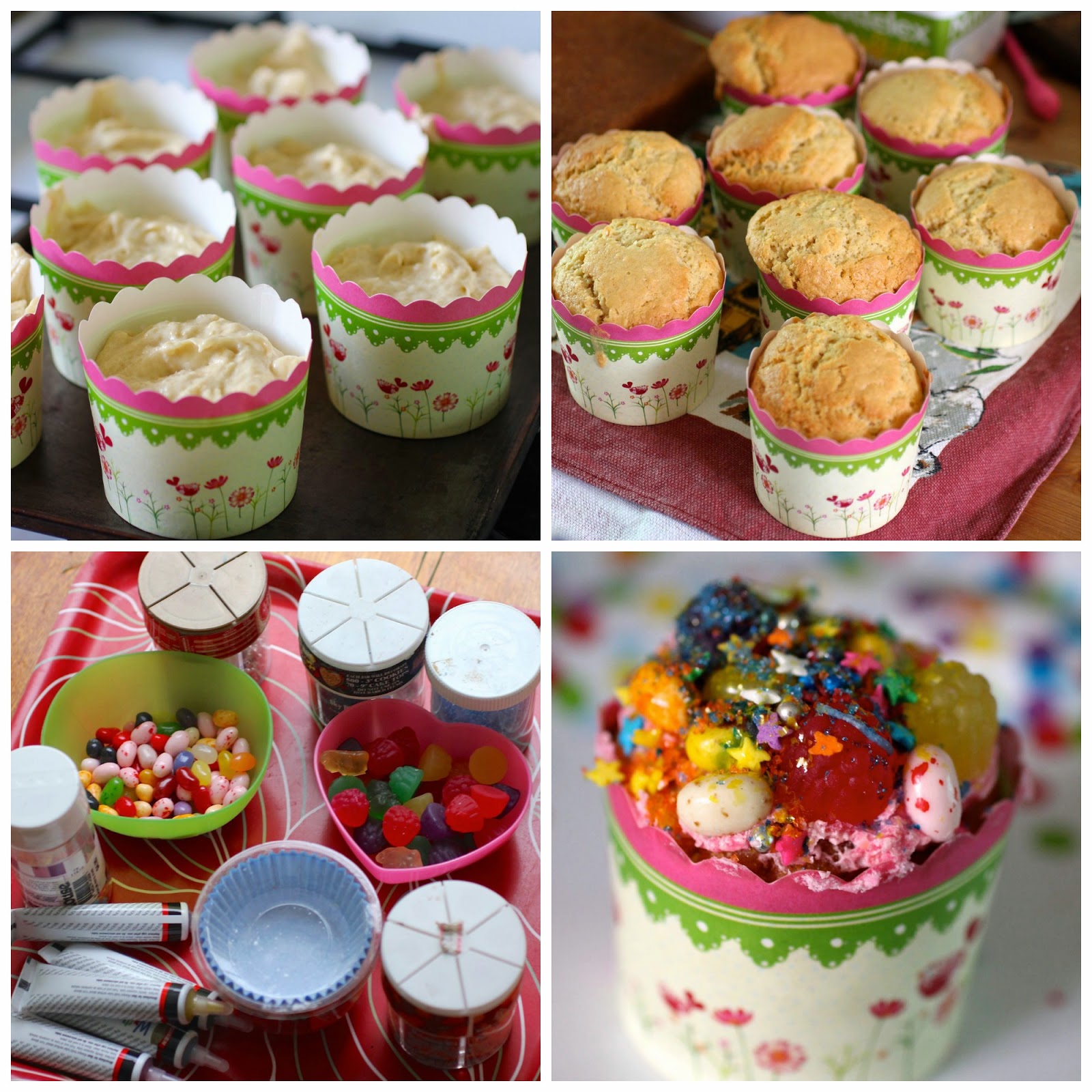 I bought some sturdy paper muffin cups so that the cakes would not collapse in the little hands.  I also decided to bake the cakes the day before because cakes can be quite fragile on the day of baking.  I found a recipe for patty cakes (as we often called small cakes or fairy cakes before the advent of "cupcakes").

Unfortunately the muffin cups were rather large and I only made 8 rather than 12 that the recipe promised.  They were rather large for little girls to eat and I would have preferred one or two spare cupcakes in case of accidents.  At least they were easy to handle and gave plenty of scope for decoration. 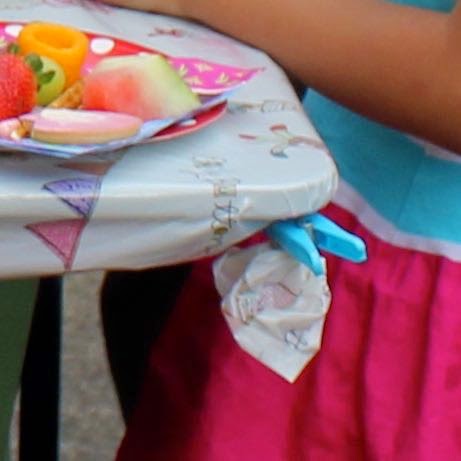 This was an activity for the backyard.  I didn't want sticky sprinkles and icing all over the house.  The weather kept threatening to be too hot or too wet but in the end it was overcast and mild enough.  I prepared a tray of sprinkles, lollies, icing tubes and spreaders that could be taken outside as we started.

It was quite windy but Kerin showed me how to secure the tablecloth with a twist of the cloth and a peg at each corner.  My parents also helped by bringing over one of their trestle tables. 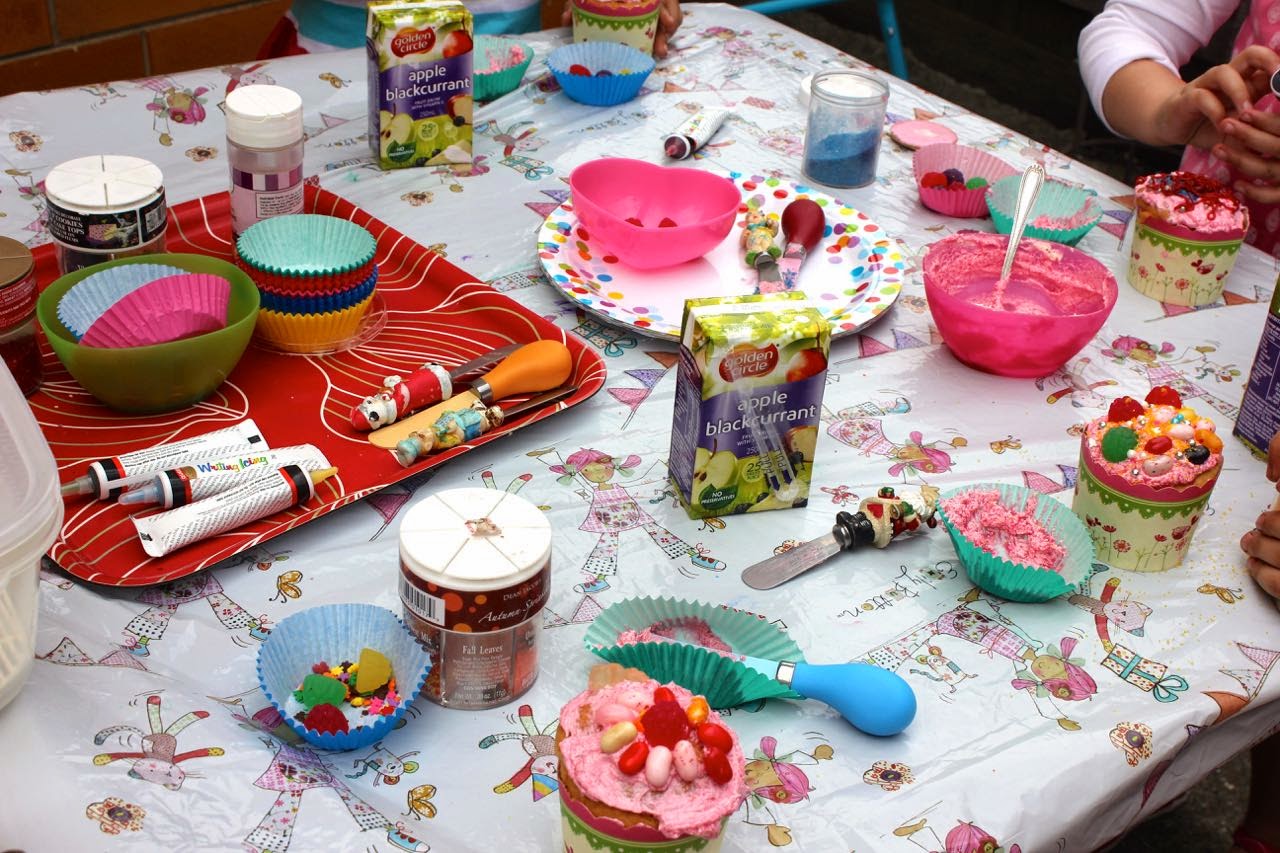 I had lots of icing leftover from the castle cake, though I made the mistake of adding a little milk because it was so thick and it curdled.  I coloured one lot pink and another yellow.  I may have well not have bothered with the yellow.

I used cupcake papers to give each child a paper with a few spoonfuls of icing and a paper for them to choose some sprinkles and lollies.  This was to stop them loading up all the lollies or sprinkles.  Each child also had a spreader - they are quite short blunt knifes for butter and dips.  They were easier for kids to handle and don't flip over like longer bread and butter knifes. 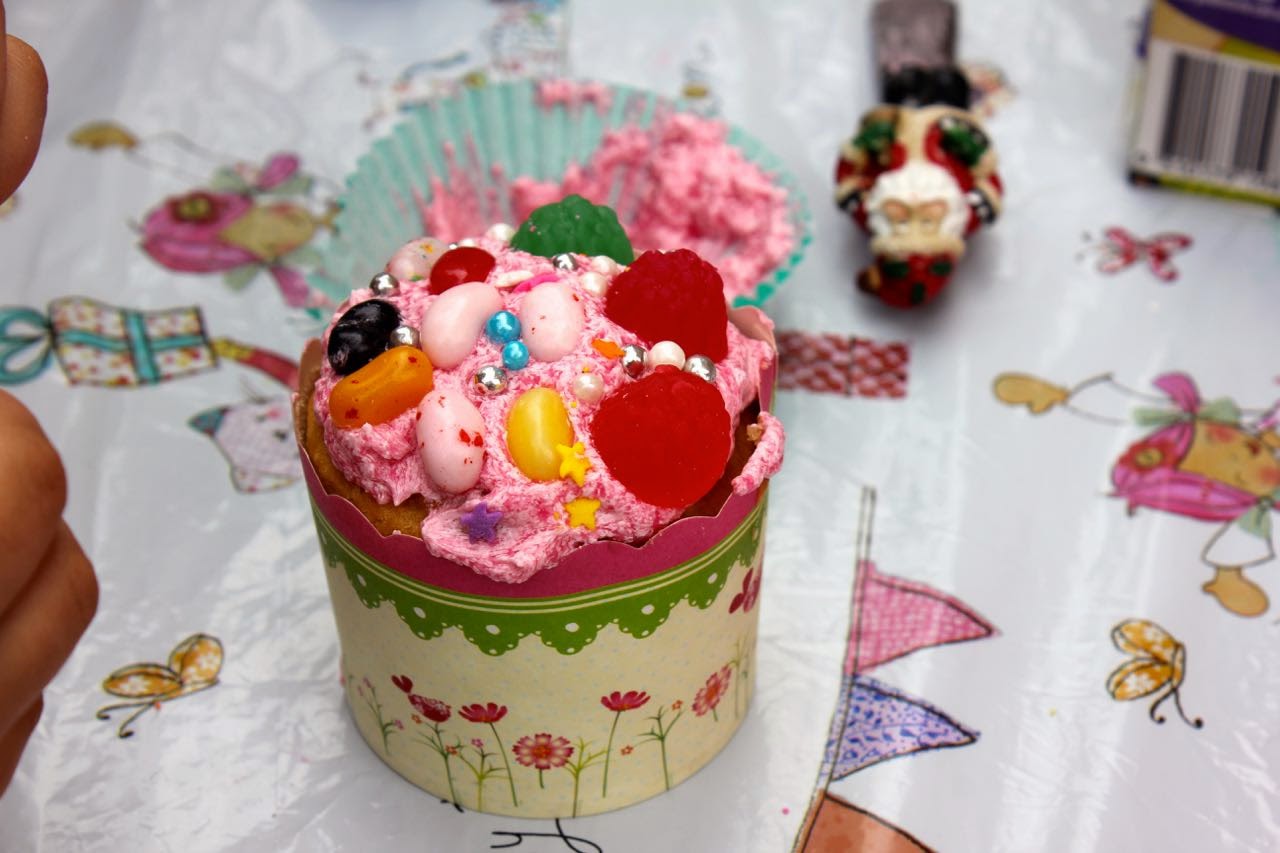 The kids just loved decorating their own cupcake.  (Again it might have been helpful to write their names on each cupcake but they seemed to know their own.)   They were so proud of their creations.  A couple of kids came late but one of the parents helped to decorate the extra cakes so they had one each.  I had expected that the kids would eat their cupcakes with afternoon tea but there was so much food that they ended up taking them home.

I am sending the patty cakes to Caroline Makes (and The More Then Occasional Baker) for the Alphabakes blog event.  This month the theme is the letter S (for sprinkles).  I am also sending them to Eat Your Veg (and Bangers and Mash) for the March Family Foodies event: Let's Get Baking.

Patty cakes
From Kidspot
Makes 8 to 12

Cream butter and sugar.  Add eggs and vanilla.  Beat until smooth.  Fold in half the milk and half the flour and then repeat with remaining milk and flour.  Spoon into pattypan cups or a greased pattypan (or muffin or cupcake) tray.  Bake at 180 C for 12 to 15 minutes or until golden brown and a skewer inserted in the middle comes out clean.

Update February 2018 - made these and found that mini muffins needed 12-15 minutes and cupcakes needed 15-20 minutes.  My oven is a little slower than some so perhaps 12-15 minutes is better for most people!

On the Stereo:
The definitive Simon and Garfunkle
Posted by Johanna GGG at 15:38