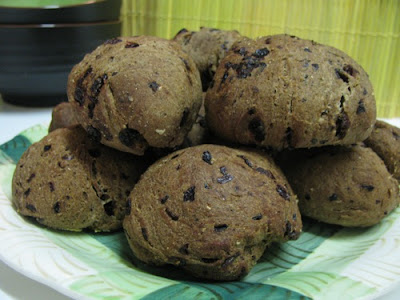 When I saw the theme for the Cookbook Challenge was European a few weeks back (yes I am behind in my challenges), one recipe planted itself in my mind and refused to leave until it was made.  It is an old favourite that I have made a few times before.  I know it is a tricky one to make but fortunately I also know it is worth the effort to make Mollie Katzen's pumpkinickel rolls with raisins from Still Life with Menu. 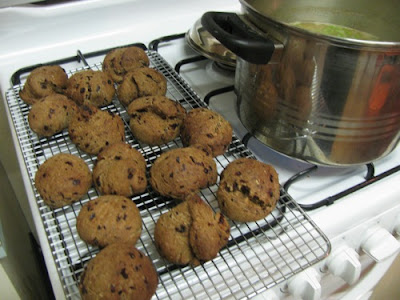 Last weekend I finally had the rye flour and the time needed to make them.  I decided they would go nicely with a pot of split pea soup.  Fortunately I started early in the day as these took me 7 hours to make, plus a lot of hard work.  It took me a while to find rye flour, but I was more relaxed about the other ingredients which I usually have on hand.  Hence on the day of baking, I found that I was really low on yeast and found a packet that was a year out of date.  I also ran our of molasses and used treacle.  One change that I have always made is to use currants rather than raisins.

Sylvia wanted to help. and stirred (sloshed) while the going was easy but E helped distract her while I kneaded in the flour.  This is dough that is so stiff my wrist was hurting.  It is very different to my usual soft malleable olive oil dough.  In fact it is not at all pleasurable.  As I kneaded I thought about dough hooks and how pumpernickel bread was around long before anyone had considered them.  So why make a dough that is so stiff it hurts?  Maybe Mollie Katzen was using our light fluffy flours to imitate bread made by peasants who could only access hard recalcitrant flours.  Ah, you see, I had too much time to think as I kneaded. 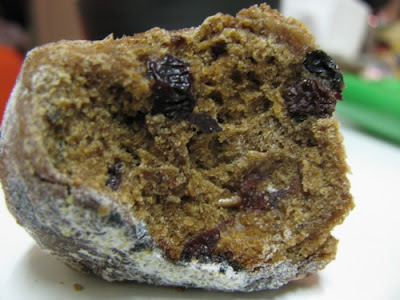 The resulting rolls were excellent.  They were surprisingly soft, despite being very dense.  The texture was far more towards the cake end of the spectrum than most breads.  Best of all, the flavours were amazing.  This is why I keep returning to the recipe.  I first made the rolls to serve with a celery and stilton soup (I think).  Despite being slightly sweet (or too sweet if you are my mum) they have a bitter edge that makes them perfect for adding a bit of interest to a pot of soup. 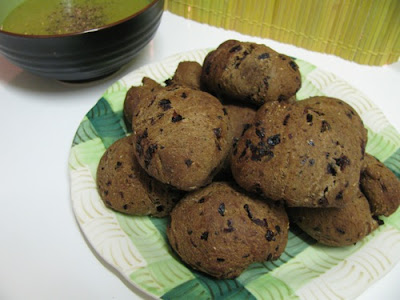 Sylvia seemed to like the pumpkin rolls when I made them last weekend.  She ate one in the car on the way to an indoor play centre where we met my friend Jane and kids.  She also had one with her evening meal.  Then the next day she wasn't interested in them.  E wasn't so interested in them.  So I frozen most of them and had them with leftover soup for lunch during the week.  Now that is a fancy lunch!  They are so flavourful that I found they were great on their own for breakfast.

I highly recommend these if you want to impress or are looking for some bread that is very different to your fluffy white loaf.  However only make them if you have time and a bit of energy.

I am sending these to YeastSpotting, Susan's lovely weekly yeasty round up.  You can see what my fellow cookbook challengers got up to here. 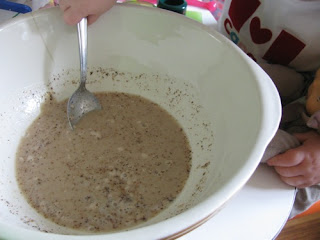 Place lukewarm water, and yeast in a large bowl and let 5 minutes until it starts to frotth (my yeast was quite old but there was something happening - not so much frothing but more like the yeast film on the water separating to reveal a murky underneath with a little swirling - after 5 minutes so I went ahead with it).  Stir in molasses, raisins (or currants), wattleseed and salt.  Drizzle in chocolate.  Mix well. 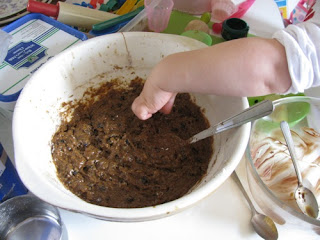 Stir in 2 cups rye flour and 1 cup of white flour.  It should be just stiff enough to knead if you have lots of flour - though it reminded me more of cake batter than bread dough.  Mine was so sticky it needed a lot of flour to be able to handle it - it would probably work better in a stand mixer with a dough hook if you have one. 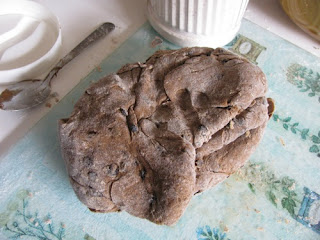 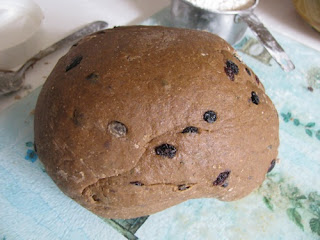 Place dough in bowl, cover with a dry clean tea towel and let rise in a warm place for about 3 hours or more (I left mine for 4).  The dough will only rise by about 3/4.  Cut dough into 16 pieces and roll each piece into a ball.  Sprinkle a large baking tray with cornmeal and place rolls on it at least 3 inches apart.  Cover and leave to rise for about 45 minutes. 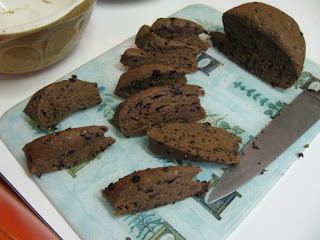 While the rolls are rising, preheat oven to 375 F or 190 C.  When rolls have proved (or risen ever so slightly) bake for 30 minutes until they sound hollow when

On the Stereo:
Exotic Moog: Martin Denny
Posted by Johanna GGG at 17:01