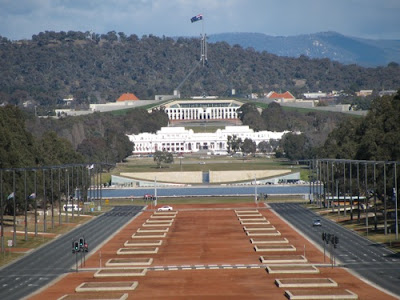 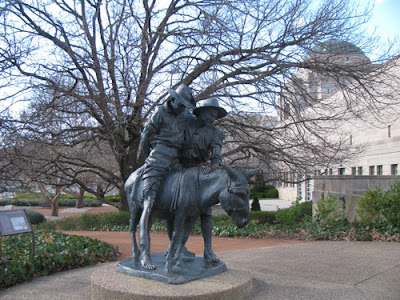 Before telling you about some of the food and museums we encountered, I would like to stop and reflect on Canberra history.  It was established between Melbourne and Sydney because the rivalry between our two biggest cities made it difficult to use an existing city as the capital.  After an international competition, American Walter Burley Griffin was appointed to design Canberra.  Work commenced on Canberra in 1913 and the first block of land was sold in 1924.  I love its unashamed modernity.  It wears its Twentieth Century origins on its sleeve.

The picture above from the Australian War Memorial (see more about it lower down the post).  It shows its grand building, statue and wide open spaces.  At the top is the gorgeous sweeping view from the Memorial down along ANZAC Avenue towards the old and new parliament houses. 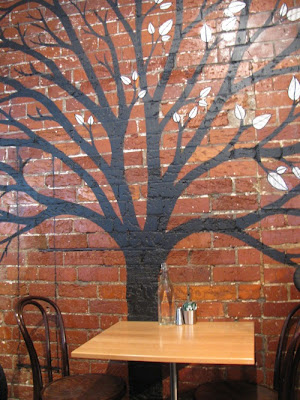 We stayed in Manuka so I was delighted to find that Hannah's recommendation of Urban Pantry was a short walk from our holiday apartments.  On our first morning we headed down for a leisurely breakfast.  It was a chic cafe with cool artwork on the brick w all, tables held up by iron girders, displays of amazing cakes and breads, and a huge red pepper grinder that fascinated Sylvia.  She also kept asking "where is the little girl?"  After a while we discovered that the "little girl" was our waitress. 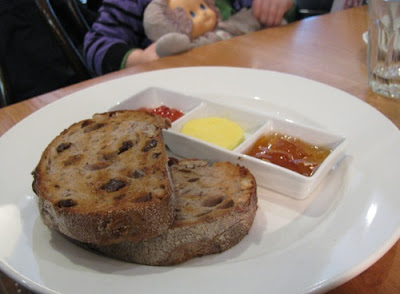 The food had something for everyone: a fry up for E, walnut and raisin toast for Sylvia, and an interesting vegetable dish for me.  I ordered the "Pumpkin and potato cakes with rocket, avocado, sour cream and red onion jam".  It was very fresh and light but the pumpkin and potato cakes required quite a bit of seasoning because the onion jam was quite sweet.  I enjoyed the mix of flavours and the pretty way it was plated up. 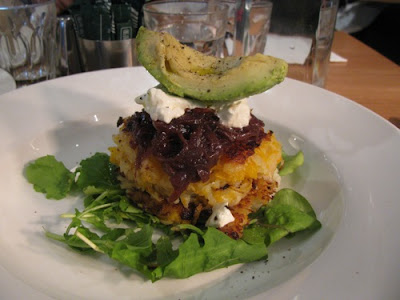 My brunch wasn't terribly filling and I was so intrigued by the Breakfast Smoothie that at the end of the meal I just had to order it.  The smoothie was made of berries, almonds, banana, oats and honey.  Unfortunately it was too much milk and honey with not enough fruit for my liking.  However when I gave E a taste he loved it because it wasn't filled with fruit.  I intended to return to buy the enticing bread and/or cakes but never got the chance. 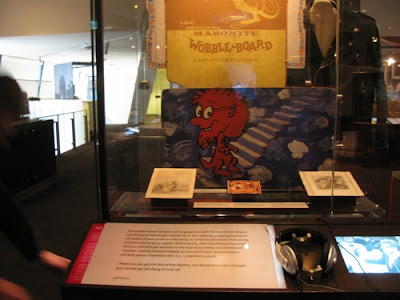 After brunch we headed over to the National Museum of Australia.  This is a relatively new museum, built in 2001.  I have managed a visit to the gift shop before during work trips but this was my first proper visit.  I liked it but I didn't love it.  Modern museums are often a disappointment to me.  They try to do too much.  They focus on words rather than artefacts.  It is really hard to read a lot while chasing a giggling toddler all over the museum.  I did love the children's corner with all the doors that opened to various things for kids to learn about.  What I love about modern museums is some of the interactive reproductions.  We loved the opportunity to play one of Rolf Harris' wobble boards.  And the gift shop is fantastic. 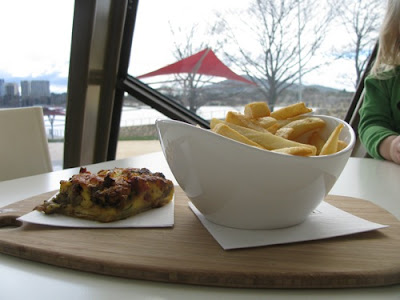 We had lunch at the museum's cafe, called Cuiseum.  It is run by Peter Rowlands Catering which does a great job for museum food.  I ordered spinach, blue cheese and sun-dried tomato quiche.  It was full of interesting fillings, creamy and not too watery like quiches can be.  There were a few vegetarian options, including a soup.  Sylvia had chips, which were very nice.  She also had her first ever taste of coke.  This maybe have been the cause of her tantrum in the middle of lunch, though I am not sure if it was the sugar and caffeine or the fact that we only let her have one mouthful. E would have enjoyed his pizza more if it hadn't been accompanied by said tantrum.  Sylvia might have been calmed more quickly if I had introduced her to the cool space-age highchairs earlier.  I also enjoyed the view of Lake Burley-Griffin.  Quite a few hungry birds could be seen walking past the large windows, looking in wistfully remembering the heady days of summer when people bring their food outside. 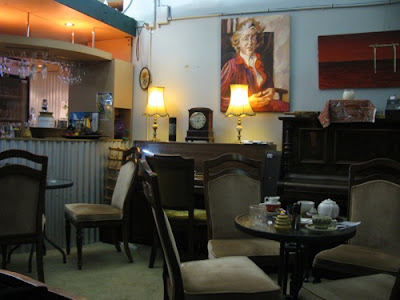 We also encountered a very helpful information desk guy at the museum who gave very helpful directions to get the our next destination.  Beyond Q is a huge second hand bookstore with a cafe inside.  I loved the corrugated iron counter, the original artwork and the grand old furniture.  Most intriguing was that they had not one but two pianos.  We were there to meet lovely blogger, Hannah, from the ever entertaining Wayfaring Chocolate.  She told us that they have gigs in the cafe, which I guess explains the pianos. 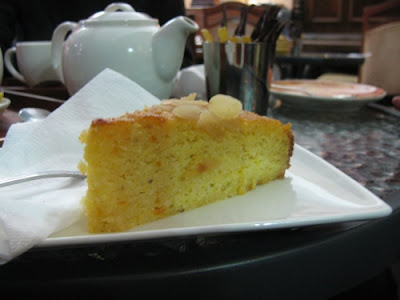 I ordered a slice of moist home made orange and almond cake and a calming pot of Cleopatra's Champagne tea (camomile with honey and lemon).  It was just lovely to relax on the sofa in the corner.  With a wriggly toddler!  Hannah got to watch how I hold Sylvia and photograph my food.  I am not sure if she was more horrified or admiring.  I can tell you that she is as charming in real life as she is on her blog.  All too soon, she had to go and leave Sylvia asking "where is Hannah?" 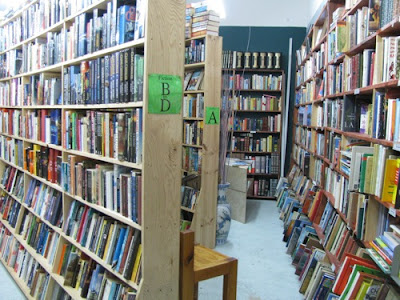 E had a vanilla slice.  At the time, he found it very sticky and difficult to cut up, but days later was remembering it fondly.  However he didn't spend too much time with his slice and pot of tea.  He was too busy chasing Sylvia around the many shelves of second hand books to give me a chance to catch up with Hannah. 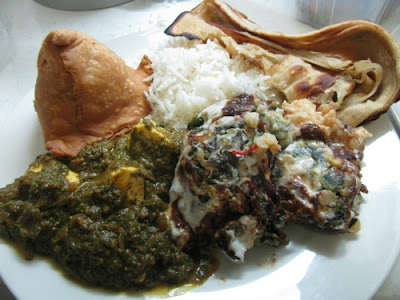 At the end of the day, we were very tired.  The seven hours drive of the previous day was catching up with us.  We headed back to our apartment to put Sylvia to bed and ordered takeaway Indian.  Someone had left a menu for the Jewel of India.  We rang them and ordered Vegetable Samosas, Palak Papdi Chaat (crispy spinach fritters on a tangy potato salad - I wanted the chickpea fritters but they were not available), Palak Paneer (spinach and paneer), Tandoori Paratha (wholemeal flaky bread).  It wasn't cheap but we had far more than enough for two people.  The fritters on the potato salad were a bit odd - cold and tangy didn't seem to go well with the meal.  But the palak paneer was wonderfully smooth and tasty. Overall it was a great meal. 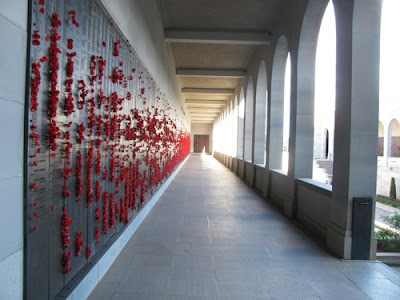 The next morning, we had boiled egg and baked beans at home for breakfast and set off for the Australian War Memorial.  This is a museum that I have visited quite a few times and it is one of my favourite museums.  I loved war history as a young person but as I get older it just makes me sadder and sadder.  Yet I still feel it is important to remember.  Upon entering we visited the Tomb of the Unknown Soldier in the Hall of Memory and walked along the Roll of Honour the remembers those who died in the wall.  People stick poppies in the wall alongside names of families and friends.  I wish I had got some information so I could find my mum's uncles who are listed on the wall. 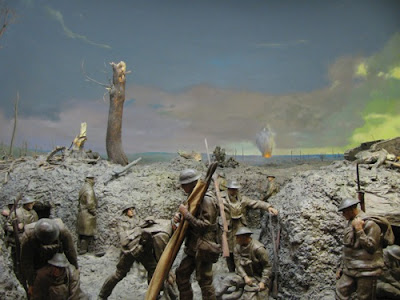 One reason I love the museum so much, other than its beautiful reflective entrance spaces, is the dioramas of World War I battles.  These models were created in the 1920s to help people get an understanding of war.  They are a wonderful historic relic in themselves that demonstrate old fashioned tools of museums that predate interactive touch screens and talking heads on tv screens.  The stories of war are amazing and I also love how the museum represents many perspectives.  I would have loved to have gone on a tour but my energy was taken up with chasing Sylvia and trying to convince her that the medals on an officer's uniform were not money.

We had a lovely visit to Canberra.  I am rather proud of our capital city.  If I had had more time, I would have loved to have visit more museums.  Alas, we were only stopping briefly en route to our main destination.  After an ordinary lunch of quiche and chips at the war memorial, we headed out of Canberra, narrowly avoiding ending up in Sydney after missing our turn-off.  After a few uncertain turns, we managed to make our way to Orange.