I have sorely neglected Nigel Slater's Tender.  I loved his Kitchen Diaries and Toast but life got very busy at the moment I was given Tender Vol I.  Enter some inspiration from the Cookbook Challenge, which has a different theme each fortnight.  I joined the challenge because I needed to spend some time with my cookbooks rather than being lazy and searching the internet.  It is working.  This fortnight, with the theme being soup, I decided it must come from Tender.  Finally I have broken my duck (to use a cricketing term)! 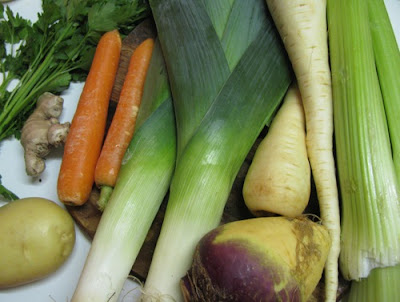 The soup I found was called Leek, Roots and Walnut Soup.  In this instance "root" meant jerusalem artichokes.  I thought this was perfect because Jerusalem artichokes are a winter vegetable.  It are not a vegetable I use very often but I was up for the challenge.  However, they were not about in the supermarket and I didn't have time to search them out in other places.  Instead I just collected a jumble of other root vegetables, assuming any root would do! 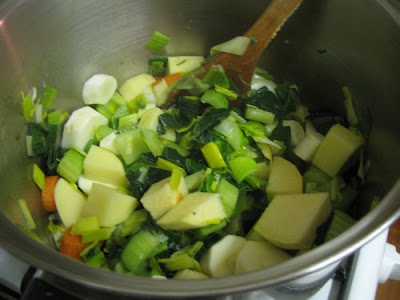 The vegetables were green and nice but nothing special.  They made a very tasty green soup without the spice topping but I would be bored eating the same soup every night.  However what interested me about this recipe was the idea of an ordinary mix of vegetables with an interesting spice topping.  It gave me visions of a cookbook with just one vegetable soup (well maybe one for each season) and many many versions of spice mixes.  Could I eat the same soup over and over if I added different spice mixes each night? 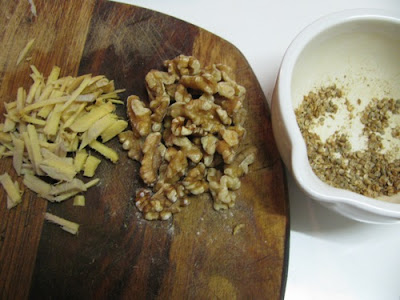 Unfortunately it was the spice mix that wasn't quite to my liking.  It was fragrant, tasty, interesting, but just a bit chunky for me.  I would definitely make this soup again and would love to try it with Jerusalem artichokes if I find some.  Next time I would chop the walnuts finely and just use ginger juice, as I have written below in the recipe. 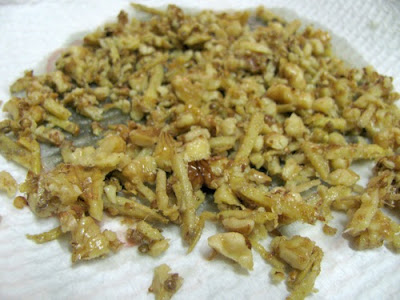 Yet again, I find inspiration in the Cookbook Challenge, as well as renewed appreciation for one of my cookbooks.  It has led me to the introduction of Tender that I merely flicked through when I first got it.  I must read it properly.

As an aside, I have just finished reading Eat Pray Love by Elizabeth Gilbert which was far better than I expected - a really interesting read if you don't mind a lot of navel gazing.  My current book is annoying me with comments such as the one about a brand of designer jeans that apparently everyone either has a pair of or wants a pair of.  I am not familiar with the brand and have no interest in it.  Maybe my precious reading time would be better spent with Nigel Slater!

To see what else my fellow Cookbook Challengers have made, go here.

Spice mix: make this while soup is simmering.  Grind coriander seeds with a pestle and mortar.  Nigel then bashed about his walnuts in the same mortar and pestle but I would just finely chop them next time.  He then cut ginger into matchsticks and fried with the coriander and walnuts in the oil for just a few minutes.  I think next time I would finely grate the ginger and squeeze out the ginger juice, leave out the oil, dry fry the walnuts and coriander briefly and add these along with the ginger juice to the blended soup.

On the Stereo:
Boy with the Arab Strap: Belle and Sebastian
Posted by Johanna GGG at 20:21