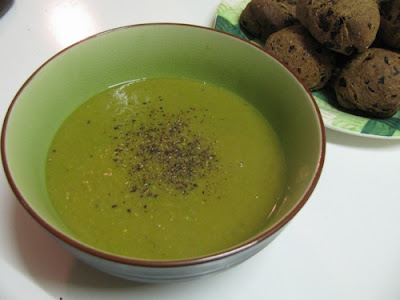 On the weekend I bought split peas at the Vic Market and I thought of Hannah from Wayfaring Chocolate.  This was where I first met her and I was buying the split peas to make a soup that she had recently posted.  I was also accompanied by a colleague who told me that leeks made split pea soup really smooth.  So I bought some.  I added lots of vegetables and it was fantastic. 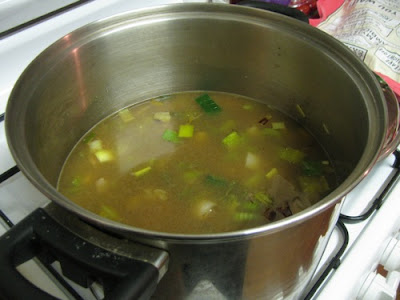 Potage St Germain sounds like a fancy soup but it was easy to make while Sylvia and E blew bubbles in the backyard.  Just as well because I had spent the afternoon making pumpernickel rolls which were hard work.  They tasted wonderful with the soup and I will post about them soon.  I let my vegies cook a bit long and used some dark home made stock.  So I was pleasantly surprised that my soup was still quite green. 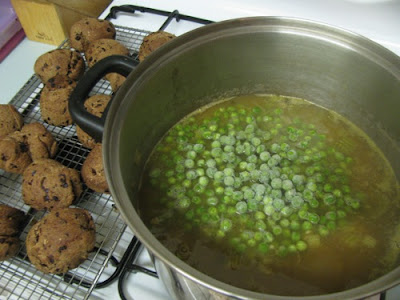 Hannah made the soup to look after her family during an illness.  I heartily agree with her that this soup has restorative powers.  Last week had its fair share of moments when I needed some cheer.  I dropped my fancy new water bottle of two weeks and broke it.  Being awake in the cold at 5am with a crying baby.  My mum and dad's old family dog was put down.  Nothing like a hot bowl of soup to bring a little comfort.  Thanks Hannah!

I am sending this to Preeti of W'Rite Food for My Legume Love Affair #38, the legume event founded by Susan of The Well Seasoned Cook.

Soak split peas in the water in a large bowl for at least 3 hours - overnight is fine.

Roughly chop vegetables.  Heat oil in stockpot and fry onion, leeks, parsnip, potato, celery and garlic, stirring frequently, until vegetables are softened.  About 5 to 10 minutes over low heat (I did mine a bit long as I got distracted and they stuck to the bottom of the saucepan).

Add undrained split peas and stock.  Check seasoning - it should be very well seasoned because once the frozen peas go in they will sweeten it slightly.  Bring to a boil, simmer uncovered, about 1 hour or until split peas are tender (skimming the surface and stirring occasionally).  Stir in frozen peas and gently simmer for about 10 minutes or until peas are tender.  Check seasoning.  A good grind of fresh black pepper is just the thing to finish off the soup.

Blend (and sieve if you want it ultra-smooth but I didn't and nor did Hannah).  Serve hot.