Around Orange - the vision splendid 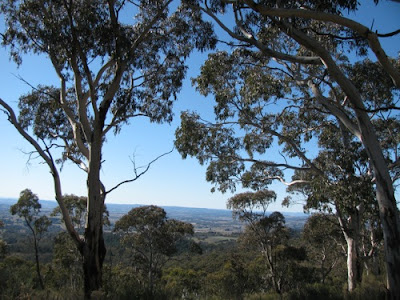 Photos don't do the countryside justice.  It was truly stunning.  The landscape was possibly the highlight of our recent trip to Orange.  The hills, dotted by grand old gum trees, rolled gently as far as the eye could see.  Though it was different from the crowded bush of scraggy rainforest gums that I grew up with, it felt quintessentially Australian.  Scattered throughout are some interesting eating places that we managed to visit. 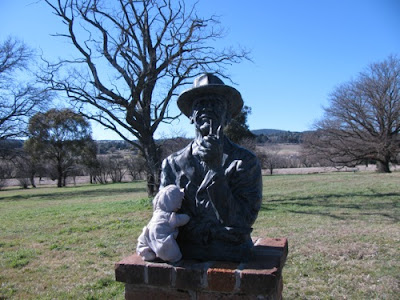 No doubt one reason that the landscape feels so familiar is that it is the birthplace of Banjo Patterson, the Eighteenth Century poet that every school child used to read.  We went the monument to mark his birthplace.  You can see that Dolly is a fan.  I recited some of Banjo's most famous poems to E: The Man From Snowy River, Clancy of the Overflow and sang a little of Waltzing Matilda.  He wasn't impressed.  He didn't grow up with bush literature.  The monument is humble but like Wren, it is a case of "look around you". 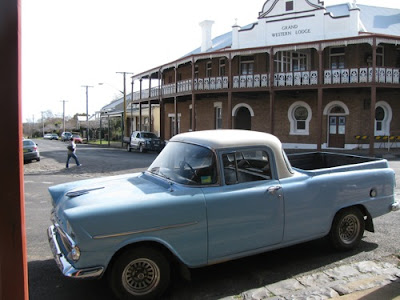 Orange is a rural city surrounded by many smaller historic towns in an area where gold was discovered in the 1850s.  One town that is worth a visit is Millthorpe.  It has well preserved historic streetscapes of cast iron verandas that house many gift shops and tea rooms.  Our favourite shop was Galvanised (see photo below).  It was full of funky retro lamps, rustic furniture, books and lolly jars.  We didn't leave empty handed but we could have spent so much more. 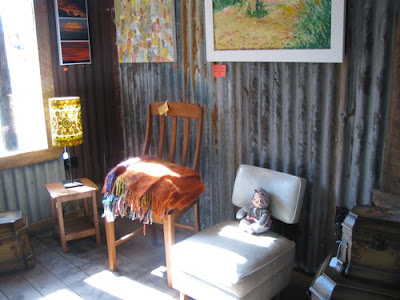 The place that we wanted to go for lunch was closed for a winter break so Fran suggested a pub down the highway that she had been recommended.  We found ourselves talking to an old guy at his gate where Sylvia and E were admiring his cat.  He gave us directions as well as some family history.  I will tell you about the Beekeepers Inn below but first I must highly recommend the Golden Memories Museum.  It had an overwhelming amount of information but there will be something for everyone.  Recreated bedrooms, crafts and a shed full of old machinery.  Sylvia insisted on staying in the main hall with one of the volunteers who was just lovely. 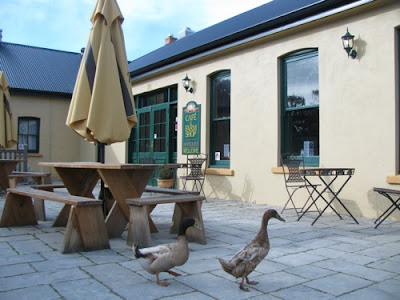 Down the highway was The Beekeepers Inn.  This was my favourite place of the trip.  We arrived to find a couple of ducks intimidating entertaining some brave souls who were eating outside.  The building was built as a hotel in 1859 and was a  Cobb and Co horse changing station until the railway line was built through to Orange.  I love the thought that in stopping on the highway for a meal, we were walking in the footsteps of our ancestors. 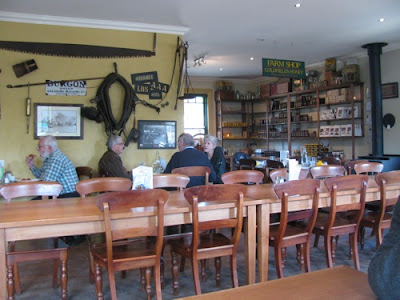 Today the Beekeepers Inn is a fascinating place offering meals, produce and antiques. It was a great place to go with Sylvia because the staff were great with her and there was so much for her to explore.  Admittedly I had to stop her picking up jars of jam and chutney and hiding Dolly in the cupboards.  She giggled gleefully as she ran up the hallway into the front rooms displaying antiques.  Lots of curious stuff for the adults to peruse as well.  Old crockery, advertisements, bottles, bicycles, dressers and even an old gramophone for E.  There is also a display on beekeeping and honey tasting because apparently the family who runs it keeps bees. 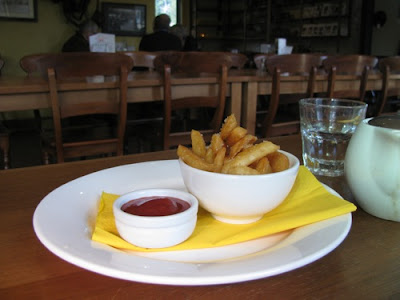 It was fortunate that we were staying with Fran and John so that in the evenings Sylvia could have some vegetables and protein.  During the day on our holiday, she mainly ate chips and bread.  I was very impressed with the crispy chips at the Beekeepers Inn.  Superb. Fran and E also had some on the side with their meals.  E had the big breakfast and Fran had a burger with gf bread.  All were very happy. 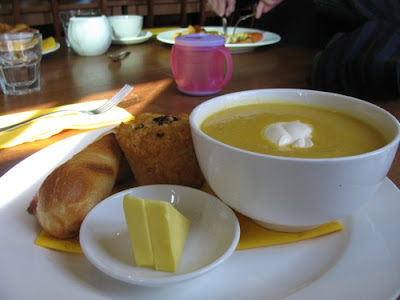 I was the difficult customer.  I ordered the carrot, parsnip and ginger soup.  It came with a huge blog of cream which I stirred in.  Big mistake.  My soup became a creamy concoction with a hint of vegetable.  It was too rich for me.  My olive, parmesan and chilli muffin was too spicy for me.  (Odd, you might think, given that this was my favourite cafe of the trip).  I gave up on the muffin but I asked for another bottle of soup without the cream.  It was fantastic.  It is such a joy to get a lunch that tastes predominately of  real vegetables when eating out.  The ginger was subtle enough to enhance the flavours rather than overwhelm them.  I think there was a handful of other vegetarian offerings on the menu and a few more on the bar snacks. 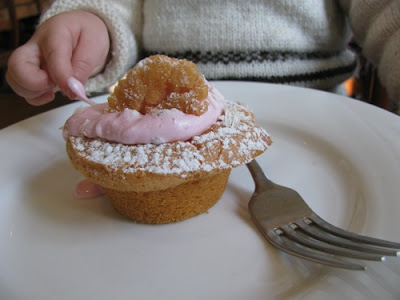 From the moment Sylvia and I went to inspect the cake display upon entering the building, Sylvia had one thing on her mind.  "Could I have a pink cake for Dolly?"  These butterfly cakes with pink icing did look spectacular.  Sylvia loved the pink icing (I think it had berries in it but can't quite remember) and ate quite a bit of the cake. 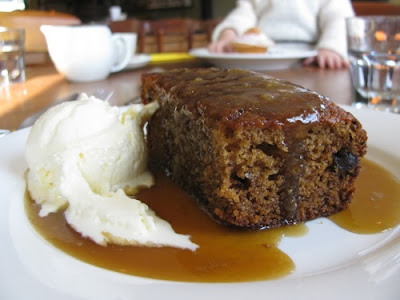 E and I decided to share a warm sticky date pudding with butterscotch sauce and icecream. It was one of the few cakes that wasn't in the cake display cabinet, so I had high hopes.  It surpassed them.  The speed at which we cleaned the plate was testament to just how good this was.  I have had some dry old sticky date puddings in my time.  This was soft as a pillow, moist, with the right amount of sweet sauce.  It was exactly as a sticky date pudding should be.  So good that I couldn't bear to taste Fran's gf carrot cake.  I just couldn't imagine any other dessert could taste as good. 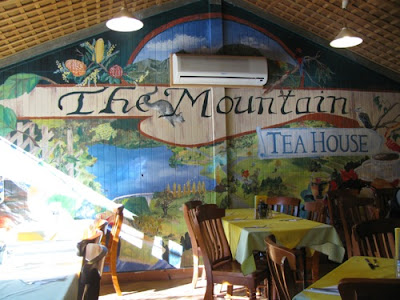 The other two places didn't quite live up to the Beekeepers Inn.  They were either great places with food that could be better or great food with poor service.  The former was the Mountain Tea House.  It is at the foot of Mt Canabolas, which has a great views you can reach by road (see top photo) and many walks.  The tea house is set in a beautiful bush setting.  We loved the space with the bright mural on one wall, a corner of tourist information, old advertisements, and a little display of gifts for sale.  (Though I could do without the evangelical Christian signs which are just not my thing, but they were not too prominent.)  The manager showed Sylvia to the box of toys but all she wanted was a highchair for dolly to sit in. 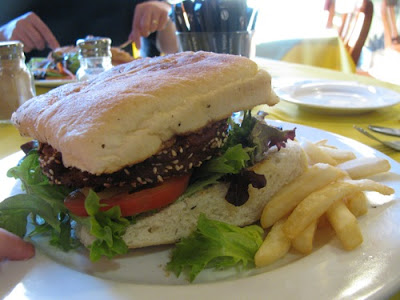 I was really pleased to be able to order a vegetarian burger and chips.  This is a standard item on many pub menus around Melbourne and sometimes is all I want.  I was surprised at the number of country places that had a range of burgers or pies or even foccacias without one vegetarian option.  My meal with pleasant without being great.  The burger tasted like a fried patty of mashed vegetables.  It came with tomato, lettuce, cheese and chutney, in a focaccia bun.  It would have passed muster if the chips had been more crisp and hot. 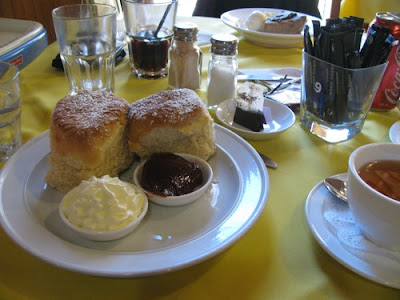 In a similar way, the scones were almost fantastic but they were let down by one component.  The scones were high and fluffy (though I suspect they were warmed in the microwave).  The cream wasn't too sweet and was piped in a pretty mountain.  The jam was a cold slab of tasteless sweet goo.  I mentioned this to my mum on the weekend as we ate her lovely scones with jam and cream.  When I commented that jam like hers would be lovely at the tea house, she said hers was from Orange.  Where is the support for local producers of some of Australia's fine fruit!  On a more positive note, E loved his caramel tart. 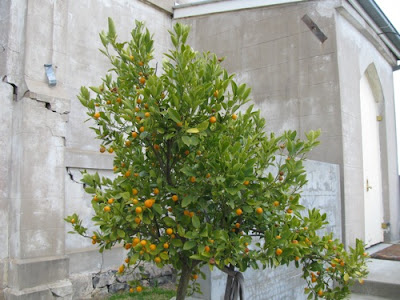 The last place I will tell you about is one that I have mixed feeling writing about.  The Old Convent had great food but the service and ambiance was sorely lacking.  Maybe it was an off day or there were pressures we were not aware of.  If only we had had a smile and a kind word, the experience might have been far better.  However we were a challenging group with a vegetarian, two gluten free and three kids.

As you can see above, Sylvia was warmly welcomed at most places we went.  The Old Convent is not really intended for kids, and I got the impression that they were not welcome.  My other main gripe is that I went there because I love old buildings (see photo above).  I was really disappointed to find we were seated in a lifeless new extension and when I asked about being seated in a cosy adjoining room with sofas and a fireplace, I was told no, because they had to clear the table.  We were worried the kids would want to run around and chose to eat outside on what was the coldest day of our trip.  Fran also commented that it was a shame they were BYO only and didn't support the plethora of neighbouring vineyards. 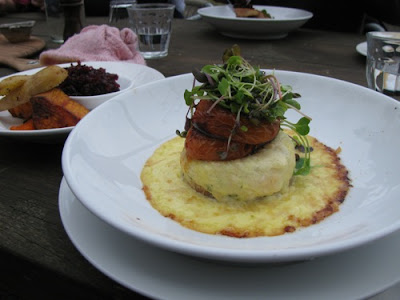 However I can't write off the place altogether because the food was very good.  We started with a soft baguette with dukkah and olive oil.  Then, as the vegetarian I was given two entrees (ie appetisers, if you are American).  This wasn't so bad given that there were only two entrees and two mains.  The pumpkin soup with coriander and cashew pesto was lovely.  A perfect marriage of flavours, that even won over my coriander-averse tastebuds.  This was followed by the twice baked feta souffle, which was served with roast vegetables.  The vegetables were nice, though I would have liked them to have been crispier.  The souffle was lovely but a tad rich and creamy for my tastes.  It was good to have the roast tomatoes and roast vegies to offset it.  They served the kids roast vegetables which was better than the chips Sylvia had at a few places.  Unfortunately, we didn't stay for dessert.

If you want to see a more positive review, check out Not Quite Nigella.  Our visit could have been better but it just felt like everything except the food went wrong for us.  We had to laugh about it, especially when E misheard the waitress telling him about a dish with duck and asked if she had said "dove".  But it was nice to go out and meet some of Fran's friends.