Coconut brittle, leftovers and a week of eats I had a good reaction to my sharing of a week of eating, a few weeks back so I am going to do it again.  It is useful to reflect and gives me a chance to talk about some of the highs and lows and leftovers.  Ironically both my best and worst dish came from a favourite blog, Diet Dessert and Dogs.  But first, let me give a rundown of meals from last week: 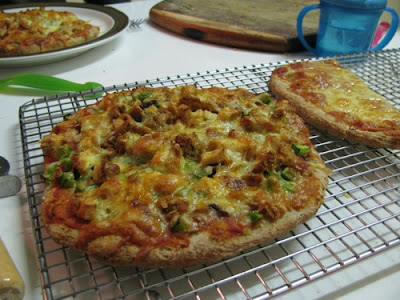 You will see that we did quite well with leftovers last week.  Leftovers help me retain some sanity in a busy week.  While the sun shone, we suffered a week of Sylvia having a nasty cold.  She wasn't eating well so I made tofu nuggets for her on Wednesday.  She usually loves them, but barely touched them last week.

For myself I made a sweet potato and red lentil soup.  It was a recreation of an old favourite recipe that I have lost.  As well as being dinner one night, it provided many lunches - I even still have a few tubs of it in the freezer - and then was part of our pizza on Friday.  I mixed some soup with tomato paste to spread on the base.  The topping was chopped tofu nuggets, mushrooms, green capsicum, cheese and smoked paprika.  I used bases from The Colour of Earth.  The pizza was substantial but might have benefited from the sweetness of pineapple to counter the intense flavours. 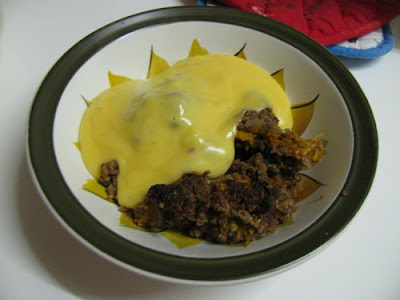 We haven't had a lot of desserts lately but after the pizza we had a crumble with custard.  It wasn't quite what I had planned.  This had started life on the Saturday as Apple Pumpkin Crumble Slice from Diet Dessert and Dogs.  It was intended as a gluten free vegan dish to take to a potluck at Cindy and Michael's place.  It all went a bit pete tong.  I substituted brown rice flakes for oats.  Maybe this was the reason that the crumble mixture seemed just far too wet.  It was a shame, given that the apple pumpkin filling was lovely.

I was poorly on Sunday afternoon and spent it in bed rather than sharing my slice at the potluck.  I was a little relieved not to have to take my slice along.  It wasn't great.  Too damp and dense.  Instead we put some in the freezer and some in the fridge.  So far I have only had one serve warmed in the oven and drowned in custard.  It was good but I loved the filling so much that I think this slice deserves a second chance, maybe with oats as Ricki intended!  Which is the reason that I have recorded what I did below. 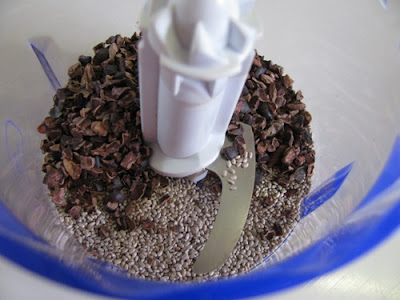 I have had a few failures from Ricki's recipes.  It struck me that I have had a few disasters from some of my favourite bloggers.  It seems a terrible thing to confess.  Yet I have also had heavenly dishes from these bloggers too.  That is the nature of being inspired by cooks who push my boundaries with new ingredients, diets and methods.  (Especially when I am gung-ho about changing the ingredients according to what I have, which doesn't always work.)  The upside is that when it works it is brilliant.  As demonstrated by my subsequent success with Ricki's Coconut Brittle. 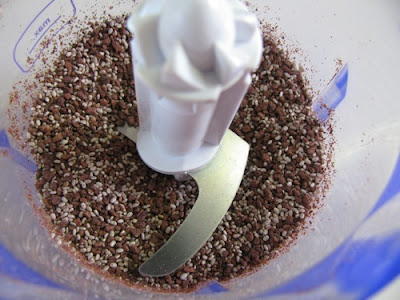 These above pictures are of the before and after version of cacao nibs and chia seeds.  Exotic ingredients that now grace my pantry, thanks to blogging inspiration.  They went into the coconut brittle.  As soon as I saw the recipe I wanted to try it because the ingredients interested me so much.  Then I decided to try it one night and discovered it needed 2 hours in a very slow oven.  It had to wait until I had time during the day. 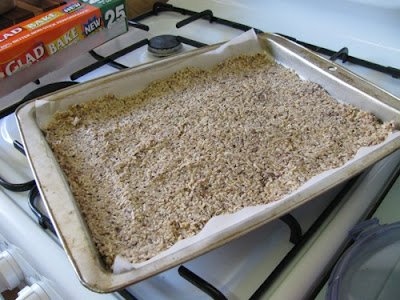 I made it last week when my friend Kathleen came for lunch.  Sylvia and I got the mixture together before Kathleen arrived and it cooked while we ate and chatted.  I made us salad sandwiches with grilled and sliced leftover tofu nuggets.  (Sandwich filling: tofu nuggets, mashed sweet potato, baby spinach, grated carrot, sliced tomato and vegan mayo on my olive oil bread, made with chia seeds, wholemeal and rye).  They were great.  For afters, we had chopped apple and a nibble of the coconut brittle when it came out of the oven. 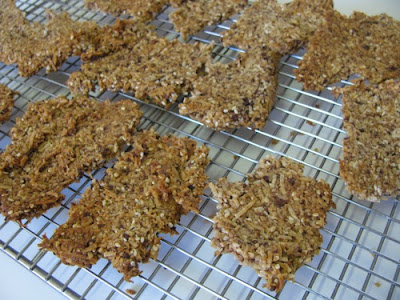 I loved the coconut brittle.  It was barely sweet, tasted slightly of fruit from the apple sauce but mostly tasted of coconut and sesame, two textures and flavours that I love.  I was surprised that it tasted a bit sweeter before baking than after.  Ricki says that it is great for travel.  I loved taking it to work for lunches.

The last thing to say about last week is that I finally got my Skype account on my computer up and running with my first video call to my sister Fran.  I have used it at work where we regularly meet with remote colleagues by Skype.  Using it at home seems quite an achievement for me - a Luddite at heart - in coming to terms with all the new technologies of our world.

Grind cacao nibs and chia seeds in a coffee grinder or blender (I used an attachment for my hand held blender). Place ground cacoa nibs and chia seeds in food processor with remaining ingredients and blend. I found that I needed to stir mine at the end because the food processor was struggling a bit. Spread paste into a lined lamington tin (13 x 9 inch). Cook at 120 C (I put mine on fan forced so it was slightly warmer) for about 1 hour or until dry and starting to brown. Cut into four and use an egg flip or spatula to flip over. Cook another 30-60 minutes, keeping an eye on it for when it gets golden brown. Cook and break into chunks.  Keep in an airtight container for at least a week (but don't store with cupcakes or it will soften).

Bake sweet potatoes whole in their skin for about an hour or until they feel mostly cooked (if not quite cooked, they will cook in the soup).  I think I did this while cooking the coconut brittle in a low oven but the temperature doesn't matter too much - just keep an eye on them every now and again so they don't burn.

Fry onion, celery and carrot in olive oil in a large stockpot for about 15 minutes until vegetables have softened. While vegetables cook, peel and chop sweet potatoes (mine had cooled which is optional but makes peeling them far easier).  Add remaining ingredients and check seasoning.  Bring to the boil and simmer for about 15 minutes or until lentils are cooked.  Blend.  Check seasoning (the soup gets sweeter when blended due to the sweet potatoes).  Serve hot.  Can be frozen.

Add the dry ingredients to the wet mixture in the bowl and toss with a fork until it comes together in a "very moist yet crumbly dough". (This is where I had problems - mine was very moist, even very wet, but didn't crumble at all - maybe I should have followed Ricki's instruction and used a fork instead of a spoon but it also looked a lot darker than hers.) Set aside while you prepare the filling.

To make the filling, mix together the pumpkin, apple, lemon juice, rice syrup and chia seeds (if using).

Bake in preheated oven for 30-40 minutes or until browned. Serve warm with custard or cool in tin and cut into 8 or 9 large squares. May be frozen.

On the stereo:
Breakfast of Champions (Soundtrack) - Martin Denny
Posted by Johanna GGG at 20:21