Besan Vegetable Frittata and a week of eats 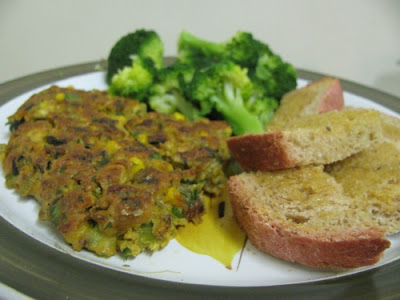 It has been a little bit Orange around here lately.  I can assure you that there I have been cooking up a storm since getting back from holidays.  Some has been great.  Not all.  I thought today that I would reflect on a week of meals and leave you with my version of my favourite meals last week - Yogi Kitchen's besan fritatta.

Here is the evening meals that we had last week: 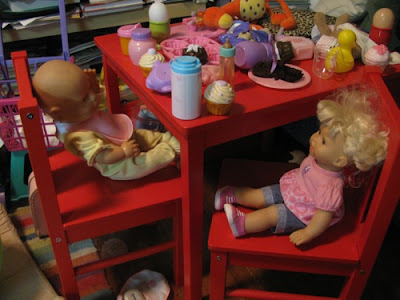 I am not sure I would claim this is a typical week.  We don't usually have so much of my mum's stews - though when we visit she often sends us away with leftovers.  Bangers and mash are our regular Monday meal that E makes.  I do try and have leftovers for busy days.  I also made other dishes that I will post about later - the potstickers (also inspired by Yogi Kitchen) and olive oil bread with chia seeds.

Breakfasts starred a lot of berry yoghurt with Carmen's gf deluxe fruit muesli and toast.  Lunches were lots of sandwiches and pears.  My worst lunch was a pie from a petrol station on a badly organised day and my favourite was carrot soup from Animal Orchestra in Carlton. 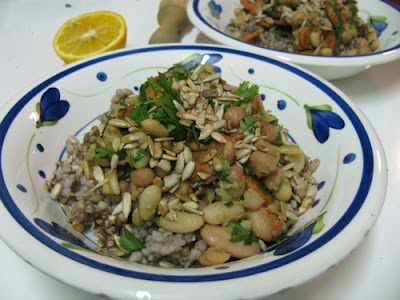 Above is the Bean and carrot salad which came from 101 Cookbooks.  I liked it but I didn't love it.  I made some changes.  I halved the sweetner (honey) which was a good thing.  I used too many sunflower seeds and I think walnuts would be better.  Most of all, I think it would be great to try the salad with fresh dill as Heidi did.  Also the buckwheat was too dry on its own with the salad but was great when it soaked up the tomato sauce of my mum's stew. 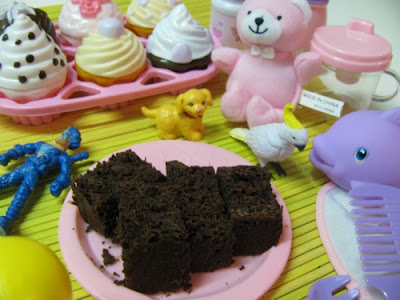 The other recipe that didn't quite work for me last week was a Beetroot brownie that I adapted from Kari's Bite Sized Thoughts.  I made quite a few changes and mine were more like cake.  They looked nothing like Kari's fudgy brownies.  I added some buckwheat flour and then read that it can dry out a baked good so I wondered if this was what happened.  I also added eggs and oil.  We all enjoyed it nevertheless. 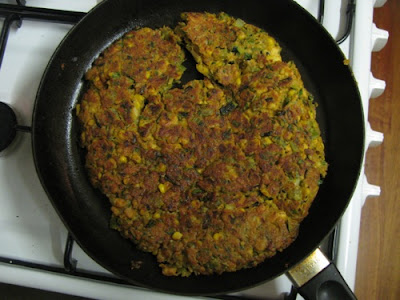 The besan fritatta was something that seemed simple and straightforward for a night when I am tired after work.  Yet it took me longer than I thought it should.  Convincing Sylvia to eat dinner takes a lot of energy.  She often will not eat her broccoli until reminded, at which time she will nonchalantly stuff it in her mouth.  Last week all she wanted in her mouth was a toy dummy that I bought her in a packet of doll's accessories for dolly - it had everything including a potty!

I changed some of the seasonings and vegetables.  I noticed that the besan mixture was slightly bitter and over-seasoned before mixing with the sweet vegies that added the balance it needed.  The most stressful activity was flipping the fritatta.  Never my favourite thing to do, it was even more difficult with a demanding child.  The sides on my frypan made it hard to slide the fritatta back onto into the pan.  It had a slight collapse but held together enough. 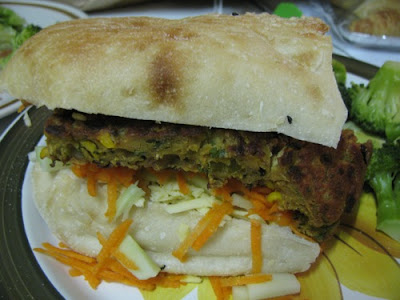 The first night I served it with steamed broccoli and pink chia seed bread.  (I used the drained liquid from tinned beetroots in juice instead of water when making the bread.)  The second night I had some fresh turkish bread rolls.  We served the besan frittata like a burger with chutney, mayonnaise, broccoli stalks, grated carrot, grated cheese and tomato.  It was delicious but as soon as I put my hands around the burger to take a mouthful, the cry went up from Sylvia: "cuggle, mumma"!  I don't remember what I did but I do know that I loved the burger.

Adam and Theresa suggest eating the frittata with rice or potatoes which would make it a great gluten free and vegan meal.  I had a wee taste of it when cold and would enjoy it on a picnic or as finger food.

I am sending this recipe to Ricki for her Wellness Weekends and to Jacqueline for her Bookmarked Recipes.

Previously on Green Gourmet Giraffe:
This time last year: Florentines, salads and what's in a name
This time two years ago: Carrot Cake and the Lost Sock
This time three years ago: Easy as Vegetable Pie
This time four years ago: Rumbledethumps: death to the red hag!

If using cashews, soak them ahead of time (I did mine overnight).

Before you start preparing the frittata, drain cashews, add 1/2 cup of water and add in chia seeds to soak. (This step is optional depending on if you decide to use cashews and chia seeds or not.)

Heat 1 tbsp of oil on a heavy bottomed frypan.  Saute celery, zucchini, capsicum and corn for about 5 minutes (or while you try and feed a distracted child).  Add spring onion and garlic.  Stir for about a minute.  I then turned off the heat and left vegies in hot frypan until I was ready to use.

While vegies are cooking, blend cashews and chia seeds with water until smooth.  (My mini blender is better for this than my food processor but the cashews are still a bit grainy.)  I then transferred to a bowl and mixed in the besan, nutritional yeast flakes, parsley and spices by hand (don't forget to add water if you don't use cashews and chia seeds).  You could also do this in your food processor.  Gently mix in fried vegetables.

Heat the frypan (I used the same one) over medium low with the remaining 1 tbsp of olive oil.  Pour the batter into the hot oil and use the back of a spoon to flatten into a large circle.  Fry frittata for about 5 minutes or until golden brown.  Flip onto a plate and slide back onto the frypan with fried side upwards.  (I didn't find this as easy as it sounds.)  Cook another 5 minutes until golden brown on the other side.  (Adam and Theresa said to cover but I think I forgot to.)  Serve hot or cold.

On the stereo:
Best of Martin Denny
Posted by Johanna GGG at 21:18