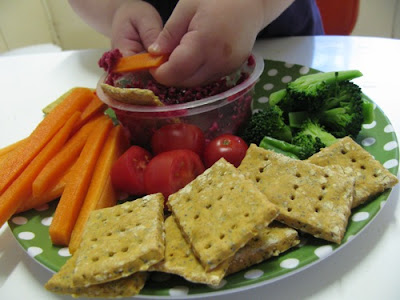 One good recipe leads to another.  I had a bit of time with Sylvia before dinner last week so we made chickpea crackers.  They were great.  Then I sat feeling blank about what to make for dinner.  I had little energy and a few vegetables in the fridge to use up.  The chickpea crackers from Lisa's Bike Bake Blog was so simple and delicious that I had a look at her index and immediately found a sweet potato stew that grabbed my attention. 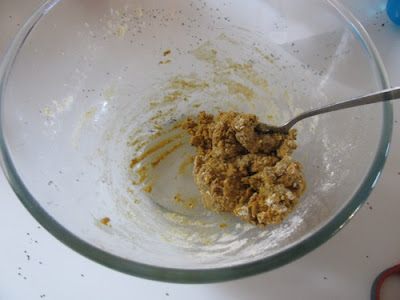 I got into trouble at first by following the recipe too literally.  The above sticky blob of dough just didn't look like it would roll out.  Yet I was foolish enough to try rolling it between two pieces of baking paper.  Then I came to my senses, scrapped it off the paper and returned it to the bowl where I added more besan (chickpea flour) until it looked like the sort of dough that would roll out (see below). 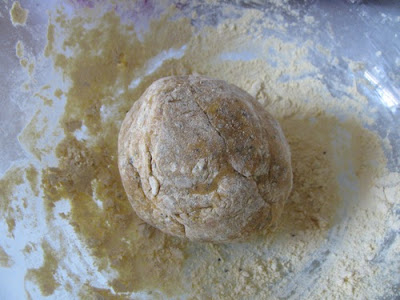 Once the dough was the right consistency, the dough was easy to manipulate.  I used different spices because I didn't have any fresh thyme on hand.  I also didn't read the recipe and broke the dough into individual crackers before baking rather than after.  I don't think this made too much difference. 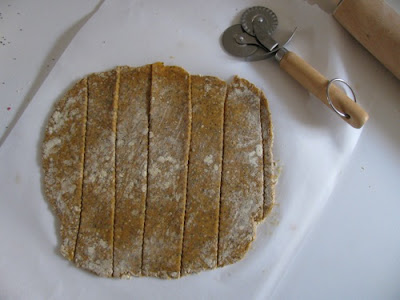 The resulting crackers were very moreish.  The tastiness of chickpea flour works well alongside the spices.  The texture was more crispy-even-slightly-chewy-dough than buttery-melt-in-the-mouth.  Not surprising with crackers containing only a little olive oil.  It is a texture that I quite enjoy.  Not only does it taste good but it holds together well.  Which is important when dipping in beetroot dip (or pink hummus as Sylvia calls it).  Sylvia loved them.  We all did. 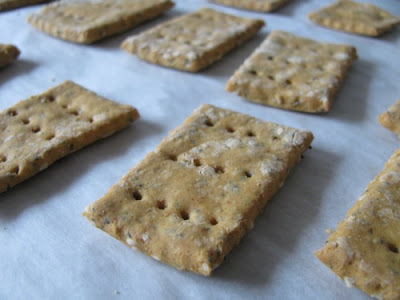 I am always delighted when Sylvia loves any of my recipes but last week she excelled herself.  Actually I decided to make these biscuits because she suddenly was enjoying hummus dip.  She also tried yoghurt with blueberries, hokkien noodles in mee goreng sauce, mushrooms on pizza, and a teensy weensy piece of toast with almond butter.  I don't mean she is eating all these things often - she is already turning up her nose at the yoghurt and preferring pink hummus to regular but it gives me hope. 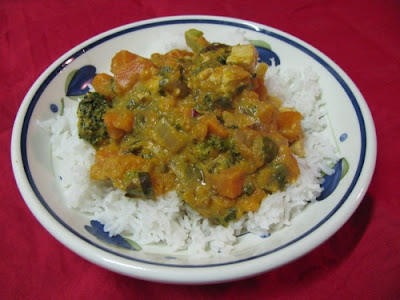 However I knew that the sweet potato stew would be too much of challenge for Sylvia's plain tastes.  It suited E and myself very well.  It solved the problem of what to do with my sweet potato but my eyes were playing tricks on me.  I mistook the white sweet potato for tofu and started wanting to eat tofu in a stew.  So I used it instead of beans.  The spices were so unusual that when I ate leftovers for lunch the next day a colleague came in to ask what was in it.  "Coconut milk, ginger, mustard, nutmeg," I guessed until she said a-ha at nutmeg.  Unusual but very very nice.

Chickpea and Seed Crackers
Adapted from Bake Bike Blog
Makes about 2 dozen
Preheat oven to 175C.  Place dry ingredients into a medium bowl and mix in the oil and water to form a soft dough.  Mine was a bit sticky and so I needed extra besan to shape it into a ball. (Remember there is less delicateness to gf flours so you can knead it.)

Roll out thinly between two sheets of baking paper I had to keep checking mine wasn't sticking and even sprinkled a bit of extra besan on the dough as I rolled it out.

Remove top layer of baking paper and cut into desired shapes with a pizza cutter or pastry wheel.  Prick each cracker with a fork.  (I broke mine into pieces at this stage but it was fiddly to do so I would prefer to leave as a whole piece of rolled dough with lines in it next time.)  Bake for 16 minutes or until golden brown.  Cool on a wire rack. and then break into pieces.

Update: remade these and got temp wrong - cooked at 155 for 11 minutes and then 175 for 10 and they were crisper than the first time.

Coconut Vegie and Tofu Stew
adapted from Bake, Bike Blog
(serves 3-4)
Heat oil in stockpot over medium heat. Fry onion for a few minutes until translucent.  Add ginger and spices and stir constantly for about 1 minute.  Toss sweet potato in spices.  Add water, milk, stock powder, pumpkin and tofu.  Check seasoning.  Bring to the boil and simmer for about 30 minutes.  Add broccoli and simmer uncovered for 5-10 minutes until broccoli is tender and sauce has thickened.  Serve with rice or noodles.

On the stereo:
Mellow Miles: Miles Davis
Posted by Johanna GGG at 21:00