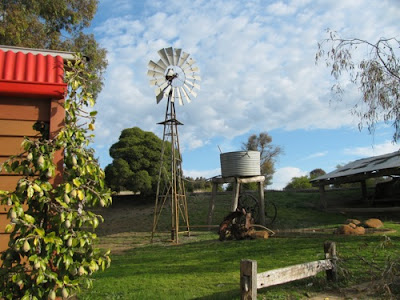 Neither E nor myself are that keen on driving.  We are both happy for someone else to take over the reigns.  So it was quite a big undertaking to drive to Orange to visit my sister.  We had three legs in the journey, mostly on the Hume Highway.  Melbourne to Canberra (about 6-7 hours), Canberra to Orange (about 3-4 hours), Orange to Melbourne (about 9 hours).  That's a lot of driving!

There was not much traffic.  Many stops and change of driver.  Lots of country bakeries and a couple of quirky lunch stops.  Travelling as a vegetarian with a toddler was a challenge that most places met with a smile.  We passed by windmills, parks, paddocks of cattle, museums, tea rooms, op shops.  If we had had more time, I would have stopped at many more places.  As it was, I have plenty to tell you, so maybe that was as much as we could fit in on this trip. 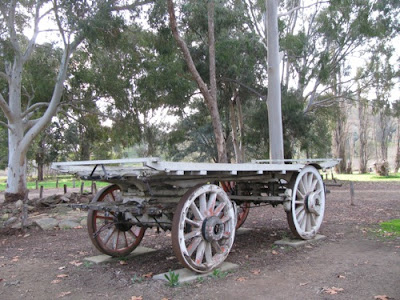 We started the trip in Melbourne on a cold wet grey morning.  I was really tired after a busy time at work coupled with Sylvia's broken sleeping at night.  In fact I was so tired I thought we might be lucky to get an hour down the road.  We got to Benalla where we stopped so E could have a coffee.  Hides Bakery had a great range of good quality food.  No cheeseymite for Sylvia so she had a coffee scroll.  E had a croissant.  I was impressed with my savoury muffin (spring onions, spinach, cream cheese, feta) which was delicious with a generous seasoning with pepper.  If it hadn't been so wet we might have stopped at the playground by the lake.  If we had had more time we might have spent time at the art gallery and cafe.  Instead we took our baked goods in the car and drove off without so much as a photo! 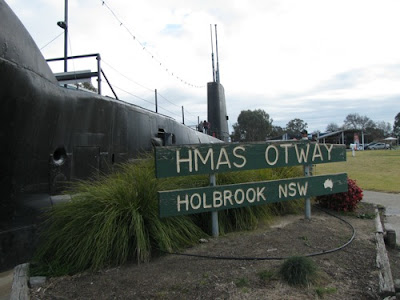 Next stop was for lunch at the Submarine Cafe in Holbook.  I thought there were a few other interesting tea rooms in the town but my mum had recommended it and the park by the submarine was a good place for Sylvia to have a run.  The dark overbearing submarine in the middle of this inland town was a mystery to us.  How did they get a submarine there and why fascinated us.  We didn't have time to go to the submarine museum to get any answers. 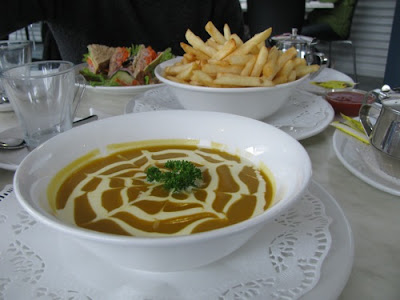 Mum had stopped at the cafe with my sister and her kids a few weeks before us and I suspect that the cafe met their needs for gluten free food better than it did my needs for vegetarian food.  I was surprised at how little vegetarian options were on the menu.  Sylvia had chips, E had sandwiches and I had pumpkin soup.  When I checked if the stock was vegetarian they asked if I wanted cream.  I said yes but it was a bit more cream than I prefer.  However with such a pretty presentation, all was forgiven.  This cafe was clean and welcoming in an old fashioned way.  Nothing fancy except the doilies, which incidentally made a very nice hat for dolly. 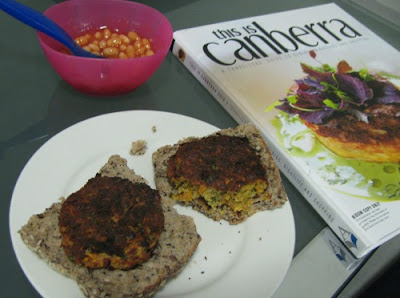 Our next stop was the Dog on the Tuckbox for doughnuts from Hides Bakery and a free tea for E.  However as we stopped there on the way back I will write more about that below.  After that we arrived at our destination in Canberra.  I had packed some food for the trip.  Pears, grainwave crisps, baked beans, carrot and tofu burgers, and bread rolls.  Enough for dinner. 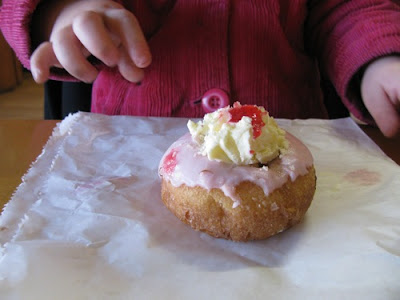 Two days later we set off for Orange after lunch.  This was the shortest drive of the trip and mainly on smaller roads than the Hume Highway.  We stopped for afternoon tea at the Superb Bakery at Boowora - so called because it was superb parrot country.  The baked goods had lots of icing and cream.  I asked if there were carmel slices and suddenly had one given to me in a bag, sight unseen.  The top layer of chocolate was too thin for my liking and I found it too sweet.  Sylvia loved her doughnut loaded with icing and sweet cream.  She wasn't sharing that with anyone.  E also had a doughnut but no cream.  I really liked the space inside the bakery with funky chandeliers and wall hangings.  Yet again, there wasn't much time to hang around 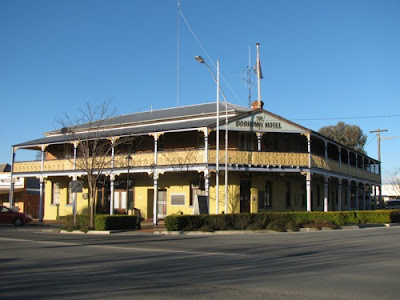 I would have loved to have tried the afternoon teas at the Magistrates Tea Room but taking the time for a leisurely stop was not a luxury we could afford.  I couldn't resist photographing the Boowora Hotel because it is typical of grand old country hotels in Australia.  Below is the close up of the beaituful detail on the balcony that reminds me of the great title of Hal Porter's Australian classic autobiography, The Watcher on the Cast Iron Balcony. 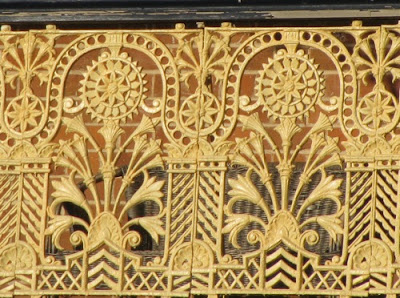 The next stop was Orange where we visited my sister and her partner.  One great advantage of a road trip is having our car to drive around Orange and surroundings.  A week later when we set out for home, Melbourne seemed a long long long way way. 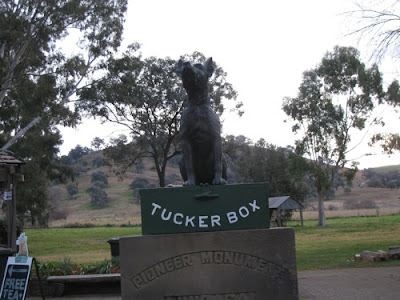 Determined to make up some time, given we had hit the road a little later than we had planned, our first few stops were at the side of the road.  Lunch was at the Dog on the Tuckbox.  Travelling with E who didn't grow up in Australia makes me aware that not everyone grew up singing "the dog sat on the tuckerbox 5 miles from Gundagai".  But for those who did, this Aussie icon, has great nostalgic value.  On the way we had enjoyed stopping here to see the statue of the dog on the tuckerbox and stretch our legs.  It was a picturesque stop with rolling countryside, an wagon (see photo second from the top) and ruins.  There were some signs to explain the history that gave some insight into the location. 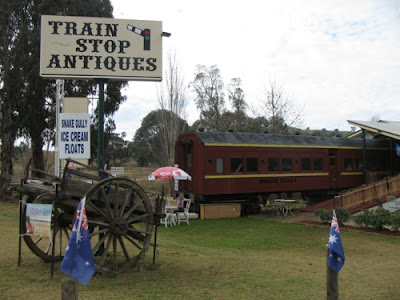 When I say lunch was at the Dog on the Tuckerbox, I mean it was opposite it at Train Stop Antiques and Cafe.  When we drove off the highway, intending to go elsewhere, I saw a sign offering vegetarian meals!  Inside an old train!  With antiques!  What is not to love about that! 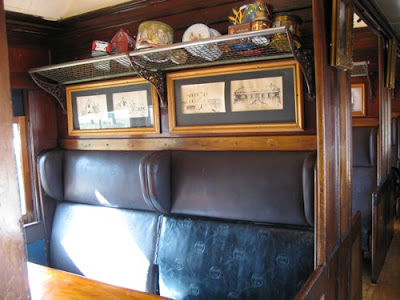 I was pleased upon entering the cafe to see that there were really old carriage compartments complete with the old leather seats and luggage racks.  The counter area also had a pot bellied stove warming the room, a display of home bakes, lollies, jams, chutneys and souvenirs.  There was a doorway into another train carriage jam-packed with antiques - crockery, pictures, books, vases, signs, toy cars, a violin and all manner of curious stuff.  When chatting to the guy behind the counter he said they had only been open since February and before that the train had been empty for a few years. 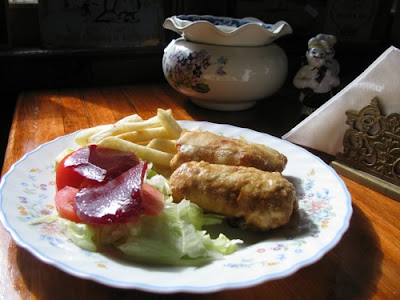 I hope they do well because this cafe had a good range of food for vegetarians, vegans and gluten free customers.  I had better options here than in many places on our trip - dim sims, pasta bake, nachos.  I chose the dim sims which were freshly fried and stuffed with cabbages and other vegetables.  They were served with chips and salad of lettuce, tomato and pickled beetroot.  E had a very filling burger with the lot and Sylvia had chips.  It was good honest Aussie home cooked food.  My meal was on the light side but really nice.  We also bought some lovely ANZAC biscuits to eat in the car. 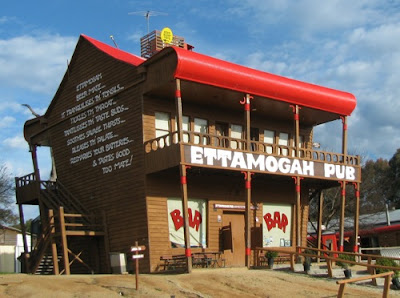 Towards Albury-Wodonga E developed a thirst for a cup of tea.  I thought he might get one at the Ettamogah Pub.  This is like a Disneyland version of the traditional Aussie pub.  However when were arrived there was no sign of life.  It was like being on a deserted film set.  The internet says it is still open so maybe they were closed between lunch and dinner.  There were no clues.  We left without satisfying E's thirst. 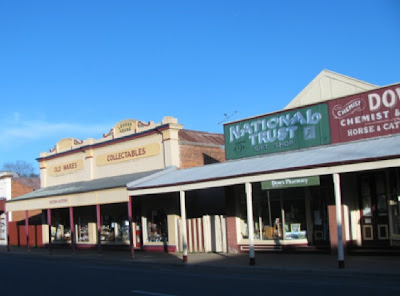 It wasn't until well after we had passed the Victorian border at Albury-Wodonga that we came to the Chiltern.  This is a pretty historic town that has been well preserved to reflect the heritage.  Upon entering the town there was a playground where I would have loved to stop and give Sylvia a stretch if we had had more time.  Instead we drove on into the main street. 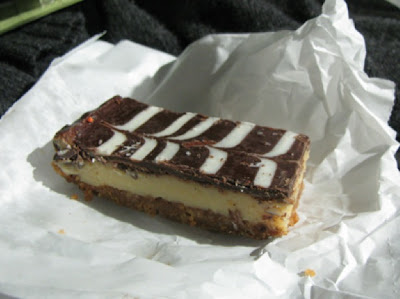 It was 4 o'clock by now.  We went into the Chiltern Bakery.  It was quiet.  The chairs and tables were packed up.  We didn't stop.  We bought a caramel slice for me, a cute little teddy for Sylvia and a cuppa for E.  The caramel slice was so good that I regretted not buying a loaf of bread to take home.  It had a chewy coconut biscuit base and a good ratio of biscuit to caramel to chocolate.  Best of all it wasn't ridiculously huge.  I hate to sound parochial but I did find that the bakeries on the Victorian side of the border were better than those on the NSW side.  Just look at those teddies! 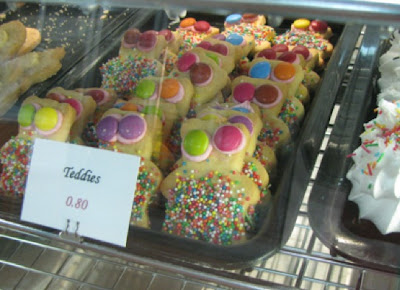 Our next stop - after a petrol station pitstop - was home sweet home.  We were very tired from all the driving but it was great to have seen more of the countryside.  The one place I would have liked to have stopped if we had had better timing was Glenrowan.  I also wish that bakeries had more savoury snacks.

After racing to get to our destination before dark (and failing) on each leg of the journey, I begin to understand the phenomenon of the grey nomad.  Once you have whizzed past these places in a hurry, it gives you a thirst for time to potter about in little museums and gift shops, to linger over a cuppa tea and a CWA bake, to stop at the side of the road and photograph whatever takes your fancy.  Spending more time driving around the country at your own pace has a certain charm.  Yet even our own little road trip gave a greater sense of the country where we live.