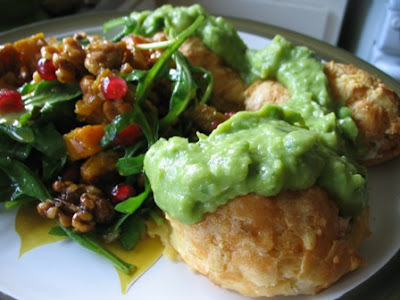 When I lived in vegetarian student households we would often have a vegetarian Christmas dinner to enjoy before we headed off to our meat-loving families where the turkey and ham ruled supreme.

I still love having this pre-Christmas dinner with E before heading off to a larger family dinner on Christmas day. These days, rather than savouring a vegetarian-friendly ambience, it is about

having our own dinner and an opportunity for me to try some fancy dishes. We are also more aware of the summer solstice occurring around this time and so it is more of a seasonal dinner than on Christmas day. A lighter dinner is welcome, given that we face a heavy dinner soon after.

This year we had our dinner on the weekend before Christmas. I decided to adapt Rose Elliot’s gruyere profiteroles with pea sauce. That’s right! Savoury profiteroles. We are quite partial to more traditional sweet profiterole - little balls of choux pastry stuffed with cream or custard and 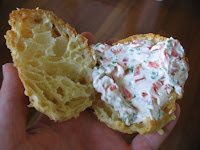 smothered in chocolate sauce. So I liked the novelty of serving cheesy versions for the main course. Rose also suggested serving them as finger food but if I was to do that I would want them smaller than mine were.

Choux pastry seems decadent and rich even though it is not terribly difficult to make. But I was wary enough of it to make sure I was prepared with all ingredients measured before I started. Mine puffed up nicely in the oven but cooled quickly. I changed the cream cheese filling from fennel to red capsicum and garlic. With a little parsley, the colours were 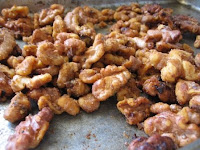 quite festive. The sauce I made was probably a little thick but pleasing, nevertheless. It was gloopy and smooth like mushy peas but fresher!

On the side, we had a festive salad, adapted from a Warm Pear Salad with Orange Vinaigrette and Spiced Walnuts in the Café Flora Cookbook. I added roasted pumpkin because I love it and pomegranate arils because they look festive. The walnuts were delicious when roasted with a fascinating blend of spices. When the orange vinaigrette was mixed with walnuts, the salad took on some of these flavours and became 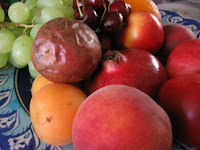 quite rich. But it was a fine accompaniment for the profiteroles which were simply flavoured with the cheeses and garlic.

For dessert, I was guided a little by circumstances. This year again, I had pudding crumbs from taking the cloth off the pudding, so I made condensed milk and pudding truffles as I had last year. I also made coconut ice to take down to the family the following day. Originally I planned to make a dessert in addition to these but, when I looked at how much food we already had, I decided that 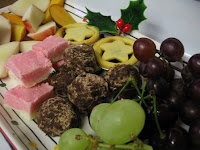 placing these in the centre of a seasonal fruit platter would be ample. I was so full after the main course that this platter was more than enough.

After our dinner we sat by the Christmas tree and watched the Polar Express while we continued to nurse a drink and nibble on the dessert platter. Good food is indeed one of the pleasures of Christmas! 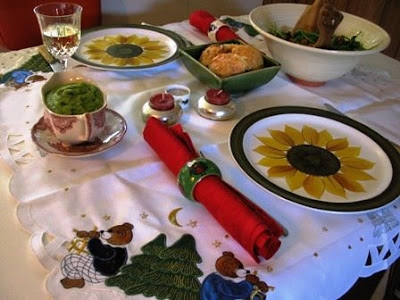 iPreheat oven to 200 C (400 F). Gently heat butter and water in a medium saucepan till butter 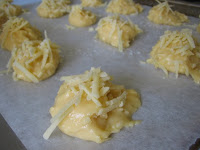 is melted then bring to the boil. Remove from heat and add flour, beating well with a wooden spoon. Return to heat and continue beating for 1 minute until dough leaves the side of the saucepan. (At this point it says to tip dough into a clean bowl but I forgot and continued in the saucepan). Add eggs half an egg at a time and beat each time till mixture has absorbed egg and is smooth and glossy (it may look a bit curdled when you first add it but will became smoother as you stir it). Stir in ⅔ of the gruyere cheese. Line a baking tray with baking paper and sprinkle with some water (apparently the steam will help the pastry rise). Drop spoonfuls onto tray and sprinkle with the rest of the grated cheese. Bake for 30 minutes or until golden brown and puffed up. 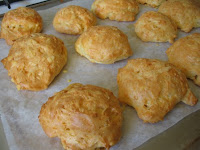 When they come out of the oven, immediately pierce with a knife to let the steam out so they don’t go soggy.

To make pea sauce: Melt butter in a small saucepan and fry shallots and potato for about 10 minutes, covered. Add peas and water. Boil and simmer about 5 minutes. Add basil. Blend with hand held blender or in food processor. Season to taste. Add more water if it is a little thick. Can be made a few days in advance and rewarmed when ready to serve.

To make filling: Mix all ingredients together and set aside till ready to fill cheese profiteroles. Keeps for a few days in the fridge.

To assemble: Cut warm profiteroles in half and spread filling thickly in middle and then replace other half on top. Serve with warm pea sauce.

Pumpkin, Pomegranate and Orange salad with Spiced Walnuts
(adapted from Café Flora Cookbook)
Serves 4 as side

Chop pumpkin into small pieces. Place in roasting dish, drizzle with a little olive oil and add a 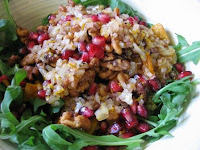 pinch of salt. Toss so it is covered in oil and roast for about 40 minutes at 180 C or until pumpkin is cooked. Set aside to cool to room temperature.

Toss pumpkin, rocket, pomegranate arils, spiced walnuts and vinaigrette together in a large bowl and serve.

Preheat oven to 350 F (180 C). Toss walnuts and oil in a medium sized roasting dish. Add remaining ingredients and toss to coat evenly. Roast in oven for 10-12 minutes until crisp and brown, stirring halfway through. Keep an eye on them as they can burn easily if left too long. Cool before serving.

Place all ingredients in a small bowl and whisk together (or shake together in a jar).

LEFTOVERS NOTE: There were plenty of leftovers for the next couple of days. I learnt that choux pastry does not reheat well in a microwave. When we finished the profiteroles the next night (NB I didn’t fill them til just before we ate them), we had plenty of sauce and filling still leftover so I served the sauce with potato pancakes (inspired by Lisa and Ricki) which were ok but not great with it. More successful was using up the cream cheese filling as a spread on toast.

We also have walnuts leftover because I thought the amount made was too much for the salad. I used these to garnish a chestnut, parsnip and orange soup but they would be great as nibbles before dinner or as part of a festive platter. The recipe advises making them a few days in advance so the flavours permeate the nuts.

I also made an Apricot, Pomegranate and Orange Smoothie out of the fruity leftovers.

On the stereo:
Christmas: Low
Posted by Johanna GGG at 12:53