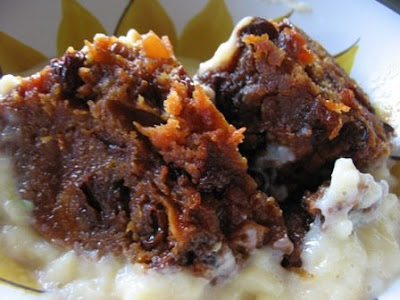 Last year I made the Christmas pudding for my family and posted the recipe and notes here. I think it was my second year making it. This year I made the same pudding again and found my notes very helpful. But I am still feeling quite a novice with much to learn so I am posting some reflections on this year’s pudding and on the further challenges I have faced in my quest to be a domestic goddess.

Firstly I had to contend with Zinc climbing the fly wire door in an effort to get outside and E playing gloomy neofolk music – I am sure these two things aren’t at all related. However, E finds the pudding such a drama that I am sure he would claim it was driving him to play such music. Honestly, the pudding is like another personality living in the house in the weeks up til Christmas!

Soaking the fruit the night before isn’t too difficult but this year I found the liquid seeping through a large crack in the pudding basin. I added a little extra alcohol to compensate when it came to mixing the pudding. Sadly the bowl has had to go, so next year I will need a new one because my other mixing bowls aren’t big enough.

My main problem last year was trying to produce a pudding with the floured crust intact. This year I failed again but felt I got a little closer to success. It 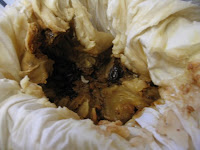 was only when I talked to my mum after cooking the pudding that she pointed out that I should be boiling it not steaming it if I cooked it in the cloth. Apparently boiling it helps to make the crust which in turn protects the pudding against water seeping in. I have a fear of immersing the pudding in a large saucepan of boiling water and it becoming watery mush but when I faced my fear this year, it worked fine. The pudding held together and tasted great - a rich, dense and moist mass of fruit.


I even managed to get the flour to stick to the cloth this year by spraying it with water after sieving flour on the cloth. I used rather a lot of flour (a couple of cups I think) which is much more than I observed my mum do when she floured the cloth to wrap the pudding for boiling on Christmas day – so I am not sure if my pudding cloth was too dry or if I was using too much flour.


Once the pudding was cooked I was worried I had to dry the cloth really well and so it hung for a couple of days before I dared to peel the cloth off. But by the time I did the floury crust was very dry and stuck to the cloth. So next year I think I need to heed the instructions in my cookbook which say to take the cloth off after the pudding has hung overnight. But as with last year, I scraped the pudding crumbs off the cloth and used them to make truffles.

The other trial I faced was finding a pudding cloth. I found one in a store midyear and put it away for when I made the pudding. It was nowhere to be found so I tore up another old pillow case. It was only a week or two after making the pudding that we pulled out our Christmas tree decorations and found the pudding cloth stored away with them. Not very smart of me, given I make the pudding before we decorate the tree!

There are many other interesting variations on the Christmas pudding throughout the blogosphere so if you want to see recipes other than mine, here are a few:

Rum and Craisin Christmas Ice Cream Puddings – Not Quite Nigella

Heilige Tod: a tribute to Death in June – Various Artists