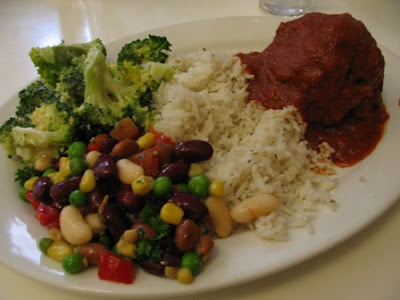 If you walk along busy Swanston St in the heart of Melbourne city, you will come to an unassuming door with a little semi-circular red awning above it saying Gopals. Many will pass right on by without ever noticing it. Some of us will walk up the stairs to the light and airy cafeteria on the 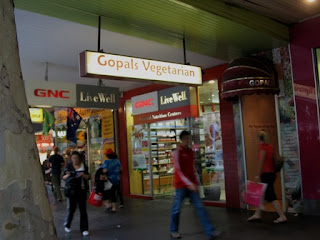 first floor for a cheap nourishing vegetarian meal cooked by the Hare Krishnas.

Gopals is more home cooking that haute cuisine. The customers grab a tray and choose their dinner at the counter. The bain marie is filled with mild vegetable curries, thin but tasty lentil soup, koftas, creamy lasagne, rice and samosas. Moving your tray along you will find a choice of healthy salads and cakes. The food makes me think of wholesome 1970s vegetarian cooking. A far cry from the hip bars with modern vegetarian dishes that are either brilliant or try-hard. It has been a constant comfort in a city that thrives on change. 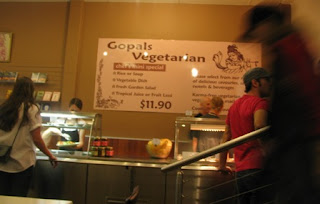 I visited a few times when a student but in more recent times it has become a favourite place for us to find a quick, cheap and healthy meal before we head off to a film. E likes the special of lightly spiced vegies, rice and green salad. I particularly like the broccoli and carrot salad with tahini dressing. It goes with everything: the vegies, the lasagne, the kofta balls or just some bread and other salads.

We were at Gopals last week before heading off to the movies. I’ve taken a few photos during other visits some months ago – of the spiced or sabzi vegetables and the lasagne. But last week I had 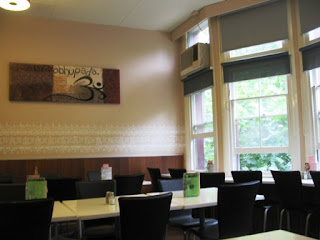 the kofta (spiced vegetables with a chickpea flour coating and lots of tomato sauce) served with rice, broccoli salad and a bean salad. Unpretentious but satisfying.

It was a while since we had visited. I regret to say that Gopals is changing. On our most recent visit it seemed less of a religious kitchen and more of a commercial business. Gone are the brightly coloured pictures of Krishna on the walls. Apparently you can also see them in the second floor dining room – so I am told although only the first floor dining area is open when we visit. In there the walls have a mystical white on beige pattern and modern art. The staff no longer look like they are Hare Krishnas ducking out from prayer time to serve you. The chairs are a bit softer. The prices have risen slightly.

But it retains some of its cheap and cheerful charm. The prices are still comparatively low and the food remains tasty and just a little foreign. The business card claims they serve ‘pure vegetarian & vegan food cooked with love and devotion’. And you can still sit at the large 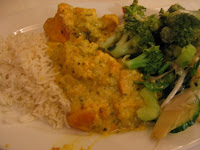 windows overlooking leafy trees and the bustle of Swanston Street.

After eating well at Gopals we went to see Australia at the cinema. It probably would get the award for the most hyped movie of the year. But we couldn’t resist. Indeed, it is a big bold movie of gorgeous photography and rugged romance. I hope it will open Australian and foreign eyes to the bombing of Darwin during World War II and to some of our Aboriginal heritage including the Stolen Generation.

Nevertheless, I have some reservations about the movie. Using stereotypes such as the noble 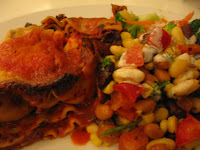 savage standing on one leg holding a spear make me a little wary of the portray of Aboriginal people. I can’t help but question why this film, which purports to be a great Aussie movie, is about an Australia that is quite foreign and exotic to most Australians. Even more jarring are some elements of the film which seem more American than Australia. Sigh! I recommend you go see it, suspend your disbelief and enjoy it but remember to beware of believing this story to be all fact.