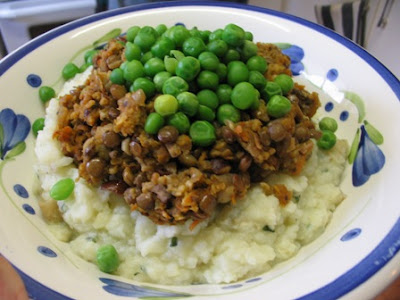 It was St Andrews Day last weekend. That’s right – St Andrew the apostle and patron saint of Scotland. You might recognise his saltire which is on the Scottish cross (see my photo). If you haven’t seen the flag itself then you probably will recognise it as part of the Union Jack. St Andrew was said to have been martyred on just such a cross. I confess I don’t know much about 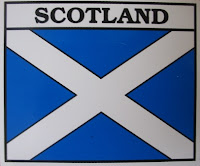 him nor does E. But it was just the excuse he needed to put in a request for some haggis.

For me, it was an excuse to gently suggest we listen to something other than Current 93 which is E’s latest fad on the stereo. He did try and justify it because apparently the band has spent some time in Glasgow. Then we listened to the Twin Peaks soundtrack which he justified on the grounds that the series was shown on the telly in Scotland. Finally we got into the swing of some proper Scottish bands like Belle and Sebastian, Franz Ferdinand and Scottish supergroup The Reindeer Selection. E couldn’t resist some Strawberry Switchblade who he has rediscovered because it includes Rose McDowall who hails from Glasgow and sometimes guests with Current 93. Once he is fixated on a band, it is hard to escape!

But he did get his haggis and we played some more traditional pipe bands while we ate. The recipe I used is different from the vegetarian haggis I have been making the last few New Year’s

Eves. Unlike my regular recipe, it does not use nuts nor is it baked. E swooned when he ate it. I was happy with it but prefer my nutty recipe.

I’ve never had meat haggis but it always looks a little like mince meat to me. This recipe was still a very flavoursome and interestingly dish as any mince I have ever had. It had a spoonful of garam masala but I think I would try it with half that much should I try it again. It does take a bit of organisation with all the soaking and chopping. The recipe comes from Henderson’s restaurants in Hanover Street, which is one of Edinburgh’s fine vegetarian institutions.

The traditional way to serve haggis is with neeps and tatties. This recipe suggested serving with clapshot which is mashed potato and turnips. At this time of year turnips (neeps) are not in 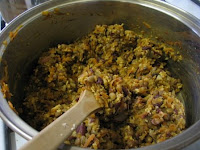 season and the orange ones which the Scots refer to (a.k.a. Swedes or rutabaga in other part of the world) were not to be found so I had to make do with a white turnip. I had to have some sort of green veg. E spurned suggestions that brussels sprouts would be traditional and we ended up with peas. But he did stick with the time honoured pub ritual of drowning his meal in tomato sauce from a bottle.

We had a fine Scottish meal followed by shortbread. As he ate his last mouthful of haggis, E said he hoped he wouldn’t have to wait for St Andrews day next year to have haggis again. His hint has been duly noted.

Once your ingredients are soaked and finely chopped (which takes some time and organisation), heat some oil in a frypan. Fry the onions, carrots and garlic til soft (5-10 minutes).

Add lentils, garam masala, soy sauce and water (or stock). Simmer for about 20 minutes or til lentils are soft and water has been absorbed. Add mushrooms and cook a few minutes til soft. Add kidney beans and margarine and cook another minute. Finally add oatmeal and cook til heated through. The oatmeal should retain its texture.

Serve hot with neeps and tatties and sauce.

On the stereo:
Scotch Mist: Various Artists
Posted by Johanna GGG at 20:37